Critical Roles of Networking Technologies in London and Singapore

London is one of the many smart cities in the world. The technologies and innovations that are used to run the operations of the city is very critical. There are smart networking technologies that increase the effectiveness of transportation, business operations, public safety, environmental duties and many more. According to Campbell (2018) “London is the tech capital of Europe; by size, level of investment and the presence of more than a third of Europe’s billion-dollar ‘unicorn’ companies.

Don’t waste time
Get a verified writer to help you with Critical Roles of Networking Technologies in London and Singapore
Hire writer
$35.80 for a 2-page paper

The capital is home to 46,000 tech companies, supporting 240,000 jobs in an ecosystem worth an estimated $44bn. This has grown at pace; between 2006 and 2016 London’s digital sector recorded 77 per cent employment growth and a 90 per cent rise in the number of digital enterprises. And business is booming too; with tech turnover reaching £56bn in 2016, measuring a 106 per cent increase over five years.” (p.8). Therefore, the city of London is at first hand access to some of the world’s best technologies and information regarding new technologies.

Afterall, it resides within a first world country.
Campbell (2018) Stated “London is also home to many cultural, academic and civil society institutions that are thought-leaders in this field. Examples include the Open Data Institute, Nesta, the Catapults and London’s internationally recognized universities and innovation centers” (p.8). The smart city of London produces tons of data by the second. Therefore, data storage, data security, and data redundancy are primary factors in maintaining the smartness of the city.

The city data is captured and carefully analyzed to aid in making critical decisions such as where to build schools and other infrastructures. To explain this data analyzing much deeper; the government of private sectors may use the data obtained from air quality sensors to decide where and when is air quality at its best. Bering that schools are places where people go to learn and obtained qualification that are critical to their path in life; the entity building the schools would want to ensure they are in healthy areas. However, there are other data that can be analyzed to conflict the decision of not building the school in the areas of low area quality. Such a data maybe, data about future developments or change in the density of an areas. Data analysist may predict that the areas where the air quality is poor is because of the high density of factory in the area. However, marketing data may show that the factories will soon be in bankruptcy and have to close down. Then the entity making the school may decide to make the school in an area now plagued by poor air quality because in a period of months, the causes of the poor air quality will be stopped. This technology is known as the London Data Store. Campbell (2018), stated “The London Datastore is an internationally recognized open data resource with over 700 datasets that help to address urban challenges and improve public services” (p.9).
In addition, London also invests in technologies that use the Datastore for the sustainability of the environment and the entities that resides in the environment such as humans and crops. “London is a leader in new \'Cleantech\' products, such as sensors that create data in new ways to combat the causes and effects of pollution and climate change” (Campbell, 2018, p.10). Air quality is a big factor in London. London uses a large network of air sensors and other devices interconnected by a computer network to monitor the air quality. The data is obtained to identify where and when a certain type of gas is common in the atmosphere such as oxygen or greenhouse gases. The findings maybe that areas of motor vehicle operations and high density of people produce more greenhouse gases than green spaces. In addition, London also have other environment monitoring networks, such as networks that monitor when the place is hot or cool, where the most of light energy is penetrating to. Data like these can be used to decide when to house public and outdoor events, and also when to rotate the natural energy productions systems in the city; such as solar panels and greenhouse spaces.
However, there are many more collections of technologies and datasets that are used for other operations in London such as bankcards for transportation. Campbell (2018) stated “Transport for London’s (TfL) track record is a particular strength for London; technology and data underpin everything that TfL does. From controlling the movement of trains to designing future streets using virtual reality, technology drives all aspects of its business. Vast amounts of data are generated on the Underground and the city’s streets. This data is used to improve services. TfL has an open data portal and a Unified API for developers to create services and products. These generate an estimated annual economic benefit and savings of up to £130m a year. Since 2014, TfL has also played a crucial role in contactless payment.” (p.10,11).

Singapore is one of the many smart cities the world contains; it is located on the continent of Asia being an island-city-state. The diversity of network technologies and the critical roles they play in the Singapore is massive. As a result, Singapore is often referred to as the city of the future. Singapore is a prodigy of smart surveillance systems, smart buildings and infrastructures, smart transportation, smart environment systems, smart energy and many more smart features. The population of Singapore is massive and the citizens needs housing areas to resides. The government of Singapore practice smart housing to facilitate the levity of its citizens in regards to environment sustainability. A series of smart technologies is used to achieve this; such as computer simulators for smart architecting, smart planning and other factors.
Computer simulations are used to predesign the city buildings and infrastructures and to test different theory digitally, rather than bidding on a dice scenario. The computer simulators use data captured from computer networks within the city such as air quality monitor systems, public movement monitoring system, disasters management, awareness and preparation systems and so on. These data can be feed into the computer stimulation system to create virtual reality. The system can then determine where to place building that will not decrease the level of air flow and air quality. In addition, the system can be used to ensure infrastructures are built in areas less vulnerable to both natural and manmade disasters; such as how well these infrastructures will combat an earthquake, a hurricane, a tsunami, or a fire, a bombing and other manmade disaster.
The computer simulation system and other networking technologies are used to protect the city from disasters also. In the case of an earthquake, the computer simulator can copy the effect into the digital pictograph of the city. The simulators will show whether or not spacing between buildings and infrastructures are critical to the city withstanding an earthquake. Not only a computer simulator can be used to protect or decrease the possible effect of an earthquake on Singapore; a network of sensors and other technologies can also be used to sense when the concerned tectonic plates are shifting or when unusual activity are taken place that has the potential to trigger an earthquake. Such an unusual activity makes be high tidal waves and massive impacts on the ocean beds, or even air quality sensors sensing greenhouse gases related to volcanic activities. These data can then be used to warn the city and prompt the government and other concerned entities to take the necessary precautions. In the case of a hurricane, the integration of computer simulations, smart energy technologies and smart environment technologies may be facilitated to achieved safety for the city. The computer simulator may be used to determine where are the critical points to build high firm buildings to break windspeed if a hurricane should strike. The smart energy technologies can be used to test windspeed and the environment reaction to the different level of windspeeds and water load. The simulator can be used again to test the different data in theories such as what mass of water the drainage system can transport out of the city and what mass of water the city recycling technologies can put to ethical use. The computer simulators can also be used to mimic the occurrence of a tsunami and how well the positioning of buildings and infrastructures will allow such massive amount of water to not remain stagnant on the land.
In the case of manmade disasters such as fire and catastrophe of war; smart building and infrastructures are well equipped to face the threats. There are a collection of smart building and infrastructure technologies that allow these threats to be quickly apprehend. Sensors, alarm systems and thermal cameras are among these technologies. In the case of a fire, a computer network consisting of smoke sensors, water sprinklers and automated fire extinguisher are a part of the buildings in Singapore. The smoke and thermal heat sensors sense the presence of smoke and head, then send the signal to the server on the network; depending on the mass of smoke the smoke sensor sensed, the level of abnormal heat the thermal heat sensors sense at same time the smoke sensors sense smoke, and the amount of floors or blocks the threat is on the building, the server send the signal to turn on fire alarm that will automatically prompt the fire stations and also prompt the water sprinklers and automated fire extinguisher to turn on and tackle the fire. The infrastructure in Singapore are also built with smart evacuating features to facilitate safe exit from the location. In the case of a bombing, similar protocols are followed; and thermal cameras are used to pick out the thermal radiation that certain components of a bomb give. This can be used to stop potential bombers.
Singapore faces low quantity of land and are using technologies to increase their landmass where no land has been before. According to National Geography (2018) “Singapore Urban Redevelopment Authority is in charge of identifying the future needs of all Singapore’s land” (5:40-5:49). The Singapore Urban Redevelopment Authority creates land through a process called Land reclamation.

Critical Roles of Networking Technologies in London and Singapore. (2021, Oct 31). Retrieved from http://envrexperts.com/free-essays/essay-about-critical-roles-networking-technologies-london-and-singapore 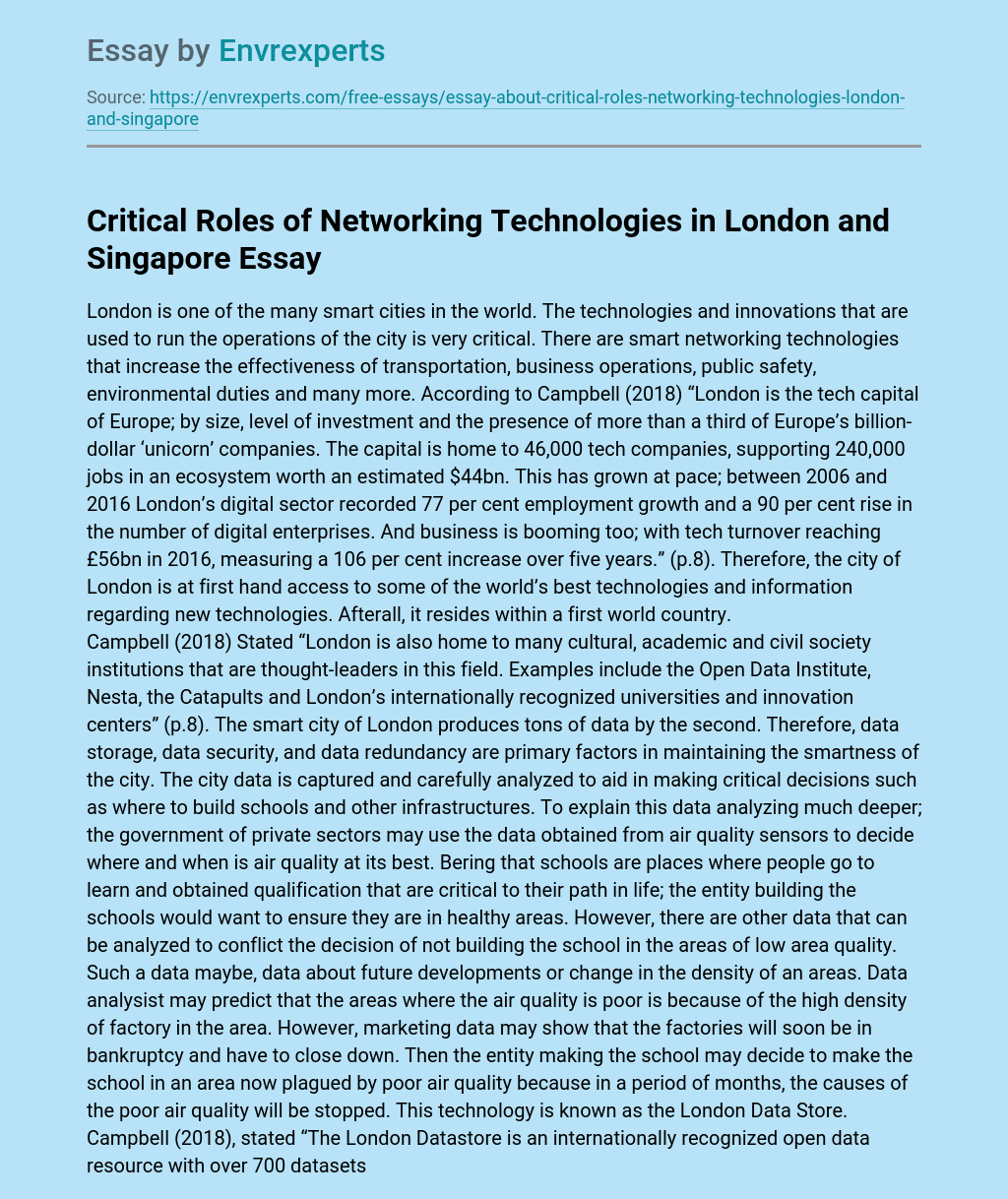