A Critique of Cowspiracy: The Sustainability Secret, a Documentary by Kip Andersen and Keegan Kuhn

I think we can all remember a time when we were in a debate with someone over something we were really passionate about. I am also sure many of us can remember a time when we were talking to someone else who was passionate about something. Now think back to these debates and ask the question if there were any times that the logic used in these debates seemed very biased, unreasonable, and unsound. I think many of us can think of at least one debate we have experienced where one of these things has happened.

Don’t waste time
Get a verified writer to help you with A Critique of Cowspiracy: The Sustainability Secret, a Documentary by Kip Andersen and Keegan Kuhn
Hire writer
$35.80 for a 2-page paper

Now try to imagine this in a project worked on for years. Although it may seem impossible, because time would work these things out, it is possible. The Documentary Cowspiracy: The Sustainability Secret Initially had some good information but due to bias ended up having a couple holes and an primarily focuses on an couple extreme solutions.

Although the documentary did have some holes in it, it wasn't all bad.

The documentary also had a very well throughout structure and was easy to follow.

Instead of some documentaries that I see were issues are tackled as style that seems like pulling them randomly from a hat; this film tackles the issues is a sensible approach. It starts with the basic idea of agricultural environmental poison. It focuses on the single animal and then slowly moves out to how that affects everything including the ocean, rain forest, etc. Finally it ends with the proposed solution to have everyone go vegan. The structure of the film makes it easy to understand what the documentary is arguing.

However despite its clear organization and use of information from the United Nations the documentary had a bias that prevented it from clearly looking at the other side of the issue. As Bruce Janes licensed clinical Therapist in Sexuality, Sexual Behavior, and cognitive function explains in an interview, black and white thinking is a cognitive distortion where a person only sees two sides to something. When this behavior is used in decision making it can cloud the mind creating what could appear to be a faulty bias that may have little sound information. This can lead to misinformed decisions and actions. (Janes) I feel that the documentary is biased in a way hurts its credibility.

This bias, which can also be seen as the all or nothing fallacy, is most clearly notable in the interviews that take place during the documentary. During each interview any information given by the interviewee was ignored unless it directly agreed with Kip Anderson and Keegan Kuhn's point of view. Multiple times in each argument they would passively aggressively attack the interviewee in what seemed to be an attempt to get the interviewee to agree with them.

I feel another clear example of the bias that was shown throughout the film was through the people that he had speaking in the film. Though there were some doctors that were speaking, there were other people that couldn't be considered an expert in the field which were used to back up his argument. There sometimes were people used that wouldn't be considered an expert including the Vice President and Executive from companies that were not focused on sustainability.

The last problem that I saw with the documentary was that it only focused on one extreme solution that seems very unrealistic. According to an interview with Tami Lindsay Licensed Clinical Behavior Support Specialist, when dealing with a large population of any kind whether it be the employees of a company, citizens of the state, or the population of the world we have to remember to be realistic. Making small steps one at a time can be done but when we try to convince the entire world to change a huge part of what they do we are likely to run into lots of resistance. (Lindsay)

The solution that they provide is asking the entire world to change their diet overnight stating that it is the only way to save the world. In addition to being the either or fallacy this is documentary spent too little time looking and/considering other possible solutions. It briefly mentioned the difference between vegetarian and vegan; however, failed to show enough about vegetarian for me to think it not a good option. Additionally this documentary failed to outline steps that could be taken to reach the argued solution. If this solution is the correct solution there should have been a clear plan as to how it could be implemented. In my opinion this solution should have focused heavily on how to overcome the strong resistance that would be faced by the world.

So in conclusion, Cowspiracy: the Sustainability Secret was a very insightful documentary. It does use some good information from the United Nation and is structured in an easy to follow manner. However the bias felt by the authors of the documentary has made for use of incomplete information and doesn't effectively look at all sides of the argument. This documentary is a good one to watch as a place to start but because of the biased information and process of presenting the information I feel that doing our own research is necessary.

A Critique of Cowspiracy: The Sustainability Secret, a Documentary by Kip Andersen and Keegan Kuhn. (2021, Oct 31). Retrieved from http://envrexperts.com/free-essays/essay-about-critique-cowspiracy-sustainability-secret-documentary-kip-andersen-and-keegan-kuhn 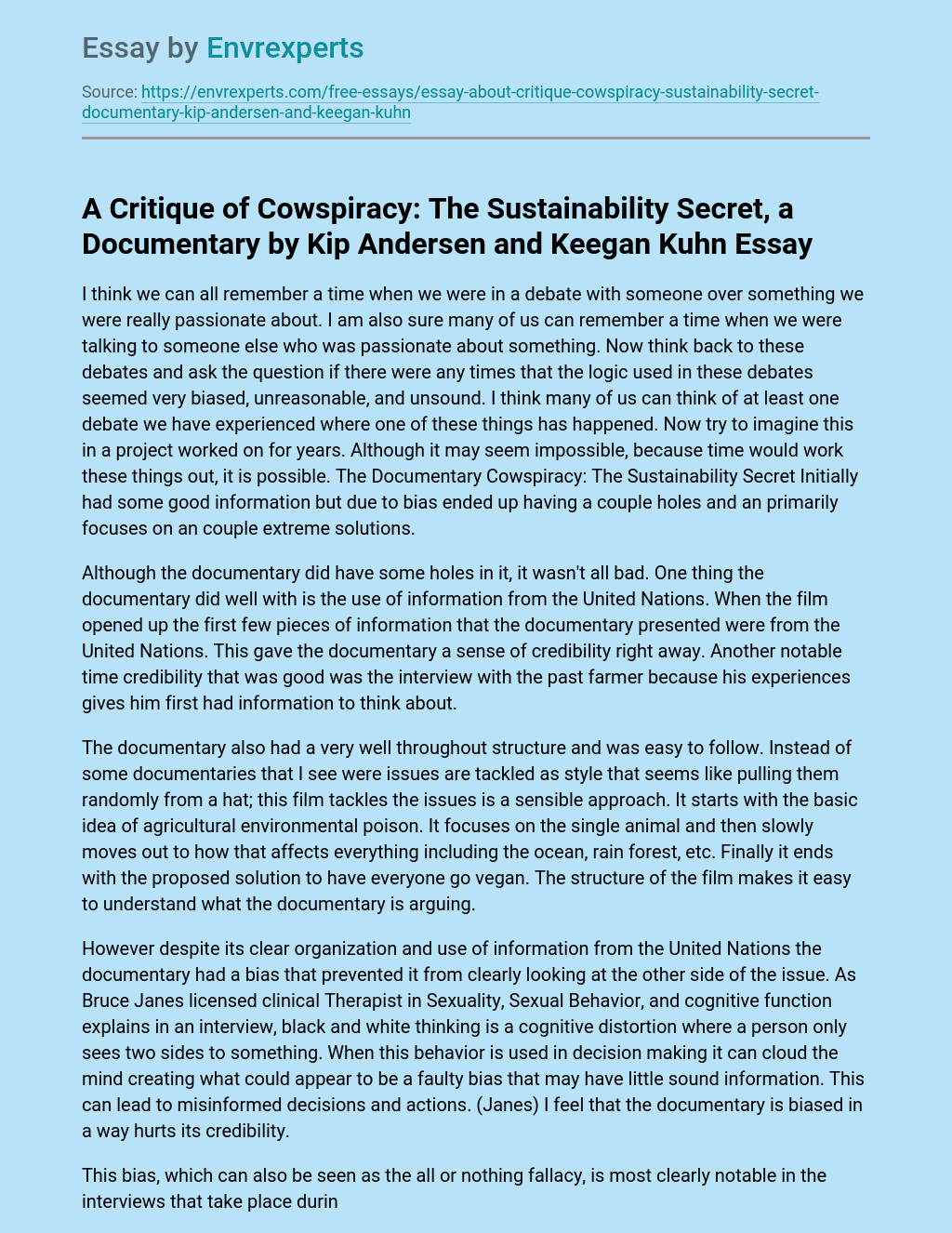