A Critique of Loving the Chambered Nautilus to Death, an Article by William Board

One of the main issues when addressing environmental ethics is who/what gets moral considerability. In the article "Loving the Chambered Nautilus to Death" by William Broad, Board discusses the potential endangerment of nautilus. Nautilus shells are used for jewelry and ornaments with prices that reach prices past five hundred dollars. The species are caught under unregulated fishing guidelines, which is detrimental to the species due to their slow sexual maturity. Although the species is facing the same depletion in population as other species, like whales, rhinoceros, or polar bears, there is no action is being taken to set up restrictions to regulate or inhibit the catching of nautilus until their population stabilizes.

Don’t waste time
Get a verified writer to help you with A Critique of Loving the Chambered Nautilus to Death, an Article by William Board
Hire writer
$35.80 for a 2-page paper

The nautiluses differ from the rhinoceros in the fact that rhinoceros horns are contraband and nautiluses are not. This species is being exploited, but it continues to occur because of the demand for the jewelry. Do humans have the right to kill this species off for personal gain?

In order to answer this question you can look to the classification system of environmentalist: strong/weak anthropocentrism and biocentrism.

Strong anthropocentrism revolves around the ideology that anything that is non-human has no value until given value from a human. Weak anthropocentrism is the belief that there is a relationship between humans and nature that establishes varied values for parts of nature. For example, the esthetic of nature is what guides these types of environmentalist to conserve nature. Biocentrism is the ideology that is concerned with the preservation of nature and the species within the biosphere.

They also establish the idea that yes, humans need to do things to survive and flourish, but the resources they use and damage they cause to the Earth and to other things that live on the planet should be limited and return to days where our impact on the Earth does not outweigh the Earth's impact on us. Also, they establish the idea that things in nature have intrinsic value apart from humans. Humans and other species are essential inhabitors of the Earth and are equal in that sense. In strong anthropocentrism, no animal deserves moral concedrability without having any economic values to humans. Weak anthropocentrist give moral consideralbilty to certain parts of nature that are appealing to humans. Biocetrets believe that all animals deserve moral considerability.

In the case of the nautiluses, strong and weak anthropocentrism would have no issue with the continuation of the catching of this species because of the economic value they bring to humans. However, conservation would come into consideration by weak anthropocentrist if the population of the nauclius could no longer provide their value. On the other hand you would have bio centrist that would want to stop the catching of these animals not only because the population is moving towards endangerment, but because humans have no right to impact the ecosystem if it is unethical.

Environmental ethics forces humans to remove themselves from the center of the earth and realize that the biosphere is an interconnected unit that needs all of its species and ecosystems to properly function. The key to environmental ethics is the idea of moral considerability and who is deserving of this quality. Three environmentalists, Peter Singer, Paul Taylor, and Holmes Rolston III, explain the dynamics of moral considerability using characteristics that should guide our relationship to nature. Singer says that in order for a being to be morally considerable they have to possess sentience, He categorizes humans and animals that have sentience as beings deserving of moral considerability based on the idea that they can suffer or feel pain. Singer establishes a moral universe where only sentience being are included and he creates the moral principle that these beings have equal consideration and take into account their suffering when humans act. He also says we have a moral obligation to cease practices that cause suffering to sentient beings. However, he excludes things like plants, water, and soil because he believes we do not own anything to something that cannot feel. If we were to look at how singer would address the issue of the nautilus, he would most likely believe that the endangerment of this species is a concern, but humans have no obligation to save this species. In Singer's eyes, the nautilus are not sentient being, therefore; they do not receive moral considerability because they do not have the capacity to feel pain and on those bounds they do not get considered. Singer does not believe that humans should purposefully go out and destroy non-sentient beings, but if they are lost tit is not breaking a moral principle. The nautilus being used for human pleasure is not in violation of Singers code for those that deserve moral considerability.

Taylor also creates a moral universe where his concern is for beings that have the characteristics of living and living in their wild habitat and these characteristics are the criteria for moral considerability. He establishes a duty to individual wild animals and plants in their native habitats and believes that we have the obligation to make sure that the good of these organisms are met. The goods that must be met is the ability for the organism to be strong and healthy. Taylor believes that these wild animals and plants have intrinsic value and with this value they have inherent worth and, therefore; these organisms should be morally considered. Humans have a moral obligation to these wild plants and animals living in their wild habitats. According to Taylor, if humans have the moral obligation to these animals with inherent worth, then we should abide by the moral principle to, as stated before, “protect or promote the good of the animals, respect the integrity of the natural ecosystems, to preserve endangered species, and to avoid environmental pollution” (Taylor, 72). Taking Taylor's idea of who deserves moral considerability, we can determine that he would disagree with how humans are treating the nautilus. These nautiluses are wild organisms that live in tier wild habitat and, therefore; by that characteristic humans are morally obligated to again protect and promote their good by actions such as keeping the ocean from being polluted and maintained, so these animals can thrive. Taylor would justify the restriction on catching the animals based on the grounds that they are living creatures and that they have intrinsic worth and we has humans have no right to lead these animals into endangerment and ultimately extinction because of the economics worth humans see in these organisms.

Lastly we have Rolston, who believes that anything that is alive deserves moral considerability. In his moral universe, humans have the duty to individual organisms and species. If something posses the characteristic of being alive, then that being has inherent value. Based on these grounds Rolston makes it clear that if something is living it ought to be alive. The moral principle that Rolson establishes says that humans have to be responsible for their actions and how those actions affect the biosphere. Therefore, humans have the moral obligation to protect individual animals and to protect species as a whole. He also believes that humans should not disrupt the flourishing of a species or their full development of biological powers. If Rolston had a say in the case of the nautiluses, he would be horrified and completely against the treatment of nautiluses by humans. Nautiluses have the characteristic of being alive. Nautiluses are alive and, therefore; have intrinsic value. Nautiluses have intrinsic value and, therefore; they deserve moral considerability and humans have the obligation to be responsible and not use these organisms for personal gain. Humans are endangering the species of nautiluses and will soon drive them into extinction. To Rolston the worst act humans can do is eradicating a species because there is no way to bring this species back. So if humans are to follow Rolston's definition of environmental ethics then they must treat nautiluses like humans.

A Critique of Loving the Chambered Nautilus to Death, an Article by William Board. (2021, Oct 31). Retrieved from http://envrexperts.com/free-essays/essay-about-critique-loving-chambered-nautilus-death-article-william-board 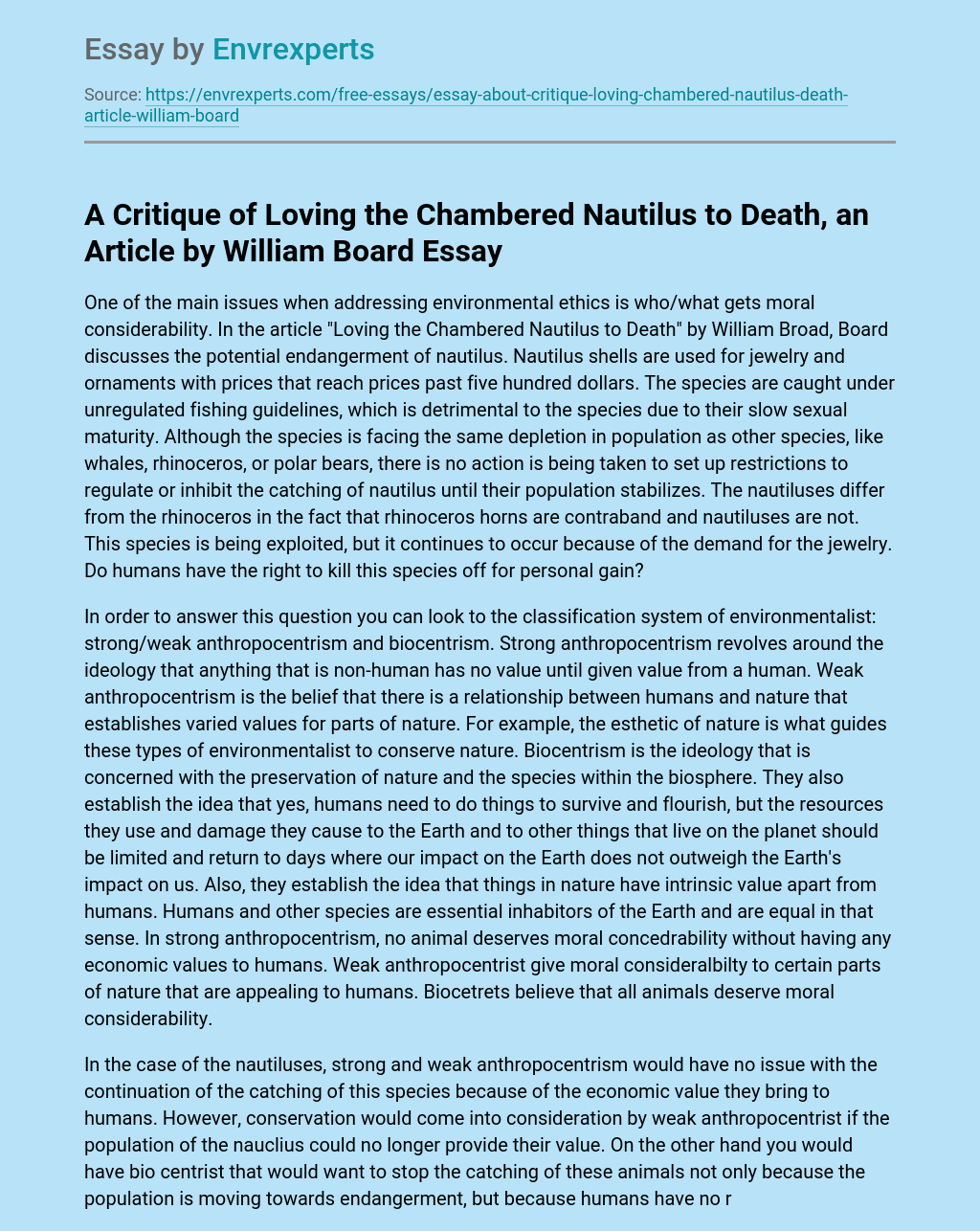