Danger and Sources of Arsenic Poisoning

Arsenic is a ubiquitous metalloid with an atomic number of 33 and a relative atomic mass of 74.92. It belongs to Group VA of the periodic table and is an isotope, existing in four valence states: −3, 0, +3 and +5. The most common oxidation states are the pentavalent and trivalent forms which are seen in the variety of arsenates and arsenites found in water, soil and food. It has many allotropic forms such as elemental, sulfide and carbonate form. The most important commercial compound, arsenic trioxide, is produced as a by-product in the smelting of copper and lead ores.

Don’t waste time
Get a verified writer to help you with Danger and Sources of Arsenic Poisoning
Hire writer
$35.80 for a 2-page paper

Arsenic is natural occurring and based on its ability to manifest in different forms, it can enter air and water through natural and anthropogenic sources. It has been observed however, that anthropogenic sources contribute to its high presence and subsequently infiltration into air and water mediums. From these areas, they are readily absorbed by plants and animals through several ways. One of which is through absorption from soil.

As a result of this contamination and the need to have a less toxic environment, remediation of arsenic contaminated soils is now seen as a major environmental issue (Zandsalimi, Karimi, & Kohandel, 2011).
Drinking water is one of the largest sources of arsenic poisoning worldwide (Chung, Yu, &amp; Hong, 2014).

The World Health Organization (WHO) stated in one of their reports that arsenic from contaminated water can be readily absorbed and change into different metabolic forms and such may adversely affect human health (Chung, Yu, &amp; Hong, 2014). It may also be absorbed in the body through ingested foods. What tends to occur in this case is that the plants will absorb arsenic from water resources or soil and enters the body once consumed.
Arsenic may also be inhaled in air polluted environments. In air, arsenic exists as particulate matter with a dimeter of less than 2 µm. Air currents transported these particles along and even after deposition, they may be resuspended (Maud and Rumsby, 2008). As a result of these, occupational exposure to arsenic is very high. A study carried out by  analyzed the effect of pollution on traffic wardens and high levels of arsenic were noted. This is similarly the case for persons working in industrial zones such as factory workers.
According to Chung, Yu, &amp; Hong (2014), arsenic may be a significant risk factor for certain diseases including cancer. Arsenic has been seen to cause a variety of complications in the following body systems: integumentary, nervous, respiratory, cardiovascular, hematopoietic, immune, endocrine, hepatic, renal, reproductive system and development (Abdul, Jayasinghe, Chandana, Jayasumana, & Silva, 2015). According to He and Charlet (2013), high arsenic concentration in drinking water has been found to elevate late fetal mortality and neonatal/post neonatal mortality. It is also seen to impair cognitive development, cause DNA damage and immunodeficiency in children. As a result of this, it is considered to be a global health risk factor.
The WHO had originally set the allowable level of arsenic in drinking water at 0.20mg/L back in 1958. In 1963, it was reduced to 0.05mg/L. A further reduction of the standard occurred in 1993 when it was moved from 0.05 to 0.01mg/L. However, across the world, water quality analysis data has shown that the concentration in water supplies have oftentimes surpassed this. He and Charlet (2013) highlighted that China has had a major problem with arsenicosis (the effect of arsenic poisoning (WHO, 2001)) up to 2012 as the arsenic concentration in drinking water exceeded the standard level in 19 of the 26 provinces.
As a result of these concerns, it is critical that the source of arsenic in air and water and how it affects human health and the environment be looked at. This will ensure that regulations can be appropriately assessed, and mitigation measures be investigated.

Danger and Sources of Arsenic Poisoning. (2021, Oct 31). Retrieved from http://envrexperts.com/free-essays/essay-about-danger-and-sources-arsenic-poisoning 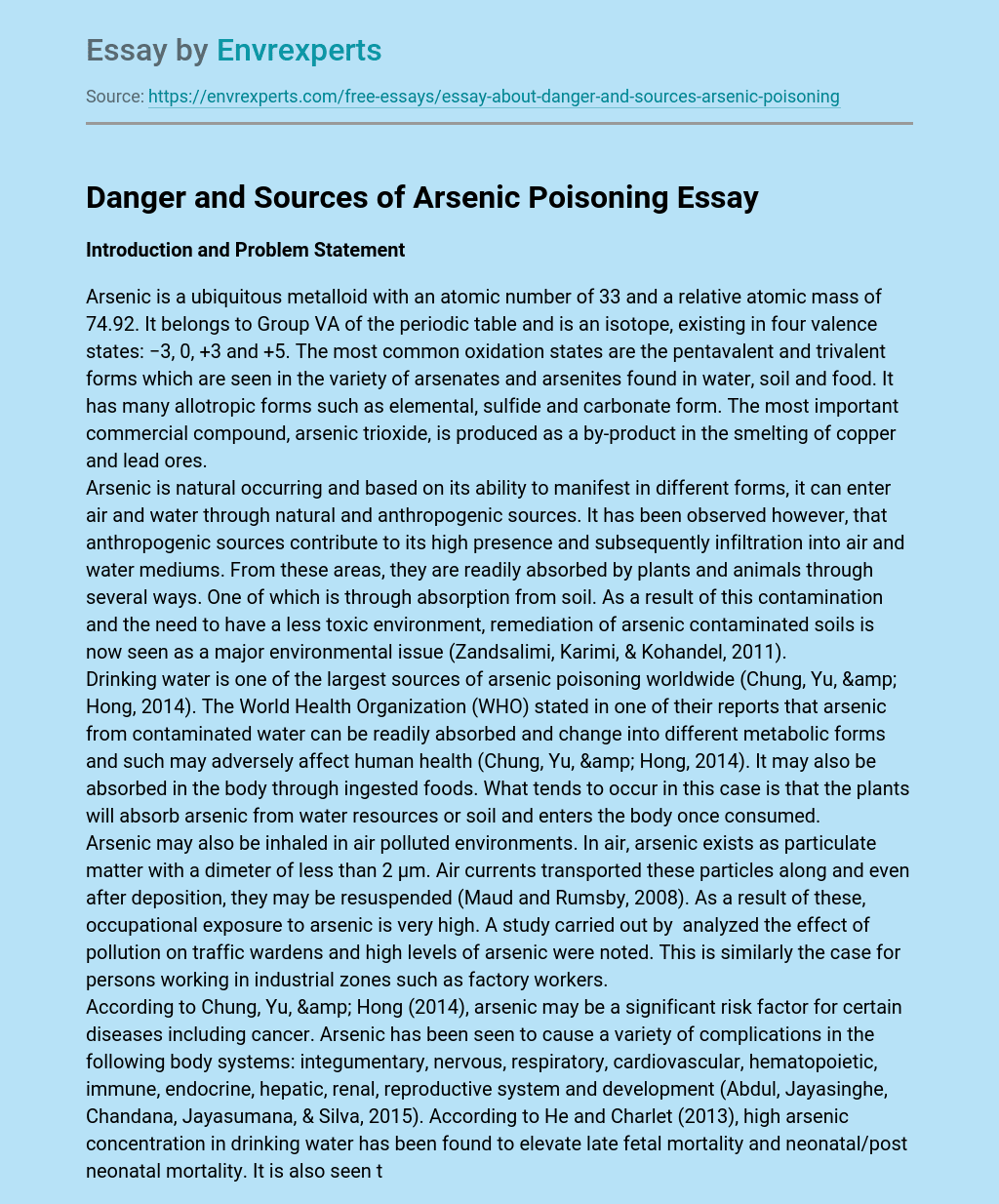