The Danger of Illegalized Tobacco

Entering the 19th century, tobacco turned into one of the leading commodities of the Dutch Colonial Government. With the hope of earning a large income, tobacco began to be planted in a forced planting system. The high risk of the tobacco planting business around Central Java then forced the government to give up forced cultivation of tobacco plants. The Dutch did not want to lose money, then they let the farmers plant and sell their tobacco harvest to the private sector.

Don’t waste time
Get a verified writer to help you with The Danger of Illegalized Tobacco
Hire writer
$35.80 for a 2-page paper

Unexpectedly, the tobacco farming business has succeeded in turning into a commercial trading crop. Also, tobacco can be planted side by side with rice so farmers can still enjoy a variety of crops every year. Gradually, tobacco is then classified as an alternative crop and is often planted side by side with food for daily needs. Indonesia is greatly benefited by the tobacco industry because they contribute up to trillions of annual taxes on state income, but many of us do not know that actually behind the country's profits there are also adverse events, such as the case of tobacco farmers who tend to suffer from tobacco excise, the adverse effects that occur during tobacco processing, and also the impact of tobacco itself which if abused will harm humans.

The regulation also contradicts President Jokowi's dream of wanting to increase investment (Ara, 2019, p. 10). "If I see it, this is too heavy, which affects farmers and workers. The factory is already rich. If the purchasing power of cigarettes is reduced, the factory is clearly (will) lay off workers and the purchase will also be reduced," added a cigarette farmer named Rujiwan (Ara, 2019, p. 10). He who claimed to sell tobacco for 70 thousand rupiahs per kilogram (kg) could only surrender if the price of tobacco fell again. The reason, Ruwijan said the price alone did not provide profit for him. It is very clear that the policy is not effective in reducing public cigarette consumption and increasing tobacco excise revenue or it has many negative impacts especially on the small tobacco industry which absorbs a lot of labor. This policy also affects tobacco farmers whose existence is also still dependent on the tobacco industry.
The health of tobacco workers in large factories is highly considered so that they can carry out their duties properly in accordance with established procedures. They were instructed to use earplugs and masks for work safety. Apart from that, many of us do not know that the health and safety of tobacco farmers are very different. Concerning nicotine is present in all parts of the plant and tobacco leaves in all stages of production. Public health research shows, tobacco farmers absorb nicotine through the skin when handling tobacco, especially when wet plants. Research shows that adult non-smoking tobacco farmers have the same amount of nicotine as smokers in the general population (Arumingtyas, L., 2016, p. 6). Not only are adults involved in tobacco farming, but minors also work. Children work as tobacco laborers because of economic factors but the provision of knowledge related to the dangers of pesticides and preventive measures for exposure are minimal (Arumingtyas, L., 2016, p. 11). That is to say, the government needs to intervene to provide knowledge and understanding in the form of socialization about risk awareness in working in tobacco farming. The government also needs to provide clear instructions so that child tobacco workers are protected. This must be fair between farmers and factory workers, if the health of tobacco workers in the factory is very concerned about safety and health, tobacco farmers also need to be treated well as well.
A study by Korean researchers in the October 2010 issue of the journal Thrombosis Research was built based on the work of Harvard researchers published in 2009 that showed the benefits of smoking at least 10 cigarettes a day. It seems that something in cigarette smoke activates a certain protein called cytochrome, which converts clopidogrel to a more active state (Wanjek, C., 2011, p. 14). Compared to its benefits, smoking still produces many negative effects on the human body. Cigarettes damage almost every organ in the body and smoking is a leading cause of preventable early death (2011, p. 1) Although nicotine alone does not cause cancer, at least 69 chemicals in tobacco smoke are carcinogenic, and smoking causes at least 30 percent of all deaths due to cancer (2011, p. 1) Actually, this depends on how we use tobacco for good or bad, but for now it is unfortunate that more people are abusing it to worsen their condition.
In conclusion, tobacco must be illegal because it has negative effects in many fields. Tobacco has an impact on tobacco farmers, because tobacco taxes are not commensurate with their expenditure as tobacco farmers. The suffering of tobacco workers because every day is directly exposed to tobacco which has nicotine content in it, and also a lot of tobacco abuse which ends up harming yourself. That is why tobacco must be legalized. There are already too many bad effects clearly visible and lots of evidence about it.

The Danger of Illegalized Tobacco. (2021, Oct 31). Retrieved from http://envrexperts.com/free-essays/essay-about-danger-illegalized-tobacco 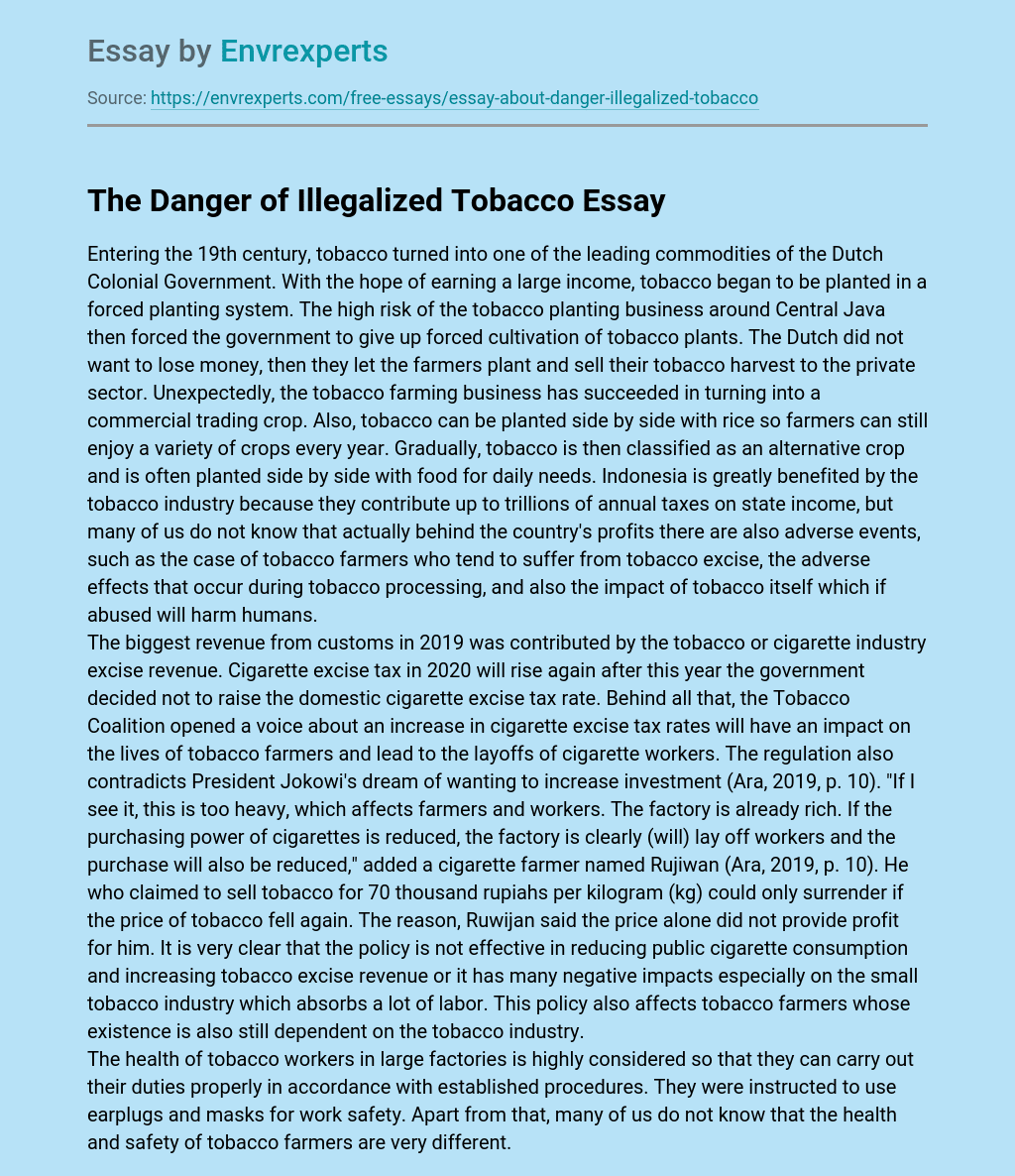