The total coverage of forests on the earth’s landmass is 30 percent and the fact the people are destroying them is worrying. Research reveals that majority of the tropical forests on earth are being destroyed. We are almost at half the forest landmass in destruction. How would earth look life without forests? It will be a total disaster if deforestation is encouraged. Deforestation is a human act in which forests are permanently destroyed in order to create settlement area and use the trees for industries like paper manufacture, wood and construction.

Don’t waste time
Get a verified writer to help you with Danger of Increasing Deforestation Issue
Hire writer
$35.80 for a 2-page paper

A lot of forests have been destroyed and the impact has been felt through climate change and extinction of animals due to destruction of the ecosystem. The impacts of deforestation are adverse and there is need to prevent and control it before it can get any worse.

Deforestation is mainly a human activity affected by many factors. Overpopulation contributed to deforestation because there is need to create a settlement area for the increasing number of people on earth and the need for urbanization for economic reasons.

Recently, population has greatly risen in the world and people require shelter as a basic need. Forests are destroyed in order for people to find land to build a shelter and then trees are further cut to build those houses. Overpopulation is a major threat to the forest landmass and if not controlled, people will continue to occupy the forests until there is no more forest coverage on earth.

Another factor influencing deforestation is industrialization.

Industries that use trees to manufacture their product e.g. paper and wood industries have caused major destruction of forests. The problem with industries is the large-scale need for trees which causes extensive deforestation. The use of timber in industries is a treat to forests all over the world. In as much as we need furniture, paper and homes, it is not worth the massive destruction of our forests.

Fires are also a cause of deforestation. During episodes of drought, fire spreads widely and burns down trees. The fire incidences could result from human activities like smoking or charcoal burning in the forests. Drought due to adverse weather changes in global warming is a natural disaster that claim the lives of people and living things.

Agricultural activities such as farming and livestock keeping also cause deforestation because of the land demand in those activities. Deforestation for farming purpose involves clearing all the vegetation on the required land and using it for and then burring the vegetation hence the name ‘slash and burn agriculture’. The ranches required for cattle keeping among other livestock require a large area that is clear from trees.

Deforestation has a great impact on the ecosystem in different ways. Climate change is influenced by deforestation because trees influence weather directly. Trees usually act to protect against strong winds and erosion but in its absence, natural disasters like floods and storms could be experienced. Also, tree are important in replenishing the air in the atmosphere. Trees have the ability to absorb carbon dioxide from the atmosphere and release oxygen. Without trees, the concentration of carbon dioxide in the atmosphere will be increased. Because carbon dioxide is a greenhouse gas, it causes global warming.

Global warming is a serious environmental issue that causes adverse climatic changes and affects life on earth. Extreme weather conditions like storms, drought and floods. These weather conditions are not conducive for humans and other living things on earth. Natural disasters as a result of global warming are very destructive both to animate and inanimate objects in the environment.

Loss of species due to deforestation has negatively affected biodiversity. Biodiversity is a highly valued aspect of life on earth and its interruption is a loss. There is a loss of habitat for species to exist in as a result of deforestation and therefore species face extinction. Extinction of some rare species is a threat we are currently facing. Animals that live and depend on forest vegetation for food will also suffer and eventually die of hunger. Survival has been forced on animals of the jungle due to deforestation and that is why human wildlife conflict is being experienced.

The water cycle on earth is negatively affected by deforestation. The existence of water vapor in the atmosphere is maintained by trees. Absence of trees cause a reduced vapor retention in the atmosphere which result in adverse climate changes. Trees and other forest vegetation are important in preventing water pollution because they prevent the contaminated runoff into water sources like rivers, lakes and oceans. Without trees, pollution of water is more frequent and therefore the water will be unsafe for consumption by human and animals.

Based on the serious impact of deforestation, it is only safe if solutions are sought to end this problem. The ultimate solution is definitely restoration of the forest landmass on earth. The restoration can be done by encouraging the planting of trees, a process called reforestation. Although reforestation will not completely solve the impacts of deforestation, it will restore a habitat for the wild animals and slowly restore the ecosystem. Major impacts like concentration of carbon dioxide in the atmosphere require another approach. Human activities that contribute to carbon dioxide gas emission to the atmosphere have to be reduced through strict policies for industries and finding alternative energy sources that do not produce greenhouse gases.

Another solution is public awareness. People have to be made aware that deforestation has negative effects so that they can reduce the act. Through awareness, people can also be taught on ways of reducing the population e.g., family planning. On World Environment Day, people are encouraged to participate in activities like tree planting in order to conserve environment and that is how the awareness takes place.

In conclusion, deforestation is a human activity that is destructive and should be discouraged. Environmental conservation is our responsibility because we have only one earth to live in. 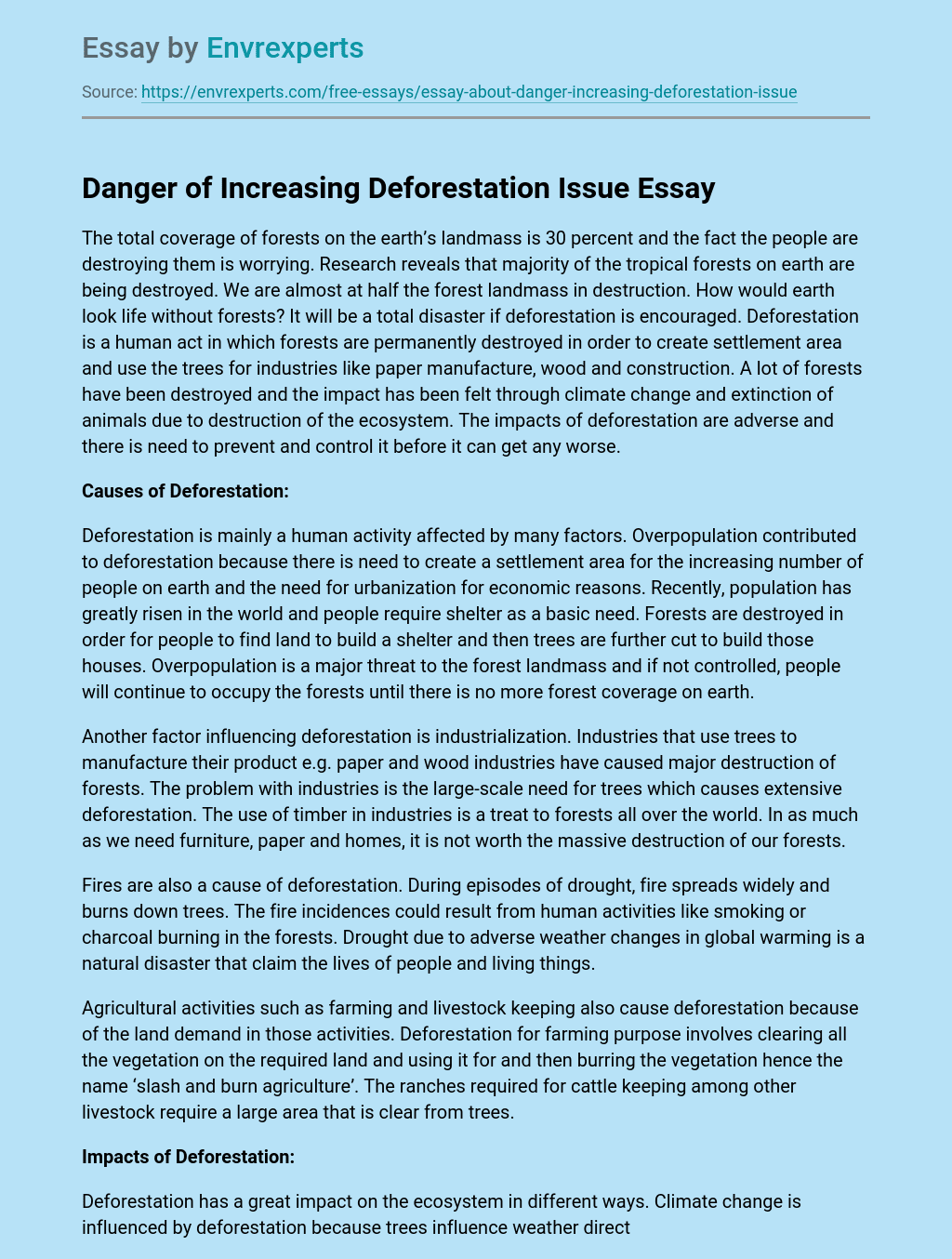