When I was listening to the policy from my ENG 101 teacher which is reusable plastic policy, meaning no bottled water or plastic cups or plastic lined paper cups, I just talked to myself “Wow, that an interesting teacher I have for this quarter!” When my teacher has this policy, I think that he is the person who has a responsibility with our environment, our life and our future life, including nature life and human life. He wants to prompt us that protecting environment around us is very important issue which has been sometimes forgotten in spite of our habits destroying our land, water, ocean, air and our mother-nature.

Don’t waste time
Get a verified writer to help you with Danger of Plastics Pollution Issue
Hire writer
$35.80 for a 2-page paper

This is killing us step by step and day by day but we have neglected. Furthermore, he wants to educate his students about the sense of responsibility to protect the environment and also set the students good habits of reusable plastic items. What he is doing is spreading the environment protection message and raising awareness for the plastic bottle issue.

Some facts show that non-reusable plastics like straws and bottled water are destroying our earth and human life. It can not be denied that plastics are harmful for land, water, air. We, human and animals, are living with a bundle of plastic garbage. Beverage companies produced 239 billion plastic bottles in 2004. That total had more than doubled by 2017 to 494 billion, and the trend continues, with plastic bottle production predicted to hit 594 billion by 2022. We can not imagine that 1,500 disposable water bottles are consumed every second and more than 22 billion plastic water bottles are thrown away yearly.

In the North Pacific alone, an estimated 12,000 to 24,000 tons of plastic end up in fish each year. Over 1 million seabirds and 100,000 (one hundred thousand) mammals die from ingesting plastic yearly. A study last year found that 46 percent of the plastic waste in the Great Pacific Garbage Patch, the giant waste gyre between California and Hawaii . These facts indicates that plastic issue will become the international plague for earth-living creature.

Have you ever burst into tears when you see a picture of a seagull died with full of plastic things inside its stomach? Or even you cry when you see a bottlenose dolphin plays with a plastic six-pack holder in Hawaii. You will ask yourself why do I cry although they are playing. It means you feel so sorry about our marine animals, our ocean, our dying and dying nature. That is truly being showed the impacts of plastic issue to our life globally and locally. Firstly, plastic bottles are not biodegradable. It means plastic cannot be recycled by living organisms. Instead, a combination of the sun’s energy and environmental factors like rain will continue to degrade plastic down into smaller and smaller pieces. These pieces of plastic (also known as microplastics) will always remain on Earth as plastic. With that being said, it can take up to 500 to 1000 years for a plastic bottle to degrade. However, plastic bottles do not biodegrade, so they will remain in our environment forever. Furthermore, when plastic degrades, toxic chemicals in the plastic are released into the environment. Secondly, let ‘s say about microplastics, Microplastics can come from larger plastic items when they break down, or in the form of products like microbeads. Most microplastics float into the ocean, but a lot will sink to the bottoms of riverbeds and mix in with the sediment there. This effects oxygen levels in the water as well as harms animals that depend on these ecosystems for their livelihoods. Because plastic takes so long to break down, microplastics are so small, and these items are located in our earth potentially up to 1,000 years. Thirdly, plastic pollution harms marine ecosystems then indirectly makes hazards to human beings. When an animal consumes enough plastic, their digestive systems could get clogged up, eventually starving them to death. Sometimes, the uneven shape of plastic pieces could even choke animals, like sea turtles, to death. Once plastic is ingested by an organism, it can move up along the food chain. When predators eat prey with plastic in their systems, the plastic gets passed along into the next animal in the food chain.

Seafood with plastic or toxic chemicals in their bodies could be passed along to humans as well when we eat them. Microplastics, too small for us to see, could be present in the fish that we eat. If we continue to trash our environment, the plastics we use and toss could come back and bite us in the back. Additionally, manufacturing of plastic bottles requires fossil fuels, which are non-renewable, and they contribute to greenhouse gas emissions and climate change. The more emissions from manufacturing water bottles and transporting, the more toxins end up in the air we are breathing. Just a small plastic bottle of water, you think, but a serious impact on our current and future life.

I have been researched news online and on television channels about what the world have been done to face with the plastic plague. Then, I found out lots of interesting action on plastic pollution all over the world and in the US. These bellowing are called “A running list” from 2008 to 2019:

And how about our beautiful Seattle? On July 1 , 2018 Seattle becomes first U.S. City to ban plastic straws and utensils. The roughly 5,000 eateries in the city are being encouraged to eschew providing straws or disposable utensils, or at least to switch to paper alternatives. A less green but still legal option, according to the city, is compostable plastic straws or utensils. Seattle is believed to be the first major U.S. city to ban single-use plastic straws and utensils in food service, according to Seattle Public Utilities. The eco-conscious city has been an environmental leader in the U.S., working to aggressively curb the amount of trash that goes into landfills by requiring more options that can be

The city's 5,000 restaurants will now have to use reusable or compostable utensils, straws and cocktail picks, though the city is encouraging businesses to consider not providing straws altogether or switch to paper rather than compostable plastic straws. Seattle's ban is part of a 2008 ordinance that requires restaurants and other food-service businesses to find recyclable or compostable alternatives to disposable containers, cups, straws, utensils and other products. A "Strawless in Seattle" campaign last fall by the Lonely Whale involving more than 100 businesses voluntarily helped remove 2.3 million single-use plastic straws. Businesses that don't comply may face a fine of up to $250, but city officials say they would work with businesses to make the changes.

Above is what people do. How did the scientist do to help solving plastic problem? The invention from the scientist for new-generation plastic is biodegradable plastic, which is either plant-based or petroleum-based, makes them different is that the safety of the environment is a paramount consideration during production. A plant-based biodegradable plastic (PLA) has the shortest time for decomposition. A bacteria was discovered to be able to decompose plastic and a mutant enzyme with the probability of being optimized to breakdown plastic. An enzyme able to breakdown plastic by a team of Japanese researchers is a positive lead.

For my own thinking, solving the plastic issue must come from each person in life, from everybody’s awareness and responsibility. It is just a simple definition that changing our individual habits can fix it. So what can we do to make responsible use of plastic a reality? First: reject the lie. Litterbugs are not responsible for the global ecological disaster of plastic. Second: talk about our plastic problem loudly and often. Start conversations with our family members and friends. Third: think bigger. There is now serious talk of zero waste. A better alternative is the circular economy model, where waste is minimized by planning in advance how materials can be reused and recycled at a product’s end of life rather than trying to figure that out after the fact. For me, what can I help to solve this problem? It just begins simply by using a reusable water bottle, disposing of plastic bottles properly (do not litter) and spreading awareness, sharing the message for our plastic issue. 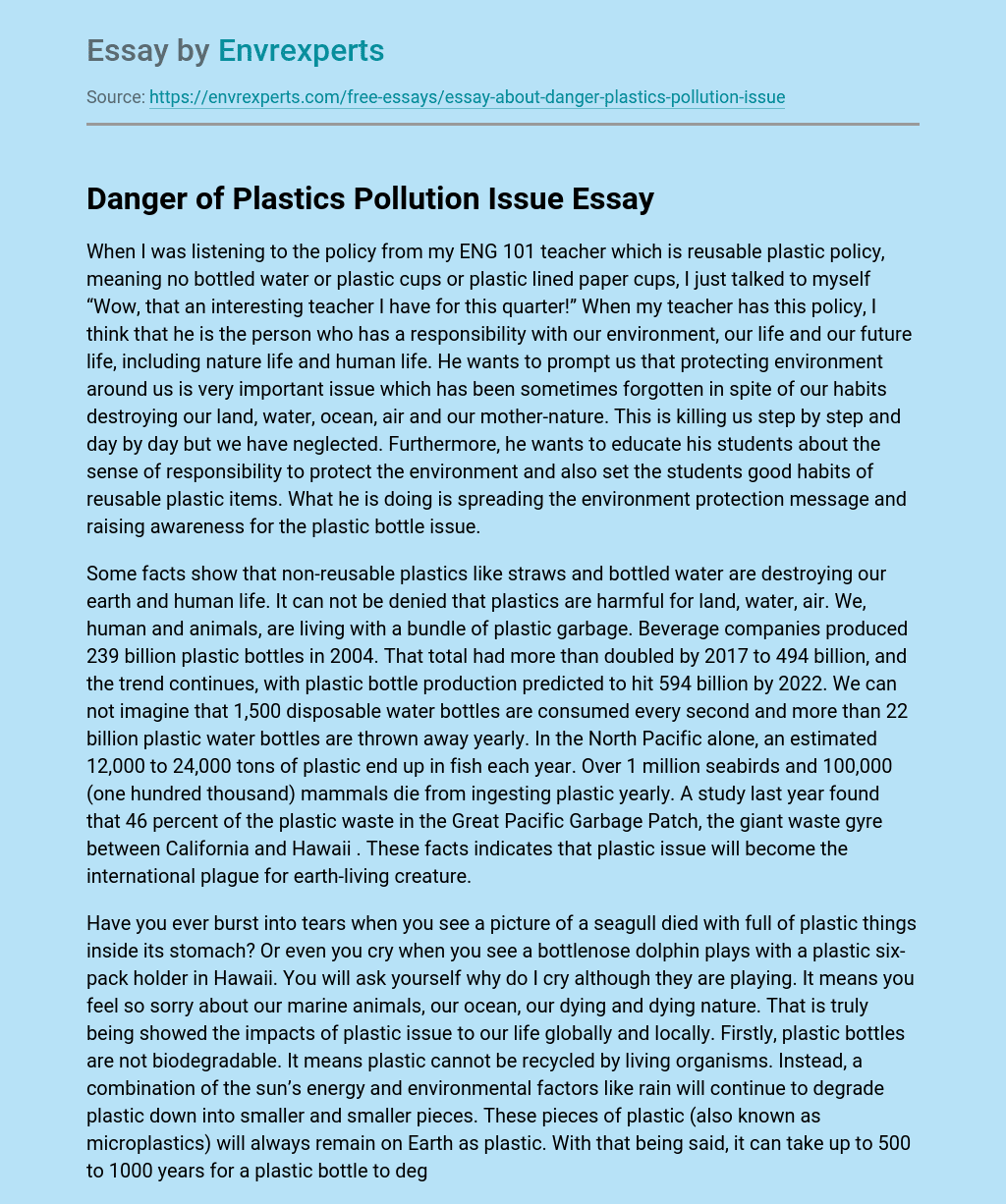