Polyvinyl chloride (PVC) is a thermoplastic polymer produced by chain polymerization from the monomer vinyl chloride. PVC is the third most important polymer for plastics after polyethylene and polypropylene. The PVC plastics are divided into hard and soft PVC. It is used, for example, for pipes, cable sheathing, floor coverings, cosmetics, lotions, perfumes, drinking bottles, children toys, grocery bags, cling wraps e.t.c. It is made softer and more flexible by the addition of phthalates and can contain traces of chemicals like bisphenol A (BPA) (J tickner, 2001).

Don’t waste time
Get a verified writer to help you with Danger Toxins: Polyvinyl Chloride
Hire writer
$35.80 for a 2-page paper

Phthalates are primarily used as plasticizers to impart flexibility to an otherwise rigid polyvinylchloride (PVC) (ATSDR,2002) These plasticizers have been shown to elute at a constant rate from plastic products to the environment: Consequently they are widely distributed in the ecosystem and have been described as being among the most abundant man-made environmental pollutants. In particular, di-(2-ethylhexyl) phthalate (DEHP) is the most commonly used plasticiser. Globally, more than 18 billion pounds of phthalates are used each year and well above 2 million tons of DEHP alone are produced annually worldwide (Lors et al, 2002).

Bisphenol A (BPA) , another toxin from PVC is a commercially important compound that is primarily used as an intermediate in the production of polycarbonate plastic and epoxy resins. It mainly enters the aquatic environment (receiving water and sediment) via wastewater efﬂuents (Koch et al,2011). Some presumably lesser amounts of BPA may also enter the environment via land ﬁll leachates. Within wastewater treatment plants, BPA is expected to be effectively removed by biodegradation and sorption to solids during wastewater treatment (Melcer H, 2011).

Some particulate-bound BPA would be discharged with the efﬂuent and transported downstream.
Humans are exposed to these compounds through ingestion, inhalation, and dermal exposure. Exposure of the general human population to di-(2-ethylhexyl DEHP(phthalates), the most commonly used plasticiser, has been studied more in depth than other phthalates. It has been estimated to be in the range of 3 to 30 μg/kg of body weight/day (excluding occupational exposure, medical exposures, and nondietary ingestions in children), the major source being from residues in food (Shea KM,2003; McNeal et al 1998). These estimates already exceed chronic exposure levels believed to be tolerable for the general population. Preventive limit values, such as reference dose of the US. Environmental Protection Agency (EPA) and tolerable daily intake of the European Union, are 20 μg/kg of body weight/day and 37 μg/kg of body weight/day, respectively [Koch et al, 2003). Recently, it has been shown that general population can be exposed to DEHP to a much higher extent than previously believed and an exposure of children, twice as high as the exposure of adults with respect to their body weight, has been observed. Exposure to these compounds which are endocrine disruptors and can cause cancer or an increased risk of cancer,changes in the development and behavior of infants and children,Changes in a developing fetus, Interference with the body’s natural hormones, Changes in reproductive organs and function, infertility and endometriosis, disturbances in the immune and nervous system functions, heart disease and stroke, asthma etc.
A study done on the effect of BPA on amphipods showed that its effects were based on the concentration of BPA the animals were exposed to. Survival and reproduction were reduced in a manner at 78mg/kg but not 32mg/kg dry weight, whereas growth (dry weight) was reduced at 32mg/kg but not 12mg/kg dry weight. (Charles staple, 2015). Most studies done are directed mainly toward the effect of these toxins on humans and only a few explain the effects it has on aquatic animals. In this study, the effect of these toxins, most especially phthalates and BPA, on amphipods will be studied to provide useful data on the current situation in the aquatic environment. Amphipods will be used in this study because it is an important part of the food chain, playing a major role in the diet of various birds, fish, crabs, and in the decomposition of organic matter (The bay, 1998). 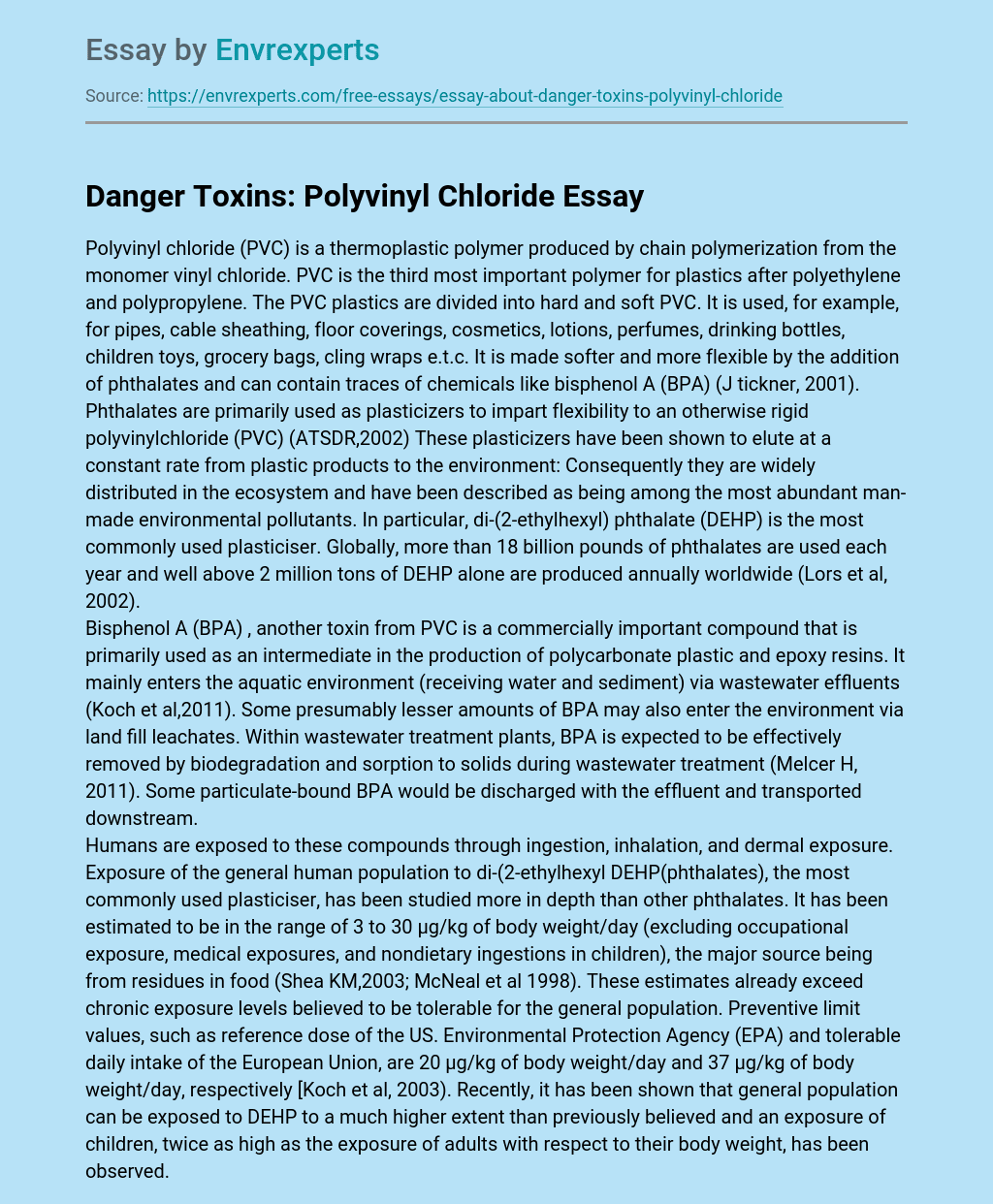