The Dangers of the Western Way of Life

The human species relies on many resources to ensure survival and to proceed with our daily lives. These resources that we use today can range from many things. For an example, crop fields in the United States will ensure that everyone single person in the U.S. is fed. Water, and ensure that no one dies of dehydration and also to water the crops. But what happens when these resources run out, we might soon find out.

A method of living in the world is to live off of food, which isn't a bad thing until it causes more harm then good.

Don’t waste time
Get a verified writer to help you with The Dangers of the Western Way of Life
Hire writer
$35.80 for a 2-page paper

As stated in the article "The Oil We Eat: Following the food chain back to Iraq” by Richard Manning, two thirds of Americas agriculture consists of three specific plants: rice, wheat, and corn (Manning 196). These three specific plants don't only help with feeding humans; they also help feed livestock such as cows and pigs, which then can feed us, the humans.

But this important method of feed us has changed and adapted to the way we live. The way we have adapted is to process the grains. Since American diet does not get all the protein that is needed. But the problem is that processed food uses fossil fuel from machinery to produce it.

Fossil fuel that we need to reduce and save and at the same time we need food to survive. In the article "World on the Edge: How to Prevent Environmental and Economic Collapse" by Lester R.

Brown, it addresses the main question, how much time do we have left until global civilization ends (Brown 207). The serious problem that this article is expressing is the overcrowding of the planet. People do not think about the consequences of our ecological and economic deficits. Just like the generations before us, we say it is not our problem it's the generations after us problem. But the terrifying truth is that it is our problem now.

It can also affect climates. Temperature increase will melt glaciers and decrease the habitat of creatures that live in the artic. It can also affect animals in the rain forest that cannot adapt to this weather. This ice melting is increasing even more because of burning fossil fuels.

Burning fossil fuels releases carbon dioxide into the atmosphere then results to temperature increase. Sadly as stated in the article, we are liquidating the earth's natural assets to fuel our consumption (212). I agree with this because I see the temperature change and the increase usage of fossil fuels all over. Especially in cities that rely on cars as transportations because cars use gas and oil is needed run the vehicle.

To make matters worse, the population is growing. With the growing population the use of these resources are needed more then ever. As seen in California, we entered a water drought. Our water resources are being used a lot the fact we are competing for it.

The solutions to these problems are clearly stated in the article. The first solution to carbon dioxide is to cut down on it. One way is reconsidering transportation, using less cars and in its place use bikes. Another way is quite simple and has been done by humans but not as much as we should. What needs to be done is to shift from burning fossil fuels to trapping the earth's wealth (217). Using wind and solar power energy can achieve this goal. If more factories used more solar power usage I believe it would significantly decrease the carbon dioxide output.

To resolve the problem of decrease in water resources is would be simple. Using recycled water is a simple and creative way to water crops and could save some money in time. Another way is to use efficient irrigation systems and use water-efficient crops that can also feed the population.

After reading “World on the Edge” it gave me a clearer understanding how our resources are almost gone. What is scary to me is to think what happens when the resources are all gone. Then what, the change is greater then any generation has seen in history.

Just how I am reading these articles about the changes in the world, more people need to be informed. Societal awareness needs to be gained by educating the nation (Waldman 266). The issue that most face is the unawareness of how serious the situation is. For an example, most people are carless on their water usage. If they knew the dangers of over usage of water I am sure there would be some type of change.

Personally I knew of some of these problems like the carbon dioxide and water issues. I try my best to reduce my usage of the recourses but its not only me it's the rest of the world. People who are not education about the topic are the people who use the most. As well as companies who are greedy to make money their money. Money is an important part in the world and if it means to burn carbon dioxide to make a few thousands of dollars I believe the company will do so. This is where the government or other respected authority should force these companies to switch to the clean and efficient ways to preserve the atmosphere. There are solutions to the problems but it seems as if something dramatic needs to happen to open these individuals' eyes so they can finally figure it out.

The Dangers of the Western Way of Life. (2021, Oct 31). Retrieved from http://envrexperts.com/free-essays/essay-about-dangers-western-way-life 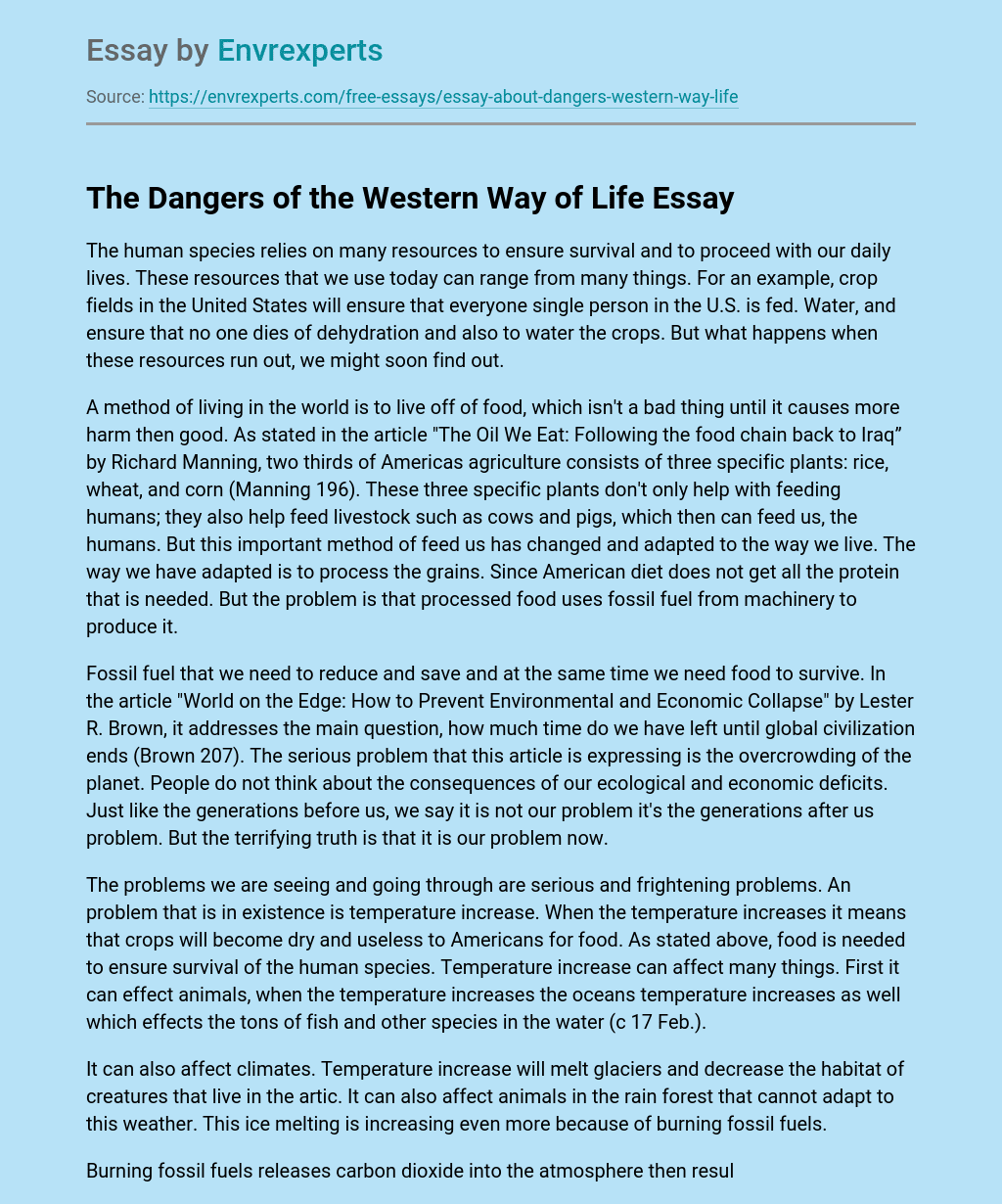