Dark Side of Fast Fashion

The theory of the consumer society relates to the Western Capitalist Culture encouraging acquisition of products in ever increasing amounts. This has been so extensive that Cross-fertilisation between Western and non-Western fashion systems has caused a distinction between the two to be no longer plausible (Leshkowich, 2013). The social normality of behaviour that are accredited to the capitalist economic system promote an accretion in the quantity of consumption through the commercialisation of culture. Consumption has become a means of differentiation, not satisfaction, with a restlessness to incessantly gain clothing without any prospective or rationality.

Don’t waste time
Get a verified writer to help you with Dark Side of Fast Fashion
Hire writer
$35.80 for a 2-page paper

‘It is no longer desire… but a generalised curiosity, driven by a vague sense of unease’ (Baudrillard,1998, p.45).
The use of popular clothing stores to aid fast fashion to grow is an example of conspicuous consumption in society, one that is ‘constituted by the multiplication of objects, services, and material goods’ (Baudrillard, 1998: p.31). The growth of fast fashion during recent years has been considerable, with fast fashion growing by 45% from 2010-2014, and a further third in 2015 (fletcher, 2015).

This substantial growth rate in which fast fashion is continuously rising is facilitated by popular high street stores such as Primark, New Look, Zara and H&M, where both the quality and price of clothing is decreased as a growing effect of fast fashion (Figure 1). The longevity of an item and the unethical repercussions that are linked to consumption is seen as secondary to the captivating renovated trends available.
Figure 2
TheGreenHub, (2019), Zara Queue [ONLINE]. Available at: Thegreenhubonline.

Fashion business success in being built on the concept of ‘Fashion Adoption’(Birtwistle, 2006) which indicates that the industry must embrace new trends, and drive them through their business in order for them to survive. Customers are dependent on fast fashion high street stores to allow the over consumption of clothing and fuel the habit of purchasing without requirement. A mis considered mindset such as this has led to increasing over consumption and over production.
French sociologist, Philosopher and cultural theorist Baudrillard, believes that ‘There is all around us today a kind of fantastic conspicuousness consumption and abundance’ (Baudrillard, 1998: p.31). The observable consumption of clothing is one that is inescapable in society, with conspicuous consumption being a means to show one’s social status. The term, conspicuous consumption, was established in American economist and sociologist Thorstein Veblen’s book, ‘the theory of the Leisure Class’ and was considered to be a product of the developing middle class during the 19th and 20th centuries; and has progressed since due to the result of fast fashion (Veblen, 1889). The theory portrays a transparency to a person’s fortune, specified through their extensive levels of purchasing of goods, with an intent of providing a representation of their wealth. The increase of fast fashion provides the consumer society with approachability and accessibility to reach new styles and trends for an inexpensive cost.
Due to the accessibility of trend adapted clothing in high street stores fast fashion has produced a rivalry within the consumer society for who can purchase the maximum volume of clothing, shown as a trophy to other consumers. An intention has been established for high amounts of consumption to equate to high levels of wealth, and therefore the frontrunner is an admirable figure in society. The competitive mindset within the consumer society is aiding the ideal that consumption is necessary to prove yourself to others, fuelling a negative mindset personally and ethically.
Fast fashion has also produced a competitive nature for what retailer is selling the most fashionable clothing, with Fashion houses accommodating this by trying to keep updated and compete for more collections each year (Ledezma, 2017). Haute couture has now taken a back seat in terms of popularity to the trendsetting fast fashion retailers. Due to fast fashion being both trendy and affordable, fast fashion causes trend flow from top to bottom and bottom to top, which is very different to haute couture. Such availability to clothing from fast fashion, with the addition of competitivity, results negatively in a rivalry of who can look the best, or have the highest volume of clothing. This encourages us to ‘live in a world where there is more and more information, and less and less meaning’ (Braudillard, 1981), fuelling a more significant relation with the quantity of clothing than the garment itself.
The necessity for self-esteem is fulfilled by both the comfort of clothing and the appearance of looking good, strengthening confidence both physically and psychologically. This is resulting in the image of a fashionable outfit constantly increasing and changing. With a large amount of people that do not have accessibility through resources or wealth; this is creating a negative impact on the consumer society. Furthermore, this competitivity has resulted in designers feeling overworked from trying to produce six or more collection per year that are unique whilst attempting to continue to still fit the brands image (Ledezma, 2017). This is unsustainable and unnecessary.
It is argued that fast fashion retailers are not taking responsibility for how their actions affect the planet; with them being the major resource and ease of access for consumers to purchase more, they are largely seen at fault. Consumers shop for enjoyment and recreation, therefore fast fashion stores operate by tapping into consumers inclination to have a selection of separate trends at a low price, with no implications of its ethical competence. This is accomplished by selling in mass quantities, in standardised sizes, and in finished conditions. The culpability of this leads to low cost manufacturing and mass production, as they are directly linked to the rise of fast fashion.

Dark Side of Fast Fashion. (2021, Oct 31). Retrieved from http://envrexperts.com/free-essays/essay-about-dark-side-fast-fashion 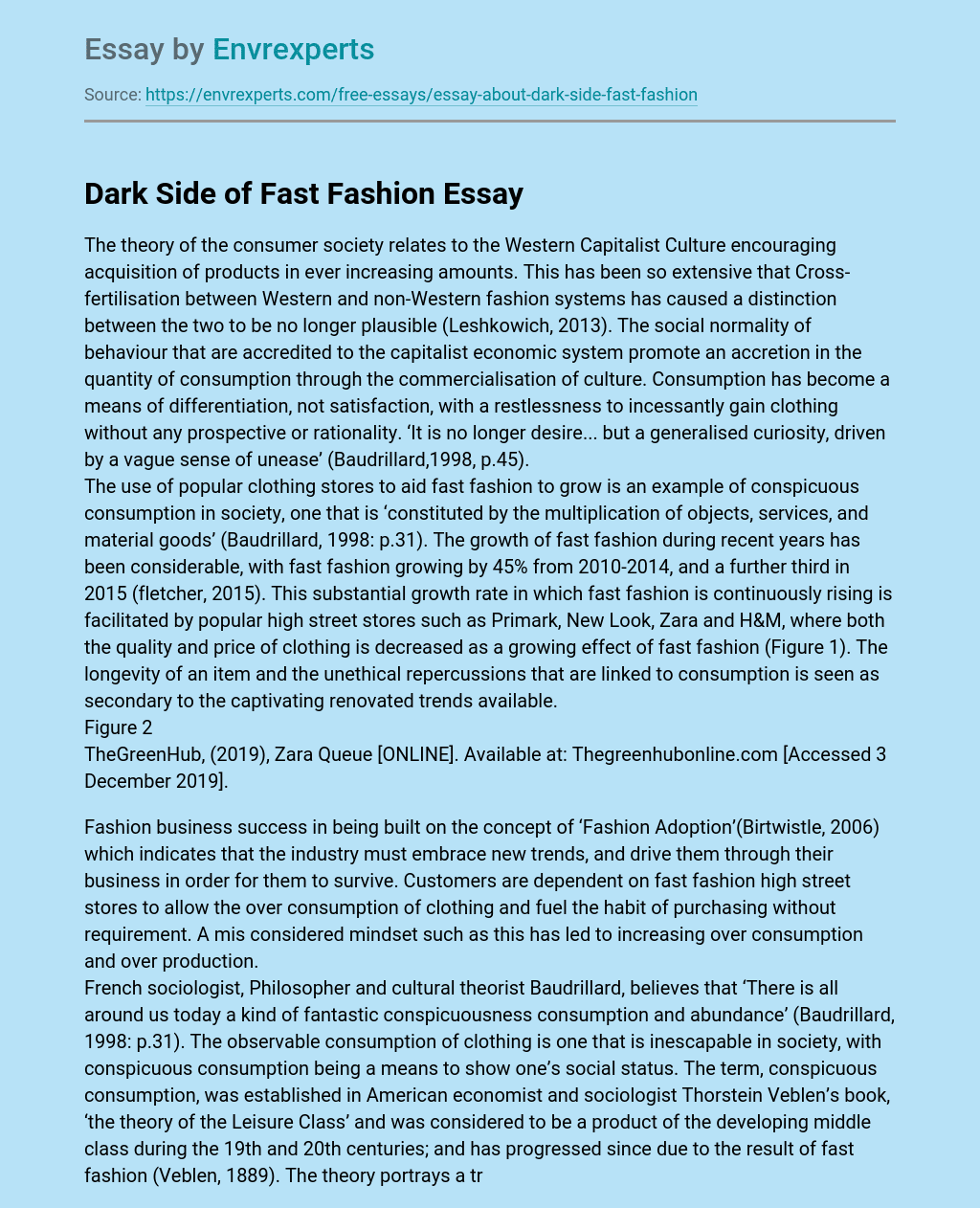