All of this makes him remember about deep ecology. So he starts thinking, “deep ecology is a school of thought that voices for the necessary social change to go to the root of the environmental problem. This is called ‘deep’ as it asks the basic or says the fundamental questions regarding the environment, and by doing so, it tries to entail fundamental changes in the way that human beings understand themselves.

Arne Naess is an advocate of deep ecology.

Don’t waste time
Get a verified writer to help you with Deep Ecology
Hire writer
$35.80 for a 2-page paper

Deep ecology tries to construct alternative worldviews that can challenge and replace the dominant world view that only focuses on humans.

And by doing that, they try to build such a world view that has ecological insights into problems such as diversity, interdependencies, and holism.

On the other hand, the reductionist principle within the dominant world view tries to reduce everything else except humans into a machinelike element governed by the strict physical law of the universe.

This makes everything, except human beings reducible to pure physical law to achieve a more fundamental level of reality.

The metaphysics of deep ecology rejects the dominant word views of individualism and reductionism. It thinks that humans are not separated from nature. In fact, they are part of their surroundings. They are part of nature. They are made by the relationship to their biotic and abiotic elements of the environment. Thus the human nature is inseparable from nature. Besides, it claims that the reductionist approach reduces human beings to individuals distinct from the social and natural environment and consequently thinks that everything else in nature can be reduced to physical law is wrong.

To replace the dominant world view, the deep ecology puts forward two ultimate norms. They are self-realization and biocentric equality. By self-realization, people understand that their existence is interconnected within the rest of nature. Biocentric equality claims that all organisms and beings are equal members of the interrelated whole, and because of that, they have equal intrinsic worth.

Self-realization is a process that comes about by self-examination. By this, we realize that we are part of a greater whole. By this, one realizes that there is no essential difference between humans and nonhumans between the self and the other. This helps us realize that we are not individuals who are separated and distinct from nature; rather, we are a part of the greater self.

By understanding that the nature of human beings is constructed by our relationships with other parts of the natural world, we come to appreciate the oneness. The identification between the human self and the non-human or natural environment creates a deep connection between them. This, in turn, makes their relationship more harmonious. And by this, the deep ecologists go beyond the individual self or the atomic self.

Deep ecologists think that self-realization, self-fulfillment, self-interest are not problematic as long as the understanding of the self is not individualistic or atomic. Thus they use the term ‘Self,’ which has a holistic sense contrasting it with the term ‘self,’ which has an individualistic sense. As they think that a person’s self can be defined by the entities and situations by which the person identifies himself. And by self-realization, the self comes to know the Self, and self-interest becomes Self-interest.

In the question of the conflict between the interests between humans and nonhumans, deep ecologists would agree that in the case of vital interest, humans may utilize nature. For example, eating plants and animals to survive. But apart from that in the conflict of interest between humans and nonhumans, deep ecologists are prone to favor the nonhuman interest.

Besides this, they would suggest a lifestyle that is simple, relatively non-technological, self-reliant, decentralized communities, along with minimizing our consumerist and materialistic desire. They hope that when people realize that the environment is part of themselves and they are a part of the environment as well, then they will try to maintain and protect it.

Besides this, when deep ecologists critique the dominant world view, they tend to incorporate every human within its sphere. But in reality, the dominant worldview is constructed and implemented by Western civilization. Some even criticize by saying that deep ecology intends to reduce everything into the ‘one thing’ and while doing so, disregard the difference that one thing has from another.” 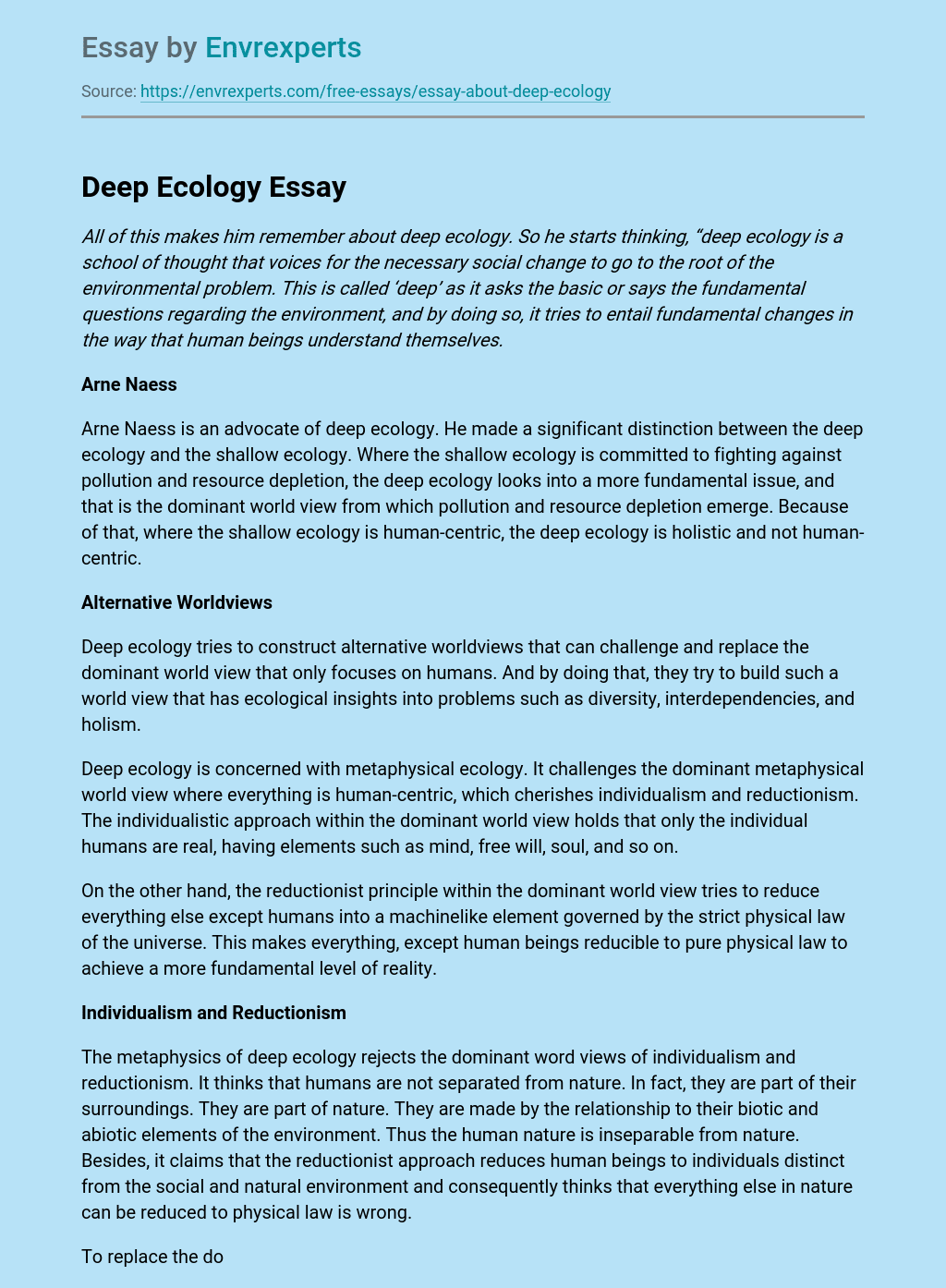