Deepwater Horizon is a film based on a true story. It is directed by Peter Berg. It goes on about how the biggest oil blast happened at an oil rig at the Gulf of Mexico. The real life event happened on the 20th of April 2010 however the film was released on the 30th of September 2016. The film shows us the events that happened for the massive fire that lead to an explosion on the rig to breakout (01:00:05). It is about how two BP managers were persistent in extracting mud from the rig even though there were some risk factors involved.

Don’t waste time
Get a verified writer to help you with Deepwater Horizon by Peter Berg
Hire writer
$35.80 for a 2-page paper

They did not really take into consideration the negative outcomes. A fire broke out on the rig and the power went down, which resulted into darkness. One of the workers was brave enough to back into the fire and save those who needed saving. From a total number of 126 people who were on the rig on the 20th of April 2010, 17 were injured and 11 lost their lives.

The main character in the film is Michael Williams also known as Mike. He is the Chief Electronics Technician and basically one of the people that Mr Jimmy trusts. We know that Mike is the main character in the film because he is the only character where any insight is giving about him. We are introduced to his family (07:25) and that makes us connect with him because we know where he comes from. Mike is a person who really loves and cares for his family.

He can very much be considered as the hero of the film. James Harrell who we know as Mr Jimmy, is one of the important characters in the film.

He is the Offshore Installation Manager. He is responsible for the rig and the safety of everyone on the rig, he ensures that everything on the oil rig runs according to plan and that all safety precautions are taken into consideration. Mr Jimmy has more than a manger and employee relationship with Mike. This can be proven because Mr Jimmy tells Mike to greet his wife (47:43) and we also see this because at the end of the film when she walks out of the hotel with Mike, they come across Mr Jimmy and she gives him a hug before exiting the hotel(01:34:23) Andrea can also be considered as an important character because the director sort of shows us a bit about her personal life, we see that she drives a red mustang and she has a boyfriend who has a motorbike (06:35). Her job on the rig is quite important as she has to monitor the alarms and maintain location of the rig. She makes sure that rig remains stable at all times (35:45).

There are three different levels of management, being the top management which is the highest management. This management is responsible for coming up with strategies and decisions relating to the business. It would be Mr Jimmy and BP managers. The second level is the middle management, which is responsible for the tactical decisions of the business in this case it would be people like Jason and Andrea. The last level being where they are told what to do and they make it happen. In this case it would refer to other workers on the rig. Mr Jimmy was the one to make the final decision on whether the mud should be drilled out or not and because he felt pressurized by the other top management, which was the BP managers sent to ensure that everything went according to plan. He ended up giving them the go ahead of drilling the mud out. The leadership taken by the BP gentlemen however was not very good because they could not take no for an answer, they wanted things to be done their way. We can see that Mr Jimmy cares for his workers because he explains to the two BP managers that his crew lives on the rig (29:43) therefore he cannot make decisions that could endanger them. He knows his job because he tells Donald and Bob that the rig is not stable enough for them to start drilling and that it would take them more than 46 days for it to be stable. When Bob and Donald insist on having the drilling done due to them being 50 days behind schedule, it is then when Mr Jimmy decides to have a negative pressure test done before any decision is made(31:11).

As soon as Mr Jimmy leaves the test control room, we see that Donald puts pressure on the workers and tells them to run a second negative pressure test, on the kill line also known as the bladder effect (40:28).There was too much controlling especially from the BP people. They basically demanded that a second negative pressure test should be run. If they had just accepted that the pressure was high and left things as they were, there wouldn’t have been an explosion. Even though it was explained to them that it was risky to go ahead with the process, they did not care and all they wanted was for things to be done their way. The people were not guided properly. The BP managers were autocratic leaders because they dictated what should be done, even after they were told that what they wanted to happen was not possible due the pressure being too high(39:54). They threatened the Deep-water Horizon workers about giving them a bad report when they get back to their big bosses (50:51)

There was no principle based ethic applied in the film because the top management team did not put in mind the possibilities of the action taken being ethical or not. The consequence ethic however did prove that the action that was taken was not ethical because the rig ended up in an explosion. Donald manipulated Mr Jimmy and his team by asking them how the pressure would be so high but yet have no mud shooting out of the drill pipes (40:05). If the two BP managers were really professional then they would have listened to Mr Jimmy and not have pushed for a second negative pressure test to be run. Donald believed that the results were inaccurate because no mud was flowing onto the rig, hence he believed that something was wrong with the drill pipes or the sensors (41:50). The reason why the second negative pressure test that was run on the kill line came out with zero pressure was because there were rocks blocking the pipes (45:05).

Donald does not approach the workers with a positive and respectful manner. We can prove this by seeing how he talks to Jason when he tells him to start the drilling process and Jason refuses to go ahead with the process without Mr Jimmy’s consent (46:19). When Jason calls Mr Jimmy telling him about the results they received from running the negative pressure test from the kill line, Mr Jimmy is a bit sceptical about going through with the drilling process (47:10). We can however think that one of the reasons why agreed to going through with the drilling was because he saw how everyone on the rig was excited about getting the bonuses

The management of the film did not think about the possible negative outcome that would take place when they made the decision of extracting the mud. Not much planning was done because if they had planned then they would have waited for the cement underwater to be stable first before extracting the mud. One can say that the BP managers only looked at the positive outcomes and not at the negative. BP took an environmental risk because due to their negligence they caused physical environmental damage because they polluted the ocean with about 5 million barrels of oil. Financial risk was also taken by BP because not only did they lose money but their reputation was ruined because they were known for putting the lives of the people that were on the rig in danger. The strategy that was used was poorly formulated because when they did the pressure test, they got two different results which proves that they was no accuracy in the tests. They took a workshop risk because they knew that if something were to go wrong then there would soon be mud flowing onto the rig through the drill pipes. Their persistency endangered the lives of 126 people because of greed and wanting to dominate and feel in power. Donald was hard headed and really wanted things to be done his way. They just focused on the fact that the negative pressure test that was run on the kill line came out positive which meant they could go ahead.

The disaster that happened at the Deep water Horizon was rightfully blamed at the BP. They basically pushed the deep water horizon workers into a corner because Donald kept on saying that he would report them to his head offices, and that would not be a good thing for them. It could mean that they would lose BP’s business and without it then it would result in job losses. BP should have handled the situation differently with a more professional approach. Meaning that listening to one another and accepting that the ground was not stable enough for them to extract the mud. BP manipulated Mr Jimmy and his team and left them with no choice but to do what they wanted. One of the possible reasons why Mr Jimmy went ahead with the process was because his workers were so happy and looking forward to receiving bonuses. 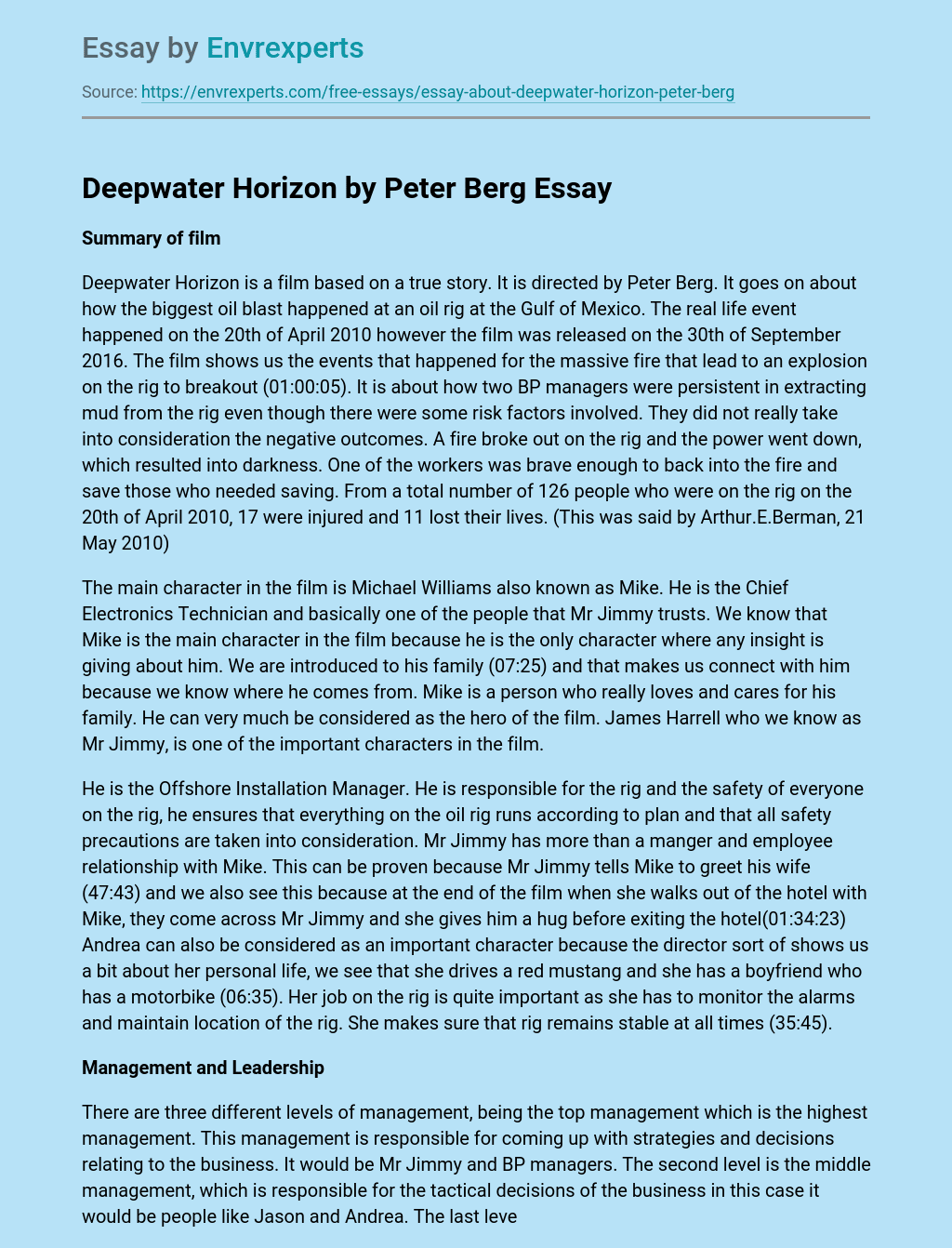