A Definition and Discussion of Acid Rain

What is Acid Rain?

A form of air pollution, currently a subject of controversy because of widespread environmental damage it has been blamed. It forms when oxides of sulfur and nitrogen combine with atmospheric moisture to make sulfuric and nitric acids, which then can be carried long distances from their source before they are released by rain. The pollution may also take the form of snow or fog or be precipitated in dry forms.

One large area that has been studied extensively is northern Europe, where acid rain has eroded structures, injured crops and forests, and threatened or ended life in freshwater lakes.

Don’t waste time
Get a verified writer to help you with A Definition and Discussion of Acid Rain
Hire writer
$35.80 for a 2-page paper

In 1984, for example, environmental reports said that almost half of the trees in Germany's Black Forest had been damaged by acid rain. The northeastern United States and eastern Canada have also been affected by this form of pollution.

The problem of acid rain originated with the Industrial Revolution, and it has been growing ever since. The severity of its effects has long been recognized in local settings, as exemplified by the spells of acid smog in heavily industrialized areas.

The widespread destructiveness of acid rain, however, has become evident only in recent decades.

Industrial emissions have been blamed as the major cause of acid rain. Because the chemical reactions involved in the production of acid rain in the atmosphere are complex and as yet little understood, industries have tended to challenge such assessments and to stress the need for further studies; and because of the cost of pollution reduction, governments have tended to support this attitude.

Studies released by the U.S. government in the early 1980s, however, strongly involved industries as the main source of acid rain, in the eastern U.S. and Canada. In 1988, as part of the United Nations-sponsored Long-Range Transboundary Air Pollution Agreement, the United States, along with 24 other nations, ratified a protocol freezing the rate of nitrogen oxides emissions at 1987 levels. The 1990 amendments to the Clean Air Act of 1967 put in place regulations to reduce the release of sulfur dioxide from power plants to 10 million tons per year by January 1, 2000. This amount is about one-half the emissions of 1990.

What Can I Do to Help Solve This Problem?

People can help prevent acid rain by driving their cars less and making sure that their cars are in good condition and meet emissions regulations set my the city or state. We can also help by getting our community involved in helping the environment. People can also make sure that industries in their community meet state and federal emissions regulations. Disposing of harmful chemicals such as gasoline, used car oil, anti-freeze exc.

A Definition and Discussion of Acid Rain. (2021, Oct 31). Retrieved from http://envrexperts.com/free-essays/essay-about-definition-and-discussion-acid-rain 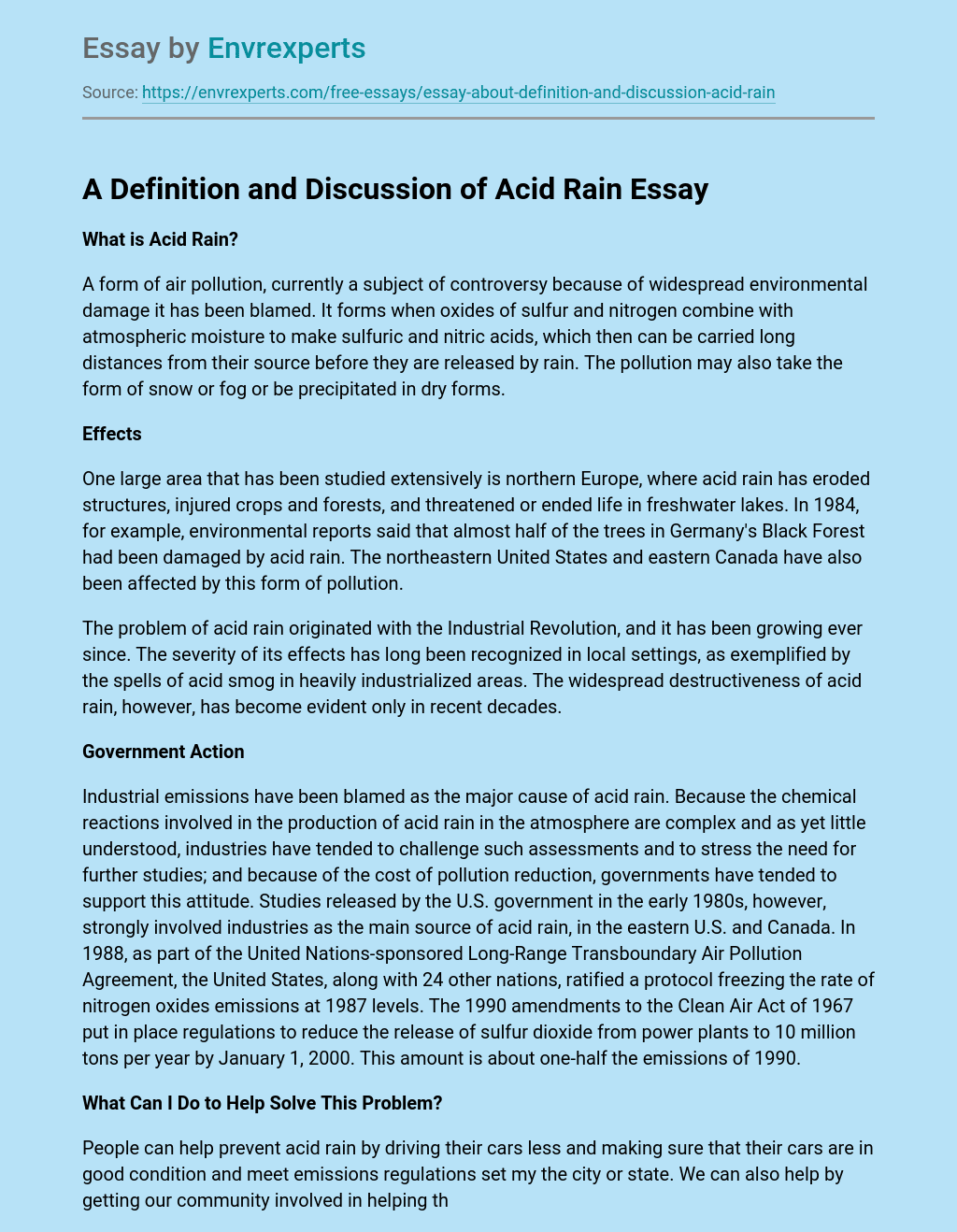