A Definition of Biomes

By definition, biomes are major regional groups of distinctive plant, and animal communities best adapted to the region's physical natural environment, latitude, altitude and terrain factors. A biome is also composed of communities at stable steady state and all associated transitional, disturbed, or degraded, vegetation, fauna and soils, but can often be identified by the climax vegetation type ("Biome" 1). This means there can be dozens of different biomes in the world all characterized by various differences. For example, we live in what is known as the Temperate broadleaf and mixed forests biome.

Don’t waste time
Get a verified writer to help you with A Definition of Biomes
Hire writer
$35.80 for a 2-page paper

From there, we can be further classified into what is called the Northeastern coastal forests. There are many various biomes that can be further classified. They can be classified as either terrestrial or aquatic biomes. Aquatic biomes include continental shelf, littoral, riparian, pond, coral reef, kelp forest, pack ice, hydrothermal vents, cold seeps, benthic zone, and pelagic zone ("Biome" 1). All these biomes are found in different depths and locations in the ocean.

Aquatic biomes make up more than 70 percent of the Earth's surface and are essential for everyday life.

The continental shelf is an extended perimeter of each continent, which is covered during interglacial periods such as the current age by relatively shallow seas and gulfs. Continental shelves usually ends at a point of increasing slope, the shelf break. The sea floor below the break is the continental slope. Below the slope is the continental rise, which finally merges into the deep ocean floor, the abyssal plain.

The pelagic zone is the part of the open sea or ocean comprising the water column, all of the sea other than that near the coast or the sea floor. The pelagic zone can be divided into 5 sub-zones based on different ecological characteristics, which is roughly a function of depth. These 5 sub-zones are Epipelagic, Mesopelagic, Bathypelagic, Abyssopelagic, and Hadopelagic. The Epipelagic zone, from the surface down to around 600 feet, is the illuminated surface zone where there is enough light for photosynthesis. Plants and animals are largely concentrated in this zone. Here, you can typically encounter fish such as tuna and many sharks. The Mesopelagic zone, from 600 feet down to around 3500 feet, is known as the twilight zone. Although some light penetrates this deep, it is insufficient for photosynthesis. The Bathypelagic zone, from about 3500 feet to 13000 feet, is almost entirely dark, however, there are bioluminescent organisms. There are no living plants, and most animals survive by consuming detritus that falls from the zones above or by preying upon others. Giant squid live at this depth, and here they are hunted by deep-diving sperm whales. The Abyssopelagic zone, from about 13000 feet down to above the ocean floor, has absolutely no light at this depth and most creatures are blind and colorless. Finally, the Hadopelagic zone, which is the deep water in ocean trenches, is derived from Hades, the classical Greek underworld. This zone is 90% unknown and very few species are known to live here. The epipelagic and the mesopelagic zones together comprise the open ocean's photic zone. The remaining zones comprise the open ocean's aphotic zone. The bathypelagic, abyssopelagic, and hadopelagic zones are very similar in character, and some marine biologists combine them into a single zone or consider the latter two to be the same. Some define the hadopelagic as waters below 6000 meters, whether in a trench or not (Nybakken 124, "Pelagic Zone").

Closer to the coast and the continental shelves contain very noticeable biomes, coral reefs. A coral reef is a type of biotic reef that develops in tropical waters by the growth of coralline algae, hermatypic corals, and other marine organisms. Coral reefs are typically massive biogenic formations of calcium carbonate, limestone, which is deposited around the bodies of the inhabitants of the reef as skeletal material. This material gradually accumulates as debris and is knitted together by the continued growth of the attached forms living on the reef. The building blocks of coral reefs are the skeletons of generations of reef-building algae, corals, and other organisms that are composed of calcium carbonate. Reef-building or hermatypic corals are only found in the photic zone above 200 feet, the depth to which sufficient sunlight penetrates the water for photosynthesis to occur. The coral polyps do not photosynthesize, but have a symbiotic relationship with single-celled algae called zooxanthellae. These algal cells within the tissues of the coral polyps carry out photosynthesis and produce organic nutrients that are then used by the coral polyps. Because of this relationship, coral reefs grow much faster in clear water, which admits more sunlight. Coral reefs support an extraordinary amount of biodiversity, although located in nutrient-poor tropical waters. The process of nutrient recycling between corals, zooxanthellae, and other reef organisms provides an explanation for why coral reefs flourish in these waters. Humans continue to represent the single greatest threat to coral reefs. In particular, land-based pollution and over-fishing are the most serious threats to these ecosystems. Physical destruction of reefs due to boat and shipping traffic is also a problem (Nybakken 338-350).

Kelp forests are a type of marine ecosystem established around colonies of kelp. They contain rich biodiversity. Kelp can stretch 2-30 meters or from their anchors on the sea floor to the surface, providing a vertical infrastructure that is home to many fish and invertebrate species. Kelp forests are found in temperate ocean waters around the globe wherever water conditions are conducive to the successful establishment of kelp colonies. Kelp favors waters between about 4 and 20 degrees Celsius; various species of kelp favor different ranges of temperatures, but none grow in waters where the temperature is consistently warmer. Relatively clear water is also necessary, as kelp depends on light for photosynthesis. Kelp forests are typically found in waters between 1 and 24 meters below the low tide mark; the tops are often partially exposed on very low spring tides, with the tops of the kelp sticking 20 to 30 cm out of the water. Water clarity is a key factor determining the depth of water a kelp forest can thrive in, as sufficient light must reach the depth where kelp are anchored to the sea floor and first start to grow. A high nutrient content (for example at an upwelling), moderate water movement via wave action or current, and a hard base for attachment are also all necessary requirements for the establishment of a kelp forest ("Kelp Forests", Nybakken 188).

All the above biomes are found in oceans and are salt-water biomes. Despite the ocean biomes making up more than 60 percent of the Earth's surface area, freshwater biomes are also an important part of life. One example of a freshwater biome is the lake. A lake is a body of water surrounded by land. The majority of lakes are fresh water, and most lie in the Northern Hemisphere at higher latitudes. Large lakes are sometimes referred to as "inland seas" and small seas are sometimes referred to as lakes. Many lakes are artificial and are constructed for hydro-electric power supply, water supply, etc. Lakes can be categorized on the basis of their richness of nutrients, which typically effects plant growth. Nutrient poor lakes are said to be oligotrophic, and are generally clear, having a low concentration of plant life. Mesotropic lakes have good clarity and an average level of nutrients. Eutrophic lakes are enriched with nutrients, resulting in good plant growth and possible algal blooms. A hypertrophic lake is a water body that has been highly enriched with nutrients. These lakes typically have poor clarity and are subject to algal blooms. Lakes typically reach this condition due to human activities, such as heavy use of fertilizers in the lake catchment area. Such lakes are of little use, and have a poor ecosystem. There are a number of natural processes that can form lakes. A recent tectonic uplift of a mountain range can create bowl-shaped depressions that accumulate water and form lakes. The advance and retreat of glaciers can scrape depressions in the surface where lakes accumulate. Lakes can also form by means of landslides or by glacial blockages.

A Definition of Biomes. (2021, Oct 31). Retrieved from http://envrexperts.com/free-essays/essay-about-definition-biomes 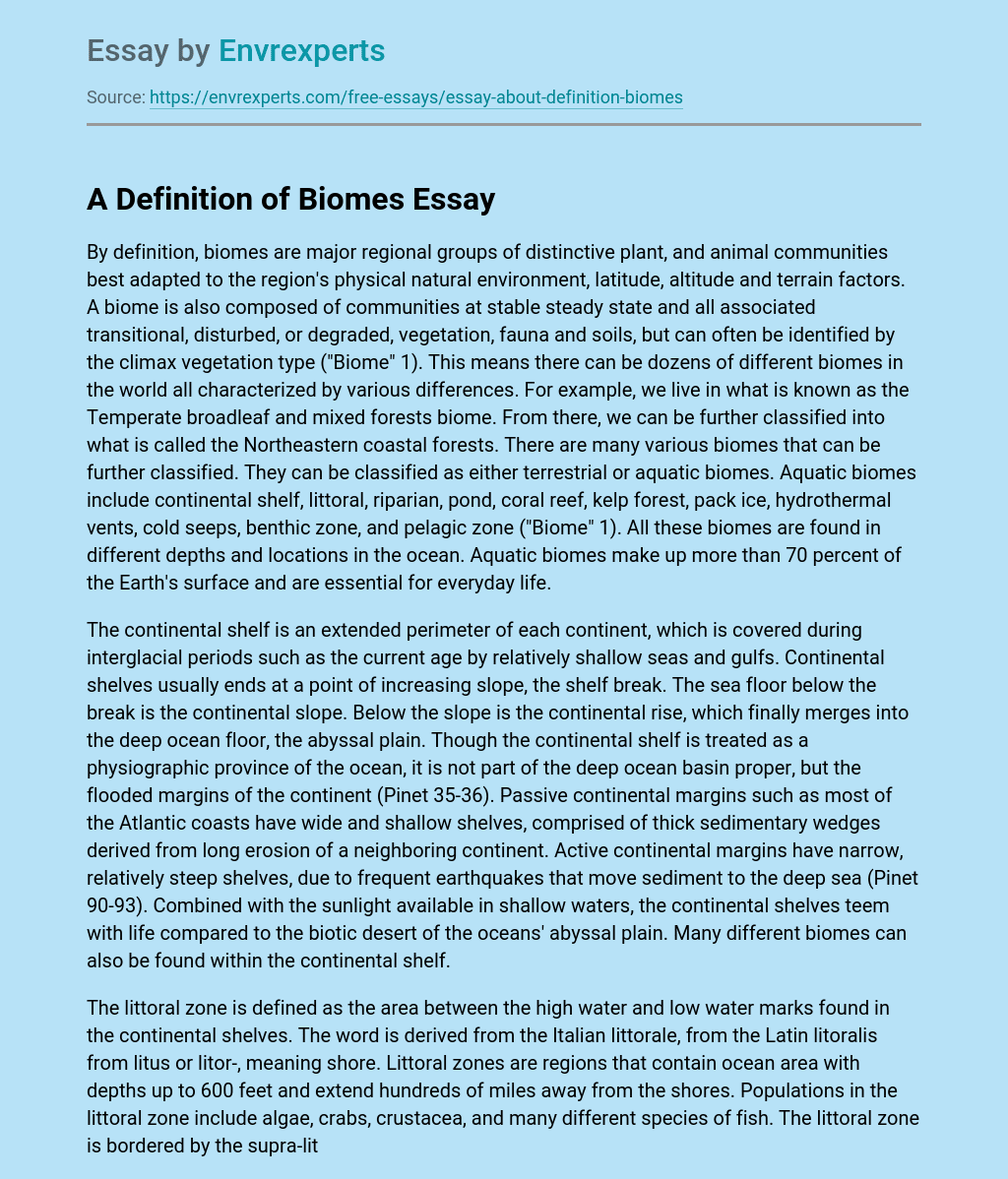