Definition, Effects, Causes and Methods of Prevention of Acid Rain

What is acid rain? Acid rain is caused by emissions of sulphur dioxide and nitrogen oxides. Although natural sources of sulphur oxides and nitrogen oxides do exist, more than 90% of the sulphur and 95% of the nitrogen emissions occurring in eastern North America come from human origin. These primary air pollutants come from the use of coal in the production of electricity, from base-metal smelting, and from fuel combustion in vehicles. Once released into the atmosphere, they can be converted chemically into such secondary pollutants as nitric acid and sulfuric acid, both of which dissolve easily in water.

Don’t waste time
Get a verified writer to help you with Definition, Effects, Causes and Methods of Prevention of Acid Rain
Hire writer
$35.80 for a 2-page paper

The resulting acidic water droplets can be carried long distances by very strong winds, returning to Earth as acid rain, snow, or fog.

Who is affected? Basically every one who comes in contact with acid rain is affected. Among one of the serious side effects of acid pollution on humans is respiratory problems. The SO2 and NO2 emmisions give rise to respitory problems such as asthma, dry coughs, headaches, eye, nose and throat irritations.

An indirect effect of acid rain on humans is that the toxic metals dissolved in the water are absorbed in fruits, vegetables and in the tissues of animals. Even though these toxic metals do not directly affect the animals, they have serious effects on humans when they are being eaten.

How did it happen? One of the main causes of acid rain is sulphur dioxide. Natural sources that let out this gas are volcanoes, sea spray , rotting vegetation and plankton.

However, the burning of fossil fuels, such as coal and oil, are largely to be blamed for about half of the emissions of this gas in the world. When sulphur dioxide gets in the atmosphere, it oxidizes to first form a sulphate ion. It then becomes sulphuric acid as it joins with hydrogen atoms in the air and falls back down to earth in the form of acid rain, snow, or fog. Oxidation occurs the most in clouds and especially in heavily polluted air where other compounds such as ammonia and ozone help to speed up the reaction, changing more sulphur dioxide to sulphuric acid.

When did it start? Since acid rain is emmited from natural sources such as volcanoes, sea spray, rotting vegetation and degasing plankton, acid rain has always been around. Although the first recorded acid rain "storm" was in 1944 when readings of PH 2.4(as acidic as vinegar) were recorded during storms in New England.

Where is the problem? Acid pollution ranges everywhere from the U.S.(the world's biggest producer of sulfur dioxide) to the Arctic(the world smallest producer of sulfur dioxide). Because of prevailing winds acidic water droplets can be carried long distance, returning to earth as acid rain, snow or fog. Canada, for example, produces about half of it's own acid rain and imports the rest from the U.S.

Then there are smokestack scrubbers. Scrubbers capture sulfur from smoke before it enters the air. The captured sulfur is mixed with other things, such as lime. This creates a semiliquid which looks like wet cement. This also becomes a problem. The captured sulfur has nowhere to go. One power plant can capture an amount of 400 tons of sulfur mixture a day.

Then there's the last way-search for alternate energy sources. One alternate source is nuclear power, but some believe this source may create problems even worse than acid rain. Other sources include solar power (power from the sun) and wind power. These two sources have hardly ever been tried. 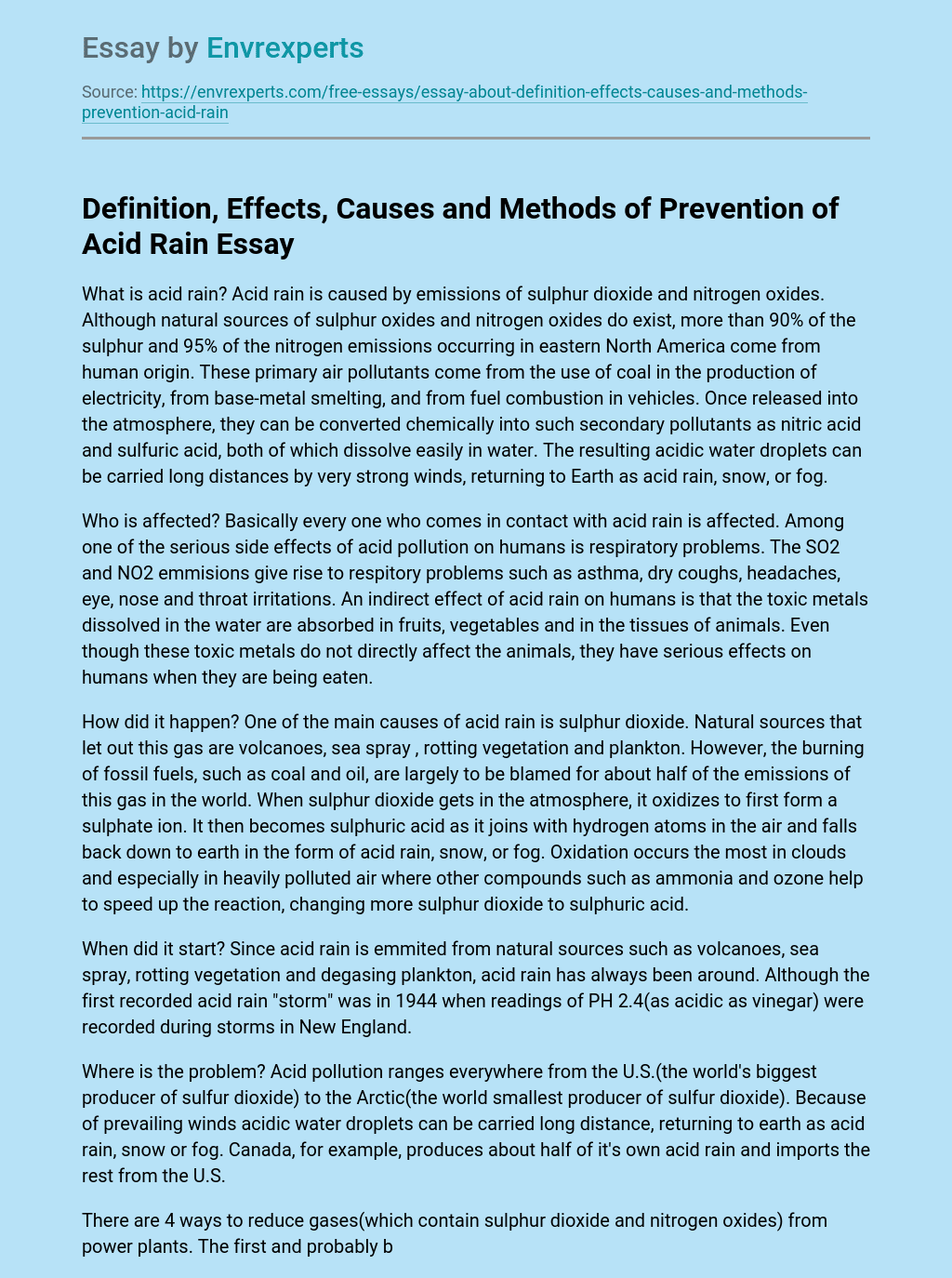