Environmental issues are hazardous and problematic effects of human activity in environmental areas. They have enormous impact on climate, land, animals, human beings and whole natural ecosystem. Those affections can make many people die and change whole infrastructure of one part of a land. In this article, it is going to be told about huge environmental disaster which appeared near Mississippi River Delta in Gulf of Mexico in 2010. That was the biggest oil spill in United States history, which actually not only damaged the sea life and whole coast areas but also affected generally the planet Earth because of ocean streams.

Don’t waste time
Get a verified writer to help you with Definition of Environmental Issues
Hire writer
$35.80 for a 2-page paper

First of all it will be better to overview the area and specifications of bio life in there. The Gulf of Mexico The Gulf of Mexico is a part of the Atlantic Ocean and a margin sea which is bordered from north to south coasts of North America continent, from southwest and south to Mexico and from southeast to Cuba.

The USA states which are Texas, Louisiana, Mississippi, Alabama and Florida are the northern border of the Gulf. It is also one of the most important offshore petroleum production oil-well areas of the whole left side of the world. United States produces one-sixth of its oil from here.

The volume of basin is approximately 2,500 quadrillion liters. The Gulf Stream which originates in the gulf is a warm Atlantic Ocean current and one of the strongest ocean currents known. It also can feed powerful Atlantic hurricanes which can end up with many deaths and environmental disasters.

As an example Hurricane Katrina in 2005 can be given. With that kind of hurricanes, its temperature can be changed from warm to more colder degrees for a while. Those kind of suddenly happened changes in temperature are have an enormous impact on marine life and can end up with changes in climate.

Pollution in the Gulf of Mexico

The huge environmental threats for the gulf are oil drilling and agricultural runoffs. Wrong agricultural practices are polluting area by increasing nitrogen and phosphorus amount in marine ecosystem, which definitely causes algae blooms and produces a huge lack of oxygen. Those actions are making the gulf pollute much faster. The Gulf contains a hypoxic dead zone which is located in east-west way from Texas to Louisiana coast. According to a research made in July 2008, from 1985 to 2008 the dead zone area expanded double and now stretches from somewhere near Galveston, Texas to Venice, Louisiana. Oil Spill Disasters in the Gulf of Mexico 1- Ixtoc I Oil Spill An exploratory oil well which was drilled in the bay of Campeche of the Gulf of Mexico in 1979. Circulation mechanism of drilling mud to the well failed and because of it there happened explosion, blowout and fires which caused destruction and sinking of the rig. 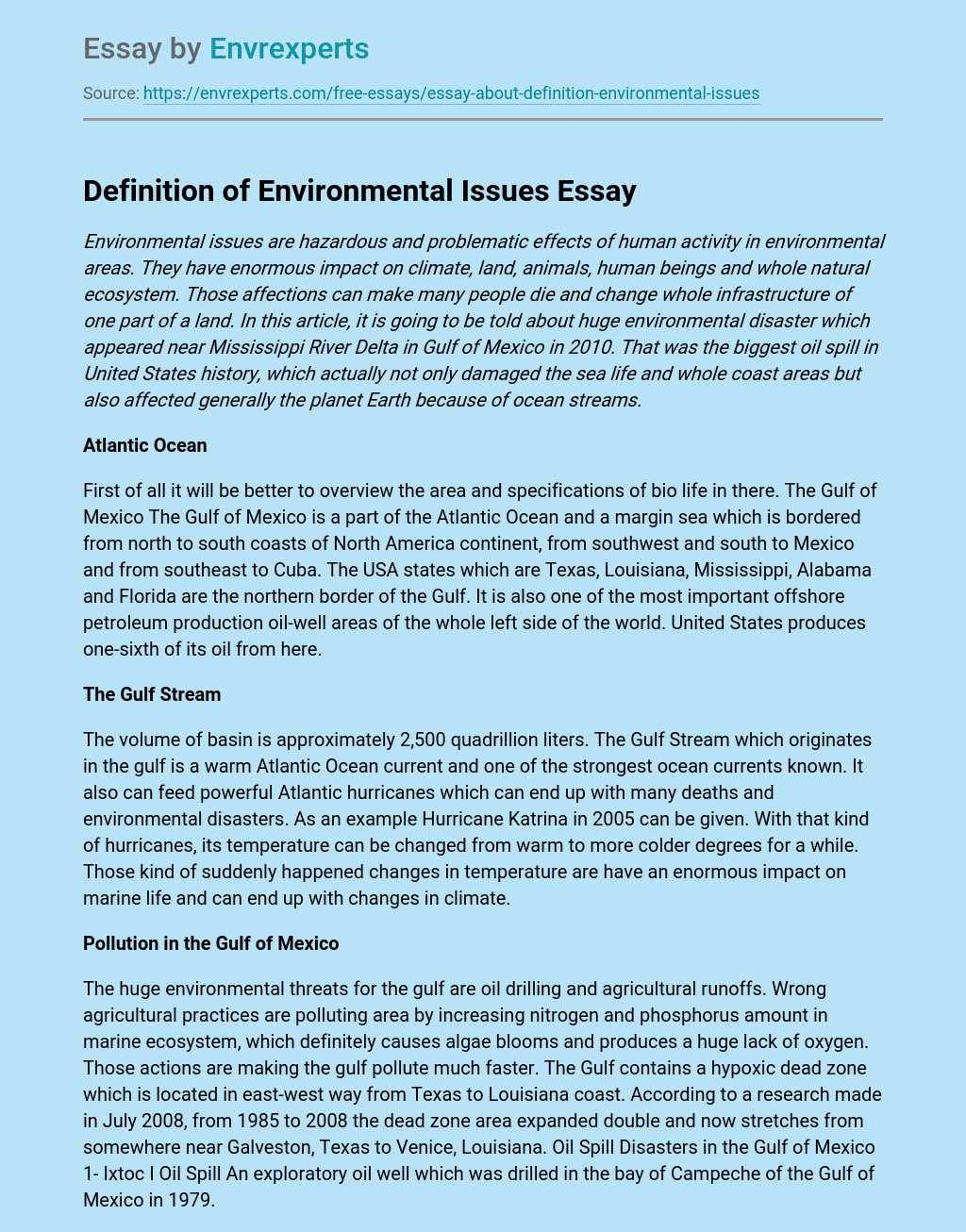