Pesticides: What are they?

Pesticides are chemicals that are used to destroy pests. In the agricultural industry, pesticides are classified into two categories, carcinogenic and non-carcinogenic. A carcinogenic pesticide is a substance or agent producing or inciting cancer. Conversely, a non-carcinogenic pesticide is substance that does not produce or incite cancer. Most agricultural pesticides were registered in the 1950's, with no standard regulations. The most considerable standard prior to the amendments of the Federal Food, Drug, and Cosmetic Act (FFDCA) was, if a revocation of a pesticide occurred, would it have an impact on the prices or availability of food to the consumer? Today, the 208 pesticides used in the United States are regulated by the FFDCA.

With the assistance from other organizations such as the Senate Agriculture Committee (SAC), National Academy of Science (NAS), National Resources Defense Council (NRDC), and Consumers Union (CU), the EPA has made a notable progress. Throughout the years, consumers have pushed for research of the chemicals and substances that produce agricultural pesticides and what these pesticides do to our internal system. Congressman, James J. Delaney was also convinced that too many pesticide chemicals were found in foods. So in 1958, the House Select Committee investigated the use of chemicals in food products and amended section 409 of the FFDCA, in result creating The Delaney Clause.

The bill The Delaney Clause was implemented to avoid carcinogenic pesticides in the United States food supply. According to Congressional Reports, the intent of the bill was to reduce public exposure to a wide range of health effects, including nerve damage, reproductive failure, birth defects, and cancer due to hazardous pesticides. Although these health effects have not been proven in human life form, it has been proven that some pesticides are carcinogenic in lab animals. However, the bill overlooked many aspects of the agricultural industry and encompassed many loopholes. For instance, there were no requirements for the protection of infants and children. Pesticide residues, or rather allowable tolerances, were based on economic benefits. In other words, would it have an impact on the prices or availability of food to the consumer? If the pesticide was deemed carcinogenic, it was prohibited to weigh the benefits in the production of raw and processed foods. Furthermore, farmers had no obligation to inform consumers of the pesticide tolerances and residue levels. The bill, "prohibited the approval of food or feed tolerances for pesticide residues in processed food or animal feed if the pesticide is found to induce cancer in man or animals, regardless of the level of risk." (Congressional Research Service: Report for Congress. 1995.) Nonetheless, the EPA interpreted the language of the amendment to mean "de minimis", meaning low carcinogenic levels.

Petitioners seek review of a final order of the EPA permitting the use of four pesticides (Benomyl on citrus and rice, Mancozeb on barley, grapes, and rye, Phosmet an insecticide, and Triflualin a Herbicide] as food additives although they have been found to induce cancer. Petitioners challenge the final order on the ground that it violates the provisions of the Delaney clause, which prohibits the use of any food additive that is found to induce cancer.

(FindLaw.com, Line 18) Les vs. Reilly settled on July 08, 1992. The case established the EPA's legal responsibility to revoke certain carcinogenic pesticides found in raw and processed foods, no mater how small the risk. In result, under the provisions of the court, EPA has proposed to revoke nine "de minimis" pesticides. Lynn Goldman, EPA Assistant Administrator for Prevention, stated "This administration remains committed to comprehensive reform of our pesticide food safety laws, to establish a consistent, health-based standard for all pesticide residues in food. A standard is needed that will protect everyone, especially children…until then, EPA must comply with the Delaney Clause as it stands [after the verdict was rendered]." (Qtd. in Metro News Brief. Interview.) While the resulting actions of this case were based on legal grounds, EPA is continuing to evaluate all 208 pesticides involved as part of its ongoing re-registration program. But what are the EPA's re-registration standards? The 1996, Food Quality Protection Act, sets an exorbitant new standard.

In 1996, both Houses passed The Food Quality Protection Act also known as "The Nation's New Pesticide Law", crafted by Congressmen Henry Waxman and Thomas Bliley. The bill was enormously created in part of the "1993 report by the NAS, Pesticides in the Diet of Infants and Children." (Fenske, Line 20) First, the legislation has significantly proven to protect the public from the most hazardous agricultural chemicals. Second, the legislation has resolved long-standing differences between the pesticide industry and environmental groups. Third, it has forced the pesticide industry to think of the consumer and not in terms of cost-benefits, or as an economic benefit. Last but most significantly, the legislation sets an extremely strict new standard to protect consumers from pesticides in their diet. However, the bill has also opened a new can of worms. What is the EPA's, the consumers, the agriculture and pesticide industries responsibilities? Ten years ago, it was the consumer's responsibility.

The pesticide Alar, used on apples, was found to have poisoned bordering water reservoirs. Neighboring communities' were complaining of like symptoms. Although no intense research was brought about, it was confirmed the pesticide used in the nearby apple orchards poisoned the water. In 1988, "60 Minutes" aired an unproven report that set off a scare over the pesticide, Alar. Ten years later, the Federal Government posed "that the U.S. food supply is the safest in the world." (Burros, 14) In response, a representative of the Consumer Union group disagreed and stated, "that in a majority of cases, domestic produce had more, or more toxic, pesticide residues than imported produce." (Burros, 14) Consumer reports (published by the Consumer Union) is swaying to agree with "60 Minutes" unproven report, questioning the toxicity tolerance in the pesticides used on some of the fruits and vegetables consumed. "It's not about fear of food…its about giving people information to make smart choices" Edward Groth, director of technical policy and public service for Consumers Unions, stated to the New York Times. This is not the first publication that has set off a scare in the pesticide industry; a book by the name of "Silent Spring" introduced the world to the ups and downs of pesticides. Although the book opened the worlds eye's to the hazardous effects of pesticides, the matter is still unresolved.
As an aide to consumers, the National Resources Defense Council has summaries containing just the chemical classes of pesticides. (A classified list of pesticides, in which each major class of pesticides is subdivided into chemical classes.) But is it the consumer's responsibility to research what the health-based standard whichever crop is, before putting them in their mouths? Well according to the 1958 bill, the Delaney Clause, yes it was. Growers had no obligation to report the levels of pesticide residues left on crops, to the consumer. According to the 1996 bill, The Food Quality Protection Act, the EPA must prepare an annual list of pesticides that fail to meet the "zero risk" standard. Additionally, they must supply grocery stores with a report of crops in which these pesticides were used and display this information to consumers. The New York Times advised to peel your produce or buy organically grown fruits and vegetables. Some scientist advice only to eat organically grown fruit while other scientist advises not to fear produce. What is a consumer to do?

“Every day, scientists learn more about the health threats posed by pesticides." (Reigart, Line 9) The concern at most, is with the health factors that pesticides may impose in our internal systems. For instance, a child's immune system develops at a rapid rate, in comparison to an adult, therefore a child's exposure to pesticides would be far greater. "It is now well established that relatively low lowlevel exposures to toxic chemicals, occurring at critical stages of development, can cause permanent damage…the results of these injuries may range from poor school performance and behavior to alteration of the reproductive organs." (Reigart, Line 40) With the passing of The Food Quality Protection Act, carcinogenic pesticides will no longer be utilized in the agricultural industry. Several researches and articles I have come across recommend some type of pesticide tracking system". With a tracking system, determining if a pesticide is cancer causing would be based on reliable and valid data, not estimated figures. Furthermore, a tracking system would provide accurate data for cancer maps, researches, and studies.

We can agree the 1996 bill has strictly redefined pesticide regulations. Where pesticides are no longer classified by category of chemicals, but rather what chemicals are in each pesticide. The government is now funding research studies in universities to assist the EPA in its re-registration process. The EPA's re-registration process will retest all 208 pesticides to determine if they are carcinogenic. This type of project will incorporate independent researches as well as projects to produce cancer maps of the U.S. water reservoirs.

In 1998, the government funded the “National Water Quality Assessment Pesticide Synthesis Project" to research any agricultural lands surrounding water areas (i.e. streams, rivers, and ground water) and produce cancer maps. Cancer maps exhibit which waters are fouled and cancerous due to pesticides, industrial chemicals, and other factors. These maps should indicate if any of the 208 pesticides used in the United States are carcinogenic and have contaminated the U.S. water reservoirs due to the floating pesticides or pesticide spills. For instance, Sacramento's Highway 99 closed for several hours due to a pesticide spill on a February day earlier this year. The Sacramento Bee reported it as an accident and a clean up. The Bee did not report what techniques were used to clean up the spill or how long after the spill did the clean up take place. If wind can carry pesticides when they are applied to crops, what is to say that wind or rain can not carry pesticides away in a spill. The data for the maps were provided by the National Center for Food and Agricultural Policy (NCFAP).

The problem with the data is, until the early 90's there were minimal standards for researching, testing, or approving agricultural pesticides. The data the maps were based on are only a few years old. In fact, the cancer maps are based on a four-year spread, 1990 – 1993 and 1995 (no data was available for 1994). The data was collected through solicitation from state to state. In return the states provided estimates on cropland and not on non-cropland, such as non-commercial pesticide usage.

The 1992 Census of Agriculture Report noted, "for some states there were no published surveys or expert opinions from field specialists…pesticide use profiles were assumed to be the same as an adjacent state". The report further concluded the data was sufficient in spite of the limitations…the data would provide a useful overview of the regional patterns of pesticide use based on distributions of crops and the associated intensity of use by compound". With the Food Quality Protection Act, projects now have a standard for researching, testing, or approving agricultural pesticides.
Many organizations have dedicated efforts in regulating the use of pesticides. This paper has defined the term pesticide, and identified possible health effects which carcinogenic pesticides induce in the human body. This paper has differentiated the many organizations and laws that regulate pesticides. Last but not least, this paper has also introduced the many ways the EPA, and other assisting organizations efforts to preserve a strict regulation of pesticide usage. 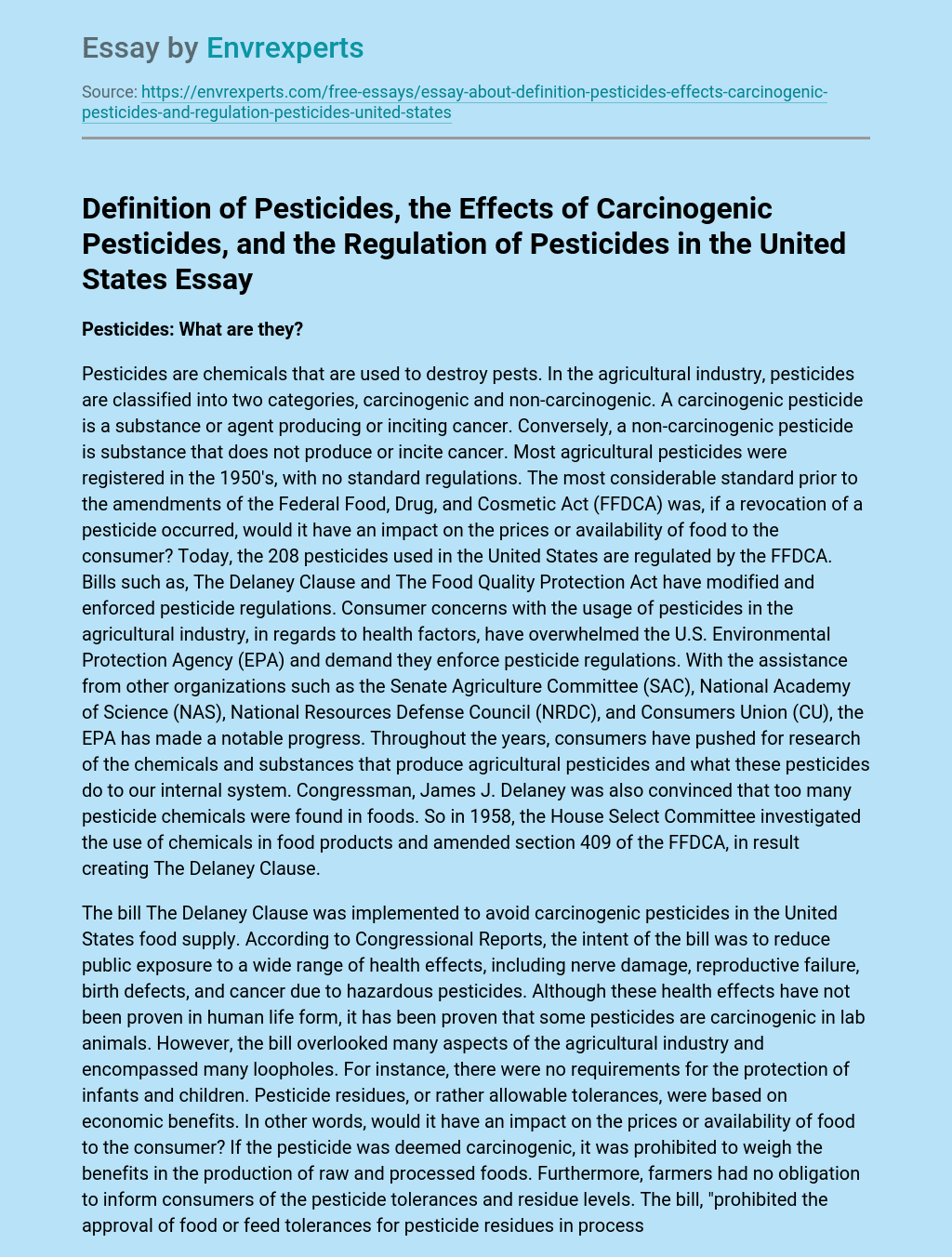