Deforestation: A Cancer to Society

Don’t waste time
Get a verified writer to help you with Deforestation: A Cancer to Society
Hire writer
$35.80 for a 2-page paper

The fact that deforestation is so high is because of the high demand of products that come from the Amazon rain forest in Brazil, there is a very high demand for things such as soy beans and beef, so that we are willing to cut down and burn large amounts of rain forest in order to get those products at the lowest price possible (Tollefson, 2011).

Deforestation is also influenced by how effective the government in those areas are preventing it.

Deforestation is perhaps a problem that will kill humanity slowly if it continues to happen at the rates that it is currently happening. Deforestation increases the greenhouse gas emissions and, therefore increases global warming. Trees take in carbon and produce oxygen, humans take oxygen and produce carbon.

The relationship between humans and trees is very important to our survival, because humans need photosynthetic organisms in order to survive. Trees provide humans with clean air by absorbing most of the harmful greenhouse gases that affect us, such as ground-level ozone, carbon monoxide, and sulfur dioxide (americanforests.org, 2013). A tree can absorb 10 pounds of air pollutants in one year, and produce enough oxygen for two people (americanforests.org, 2013). If we get rid of the trees in the rainforests where would we get oxygen from? Rainforests also produce a high amount of carbon when they are being burned down in order to create land to grown cows and plant things like soy benas, just because we demand them so much. If Brazil and the rest of the world do not find a way to stop the current path of deforestation this could lead to a climate disaster (Fearnside, 2013).

The land that is being cleared from the Amazon rainforests leads to a decrease in rainfall by converting rainforest land into desert like land that has little to no use (Tollefson, 2011).Since the Brazilian land is used mostly for cattle raising (Bustamante et al, 2012), scientists are becoming even more concerned (Bustamante et al,. 2012). Most of the cattle raisers use a method called slash-and-burn; in which they cut down the trees and burn them to make it easier to clear the forest. This slash-and-burn method leads to the destruction of entire habitats. The destruction of large portions of rainforest can result in the extinction of certain species that only lived in the area that was cleared out. Also, it could result in the extinction of certain kinds of trees that could be beneficial to finding a cure to deadly diseases, such as cancer and HIV. This is unethical because it can lead people losing their home, being at greater risks of deadly diseases, and an increase in the ozone layer at the lower troposphere, which could be very dangerous for people living close to the areas where the forest is being burned down (Bustamante et at, 2012). In the rush to get a $1 burger, we do not stop to see that the rights of some people are being violated, just so that we can have cheap meat. Indigenous people live among the rainforests in Brazil and depend on the forest to survive (Savaresi, 2012). Deforestation greatly impacts these indigenous people because deforestation is happening in their homeland (Saveresi, 2012). This is unethical because people are losing their homeland due to the high demand of cheap meat. Indigenous people who inhabit these areas have a right to live there, and no one should force them out of their homes, just to clear out a space of rainforest and raise some more cattle.

Deforestation in Brazil is also unethical because deforestation leads to high epidemics of a deadly disease called malaria (Patz and Olson, 2010). Indigenous people living in the rainforest should have a basic right to live in a healthy environment. It is unethical to expose these people to higher risks of malaria just to get the cheap products produced when the rainforest is cleared. Also, given the fact that Brazil supplies most of the world with cheap meat, that means a lot of deforestation (Bustamante et at,. 2012). These increase in malaria greatly impacts the people living close to the areas cleared by deforestation, but it could affect the U.S. as well. People in the U.S. might travel and bring home the disease passing it to other people in the U.S. The consequences would not be the same since the U.S. is a more developed country that has the resources to deal with such epidemics. This is not the case for developing countries like Brazil. Deforestation mostly affects developing countries since that's where it happens the most (Tollefson, 2011).

There are many laws that are in place to protect illegal deforestation and to put limits on it. However, the amount of deforestation depends on how well the country in doing politically (R.M., 2013). A weak government will not have the power necessary to implement the strict laws against deforestation. The House of Representativespassed a bill to reform the law that governs forests; this lead to an increase in deforestation. Since the law supported agribusiness and did not prosecute them for illegal deforestation that happened before 2008, scientists think that the law will lead to an even greater increase in deforestation, but for now landowners in the amazon must maintain 80 percent of their land covered by forest (Tollefson, 2011). During COP-18 in Doha Brazil refused to receive an assigned amount of emissions and rather agreed to a voluntary objective, but Brazil will only accept an assigned amount after 2020, and only if the rest of the world does too (fearnside 2013). Reducing emissions from deforestation and degradation (REDD) is also very controversial since it could be good or bad at the same time. REDD could achieve reductions from deforestation and degradation in a cheaper and faster way;however, it could also be used as an excuse for using carbon credits that would allow fossil fuel emissions that are unnecessary (fearnside 2013).

Brazil also has an Amazon fund to receive donations that would be used to reduce deforestation and reduce the emission of greenhouse gases (fearnside 2013). However, the fact that Brazil will only accept a voluntary assigned amount of carbon emissions will not be enough to decrease deforestation. If Brazil had an assigned amount, they would be forced to follow it because there would be consequences if they failed to; however, with a voluntary objective there are no consequences if they fail to meet their certain goal (Fearnside, 2013). Even though REDD has no legal agreement binded to it, the United Nations Framework Convention on Climate Change (UNFCCC) does, and it has been able to put considerable restraints towards institutioncooperation (Savaresi, 2012). REDD has been proven successful to protect the human rights of indigenous people who live in the forests. Forests where indigenous people live can't be destroyed unless corporations have informed the indigenous people, and they have agreed to it (Savaresi, 2012).

Air pollution is a very serious problem for our generation, because now in some places we are not able to breathe clean air. Deforestation and degradation fire emits most of the biomass burning emissions (Tsao et al,. 2012). Even after the land has been cleared from the forest, the use of that land also pollutes the air in high amounts (Tsao et al. 2012). Deforestation in Brazil only emits 15% of the greenhouse gas emissions for the entire world; however, it emits 75% of Brazil's greenhouse gas emission (Tollefson, 2011). Therefore, air pollution is mostly affecting people in Brazil, specially the indigenous people who live in the rainforests and are exposed to the pollution in greater amounts (Tollefson, 2011).

Land owners use burning as a cheaper way to clear the land to continue using it (Tsao et al, 2012). When the forest is burned down it releases CO2 and other greenhouse gases, leading to a high amount of pollution (Aguiar et al. 2012). People who reside in the areas where the forests are being destroyed not only have to deal with very high amounts of air pollution but also with higher vulnerability to deadly diseases. A team of scientists found out that in the areas close to where deforestation happens, cases of malaria increased (Patz and Olson, 2010). The mosquito called Anopheles darlingi likes to live in places where the forest has been cleared, and this type of mosquito is the primary carrier of malaria (Patz and Olson, 2010). There has been a direct correlation in the amount of forest land cleared and the increase in malaria epidemics close to those places (Patz and Olson, 2010).

Now when we look at how deforestation affects us here in the United States or even here in California, we face a different problem. Deforestation leads to weather and climate change here in California, and if we have weather conditions that we are not used to, it could be very dangerous. The greenhouse gas emissions released due to deforestation are making our planet warmer and that leads to heat waves, extreme weather events, unhealthy air and water pollutants, and the spread of diseases (EPA.gov, 2013). Unhealthy air due to air pollution can lead to many kinds of diseases. According to (EPA.gov, 2013) starting in 2008, about 126 million people in the U.S. resided in counties with bad air quality, meaning that they did not meet the national air quality standards. Increased air pollution causes an increase in ground level ozone, which leads to bad air quality. Bad air quality can damage the lungs and reduce their function; it can also aggravate asthma and other diseases related to the lungs, and it could even be linked to the development of asthma (EPA.gov, 2013).

Deforestation is destroying entire habitats along with species of trees that could be the key in finding cures to deadly diseases. Deforestation is also unethical because it destroys people's homes and puts them at a higher risk of deadly diseases (Patz and Olson, 2010). Even though there are some laws in place to help stop deforestation, the poor political health of developing countries makes these laws weak, and deforestation keeps rising (R.M., 2013). The destruction of the rainforests leads to an increase in air pollution that leads to lung diseases, bronchitis, and asthma and irritates them if they are already present (EPA.gov, 2013). It is extremely important that we stop deforestation because we get most of our oxygen and clean water from rainforests. If the rate of deforestation in the Amazon rainforest continues as it is, we could lose most of the forest in about 50 to 60 years, not to mention the increases in poor air quality that we would be experiencing as deforestation keeps going (EPA.gov, 2013). About three-fourths of Brazilians are sick of deforestation, and they prefer forest protection over agricultural production (Tollefson, 2011). The UN-FCCC and REDD are working hard to reduce or even stop deforestation (Fearnside, 2013). Many people in the U.S. are also starting to take climate change more seriously and trying to prevent air pollution by turning to public transportation and living more green.

Deforestation: A Cancer to Society. (2021, Oct 31). Retrieved from http://envrexperts.com/free-essays/essay-about-deforestation-cancer-society 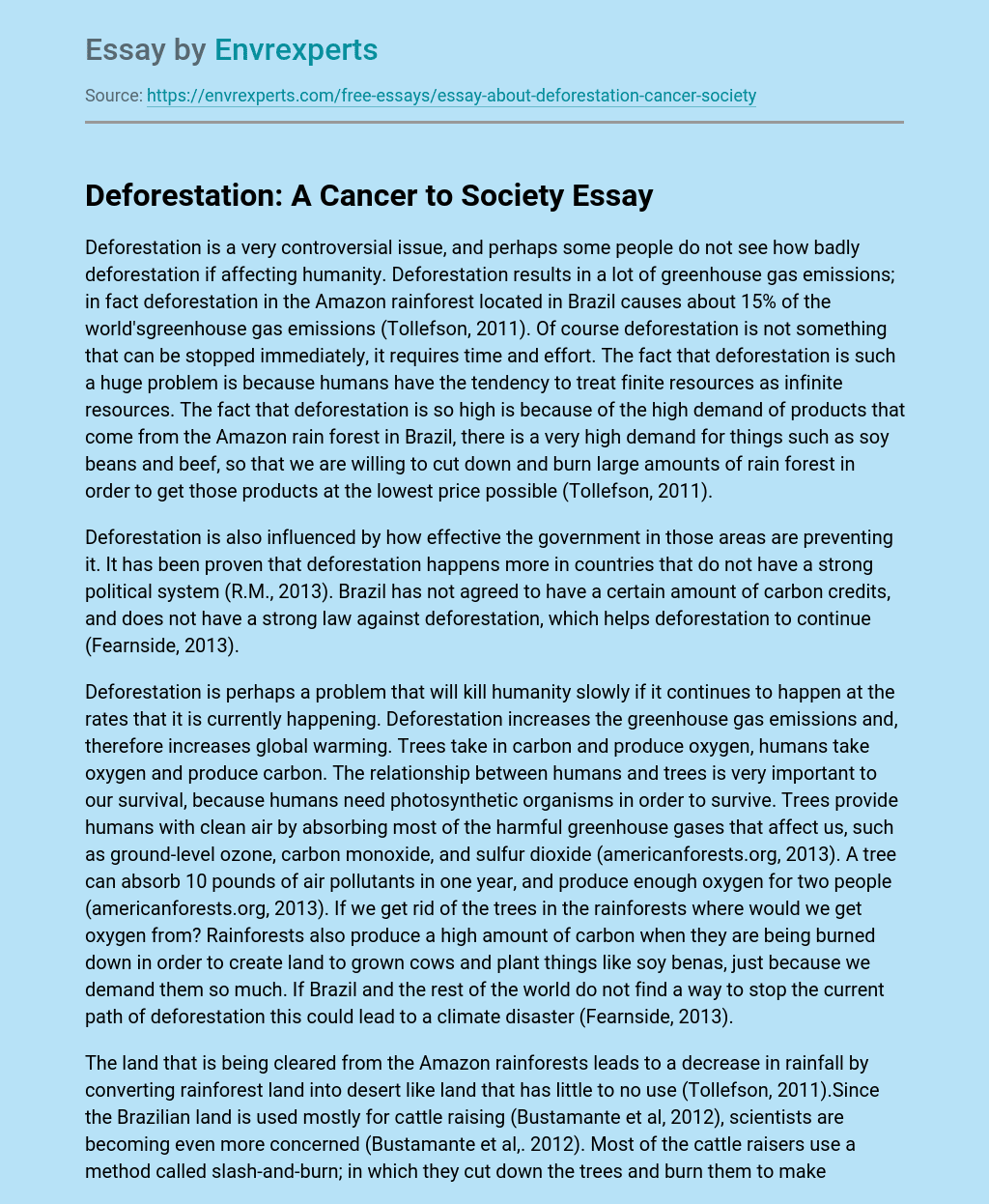