Is Deforestation a Global Issue

Considered as the lungs of the Earth producing 20% of the world’s oxygen, the Amazon is the world’s largest rainforest (Burke, 2019) and the most delicate biodiversity on the planet.

Don’t waste time
Get a verified writer to help you with Is Deforestation a Global Issue
Hire writer
$35.80 for a 2-page paper

WWF estimates that 27 percent-more than a quarter- of the Amazon biome will be without trees in 2030, if the current rate of deforestation continues. The causes of deforestation in this rainforest are cattle ranching (A.Butler, 2019). Deforestation also occurs when forested area is cut and cleared to make way for agriculture or grazing (Derouin, 2019).

The tropical forests of the Congo basin are the second-largest in the world. The rate of deforestation in Democratic Republic of the Congo has remained constant at 0.

In my point of view, the government of Indonesia should pay more attention to deforestation that is happening in the country, as well as, finding long-term local solutions for this problem. According to Greenpeace, more than 74 million hectares were burned or degraded in the last half century. Whereas in 1960, 82% of lands in Indonesia were forests. It decreased into 68% in 1982, 53% in 1995, and 49% in 2017, which presents significant decrease of forest area (Farhani, 2017).

I will address here three research questions: What are the causes, the effects and solutions of deforestation in Indonesia?

Causes of Deforestation in Indonesia

There are several causes of deforestation in Indonesia, but the main cause is illegal logging to open new fields, which develops since people follow their ancestor’s lifestyle to move from an area to another by cutting trees off .Deforestation occurs when timber is harvested, processed, bought or sold in violation of national or sub-national laws. Illegal logging exists because of increasing demands for paper, furniture and building products (Holland, 2017).

Another reason for deforestation in Indonesia is the large scale agriculture for palm oil and small-scale farmers who also want to cash in the growing demand for the product. Palm oil has been receiving attention lately for its potential as a biofuel and its use in many packaged foods and beauty products, Indonesian farmers destroy acres of trees to harvest it .As a result, several countries are currently debating a ban on palm oil as a biofuel (ronca, nd) .

Moreover, deforestation in Indonesia takes place because of building infrastructures. For instance, when making roads, sometimes people have to cut off protected forests or conservation area. (Farhani, 2017). The expansion of road networks in ecologically areas like the Indo-Malayan tropical Asia has increased deforestation.

In addition, climate change is also a cause of deforestation. Tropical rainforests are extremely humid, due to the water vapor released with the oxygen. However, when a forest is cut down, the humidity levels decrease and causes the remaining plants to dry out. For instance, drying out our tropical rainforest increases fire damage, this can be both accidental and intentional but destroys forests rapidly (Holland, 2017).

Effects of Deforestation in Indonesia

Deforestation has many effects. Including, the loss of habitat for animal species, which can harm ecosystems and causes animals to go extinct. According to National Geographic “70% of Earth’s land animals and plants live in forests, and numerous amounts of them cannot survive the deforestation that kills their homes.” (Adrianne Elizabeth, 2019). Some of the main species that are threatened by deforestation are the orangutan, Sumatran tiger and many different species of birds.

Deforestation also affects the 250 million people living in forests and savannah areas. Since they depend on the trees for subsistence and income. Therefore, if many of the trees are deforested, it will cause many complications in their life (Nunez, 2019).

Furthermore, forests act as a source of food, medicine, fuel and other secondary benefits, like tourism for more than billions of people (Food and agricultural organisation, nd). If they’re gone, humans will face lots of conflicts since they are depending on forests.

Trees help to mitigate carbon dioxide and other greenhouse gas emissions, but once they’re cut, burned, or otherwise removed, they become carbon sources. For instance, destroyed vegetation gives off more carbon dioxide in them as they decompose. Around 1.5 billion tons of carbon is released yearly by tropical deforestation (Holland, 2017).

This research made me realize that deforestation is a real issue that has many effects to the world. Unfortunately, it is an increasing danger that will have a devastating impact to the future generations, if governments don’t intervene. However, to prevent further damage of deforestation, people should stop doing it while simultaneously focusing on restoring already damaged areas. I highly agree with the websites whom I read that deforestation is a really common issue the world is facing today.

Is Deforestation a Global Issue. (2021, Oct 31). Retrieved from http://envrexperts.com/free-essays/essay-about-deforestation-global-issue 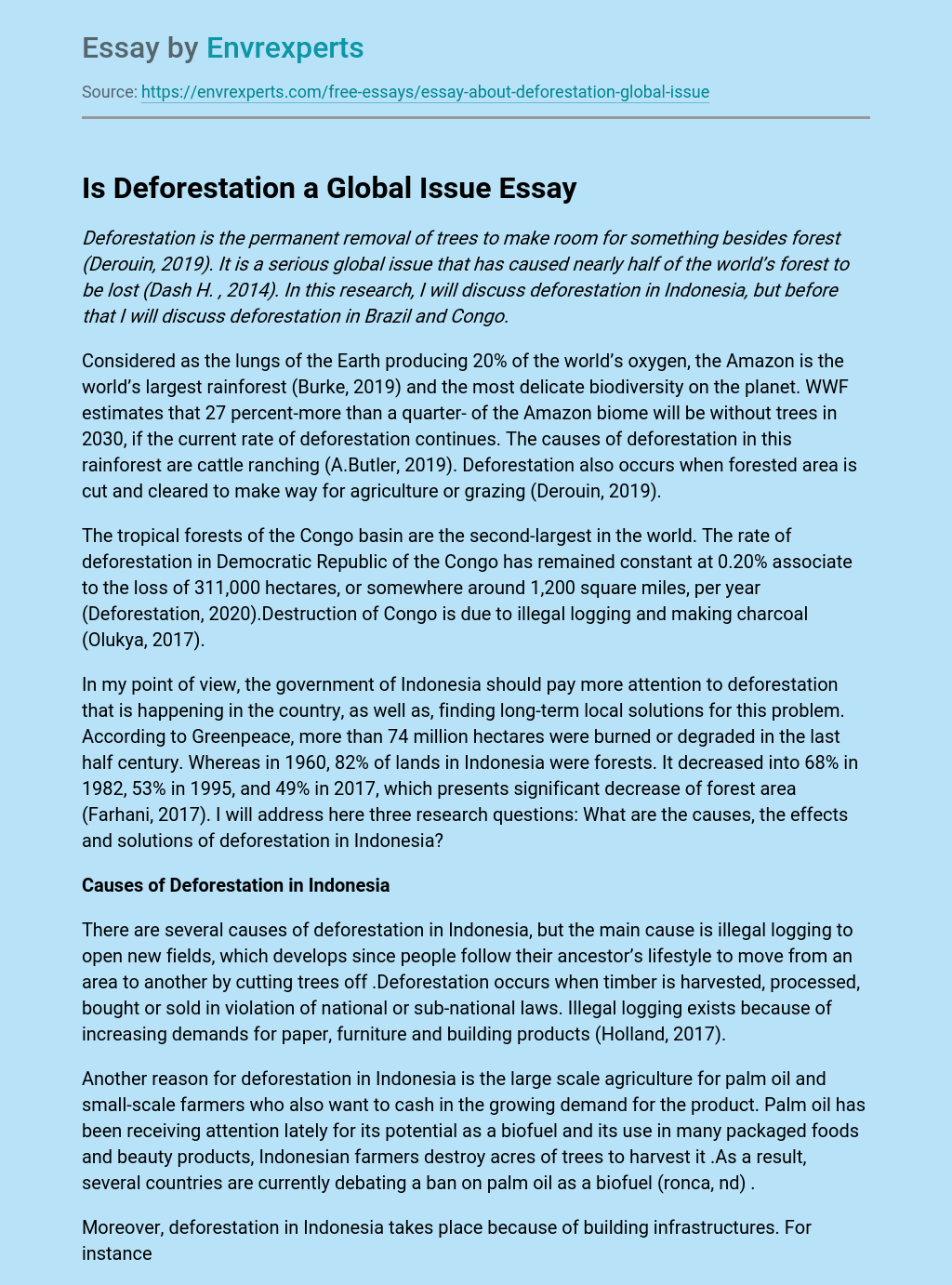