Deforestation: How Biodiversity is Affected

Though many don’t see deforestation as a problem, many tend to neglect the problems at hand. Many animals are going extinct and many are critically endangered.

As said by Reddy Sudhakar, a scientist who a biodiversity project director in India; states that on a grid-based analysis in Telangana India, there are approximately 1095 animals that are extinct. Deforestation is causing a huge impact on the biodiversity in the regions being chopped down. In Jamaica, the impacts of deforestation range from declining water quality and quantity to land degradation.

Don’t waste time
Get a verified writer to help you with Deforestation: How Biodiversity is Affected
Hire writer
$35.80 for a 2-page paper

Although these impacts have been noted, scientists have not done anything to help their problem. The scientists have neglected the problem. Across the globe, especially in the equatorial regions these problems are being completely avoided though that’s where the problems root from. These regions are also the ones most impacted compared to other places. The problems at hand should be confronted head-on and precautions should be taken so that mass extinction doesn’t occur.

Deforestation is putting the survival of species at a high-risk of extinction, it needs to be put into perspective on what damages deforestation is causing on our ecosystems as well as how it is greatly affecting our biodiversity worldwide. I believe that information needs to be shown so that this topic can show just how greatly it impacts on the world and surrounding ecosystems in the regions affected.

With today’s overabundant deforestation there is a 0.33% docking of the worldwide forest coverage. Although that might not seem like much, it still will make a significant impact on the regions affected and all whom inhabit it; especially the species affected.

Many experts believe that deforestation in the damp tropical and equatorial regions might serve as “the largest extinction recorded since the dinosaurs disappearance”. Many don’t take into consideration that this is happening, because they don’t experience it firsthand so it’s not their main concern. The regions that are most impacted are based in the Amazon, as well as Zaire, Papua New Guinea, Indonesia, Columbia, Peru, Malaysia, Venezuela, and Bolivia.

Deforestation causes perpetual impacts on the greenhouse effect, climate, global warming, desertification, biodiversity, displacement of populations, and so much more. Colossal logging as well as deforestation in the Hills and Mountainous regions possess and have generated torrential and erosion phenomena, and lastly land deterioration. It’s unfortunate that many don’t see the beauty until it is destroyed. The forest soils are abundant in plant-assimilable substances deriving from plant as well as animal resolves that acquire yearly. With deforestation, the nutrients that reside in the soil diminish. Large regions that have been deforested have the detriment of promoting erosion on slanted land. This in turn, disturbs the bio-elements cycle which later plagues the bio-climate near the soil as well as other repercussions resulting from the usage of machinery, wood removal, etc.

The causes of deforestation are very divergent, differing from the need of land for the use of agriculture, building roads as well as railways, using the wood for fire, and fuel. It is also used for timber trade, the simple demand for wood, it is used for building homes as a result of population growth, and it is used for building when overcapacity occurs, plus so many more. The forests provide a home for many species, plants and animals alike, which, after the species lose their habitat as a result of deforestation, are in grave danger of extinction. Some companies as well as people who have no relation to the companies have no regard for the lives of others, whether they are human or not. Extinction is very serious, and people need to take that into consideration instead of fabricating the problems at hand and completely disregarding it until it becomes an irreversible problem. Not only does deforestation affect the environment around but it also affects us and will affect our daily lives, so once mass extinction occurs, we all will be impacted greatly.

It has been scientifically confirmed that human-induced changes in forest ecosystems have jeopardized the survival of many species. Knowing this information there is time to take precautions, or even stop deforestation, before there is damage that can’t be undone. Biodiversity conservation has been put as the highest priority throughout the world. It’s poignant to know that we must conserve species because they are endangered due to humans, and us humans realize that what we are doing is wrong but will do nothing to stop the problem at hand or even try to lessen it. It seems that profit is more important than what surrounds us and what keeps us living. A precinct-wise analysis of deforestation during the years 1975 through 2013 points out the highest destruction of forest cover. Knowing that we are still deforesting regions even though we know the consequences is unfortunate. Although some may replant the trees, they still take a while to grow back and the quality of the trees will be less due to the nutrition in the soil the trees would be weakened. So when the trees are fully grown and are ready to be cut down again the quality will be less and houses and products will be less in quality, making the products less reliable.

In Telangana India, based on geographical analysis of deforestation, the investigation has established that 1095 species have gone extinct. 397 species were critically endangered, 523 species were classified as endangered. Lastly, 311 ecosystems were listed as vulnerable. To think that since this report was posted, the numbers have gone up is disturbing. Biodiversity is a wonderful thing and it’s sad that many don’t care about killing off a species. Deforestation can be measured effortlessly by the drop in areal extent of the discrete ecosystem type. The other kind of loss is addressed in quality and it includes revision and or the deterioration in the function, composition and structure of the ecosystem. I like how this shows the us the impact we make on our ecosystems and what our actions are doing to our ecosystem.

It is also revealed analytically that the large-scale deforestation occurred during the 1930 through the 1960 period as well as the 1960 through 1975 period. In Brazil, the land that has been deforested is used for farming soybean and beef cattle grazing. It’s nice to know that the land can be repurposed for further use instead of just being left there, although we should take the steps to make the soil nutrient-rich again so that we can replant those same trees that were cut down. There was a strong growth of deforestation during 1975 to 1980 due to colonization projects and a formation of human settlements for land conjecture along the primary federal roads in the Amazon Region. Examples of these federal roads are Belem-Brasilia, BR-010, and the Cuiaba-Porto Velho BR-364.

While in Jamaica, the community of scientists have broadly neglected deforestation as a problem. The impacts that have been noted range from declining water quality and quantity, soil erosion, land degradation, and the destruction of water sheds. It’s odd that even though these impacts have been noted, scientists have neglected these issues and just completely disregarded them. In the long run, these impacts could be irreversible and destroy their land as well as take away from the quality of their lives. The land could ultimately be uninhabitable and would cause the inhabitants to have to move and relocate elsewhere due to the neglection of the problems at hand. There is a negative correlation with deforestation that recommends that those who are cutting down the forests the quickest are the same individuals that must grow their own food because they lack the income to purchase their own.

A study conducted in South Africa found that there was a positive correlation between people that are willing to pay to support the climate policy, and income as well as knowledge. In a different study, there was a negative correlation between income as well as environmentally subject demeanor. It was also found that women as well as younger participants on average, are willing more than counter subjects to pay for forest conservation. Yet another study of the groupings found that education, as well as age, left political ideology, trust in government, and salience of deforestation have significant effects on those who are willing to pay or willing to support. Individuals who find that deforestation is a less arresting issue aren’t supportive nor are they willing to pay for forest conservation. Knowledge as well as income has absolutely no significant effect on the willingness to pay. The finding could have been due to the fact that there was an economic recession in Brazil, which could have made people mistrustful towards any environmental policy during the period.

Overall, the loss of biodiversity is worrisome, and it affects all of Earth’s inhabitants. For example, the children’s book and movie The Lorax, puts an emphasis on how deforestation affects us as well as how it affects the biodiversity around us. It shows us that companies are willing to do it for a large profit, and that they don’t take into consideration on how deforestation will affect us. It also gives us a visualization of what it looks like when the biodiversity is lost, and the ecosystem is destroyed. Though it seems like it’s light-hearted because it’s meant for children, there is a very large emphasis on the ever-lasting impacts deforestation has. A vast majority of the people who read the book or watch the movie tend to neglect that this is very real and it’s happening on a daily basis.

Deforestation: How Biodiversity is Affected. (2021, Oct 31). Retrieved from http://envrexperts.com/free-essays/essay-about-deforestation-how-biodiversity-affected 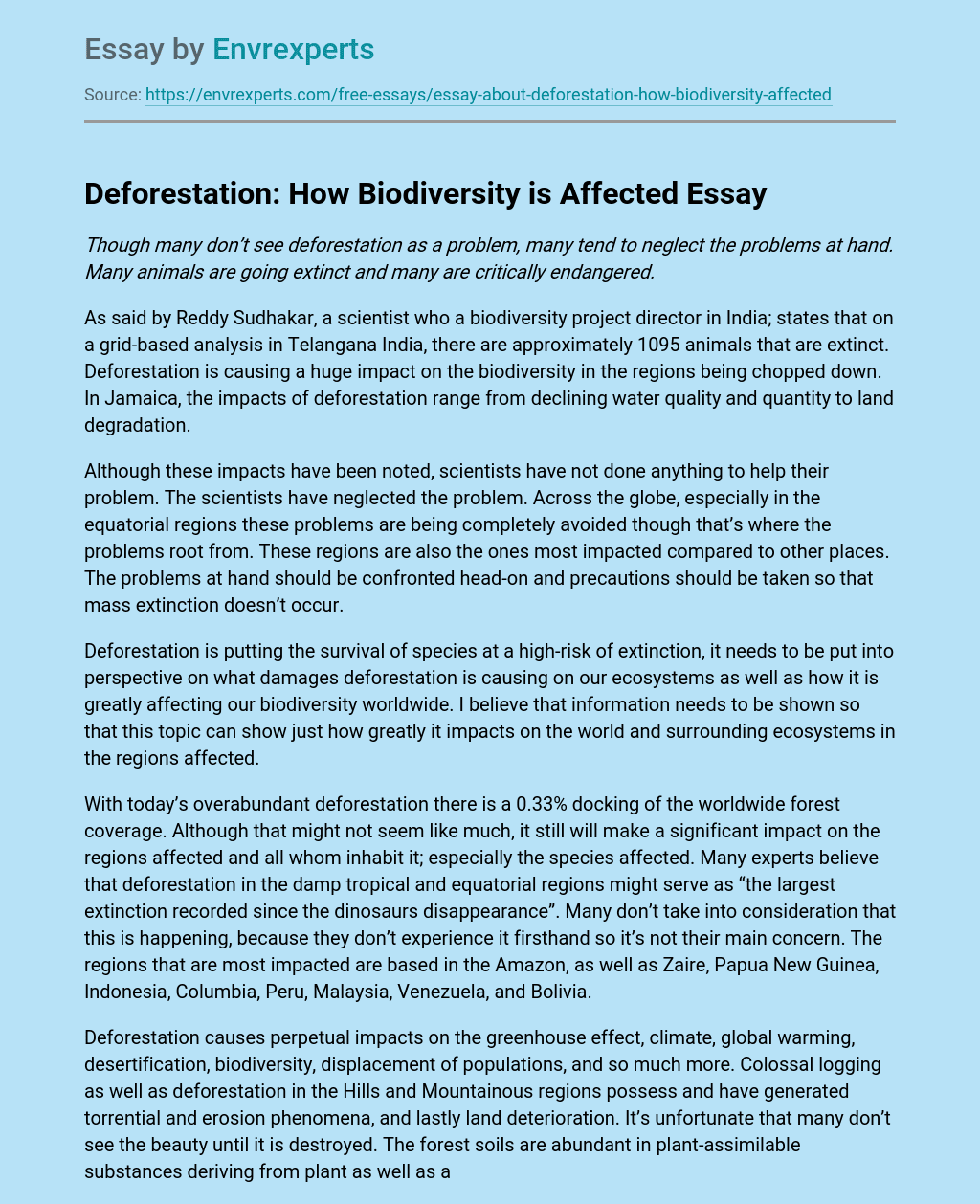