The Depletion of Non-Renewable Resources Through History

Throughout the semester, this course has continuously emphasized the importance of human action to reduce the destruction of the earth as we know it. There have been all kinds of examples of disastrous situations; from mountaintop removal in Appalachia to the drilling of pipelines in South Dakota. A broader topic that encompasses almost all of the issues presented is the depletion of nonrenewable resources. Although this may seem like just a modern-day issue, there are several ancient societies that faced this problem as well–although it did not always end as we hope it will for present-day earth.

Don’t waste time
Get a verified writer to help you with The Depletion of Non-Renewable Resources Through History
Hire writer
$35.80 for a 2-page paper

Thus, it is of the utmost importance that we research in great depth both past and present issues, while being sure to not draw hasty conclusions with little factual basis, in order to gain an understanding of the root causes of major problems and find sustainable solutions.

To begin with, it is important to understand what exactly the problem with the usage of nonrenewable resources is.

Emilio Moran describes why the depletion of resources (known as the “tragedy of the commons”) occurs in his book People and Nature: An Intro to Human Ecological Relations. He says that “as communities grow larger, it becomes increasingly difficult to prevent individuals from pursuing their narrow self-interest, because of the higher value of present benefits of using resources as compared with future benefits which may be compromised by the interim use of resources by others,” (122). Moran goes on to present an example of this being taken care of in previous societies, saying that "in small-scale relatively egalitarian societies, individuals had considerable autonomy, considerable voice in community affairs, and could enforce fair, responsive, even generous behavior from their leaders,” (121).

Jared Diamond takes a similar approach to Moran in his article "Easter's End", which discusses the island of Rapa Nui. Diamond uses the island as a parable for modern-day earth as a whole, highlighting the idea that we could “succumb to the same fate” (63) as the members of these civilizations. He draws several frightening similarities between Rapa Nui and modern day countries, from the quickly growing populations to the abuse of natural resources. These events, he claims, are what ultimately led to the mysterious demise of Rapa Nui, leading readers to draw the conclusion that this could very well happen to earth. However, Diamond closes the article with one difference that brings hope: "unlike the Easter Islanders, we have histories of the past–information that can save us,” (69). The history of ancient civilizations is indeed the key to solving modern day problems, but Diamond committed a crucial mistake in drawing hasty conclusions with no basis in factual evidence. Moran and Diamond both fail to present any scientific evidence in their lessons from previous civilizations, and while their intentions are good, these statements can lead to oversimplified solutions that will be of no help in confronting present and future environmental issues.

In his article entitled “Rethinking the Fall of Easter Island”, Terry Hunt says that when he “first went to Rapa Nui to conduct archaeological research, [he] expected to help confirm [Diamond's] story,” but instead, he found that many of the claims made in the article “Easter's End" were based solely off of speculation. The deforestation Diamond brought up so often did indeed play a role in the societal collapse, but upon scientific research and comparisons to other fieldwork, Terry Hunt and Carl Lipo determined that this was not the driving force in the society's demise; it was merely one of several factors. Disease brought by rodents, conflicts, and violence all contributed to the end of Rapa Nui; not just deforestation and greediness. These conclusions, supported by historical documents and in-depth archaeological research, are immensely helpful, as researchers can then begin to formulate solutions that may have stopped the downward spiral of the island. These solutions can then be applied to current issues in order to begin to veer away from a fate similar to the Easter Islanders'.

Terry Hunt and Carl Lipo's work on Easter Island is immensely helpful, but in order to have a better chance of reaching a solution for modern day problems, it is vital to research other past civilizations as well. The Anasazi people are an example of another mysterious civilization that disappeared, and finding out why could help us avoid similar mistakes on present-day earth. Originally, the Anasazi inhabited the area where the borders of Utah, Colorado, Arizona, and New Mexico collide. In his Smithsonian Magazine article “Riddles of the Anasazi”, David Roberts says that "toward the end of the 13th century, some cataclysmic event forced the Anasazi to flee those cliff houses and their homeland and to move south and east toward the Rio Grande and the Little Colorado River," but for centuries, no one was sure why. Similar to Jared Diamond on Rapa Nui, hasty conclusions were drawn with little factual evidence: early explorers blamed the mass exodus on nomadic tribes. Archaeologists, however, have found nothing to support this claim. Had we spent previous centuries questioning this conclusion rather than accepting it as fact, we may have been able to see the similarities between the Anasazi's environmental issues and our modern day issues. Fortunately, archaeologists took it upon themselves to research the civilization. Using data from plants in the region, scientists discovered that there were glaring environmental problems, including a major drought as well as massive deforestation. These two factors combined resulted in a deficit of resources needed to feed the large population of Anasazi people, which then led to conflict and violence. A New York Times article by George Johnson addresses the complexity of the Anasazi disappearance, noting that "looking beyond climate change, some archaeologists are studying the effects of warfare and the increasing complexity of Anasazi society," and discovering what Johnson calls an “ideological struggle.” Brigham Young University archaeologist James Allison also addresses the combination of issues that must have occurred, pointing out that “climate probably explains a lot … but there are places where people could have stayed and farmed and chose not to,'” (Johnson). This in-depth research and intertwined reasoning is in great contrast to Jared Diamond's hasty, oversimplified conclusions, and is immensely useful in understanding how not to deal with climate change and limited resources in modern times. In the History Channel's video "Demise of the Anasazi”, University of Arizona professor Jonathan Overpeck sums up this sentiment, saying that “there are some important lessons to be learned from what happened here 700-800 years ago for modern society, because what happened back then is the populations were too large to be sustained by the smaller amount of resources they had because of the climate change, and that's probably a similar situation to what we're coming into now.”

Easter Islanders and the Anasazi people shared several similarities, and ultimately the same fate of complete collapse. From Rapa Nui and Jared Diamond, we learned that coming to quick conclusions without scientific evidence will do nothing but force us to come to oversimplified solutions, which will not work in solving modern day environmental problems. From Terry Hunt and Carl Lipo's Rapa Nui studies, we learned that a combination of environmental problems and conflict led to Easter Island's downfall. From the Anasazi, we learned that scarce resources and competition can lead to large, advanced societies collapsing. Pulling all of these cases together, it becomes clear that in-depth research into the failures of past civilizations can be applied to modern times, especially the depletion of nonrenewable resources. Our current state on earth is nearing disaster, and paralleling the Anasazi people and Easter Islanders; we are facing rising global temperatures as well as scarce resources due to exploitation. We have seen that conflicts over such resources have not ended well, and have been major catalysts to complete destruction. Thus, it is absolutely vital that we continue to invest time and energy into in-depth research so that we may rule out faulty solutions and prevent the earth as we know it from facing the same fate as societies of the past. Easter Island and Anasazi are a great start, but there is far more left to be researched and applied. In the end, Diamond got one thing right: history is “information that can save us,” (69).

The Depletion of Non-Renewable Resources Through History. (2021, Oct 31). Retrieved from http://envrexperts.com/free-essays/essay-about-depletion-non-renewable-resources-through-history 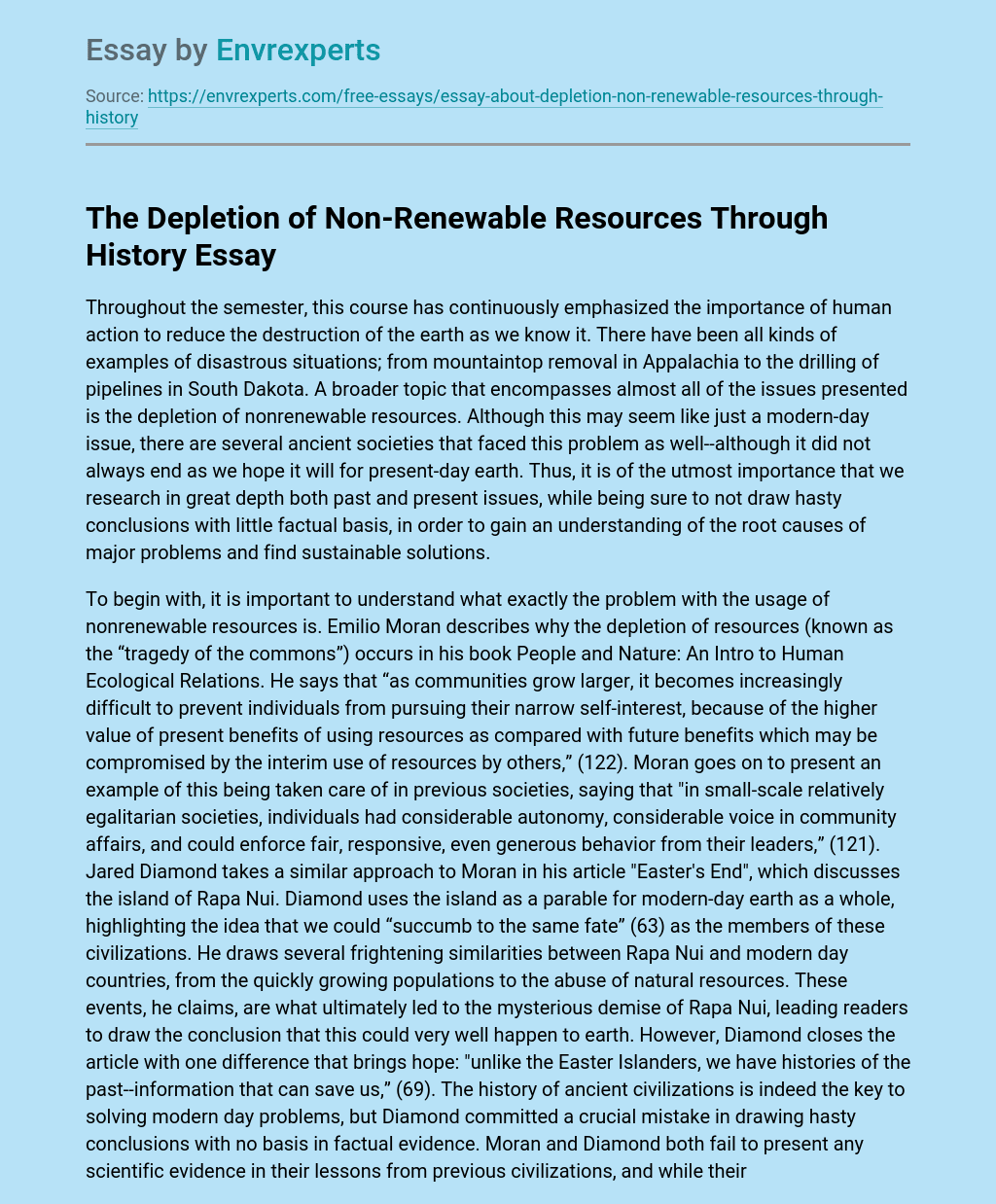