Water around the world is estimated around 70% of the earth, but 97.5% is salt water while 2.5% is freshwater water and potable, the access of clean water decrease day pay day due to increase of population, urbanization and Scio-economic(Facts, n.d.). Half of the world’s populations have water scarcity in each year (Mekonnen & Hoekstra, 2011). So there are different ways that classify the seawater and brackish water from salt in order to produce the clean water that applicable to use for drinking, cooking, washing, and irrigation purpose that adds several dimensions of complexity beyond what is typically involved in the production of drinking water from fresh water sources.

Don’t waste time
Get a verified writer to help you with Desalination of Seawater and Brackish Water Technologies
Hire writer
$35.80 for a 2-page paper

In this review insights into the concept of drinking water production and treatment and the elements that are managed in that process, as well as integrated management approaches for assuring the quality and access safety of drinking water at the consumer’s tap through the world(Oyoh, 2016). according to WHO, 2007 the desalination of seawater and brackish water, managed and planed for using domestic water are rapidly increasing in the world wide in these years.

In order to produce sufficient of water according to the quality and quantity that satisfy the needs and demands of population to become standardized. To improve the quality of sea water and brackish water to protect the disease that they cause for human health, there are many techniques and technologies are widely used in the conditions of absence of fresh water or scarcity of fresh water, the most methods that developed in recent years are Thermal desalination and Membrane desalination(Zotalis, Dialynas, Mamassis, & Angelakis, 2014).

Reports say that there are about 15,000 desalination plants worldwide, with a global capacity of 71.7 million m3 /d. About 60% of feed water used in these plants is seawater (Giorgio, 2013). The most places that are used in desalination waters are Arab regions like Saudi Arabia, Qatar, Bahrain, Oman and UAE that uses approximately 40% over worldwide. Approximately About 50% of the capacity exists in the West Asia Gulf region. North America has about 17%, Asia separated from the Gulf has about 10% and North Africa and Europe considered for about 8 % and 7%, respectively, and Australia a less then over 1%(WHO, 2007). 1.2 objective The objective of this seminar is to review the different desalination technologies of the world water from seawater and brackish water.

There are different types that are used remove seawater and brackish water from salts in order to produce freshwater that is suitable for drinking, washing, irrigation and other purposes for human need. There two main process that separate salt from fresh water and they are thermal and membrane filtration. Each type has its own classification and techniques are being used, all their mechanisms examined in detail with their advantages and limitations(Kucera, 2014). 2.1 thermal desalination processes Is the process that are used heat the seawater or brackish in order to produces pure water, in this process after the heating the water is evaporated and collecting by condensation even though thermal desalination is not used in brackish water due to their high cost. Thermal desalination processes are include multi-stage flash desalination (MSF), multiple-effect distillation (MED), vapour compression (VC), low temperature evaporation (LTE), vacuum freeze desalination (VFD) and solar desalination(Husain, Radif, El-nashar, & Wagnick, n.d.).

Multi stage flash desalination is water desalination process that distills sea water by flashing a portion of water into stream in multiple stages of what are essentially countercurrent heat exchangers. Multi stage flash desalination plants produce about 34% of all desalinated water in the world and mostly they are located in Middle East(Lian-ying, Sheng-nan, & Cong-jie, 2012). The plant has a series of spaces called stages, each containing a heat exchanger and a condensate collector. The sequence has a cold end and hot end while the intermediate stages have intermediate temperature. The stages have different pressures corresponding to the polling points of water at the stage temperatures the highest temperature is about 120°C at the heater brine and lastly cooling down at 40°C(Compain, 2012).

Multi-effect distillation is thermal distillation technology based on evaporation and condensation process in multiple stages called effects, which is mainly used for desalination of seawater and brackish water. The MED represents the most economic distillation process with respect to energy efficiency with low pressure steam source(Compain, 2012). MED distillation takes place in a series of effects (stages), which are all equipped with heat exchanger pipe bundles each effect mainly contains a multiphase heat exchanger. The seawater is either sprayed or otherwise distributed onto the surface of the evaporator tubes in a thin film to further rapid boiling and evaporation. The tubes are heated by steam from a boiler or some other source, which is condensed on the opposite side of the tubes (inside). The condensate from the boiler steam is recycled to the boiler for reuse. Only a portion of the seawater applied to the tubes in the effects evaporates. The remaining feed water is collected and fed to the last effect, from where it is removed by a brine pump. The tubes in the various effects are heated in turn by the vapours arose from the previous effect. This vapour is condensed to a fresh water product, while giving off heat to evaporate a portion of the seawater feed in the effects. This continues for several effects, with 4 or 16 effects being found in a typical large plant. The MED process operates at low temperature that is mostly 40 ° C to 60 ° C, which results in Small to medium-sized plant sizes, reduced scaling risk and reduced operating costs. MED process contains of many consequence stages usually 5-10 but may be more then, maintained at decreasing levels of pressure and temperature, leading from first hot stage to the last by cold stage at condensation(Nannarone, Toro, & Sciubba, 2017).  Multi-effect desalination (MED)(Zrelli, 2017)

The vapor compression distillation (VCD) process is used to heat the source to produce steam from sea water and the vapour is the compressed by compressor. The compression increases the temperature and pressure of steam. The work done in the compressor is chanced into heat. The incoming seawater is used to cool the compressed steam which then condenses to distilled fresh water and the same time the seawater is heated further producing more steam. The VCD is used either in combination with other processes such as the MED, or by itself. The VC units are generally small in capacity, and are often used at hotels, resorts and in industrial applications. Mechanical VCD is an energy efficient, scalable water purification system. It’s simple design and low operation temperature allows for scaling with minimal heat loss to the environment. The process contains three major components: the pre-heater, the evaporator, and the compressor. The most critical component of the system is the compressor-compressing the steam results in a superheated vapor, which is then forced through tubes in the evaporator where the heat is recycled and creates more steam within the system. This results in more water per unit energy versus other water purification systems(Shono et al., 2016). Mechanical Vapor Compression Desalination (Distillation)

Membrane filtration is a mechanical filtration technique which comes as close to offering an absolute barrier to the passage of particulate material as any technology currently available in desalination of seawater and brackish water(Pennsylvania Department of Environmental Protection (Pa. DEP), 2012).

Reverse osmosis is one of the technologies that most widely used method for desalination in the worldwide that has high efficiency and low energy consumption. The RO has semi-permeable membranes which can separate water from a saline solution, when excess of osmotic pressure is applied on the membrane systems. Pressure is applied with a high pressure pump (approximately 70 – 90 bars). Part of the flow (35 to 50%) goes through the membrane, with a salt concentration less than 500 ppm, rest of the flow called retentate (50 to 65%), containing high concentration of salts, doesn’t pass through the membrane and is directly rejected at a high pressure. RO can remove more than 90% soluble salts and 99% colloid microbial and organic matter from the water. It can also remove the inorganic ions, bacteria and viruses, and then high quality pure water can be obtained. So to deal high conductivity brackish water with RO can completely meet the requirements of treatments. The sea water desalination is to solve the lack of fresh water in the coastal city, while the BW desalination by RO can solve the lack of fresh water. RO desalination plant essentially consists of four major systems that are pre-treatment, high pressure pump, membrane system and post-treatment system. The part membrane that rejects the saline water consists of a pressure vessel and a semi-permeable membrane inside that permits the feed water to pass through it. RO membranes for desalination generally come in two types: Spiral wound and Hollow fiber. Spiral wound elements are actually constructed from flat sheet membranes. Membrane materials may be made of cellulose acetate or of other composite polymers. In the spiral wound design, the membrane envelope is wrapped around a central collecting tube. The feed water under pressure flows in a spiral path within the membrane envelope, and pure (desalinated) water is collected in the central tube. As a portion of the water passes through the membrane, the remaining feed water increases in salt content because portion of the feed water is discharged without passing through the membrane without this discharge, the pressurized feed water would continue to increase in salinity content, causing super-saturation of salts.

Electrodialysis reversal desalination (EDR) is a water desalination process in which electricity is applied to electrodes to pull naturally occurring dissolved salts through an ion exchange membrane to separate the water from the salts. EDR produces two effluent streams: a low salinity product or dilute water and a high salinity concentrate. Some electrodialysis membranes can tolerate strong oxidants, like chlorine, but most cannot. The reversal of polarity used in electrodialysis reversal for removal of scale allows operation on water that is saturated with alkaline earth carbonates. Electrodialysis is working a membrane process that uses alternating Anion–selective membranes and Cation-selective membranes that placed between an Anode (+) and a Cathode (-). That is applied to electric field, anions will move towards the Anode and cations will move towards the Cathode due to their different charge they attract. Anions are stopped by the CMs and the cations by the AMs, creating a process flow with low ion concentration (Dilutant) and a process flow with high ion concentration (Concentrate). 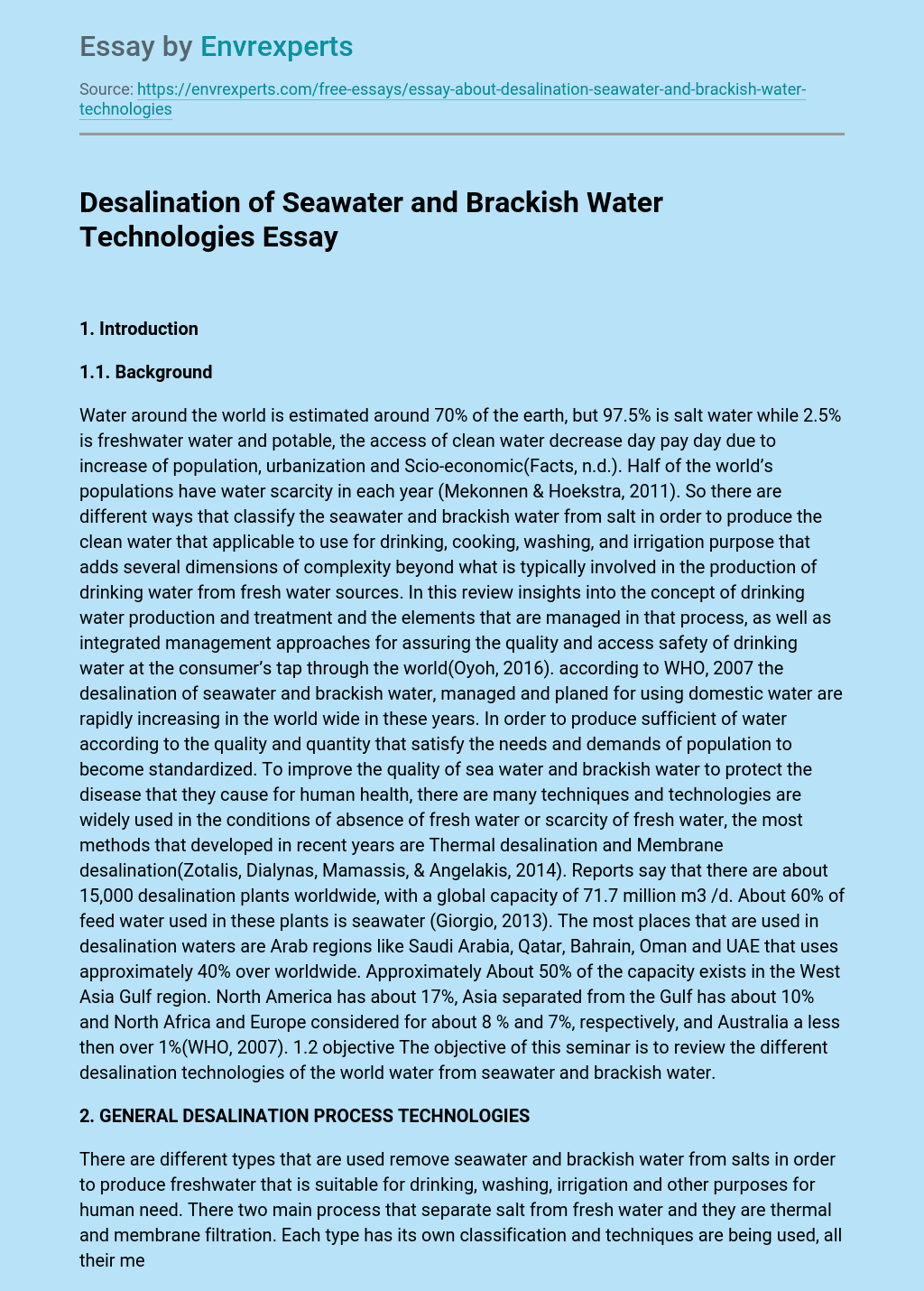