A Description of Aldo Leopold Who is Considered as the Father of Wildlife, Ecology and a True Wisconsin Hero

Aldo Leopold is considered the father of wildlife ecology and a true Wisconsin hero. He was a famous scientist and scholar, great teacher, philosopher, and gifted writer.

It is for his book, A Sand County Almanac, that Leopold is best known by millions of people around the world.

The Almanac is about lifetime love, observation, and thought. It led to a philosophy that has guided many to discovering what it means to live in harmony with the land and with one another.

Don’t waste time
Get a verified writer to help you with A Description of Aldo Leopold Who is Considered as the Father of Wildlife, Ecology and a True Wisconsin Hero
Hire writer
$35.80 for a 2-page paper

He was born in Burlington, Iowa. As a child, he had and interest in the natural world. He spent many hours on adventures in the woods, prairies, and river backwaters of lowa. His many wild hikes in the wilderness guided him to go for a degree in forestry at Yale.

After Yale, Leopold joined the U.S. Forest Service and was assigned to the Arizona Territories. During his term, he began to see the land as a living organism and develop the concept of community.

He became conservation's most important supporter. In 1924, he accepted a transfer to the U.S. Forest Products Laboratory in Madison where he served as associate director, and began teaching at the University of Wisconsin in 1928.

He was credited as the founding father of wildlife ecology. His book Game Management defined the basic skills and techniques for managing and restoring wildlife populations. This work created a new science that included forestry, agriculture, biology, zoology, ecology, education and communication. After its publication, the University of Wisconsin created a new department, the Department of Game Management, and chose Leopold as its first chairman.

In 1935, the Leopold family purchased a worn-out farm near Baraboo, in an area known as the sand counties. Here Leopold put into action his beliefs that the same tools people used to ruin the landscape could also be used to rebuild it. An old chicken coop, known as the Shack, served as a shelter and land laboratory for the Leopold family, friends, and graduate students. Also, here Leopold made many of the essays of what was to become his most important work, A Sand County Almanac.

A Description of Aldo Leopold Who is Considered as the Father of Wildlife, Ecology and a True Wisconsin Hero. (2021, Oct 31). Retrieved from http://envrexperts.com/free-essays/essay-about-description-aldo-leopold-who-considered-father-wildlife-ecology-and-true-wisconsin-hero 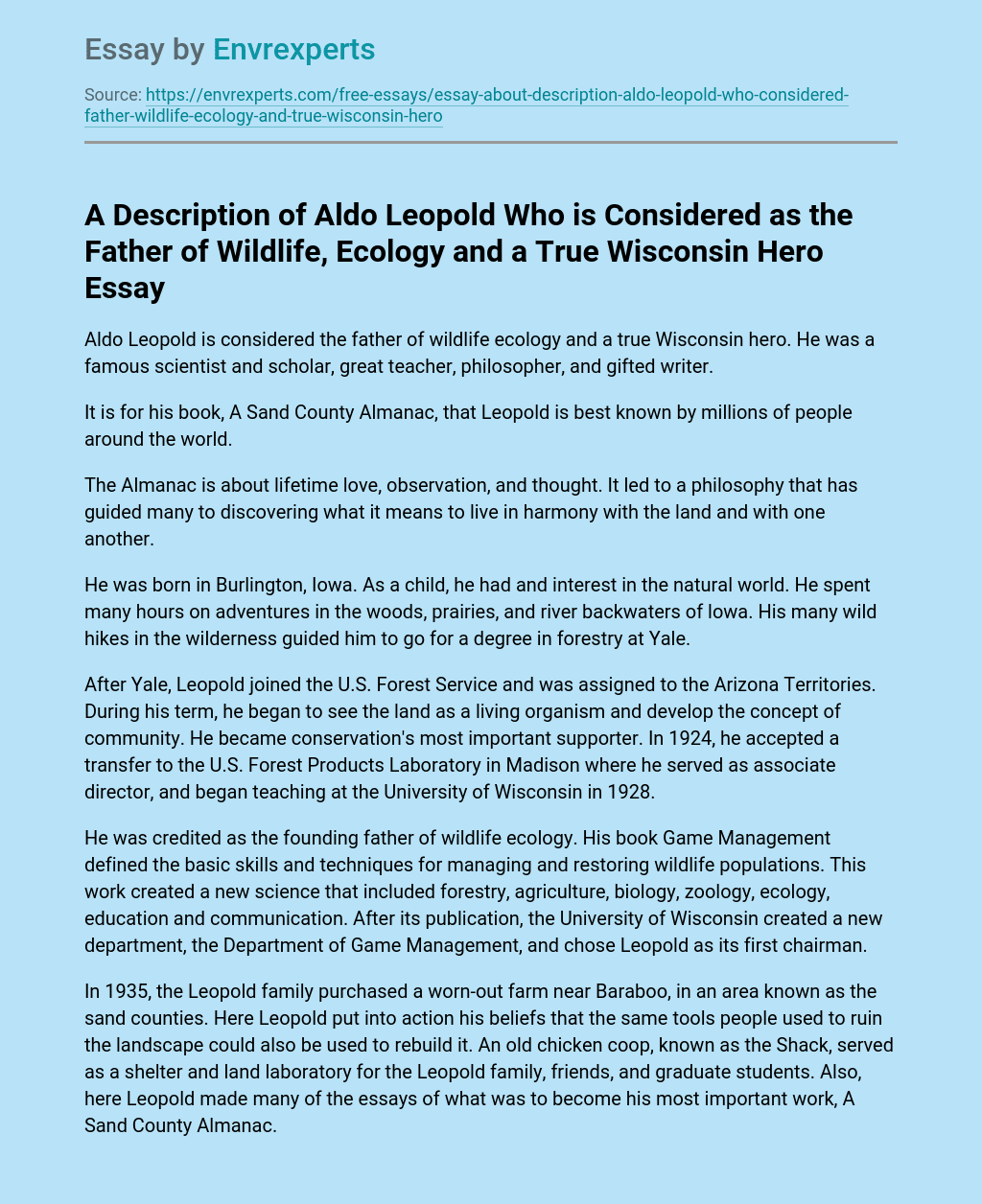