Soil erosion is a process in which the topsoil of a field wears away as a result of natural physical forces of wind, water and other forces that result from activities such as farm tillage. Soil erosion deteriorates soil fertility which results in decreased crop yield. Water conservation is the application agronomical practices such as contour cultivation, crop rotation, and mulch farming to check soil erosion which in turn aids in conserving water in the soil. This paper is going to provide an in-depth description of aspects of soil erosion as well as techniques to conserve water and soil for better soil fertility and crop yield.

Don’t waste time
Get a verified writer to help you with A Description of the Aspects of Soil Erosion as Well as Techniques to Conserve Water and Soil for Better Soil Fertility and Crop Yield
Hire writer
$35.80 for a 2-page paper

Soil conservation of the practice that encompasses using the land in the appropriate manner and conducting management practices that foster the use of soil sustainably and productively to ensure land degradation and soil erosion is minimized. Soil erosion is an outcome of combined forces of water and wind on an already vulnerable soil. (1) The section of land that has experience soil erosion is usually characterized by reduced depth of soil.

This results in reduced moisture storage of the soil as well as reduction of the depth of crops' feeding zone. Different types of agronomy practices exist to ensure that raindrops are intercepted as well as reducing the effects of splash thus enhancing better rate of water intake by soil which results in better soil structure and improved organic matter content of the soil. (4)

Water and the wind result in soil erosion that is usually very prevalent and is regarded as tangible. Chemical or geological erosion is normally a slow process that can take place continuously for many years and is often regarded non-tangible. There is a further subdivision of water erosion which is according to the effects of water erosion. (3)

It referred to as natural erosion that takes place under vegetation cover and includes soil and the eroding processes of the soil that balance that favors and suits the growth of most crops and plants. The slow rate of soil erosion allows for the new soil to be formed and cover the eroded section through weathering processes. The resulting features of this kind of erosion are streams and valleys. (3)

This occurs when the rate at which snow melts or rain falls is quite fast that the soil cannot absorb the water, accumulated sheet of water on the surface moves downhill. Thus, combined efforts of moving water and heavy raindrops on the newly plowed land as wells sloppy continuously washes away the soil on the surface of the land hence resulting in sheet erosion. (2)

Small rills combines with other rills along the slope thus resulting in large channels. The large channels that forms out of the small rills allows large volume of water to collect on these channels which increases their force thus ripping away large pieces of soil. The water starts cutting into the slope when it encounters a sudden drop thus resulting in gully erosion in terms of large channels. Filling the formed gullies requires very specialized cultivation since the formed gullies are quite deep for the machines to cross them. Normally, the presence of destructive gullies signifies rill and sheet erosion that has been persistent for a long duration. (2)

Wind erosion is the process that involves removal of soil by the wind and transporting it to a different location where it is deposited in that location. The blowing wind begins with small amount of soil and plant, as they move on the surface, they pick up other materials which scorches the soil from the ground thus resulting in further erosion. This covers dead as well as growing vegetation with mounds of sand and drifts. When the plants are harvested, the soil they protect is exposed wind erosion. When the wind blows for a long period of time, the soil carried will spread to the whole community. (2)

Methods of Soil and Water Conservation

Practical methods of soil conservation are broadly grouped as follows:

There are different agronomical practices such as contour cultivation, crop rotation, and mulch farming are the crucial mechanisms for conserving the fundamental resources of water and soil as well as checking soil erosion.

It is a type of cultivation that is practiced on sloppy and hilly areas. Because of the faster downward speed of ram water down the slope, very little amount of water is absorbed. Plowing the sloppy areas up and down the slope exposes it to a high possibility of gully development as a result of heavy rainfalls that strikes these sloppy areas.

The flow of water is reduced by the ridges which then allows the contours to capture water that is moving downslope until the soil fully absorbs them. Soil erosion is checked by the rows of plants that are circular across the slopes. Therefore, runoff water is reduced by contour farming which results in reduced soil erosion, an increase in crop yield and adequate water for crops to grow. 2. Crop rotation and mixed cropping:

This is farming practice that involve growing of crops in an order in which the crops that are cultivated follow a given cycle in the same piece of land for a definite period. When the crops mature with the aim of attaining maximum profits with fewer investment inputs while conserving fertility of the soil. This is based on the notion that soil fertility is depleted if the same crop is grown over and over again for a long period of time. Also, soil removal is promoted by clean-tilled crops and line sown. Soil agents are protected from heavy rain drops by thickly grown crops as well as intercepting runoff. Reduction of soil erosion, as well as maintenance of soil fertility, is achieved through proper rotation of crops. Cultivating small grains, row densely planted a crop and spreading legume accounts for a good rotation. (4).

Increasing soil productivity can also be achieved through mixed cropping. In this practice, two or more different crops are grown on the same piece of land. It helps in checking soil erosion as well as avoiding the possibility of crop failure. (5)

Mulch is either mineral or organic materials in nature that is spread on the soil surface for protecting the soil from the direct impact of heavy raindrops, reducing the rate of evaporationand avoid crusting of the surface. Examples of mulch include straw, sawdust, paper, loose soil and paddy husk groundnut shells. Use of mulch helps in conserving the soil as well as moderating the temperatures of the soil. It does not necessitate mixing these materials with the soil nor does it require plowing them into the soil. It requires placing them onto the surface to serve as mulch. Mulch farming is important for maintaining the high moisture of the soil in the field. Therefore, mulching can be practiced during low rainfalls to raise the soil moistures and during high rainfall to decrease the rate of loss of water and soil. Agricultural byproducts such as corncobs, straw, wood chips and manure are among the natural sources of mulch. (4)

It is evident that soil erosion causes a lot of damages to the soil which results in decreased crops yield. Soil erosion results in reduced capacity for soil to store water and nutrients as a result of wind erosion which results in a dry environment and reduced soil fertility. Also, soil erosion results in flooding which causes death of people and animals as well as destruction of prperty. There are different types of soil erosion that is water erosion, geological or chemical erosion, and wind erosion. Water can be conserved through different agronomical practices such as contour cultivation, crop rotation, and mulch farming which also helps in checking soil erosion.

A Description of the Aspects of Soil Erosion as Well as Techniques to Conserve Water and Soil for Better Soil Fertility and Crop Yield. (2021, Oct 31). Retrieved from http://envrexperts.com/free-essays/essay-about-description-aspects-soil-erosion-well-techniques-conserve-water-and-soil-better-soil-fertility-and-c 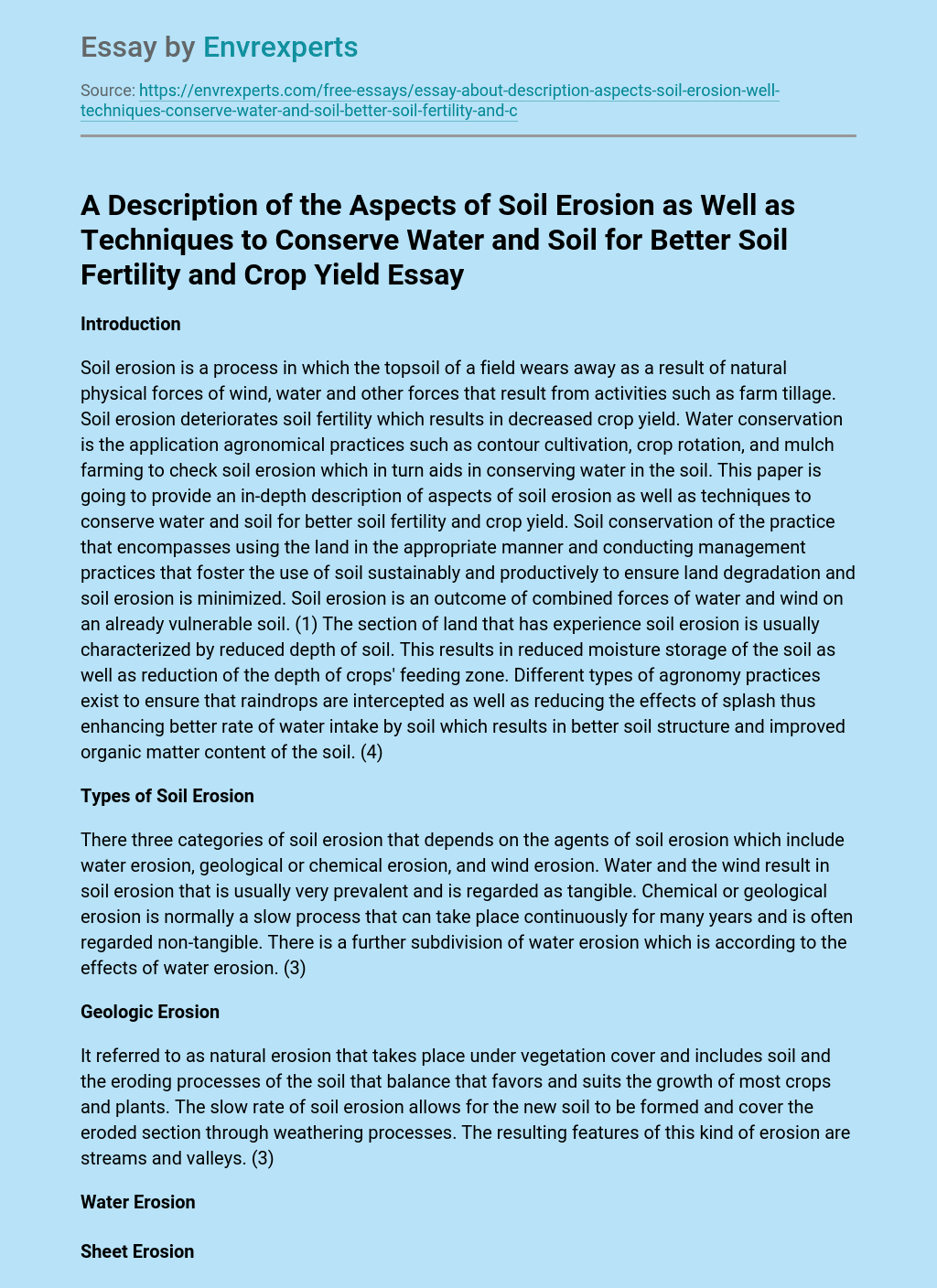