A Description of Controlling Air Pollution

Air pollution entails the presence of chemicals or other harmful contents that can harm the living environment. Air pollution deals with the natural environment including the atmosphere and most gases. It is common in urban centers because of the increasing rate of technological advancements and industrialization. According to Tiwary & Colls, industries and vehicles are considered to be the main pollutants. They produce harmful gases, such as nitrogen and carbon monoxide, into the atmosphere. After having been released, these gases are destroying the ozone layer.

Don’t waste time
Get a verified writer to help you with A Description of Controlling Air Pollution
Hire writer
$35.80 for a 2-page paper

Smoke from industries is also a cause of air pollution, and it affects the living environment, including human beings and plants. This essay expounds on the dangers of the air pollution and reasons why it is difficult to reach a zero percent level of air pollution, in the modern highly technological society.

There are many negative effects of air pollution on the natural environment. Its effects are adverse because it pollutes air that is essential for the survival of human and other living creatures in the environment.

This is because it contains toxins, which are harmful to the human body, and the toxic materials destroy normal functioning of the body. Inhaling these gases causes health problems in the human body, especially the ones related to the lungs. Research shows that people living near industrial areas and those working at the factories and plants face these dangers every day. They experience the most severe effects when it comes to their health; the workers usually suffer from the respiratory diseases because of inhaling these dangerous fumes and gases.

Destruction of the environment is another negative effect of air pollution. It is caused by the fact that air pollution leads to the destruction of the ozone layer, which affects the climate. Research shows that today, many parts of the world experience climatic change due to the destruction of the ozone layer. Agarwal points out that this layer is responsible for protecting the Earth against dangerous sunrays that might result in other adverse effects. These rays affect the skin of human beings, because they are very intensive. Climatic change in the world is a threat to the health of human beings and other living creatures. Penetration of the harmful sunrays to the earth is a danger to humans because of skin cancer threat. The human body has not developed the immunity to protect from the dangerous rays; thus, the cases of skin cancer in the world are increasing today.

Experts claim that the increase in temperatures that many countries across the world are experiencing today is caused by the negative climatic changes. There has also been a change in the rain patterns in most countries of the world. These effects were provoked by the destruction of the ozone layer, which in turn was caused by air pollution. This situation has influenced the agricultural countries, as today it is difficult to predict and determine the rain patterns for the planting and harvesting. This tendency has also led to a reduction in the quantity of agricultural products that these countries produce due to the reduction in rains. Air pollution also has a negative impact on the amount of precipitations across the world, making rains irregular, unlike it had been earlier when they used to be regular, and it was easier to predict the rains.

The air pollutants are extremely poisonous and mostly emanate from cars and industrial objects; hence, there is an urgent need to control air pollution today. Experts say that immediate action should be taken to control air pollution, in order to reduce these affects. They have come up with many solutions, especially for the areas, situated near industrial objects. However, it is a great challenge due to the increasing rates of technological advancement in the world today. Technological advancement comes with the increase in the use of machines in industries and factories, which means production of more fumes. The world cannot do away with the use of motor vehicles because they are an important part in the survival of humans today. However, experts have come up with possible solutions to the reduction of air pollution, caused by cars.

Governments have also made international agreements, in order to fight against air pollution in their countries together. This initiative is likely to help the world ultimately, because each individual country will work towards reduction of global pollution rates.

Another way of curbing the problem of air pollution is grouping industrial objects in the same areas situated away from the residential areas. This strategy is designed to avoid the adverse effects of these gases and fumes on human and their respiratory system. Industries are also encouraged to conserve fuel by recycling so that less emission takes place. This step will ensure protection of the environment including plants and the ozone layer from destruction.

Reducing the amount of some air pollutants is another method of curbing air pollution. For instance, composting waste kitchen materials rather than burning them so that there is no release of the fumes is a promising solution. People should avoid emitting smoke and fumes to the environment and use alternative ways.

In a Technological Society, Is It Possible to Have 100% Clean Air? Is It Feasible or Likely?

It is a great challenge to get rid of air pollution in this era of technological advancement and industrialization. This is because the world today depends on technology for survival; hence; humanity cannot go without it in its lives. It is through technology that people manufacture food, clothes, and medicines and enable many other vital activities, like travelling. Today, life revolves around technology for survival due to the advantages and benefits it has in the world. For instance, it is through technology that travelling has been made easier and manufacturing of products faster. Efforts to reduce air pollution and ensure that there is 100% clean air in the world would imply complete rejection of technology. On the other hand, it is difficult to eliminate technology in the world today due to the benefits that people enjoy by employing it.

According to research carried out by several institutions in different countries, technology is the largest cause of air pollution today. Research shows that many industries depend on technology in their manufacturing processes; hence, they cannot achieve the target of 100% clean air because of the required amount of emissions. Vehicles that are the second issue to cause air pollution to the environment also use technology to operate. Research shows that countries that have the highest levels of air pollution are those that are top in terms of the technological advancements. For instance, a country, like Qatar, produces an average of 56 tons of carbon dioxide each year per person. This is one of the highest rates in the world. It has its attributes in the level of technology that many industries of this country use. Research indicates that many industries employ modern technology, which explains the high rate of carbon emission.

This situation poses the challenge of reducing air pollution and reaching the zero percent pollution rates. Experts find it to be extremely difficult to establish means of eradicating air pollution in the technological era. This situation is because areas and objects that use technology must operate utilities and equipment that emits dangerous fumes and gases to the environment. In consideration of these circumstances, experts have found it almost impossible to have 100% clean air in the world today. A country like Australia also has a high rate of carbon dioxide emission per year because of the frequent use of technology in industries, in the country. It is only possible to reduce the effects of air pollution by reducing air pollution itself. However, it is not likely to be possible to eliminate air pollution, in the era of technology.

It is not possible to reach the mark of 100% clean air in the environment, but it is possible to reduce the rates of pollution. Research shows that experts have been trying a lot to minimize the amount of unclean air in the environment; however, all for nothing. The situation is caused by the reasons described above. Even though, it is possible to reduce air pollution rates in the world, it is not feasible to get 100% clean air. From time to time, new technologies emerge; this fact explains the increase in air pollution rates. Growth in technology implies more industries and factories among many other equipment and machines that rely on technology. Environmentalists argue that people should maintain a 100% clean air, which conflicts with the target of achieving economic development through embracing technological development, in the world.

A Description of Controlling Air Pollution. (2021, Oct 31). Retrieved from http://envrexperts.com/free-essays/essay-about-description-controlling-air-pollution 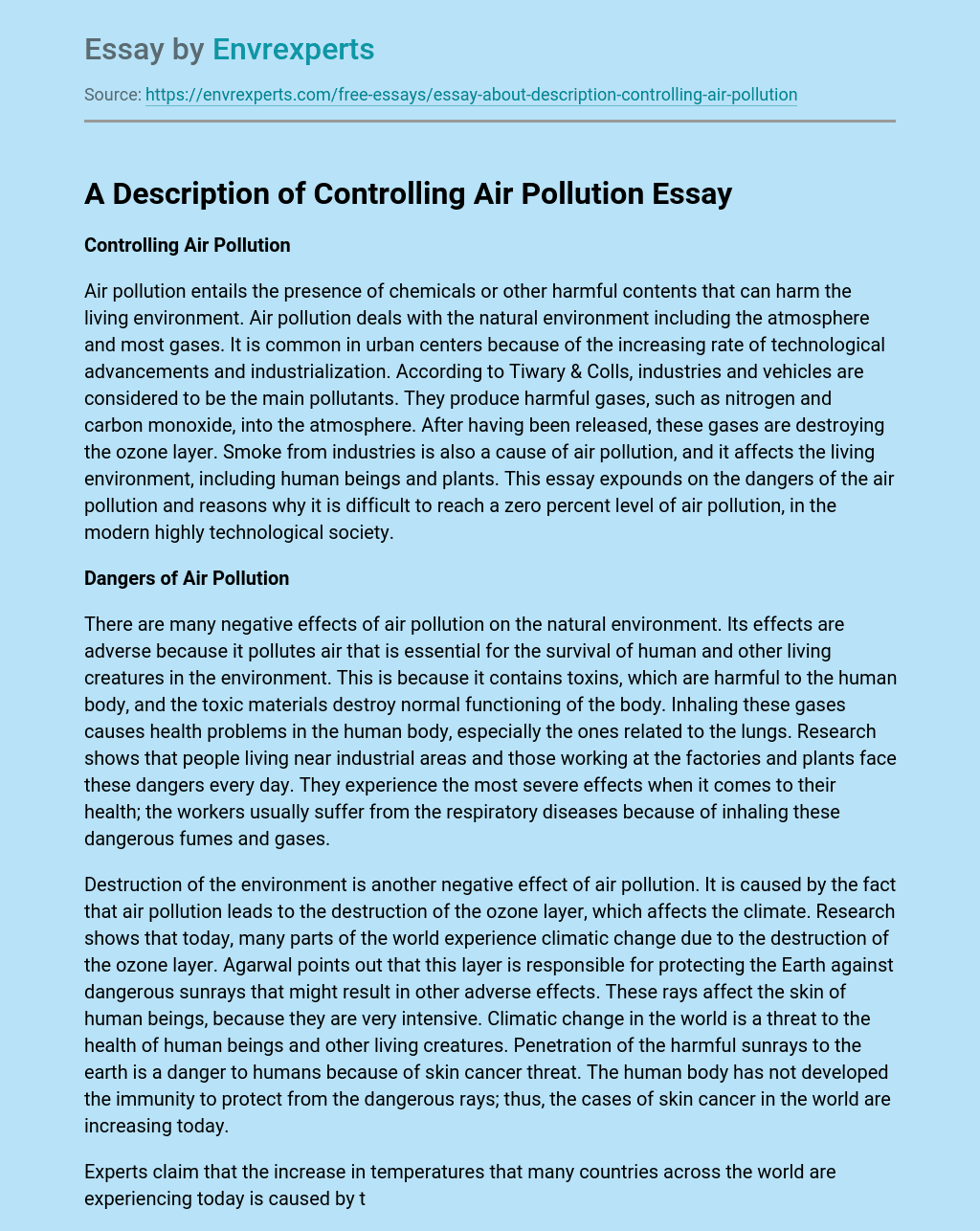