A Description of the Exxon Valdez Oil Spill

Four minutes after midnight on March 24, 1989, the oil tanker Exxon Valdez hit Bligh Reef in Alaska's Prince William Sound. Eleven million gallons of North Slope oil spewed into one of the most bountiful marine ecosystems in the world, killing birds, marine mammals, fish, and devastating the ecosystem. (Exxon Valdez Oil Spill: Could It Happen Again?, 2000, May 10) Exxon claims the Sound has recovered, but environmental groups claim otherwise. Who is right?

This environmental disaster caused more destruction of wildlife then any other in our nation's history.

Don’t waste time
Get a verified writer to help you with A Description of the Exxon Valdez Oil Spill
Hire writer
$35.80 for a 2-page paper

Approximately, half a million birds died including bald eagles, harlequin ducks, marbled murrelets and loons. It also greatly affected fish. Critical spawning and rearing habitats, including over 100 salmon streams, were besieged in oil. In 1993, there was an unprecedented crash of the sound's Pacific herring population. The spill also caused a noticeable decline in pink and churn salmon, dolly varden cutthroat trout and rockfish. The spill even affected habitats on land. Three national parks, three national wildlife refuges and one national forest was oiled.

Since the incident occurred in open navigable water, the U.S. Coast Guard's On-Scene Coordinator had authority for all activities related to the cleanup effort. His first action was to immediately close the Port of Valdez to all ship traffic. An U.S. Coast Guard investigator, along with a representative from the Alaska Department of Environmental Conversation, visited the scene of the incident to assess the damage. The Alaska Regional Response Team was brought together by teleconference, and the National Response Team was activated soon thereafter.

(Exxon Valdez, 2000, May 8) Other agencies were also involved. Environmental Protection Agency (EPA) specialists of experimental bioremediation technologies assisted in the cleanup. The National Oceanic and Atmospheric Administration (NOAA) was involved in providing weather forecasts for Prince William Sound, allowing the cleanup team to adapt their methods to changing weather conditions.

Once help arrived cleanup began immediately. Specialists from the Hubbs Marine Institute in San Diego, California, set up a facility to clean oil from otters, and the International Bird Research Center of Berkeley, California, established a center to clean and rehabilitate oiled waterfowl. Three methods were used in the clean up…burning, mechanical cleanup and chemical dispersants. In burning, they simply tired to burn small sections of the oil slick. However, due to foul weather, this method was not tried again. Mechanical cleanup used booms and skimmers. Skimmers were attachments to the back of boats which filtered the very top layer of water. This method worked well, but skimmers often clogged because of kelp and the heavy oil and repairs were time consuming. Finally they tried dispersants. Dispersants work much like detergent does in your washing machine. It allows the oil to mix with the water, dispersing the oil in a wide area. This does not remove the oil, but is supposed to dilute the oil to a point where it is almost non-existent.

After the cleanup, much was done to prevent this disaster from happening again. Congress passed the Oil Pollution Act of 1990, which required the Coast Guard to strengthen its regulations on oil tank vessels and oil tank owners and operators. Today, tank hulls provide better protection against spills resulting from a similar accident, and communications between vessel captains and vessel traffic centers have improved to make for safer sailing. (Exxon Valdez, 2000, May 8) Exxon reports it has done much to improve oil-spill prevention. It has modified tanker routes, applied new technology to improve vessel navigation and ensure the integrity of oil containment systems. Also, Exxon strengthened training programs for vessel captains and pilots and conducted more extensive, periodic assessments of Exxon's vessels and facilities. Today in Prince William Sound, tugs escort tankers in and out, and a state-of-the-art radar system tracks both ships and icebergs.

Oil containment booms and other response equipment are stockpiled in the Sound and elsewhere in the United States to enable quick and effective spill response. Emergency response teams are trained and stand ready in essential locations. Frequent drills are conducted that include important personnel from industry, government agencies and local citizens advisory groups.

As you can see, many things have been improved since the tragic accident. However, is this enough? Exxon (now Exxon-Mobil) has claimed the Sound is as clean as it was in 1988. Many leading scientists and environmental groups say it is not as clean. Scientific studies of the Sound are still under way today. Most published now state that the ecosystem has been improved, but things will never be what they once were. Studies indicate that in certain species of fish, genetic mutations have already occurred because of the spill. There is no hard-evidence yet, however. We will just have to wait and see to find out the final verdict of the Exxon Valdez's impact.

A Description of the Exxon Valdez Oil Spill. (2021, Oct 31). Retrieved from http://envrexperts.com/free-essays/essay-about-description-exxon-valdez-oil-spill 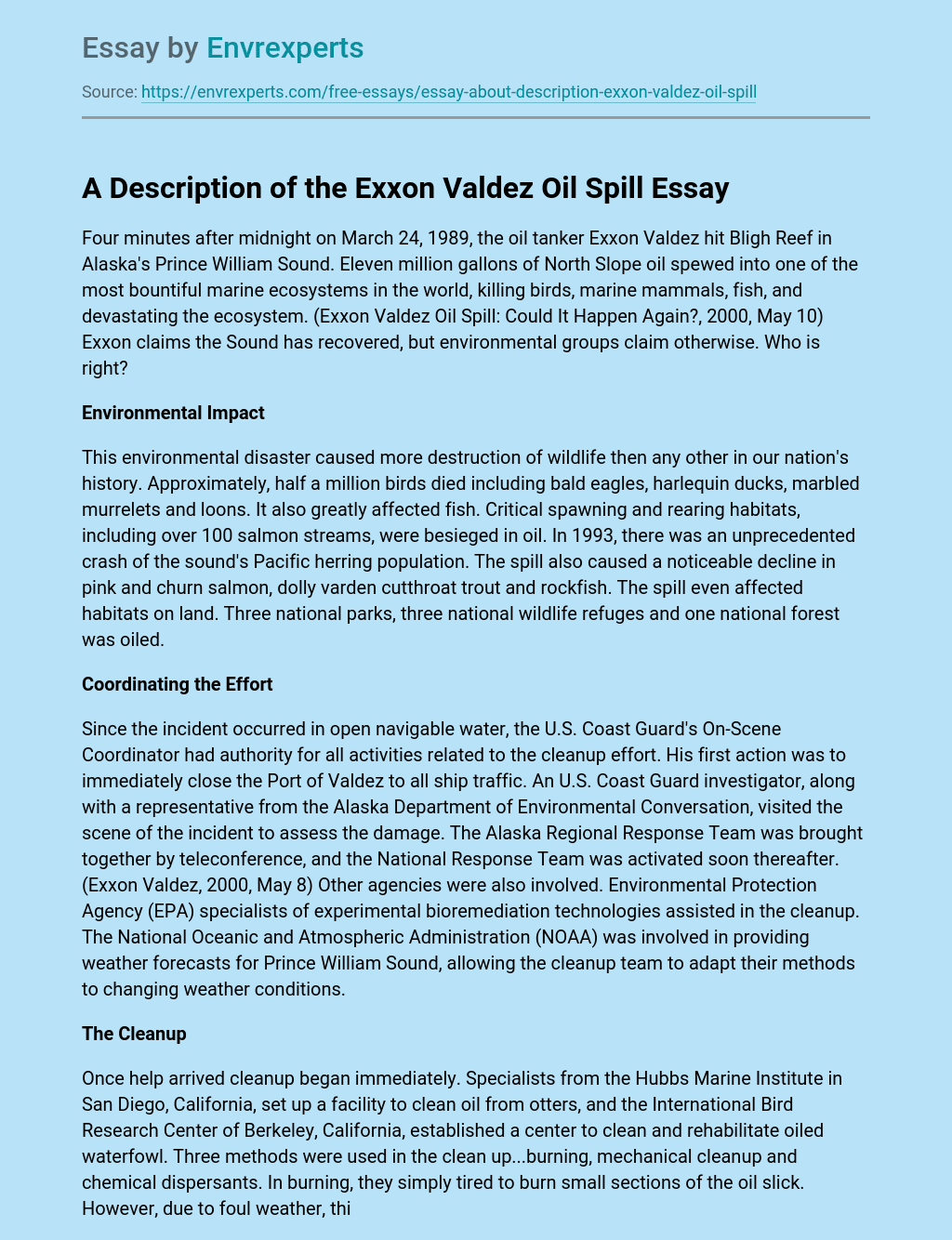