Description of Analyze Researches of the Land Use

Research study was conducted by Qiongfang et al., (2013) to simulate the effect of the land use change on water quantity in the upper Huaihe River basin in China. Study was done by soil and water assessment tool (SWAT) and land use map of catchment area of 10190 km2 within three-time phase 1980s, 1990s and 2000s and daily rainfall details from 1980 to 2008 were used. Evapotranspiration calculated by Penman Monteith method. Result indicated with in same condition of terrain slope, soil texture and rainfall, effect on the rainfall-runoff relationship and the runoff quantity had increased by the 1990s ,1980s and 2000s land use pattern and had decreased by farmland, woodland and paddy field.

Don’t waste time
Get a verified writer to help you with Description of Analyze Researches of the Land Use
Hire writer
$35.80 for a 2-page paper

Research study was conducted by Luis et al., (2016) to analyze the changes of the upper soil characteristics and its impact on the runoff. To obtain particular objective Combeima river catchment in South America was selected considering the time frame from 1991 to 2007 and TETIS distributed hydrological modeling software was used. The major parameters which were focused in the research was Hu (Static storage capacity) and Ks (Upper soil vertical saturated hydraulic conductivity).

Parameter estimation was done by TETIS and therefore different types of input maps were used such as the digital elevation model, soil types, land uses, geology and geological faults.

Moreover DEM (Digital elevation model) was obtained from shuttle radar topography mission of the NASA and DEM was used to generate slop maps, flow direction and overland hillside flow, network of drainage and cumulative cells. IGAC was used to generate land cove land use changes and geology and geological faults. The Evapotranspiration data and the soil properties of upper soil were gathered by previous researches and the soil properties were evaluated by Pedotransfer functions. Mainly there were four type of land use such as grassland, forests, crops and impervious surface. Results indicated when considering the time frame between 1971 to 2007 the annual maximum flows and quantiles of flood was sensible to changes and the intensity of the changes of the land cover and the flood it was found that flood risk was developed when the land cover changed from the forest to grassland.

Research was done by Temesgen et al., (2017) to determine the impact of on the hydrological process due to land use change in Andassa watershed in Ethiopia within 1985-2015 and predict the impact of the LULC changes in year 2045. Therefore, cellular Automata Markov (CA Markov) was used to give the prediction of LULC states in 2030 and 2045, Soil and Water Assessment Tool (SWAT) used as a modeling software and used hybrid land use classification technique for analyze landsat images 1985, 2000 and 2015). During the research in order to identify the impact of the LULC changes, the maps of LULC were used individually while the other SWAT model inputs were at constant and the impact of the each of the LULC types were analyze using the Partial Least Squares Regression (PLSR) model. By the results it was recognized that the increment of urbanized area and decrement of forest, grassland and shrubland during 1985-2015-time frame and were expected to continue in the 2045 and 2030. Research study showed when considering time period from 1985 to 2015, increment of the annual flow by 2.2%, wet seasonal flow by 4.6%, surface runoff by 9.3%, water yield by 2.4% and the decrements of dry season flow by 2.8%, lateral flow by 5.7%, ground water flow by 7.8% and Evapotranspiration by 0.3%.

Research was performed by Yuqin et al., (2019) based on Qinhuai river basin in China to determine predicted land use change in 2028 and then examine its effect on the runoff. Firstly, analyzation was carried out using CA Markov model between 2001 and 2010 and then projectile land use change was obtained for the time from 2010 to 2028. HEC-HMS model was used to examine the impact on the runoff. Result showed that, 1) from 2001 to 2010 the transition from paddy fields, forest land and dryland into urban land was increased by 56.81% and by CA Markov it was discovered that urban land and dry land were predicted to be increased by 17.47% and 14.05 in 2028. 2) By projected land use in 2028 it was found that the flood peak and flood volume of the small-scale flood intended to increase by 3.5% and 2.9% whilst decreased to 0.4% and 1.1% for a big scale flood. 3) Conceivably, if the distribution of urbanized land increase by 30% to 60% then the predicted increments of flood peak and flood volumes will be 4.7% to 8.1%.

Research study was done by Sajikumar et al., (2014) to investigate the effect of land use and land cover changes on runoff characteristics. Selected watersheds were Minali and Kurumali River in Kerala, India. Surveyed details were showed that the Minali River originated from Vaniampara hill and for the Kurumali River it was Chimmony, Poomali and both rivers are originated from Western Ghats. Catchments area of Minali and Kurumali was respectively 145 km2 and 322.5 km2 and main forest area located upper area of the watersheds and main vegetation type covered 60% by Peechi-Vazhani wildlife sanctuary, evergreen and semi evergreen and other 40% covered by moist deciduous and scrub sort of forest. The main occupation of the inhabitants who live in the area was agriculture such as vegetables, banana, rice, tapioca, cashew, rubber etc.

Also, people were depended mostly forest and it had resulted decrements of the forest area. Utilizing the ArcSWAT interface for SWAT in ArcGIS, hydrological modeling was done and several input data of the particular watersheds such as topography, land use, soil properties and weather data were used for the SWAT. SCS curve number method was used to evaluate surface runoff and Penman-Monteith method was used to estimate evapotranspiration. In the model setup they were used simulation time period from 2000 to 2005 and researchers were assumed that there was no runoff data for the calibration and existing runoff data were used for the validation and the parameters were not obtain by calibration process those were derived from the physical analysis and from the default values applicable in the model. Furthermore, available land use data was only found for the year 2004 but there were hydro meteorological data from year 2000 to 2005 and researcher were neglected this mismatch and they have mentioned their main purpose was to identify the effect of the LULC change rather than take an investigation for the historical runoff flows. When comparing the simulated runoff of in 1967 verses 2004 it was found peak values of runoff had increased rather than stream flow of smaller values and the increments of peak discharge volume were about 15% for both catchments. Also they were found at about 13% of decrements in ground water recharge in the catchment area.

Description of Analyze Researches of the Land Use. (2021, Oct 31). Retrieved from http://envrexperts.com/free-essays/essay-about-description-researches-analyze 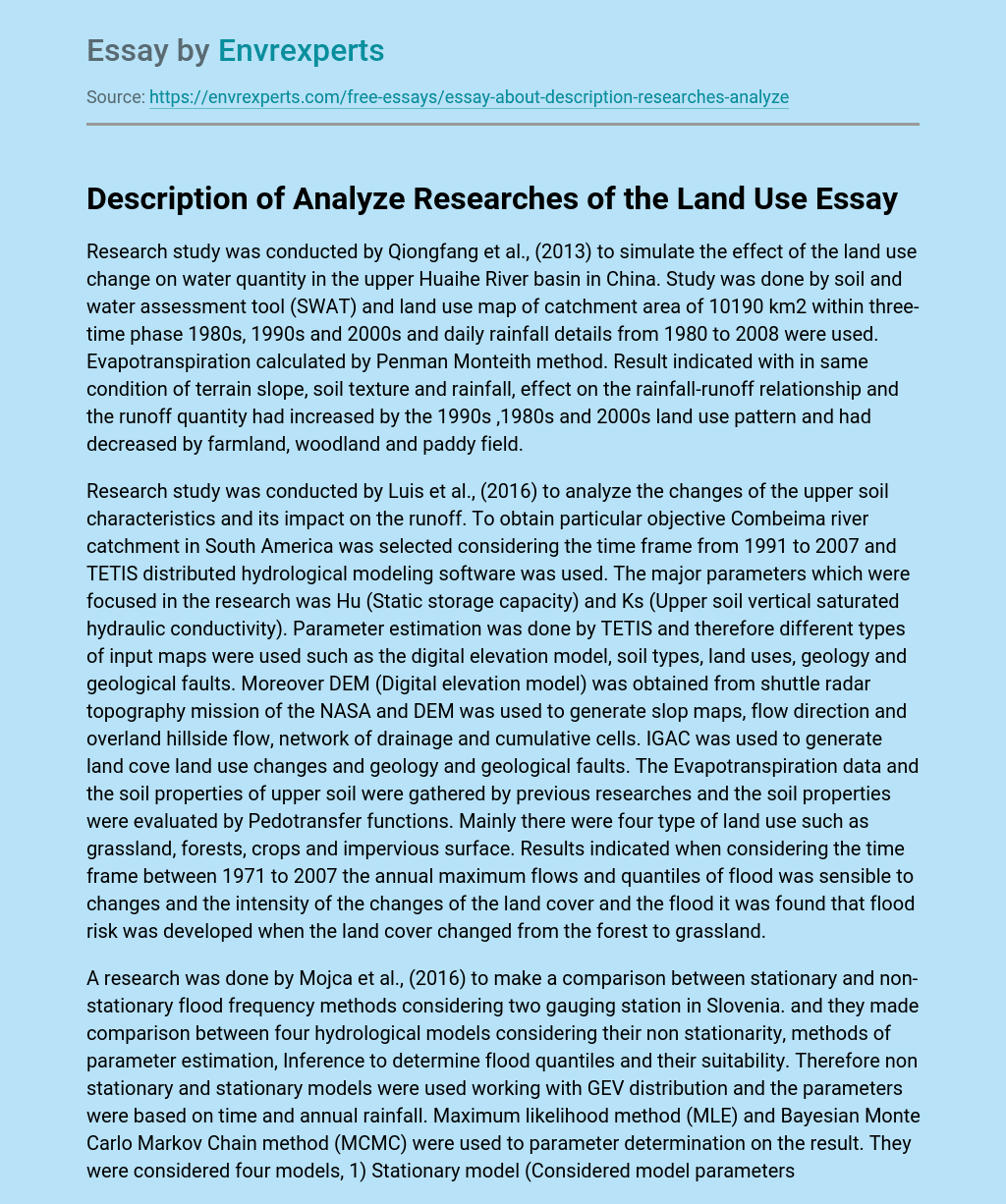