The Destruction of Coral Reefs, the Largest Biological Structures on Earth, and the Need to Protect Them

Coral reefs are arguably the world's most beautiful habitats. Coral reefs have been called the rainforests of the oceans, because of the rich diversity of life they support. Scientists have not yet finished counting the thousands of different species of plants and animals that use or live in the coral reef. There are three types of coral reefs: fringing reefs, barrier reefs, and atolls. Fringing reefs are located close to shore, separated from land by only shallow water. Barrier reefs lie farther offshore, separated from land by lagoons more than ten meters deep.

Don’t waste time
Get a verified writer to help you with The Destruction of Coral Reefs, the Largest Biological Structures on Earth, and the Need to Protect Them
Hire writer
$35.80 for a 2-page paper

Atolls, on the other hand, are formed far offshore and they make a ring shaped reef that close a circular lagoon. Coral reefs are the largest biological structures on the planet, with the largest being the Great Barrier Reef covering over 2000 kilometers along the east coast of Australia (Focus, 1995). The reef is said to be 500,000 to 2,500,000 years old and is said to be visible from the moon.

(Scientific, 1987). There is only one problem with this beautiful structure and that is the carelessness of man.

Silt from deforested lands and pollution from crowded coastlines choke them, and overuse by coal miners, fisheries, and even tourists deplete and destroy coral reefs. There are many more factors which add to the destruction of the coral reefs, which if not stopped it will destroy all coral reefs.

Corals are animals, not plants, sunlight is the key to their survival. They need it to power the millions of microscopic algae, called zooxanthellae, that live in their tissues.

The algae provides the corals with food and oxygen in return for raw materials and a secure place to live. This teamwork is what allows the reef to survive in nutrient-poor tropical seas. This relationship is sensitive to such changes in the environment as cloudy waters or extreme temperatures. The stress on the corals can cause them to expel their algae, a phenomenon known as bleaching (Futurists, 1993). With the algae gone, the coral skeleton is visible and eventually it dies. Died corals lead further on to the death of the reef.

There are four environmental factors that affect their growth: temperature, salinity, water depth, and wave action. These factors expose the reef to changes in the environment very easily especially since it is located so close to shore. This also makes it hard for all of the species which use the coral reef to survive. Coral reefs are home to perhaps one-fourth of all marine species. This in turns affects the entire ecosystem of the ocean. Pollution by humans have directly or indirectly caused the death of 5%-10% of the worlds living reefs, according to marine biologist Clive Wilkinson of the Australian Institute of Marine Science. This estimate didn't take in global warming and ozone depletion as a factor. The pollution is caused by fisheries, oil spills, deforestation, tourists, and even reckless divers. The problems which are getting even bigger is the problem of deforestation and reckless divers.

In the watershed of Bacuit Bay in the Philippines, deforestation increased erosion into the bay by more than 200 times. (Futurists, 1995) One of the biggest threats to coral reefs are tourists. Last year alone over 1.2 million tourists visited the Great Barrier Reef. (Star-Bulletin, 1995) The tourists are not only fisherman and devoted divers they are also scientists who wanted to see the enormous reef. Every year the numbers of visitors increase by 10%. It has brought many resorts to the area who also want to get into fun and making a little money in the $1 billion business. Even the hotels and the motels pollute the reefs by their drainage and sewage pipes. This is causing a huge problem in coastal tourism which is the world's fastest growing industry, worth over $7 billion annually in the Caribbean.(Star Bulletin, 1995) Marine Scientists are really worried of how much longer the reef can survive with all these visitors to the reefs.

Global warming and ozone depletion are major contributors to destruction of the earth's coral reefs. Global warming is said to cause the effect of bleaching, as mentioned earlier. This bleaching has just started in the islands of Hawaii. The temperature of the water in Hawaii has said to have rose over a two degrees in just one decade which the scientists think soon will show the effects in their reefs (Star-Bulletin, 1995). Another example during 1982-83 El Nino event, during which unusually warm water flowed from South Americas Pacific Coast, up to 70%-90% of the corals off the Pacific coasts of Costa Rica, Panama, and Columbia died. Also, coral mortality was more than 95% off Ecuador's Galapagos Islands (Futurists, 1993). Scientists have found that temperatures more than 4 degrees Celsius above normal, even for a few hours, will result in greater that 90% coral mortality.

The coral reefs can provide great things to mankind if they are taken from the corals with care and responsibility. Coral reefs yield approximately one-tenth of all fish caught for human consumption, or around 4 to 8 billion tons annually (Futurists, 1993). Healthy reefs are thought to be among the most productive fisheries in the ocean, 10 to 100 times higher per unit area that of the deep ocean (Scientific, 1987). If the fisheries are regulated than the reefs can be used as a food source without hurting the reefs or the ecosystem. For example, Pacific Islanders obtain up to 90% of their animal protein from reef fish without affecting the reefs and without depleting the fish and affecting the ecosystem (Star-Bulletin, 1995).

Surprisingly, some of the world's largest oil and gas fields are ancient reefs. Like the rain forests, the reefs also hold considerable untapped potential in the science of medicine. Japan's coast is one of the most studied coral coast in the world. In Japan's reefs there is a chemical called kainic acid, which is used as a diagnostic chemical to investigate Huntington's chorea, a rare but fatal disease of the nervous system (Focus, 1995). Coral also produces a natural sunscreen which is now being marketed to sell as a sunscreen to humans in America. Also, the porous limestone skeletons of coral is now being tested as bone grafts in humans(Focus, 1995). More promising testing is being done on other reef organisms to generate chemicals for cancer and AIDS research. If used properly, the reefs of the entire world can better serve humans with medicine rather than with food.

There have been many studies on how long the coral reefs will last, and they all agree that within fifty years, coral reefs existence will be cut in half. The studies also say that within one hundred years they could be completely destroyed. This should be a wakeup call to humans that we as a whole group have to do something about saving these coral reefs. If these reefs are destroyed it is thought that it might destroy the entire ecosystem of the ocean. There are over sixty-five countries that have designated some 300 parks that include coral reefs as natural habitats in the world (Futurists, 1993). The problem is that less that 30% of the designated areas are fully protected. The fight is economical not ecological. Such as Australia and the Caribbean who are making billions of dollars on their coral reefs. Everyone must work together to stop the pollution and the destruction of our coral reefs and our environment. It is not just one thing that is destroying the reefs; it is many factors together that are destroying it. Ultimately, it is as much a question of whether we save or destroy the planet as it is a question of whether we save or destroy the world's reef.

The Destruction of Coral Reefs, the Largest Biological Structures on Earth, and the Need to Protect Them. (2021, Oct 31). Retrieved from http://envrexperts.com/free-essays/essay-about-destruction-coral-reefs-largest-biological-structures-earth-and-need-protect-them 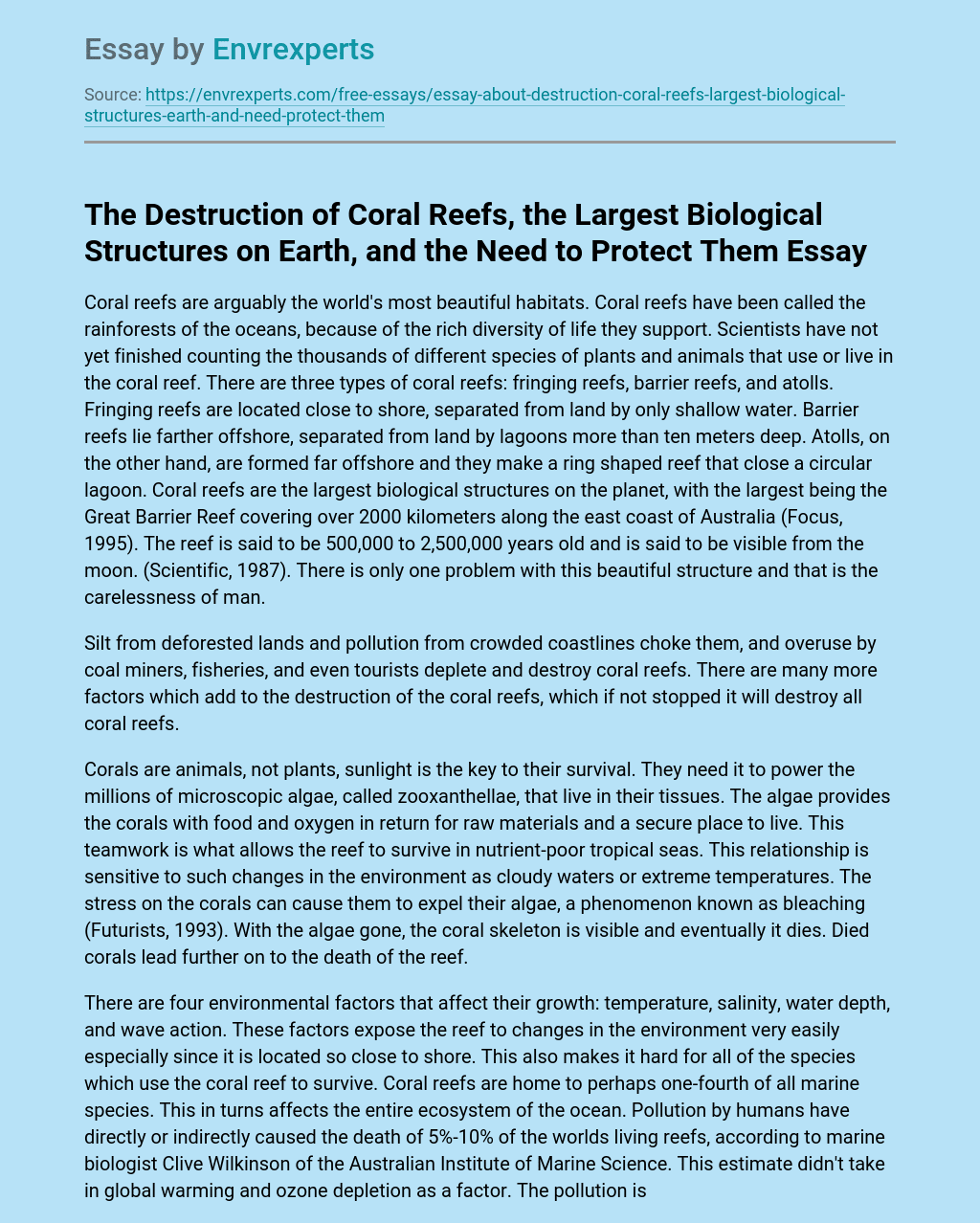