Difference between Theories of Development

Don’t waste time
Get a verified writer to help you with Difference between Theories of Development
Hire writer
$35.80 for a 2-page paper

Modernization refers to a model of a progressive transition from a 'pre-modern' or 'traditional' to a 'modern' society (Smith, 2010). The process of modernization is explained by the modernization theory of development and its subsidiary theories. Modernization theory was a “dominant paradigm in the social sciences in the 1950s and 1960s, and then went into a deep eclipse” (Rodney, 2006: 9). It made a comeback after 1991 but remains a controversial model.

Developments such as new data technology and the need to update traditional methods in transport, communication and production, it is argued, make modernization necessary or at least preferable to the status quo (Matunhu, 2011).
Among external influences, however, science is exceptional because it is considered beneficial to developing countries by way of ‘knowledge and technology transfer’ from developed countries (Ellis &amp; Biggs, 2001). In other words, societies can be fast-tracked to modernization by ‘importing’ Western technical capital, forms of organization, and science and technology to developing countries (Coetzee &amp; Wood, 2007). W.W. Rostow argues that adoption of scientific methods and scientific ways of thinking and acquisition of techno-scientific skills are critical at the ‘transition to takeoff’ stage of development (Smith, 2010). Essentially, proponents of modernization theory view science and technology as catalysts for development.
As far as modernization theory is concerned, development is simply a matter of knowledge and technology transfer that is unproblematic and straightforward, context free, and not disruptive of existing social and cultural arrangements in developing countries (Singh, 1999). Modernization theory also seems to be unmindful of the fact that much of the knowledge and technology critical for national development and national competitiveness are within the domain of proprietary knowledge production and this makes it a weak theory.
In a way, modernization theory implies a monolithic, one-way, and top-down development scheme that holds true for all identities, for all time, for all places, and for all contexts (Ellis &amp; Biggs, 2001). The same holds true for knowledge generation, production, dissemination, and representation. In this top-down development model, the sources of knowledge are foreign to the places and identities to which knowledge is applied or exported. As a model for social change and development, modernization theory fails to consider the possibility of having an interactive and multifarious process of knowledge generation and exchange (Rodney, 2006), which is made possible by recent advances in ICT.
Modernization theory explained the underdevelopment of countries in Asia, Africa and Latin America primarily in terms of cultural ‘barriers’ to development’, basically arguing that developing countries were underdeveloped because their traditional values held them back; other modernization theorists focused more on economic barriers to development (Rodney, 2006). In order to develop, less developed countries basically needed to adopt a similar path to development to the West. They needed to adopt Western cultural values and industrialize in order to promote economic growth. In order to do this they would need help from Western governments and companies, in the form of aid and investment. This aid and investment came with strings attached resulting in most African countries getting poorer than before.
Further, modernization theory favored a capitalist-industrial model of development under which they believed that capitalism encouraged efficient production through industrialization, the process of moving towards factory based production (Ellis &amp; Biggs, 2001). This idealistic conceptualization of development did not go well everywhere. Firstly, there are no examples of countries that have followed a Modernization Theory approach to development. No countries have followed Rostow’s “5 stages of growth” in their entirety. This shows that modernization theory is not practical and does not apply to the modern societies.
Secondly, Modernization Theory assumes that western civilization is technically and morally superior to traditional societies (Singh, 1999). This implies that traditional values in the developing world have little value compared to those of the West. Many developed countries have huge inequalities and the greater the level of inequality the greater the degree of other problems: High crime rates, suicide rates, poor health problems such as cancer and drug abuse. This shows that the dependency of modernization theory in using western countries as a parameter to development is a demerit.
Thirdly, Dependency Theorists argue that development is not really about helping the developing world at all. It is really about changing societies just enough so they are easier to exploit, making western companies and countries richer, opening them up to exploit cheap natural resources and cheap labor. Modernization theory truly created dependency of ‘developing countries’ to western countries. For this reason, Coetzee &amp; Wood (2007), notes that the modernization theory was introduced to exploit African countries which were rich in natural resources.
Fourth, Neo-Liberalism is critical of the extent to which Modernization theory stresses the importance of foreign aid, but corruption often prevents aid from getting to where it is supposed to be going (Matunhu, 2011). Much aid is siphoned off by corrupt elites and government officials rather than getting to the projects it was earmarked for. This means that aid creates more inequality and enables elites to maintain power. For example, in Zambia, it was recently discovered that one of the politicians had built 48 posh houses using proceeds of corruption.
Fifth, Post-Development thinkers argue that the model is flawed for assuming that countries need the help of outside forces. The central role is on experts and money coming in from the outside, parachuted in, and this downgrades the role of local knowledge and initiatives. This approach can be seen as demeaning and dehumanizing for local populations. Smith (2010) argues that minds become colonized with the idea that they are dependent on outside forces. They train you to be paralyzed and then sell you crutches. There are alternative models of development that have raised living standards: Such as Communist Cuba and The Theocracies of the Middle East.

In conclusion, modernization theory has brought misery than the promised benefits to its use. Many countries especially those in sub-Saharan Africa are still facing the negative of applying the theory at national level. The merits of modernization theory are outweighed by the demerits thereby, making theory inapplicable to today’s society.

Difference between Theories of Development. (2021, Oct 31). Retrieved from http://envrexperts.com/free-essays/essay-about-difference-between-theories-development 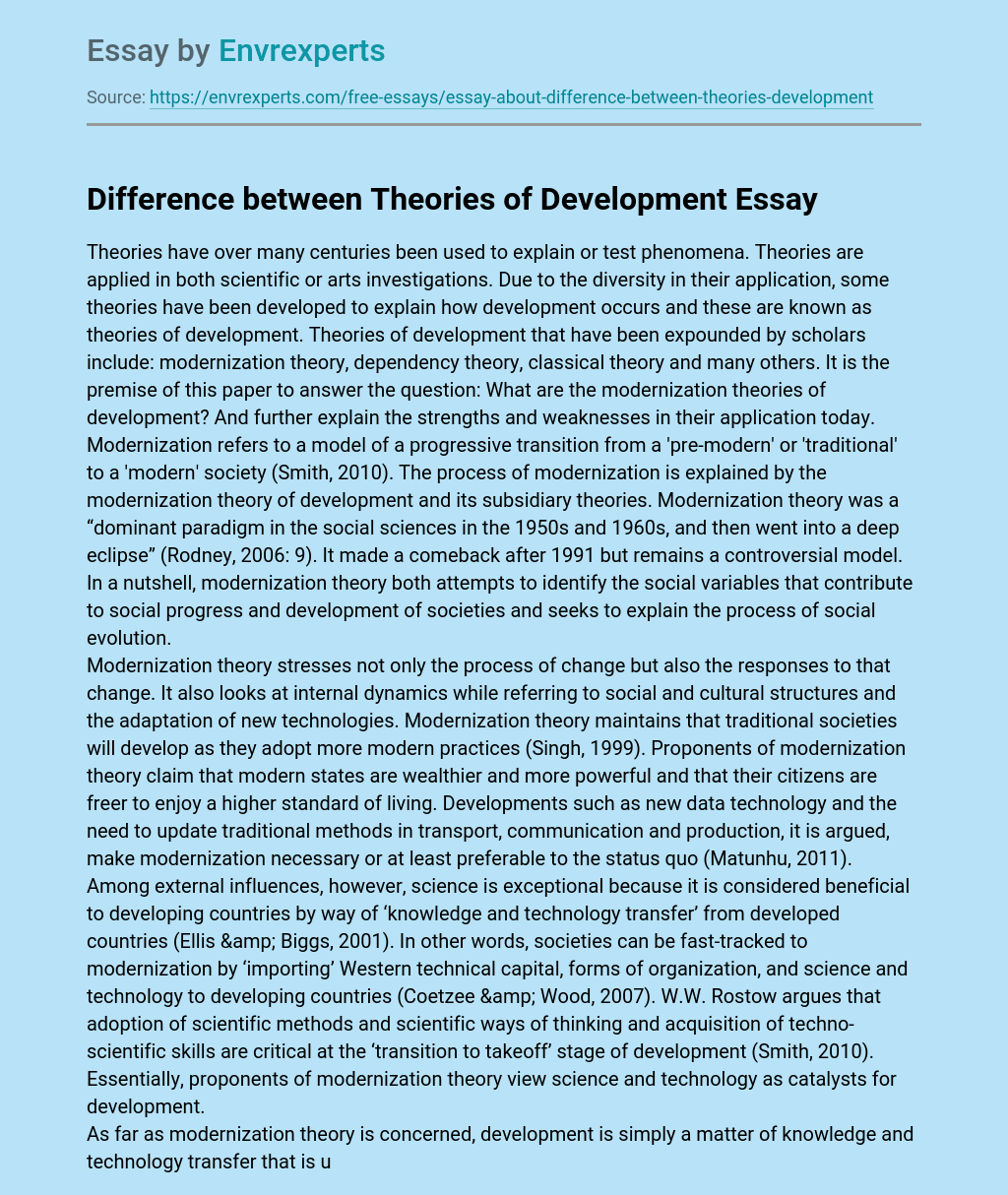