Different Causes of Deforestation and Measures to Deal with the Problem

The Rainforests are being destroyed, daily at alarming rates. The deforestation is caused by three main factors: Commercial Logging, Non-commercial Farming Operations and Commercial Agricultural Development, there are also many minor factors, but the biggest of these is Cocaine production.
Many sources pinpoint commercial logging as the primary culprit in tropical rainforest destruction. Logging damages the rainforest directly through the removal of commercially valuable timber species such as mahogany, rosewood, meranti, kapok and teak. Indirect damage occurs in several ways.

Don’t waste time
Get a verified writer to help you with Different Causes of Deforestation and Measures to Deal with the Problem
Hire writer
$35.80 for a 2-page paper

As the desired trees fall, they pull down surrounding lianas and epiphytic growth (vines); a single tree and its epiphytes may harbor as many ant species as the British Isles. Injury to nearby trees also occurs. The World Wildlife Fund estimates that for every tree intently cut down, another 50 are fatally damaged. Another major indirect effect of logging is the increased access to the forest that logging roads provide for people. Influx of landless farmers then results in more forest degradation due to their shifting agricultural efforts.

Non-Commercial farming operations are the another cause for deforestation. These exist in two forms. One called slash and burn agriculture, which occurs when people cut, burn, and farm a small patch of forest. Generally, the farming is successful for two or three years. Then, if the farm is on nutrient poor soil, the area must be abandoned and process repeated in another area of forest. Originally, many indigenous rainforest tribes in various regions of the world practice slash and burn agriculture without long-term damage to the forest; their numbers were small and this allowed for long fallow periods.

In the farmed areas during which the forest would recover. However, as populations have increased in the tropics, more areas are farmed and these areas are not allowed sufficient fallow time to regenerate. A second type of subsistence agriculture is what the Rainforest Information Center identifies as farming by shifted cultivators. In fact, the RIC suggests that over half of tropical rainforest loss is due to shifted cultivators. These are farmers who have been forced (shifted) off of their own land by the forces of development (such as mining or large scale ranching). Their only alternative for survival is to develop a small farmstead by cutting and burning the rainforest.

Commercial Agricultural Development is the third major cause of deforestation. This type of agricultural is usually based on large land holdings by a few individuals or by the government. Cattle ranching, to produce cheaper beef for developed nations is often cited as a prime example of how this type of agriculture harms tropical rainforests. In literature provided at the 1998 International Educator's Rainforest Workshop in Peru, the demand for beef was said to have accounted for 72% of the deforestation in Brazil in the 1970's. Incidentally, many rainforest activists have pointed out that much of the beef raised on these ranches makes it way into American fast-food hamburgers, a cause for consumer introspection on our part. Costa Rica has in many respects done an admirable job of rainforest remains but how much of it has been converted to pasture land. In Peninsular Malaysia, extensive areas of lowland rainforest have been transformed to rubber and oil palm plantations.

The manufacturing of illegal drugs would probably be the last thing most of us would associate with the rainforest destruction. Information relating to this problem was also presented at the International Educator's Rainforest Workshop. In Peru, nearly 2 million acres of rainforest (10% of the total destruction) have been lost to make room for the coca plants from which cocaine is produced. In Columbia, the income from cocaine production outpaces that provided by coffee exports. An offshoot of this problem is water pollution caused by the dumping of caustic chemicals used in drug productions into streams.
These are certainly not the only factors involved in tropical rainforest destruction. Other important causes are demand for fuel wood (cooking and charcoal production), colonization projects which involve moving people from overcrowded cities into forest areas, mining projects (such as hydraulic gold mining in Amozonia), and oil exploration and development. Destruction is not done for fun, it has a purpose; however there are other ways to use the rainforest, without causing damage, to receive the results desired.

Different Causes of Deforestation and Measures to Deal with the Problem. (2021, Oct 31). Retrieved from http://envrexperts.com/free-essays/essay-about-different-causes-deforestation-and-measures-deal-problem 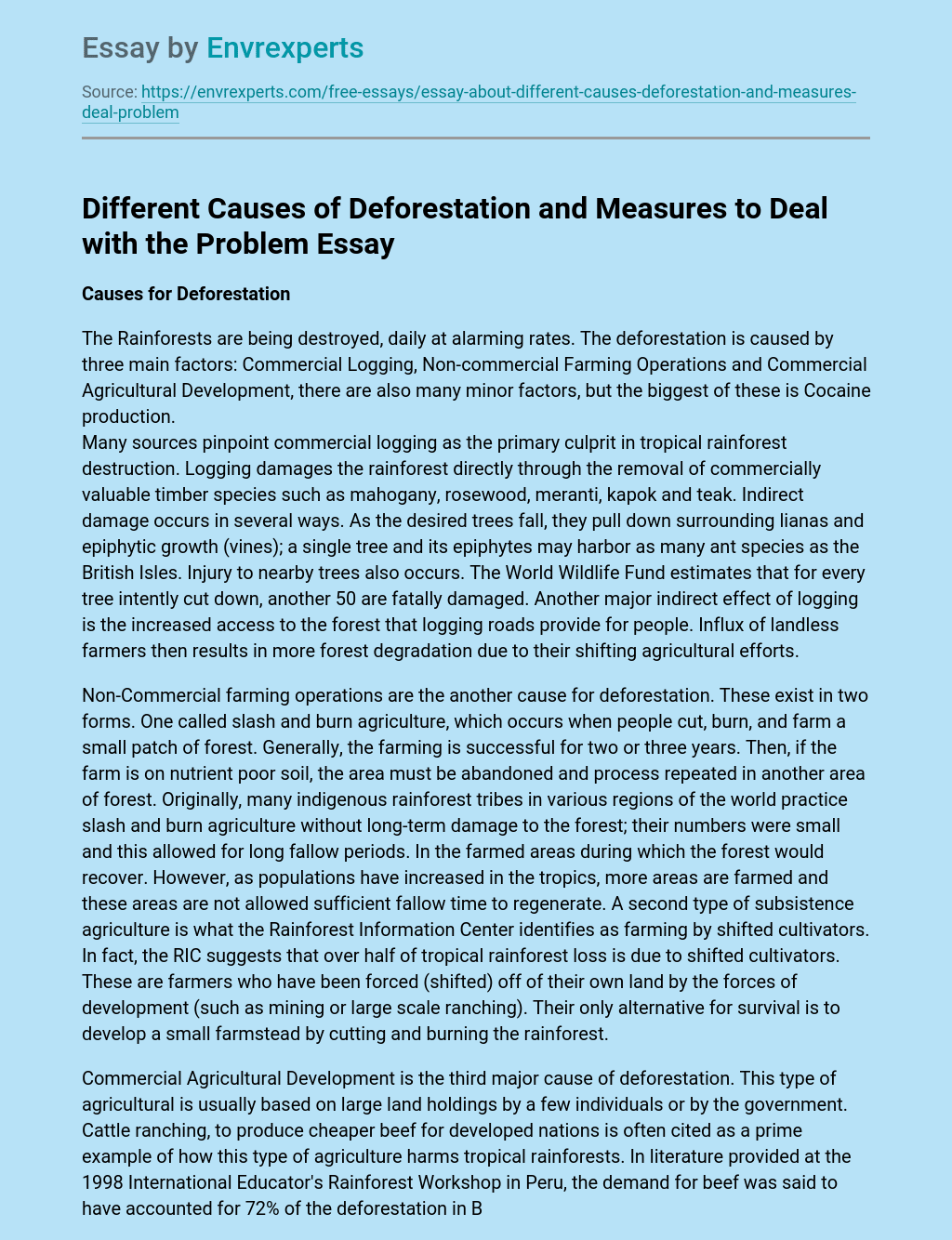