By land use analyzation one of the major finding was in the Manali and Kurumali catchment there were 60% and 32% change in forest area respectively. Mostly these changed area had substituted into agricultural land mainly for Rubber cultivation. By further investigation it was established due to the higher evapotranspiration of the Rubber led to reduction of percolation and subsequent reduction in the ground flow component but due to the plantation method of the particular area had led to increment in percolation. It was decided because of this two-sided process had led to make lower correlation between land use change and runoff characteristics.

Don’t waste time
Get a verified writer to help you with Different Methods Usage in Land Analyzation
Hire writer
$35.80 for a 2-page paper

Earlier method to evaluate time varying parameters was taking observation data of single basin and input those into a hydrological model.

But that method had limitation to identify catchment properties and climatic factors which are dependent on time and the method was not worked on hydrological prediction which are considered outside the calibration time frame. In this paper they used one of the Bayesian inference method, the hierarchical Bayesian (HB) framework were identified as a suitable method to reduce uncertainty in parameter estimation by utilizing several levels of details to constrain the time dependent parameters. But using HB method was questionable for compute the function of time dependent parameters for researcher because Bayesian method based on the parameter regionalization which means transferring calibrated parameters from one basin to another basin which has similar physical properties and spatial proximity.

Hence it was proposed HB method considering correlation in the properties of adjacent basins to reduce uncertainty of time varying parameter of a lumped hydrological model. Then they were tested proposed method.

To evaluate developed HB method, they were used two steps, hydrological model and pooling estimation method. GR4J, one of the lumped conceptual rainfall-runoff models was used as a hydrological model reason behind the selection was this model was detected as high-performance model in simulating both high and low flows and furthermore it had used in wide range of hydro climatic condition. Thereafter two-level HB frameworks were carried out first one was process layer, temporal variation of model parameters using regression function. Second one was prior layer, spatial coherence of the regression parameters using regression function. Then proposed method was applied on four nearby catchments in USA. Results showed proposed method was suitable for reduce uncertainty of time dependent parameters and it had enhanced prediction performance of the model by 9%.

Proloy et al., (2019) were done analyzation to study endogenous and exogenous mechanism of catchment and to determine its impact on rainfall-runoff relationship utilizing two catchment areas in southeast Australia. Those areas were Brankeet Creek and Victoria-Muttama Creek. These two catchments had:

After calculating essential parameters, they were performed drought data analyzation to ensure selected draught data is sufficient long and severe and they only considered drought data of more than 7 years and lower than 7% of mean dry period anomaly. Result showed Moreover, utilizing one-way analysis of variance (ANOVA) non-stationarity of Rainfall-Runoff relationship was identified. Then, mechanism of endogenous and exogenous was identified and their effect on the r-r relationship. Result showed that the endogenous mechanism such as ground water table, baseflow and vegetation have major impact on the r-r relationship rather than exogenous mechanisms potential evapotranspiration and temperature.

Research study was done by Dammalage et al., (2019) to analyze the impact on urban flooding by land use change. Selected area was Colombo district in Sri Lanka and selected watershed was Kelani river and it is most industrialized city in the Sri Lanka with area of 699 km2. According to research study, riverine and urban flood are most frequent types of flood in Sri Lankan urban and suburban area and the two-case study was taken, among those the flood and land use situation in 1989 was taken to investigate how land use change impact on flood disaster which had occurred in 16th of May 2016. To obtained main objective satellite remote sensing image processing algorithms and geographical information system were used. Firstly, three indexes were used to analyze the classes of Kelani river watershed.

It was decided to take rainfall details of Kelani river watershed in 1989 and 2016, because river flows through the Colombo district and also the outlet is located near Colombo city. By the Rainfall analyzation using Thiessen polygon, it was detected among three rainfall station (Nagalagam, Angoda, Hanwella) which were located within Colombo district, only Angoda rainfall station had showed significant increment. But there had been significant difference in Laxapana and Norton station. Furthermore, total rainfall of the year 1989 and 2016 were 1.4 Gm3 and 1.3 Gm3 but flood area of these scenarios was 63km2 and 75km2. As a result of rainfall analyzation, it was confirmed rainfall in Kelani watershed affected on the flood in Colombo district and also rainfall was not only the reason for the flood scenario in 2016.

Hence, Land use analyzation was done. Medium resolution Landsat data were taken in 1989 and 2016 to analyze land use change, therefore post classification change analyzation techniques were used. By using ENVI software thematic details of two classified images were taken, then land use change map of Colombo district was obtained by ArcGIS environment. According to land use map it was detected when comparing 1989 and 2016 a) urban had increased by 26% b) Agricultural areas had reduced from 41% to 39%. C) Green areas reduced from 11% to 7% d) Low settlement areas decreased by 20%. Also the land use map of the Kelani watershed from 1989 to 2016 was generated.

Moreover, divided watershed sections were obtained by considering flood areas, section 1 includes Colombo district with Colombo city, section 02 was suburbs area (rapidly urbanizing area), section 03 was tail of Colombo district. It was identified by considering section 01, the changed land use area was 44.2 km2 and increased flood area was 3.3 km2 and reason behind the small increasement of flood area comparatively to land use changed was after 1989 a canal was constructed to reduce flood around the pink colored area. In the section 02 has showed highest land use changed as 68.2 km2 area transition in to urban lands and other areas. Also, the flood area has increased by 8.1 km2 in section 02. Kaduwela area and the part of the Homagama DS includes in section 2 and it was detected 47.3km2 area has urbanized while agricultural, green areas reduced by 20.9 km2 from 1989 to 2016. Significant fact which was identified in this Kaduwela area was during flood occurred in 1989 and 2016 water level recording were 6.24m and 6.17m, even though water level of 2016 was larger than 1989 flood area had increased from 17.5 km2 to 25.6 km2. By considering all the factors it had proved land use changes induce significant impact on the flood.

Research was done by Jie et al., (2015) to investigate the evaluation of anthropogenic impact on the flood risk by considering three anthropogenic variation which were land subsidence, urbanization and flood defense. The main objectives were:

Research were carried on Shanghai coastal mega city located in the frontal alluvial plain of the Yangtze River delta and the total area was 6340 km2. From 1979 to 2009 in Shanghai metropolitan area has recognized as fast anthropogenic progression area and the population of the area has increased from 11.37 million to 19.21 also the GDP increased from RMB 28.64 billion yuan to 1504.65 billion yuan over the same time period furthermore by monitored data, downstream city center adjacent to Huangpu river had recognized as hotspot area of land subsidence with maximum rate of 24.12 mm/a. As a flood defense system, flood walls and sluices has created 480 km along the Huangpu River. Landsat images of year1979, 1990, 2000 and 2009 were collected and using Maximum Likelihood method those were classified into urban area, farmland, green space, bare land and water bodies.

The quantification of land subsidence and distributed land subsidence rate were carried out by utilizing monitoring records which had provided by Shanghai institute of Geological survey and Shanghai geological environmental bulletin for the time period of 1980-1990, 1990-2000 and 2000-2009. 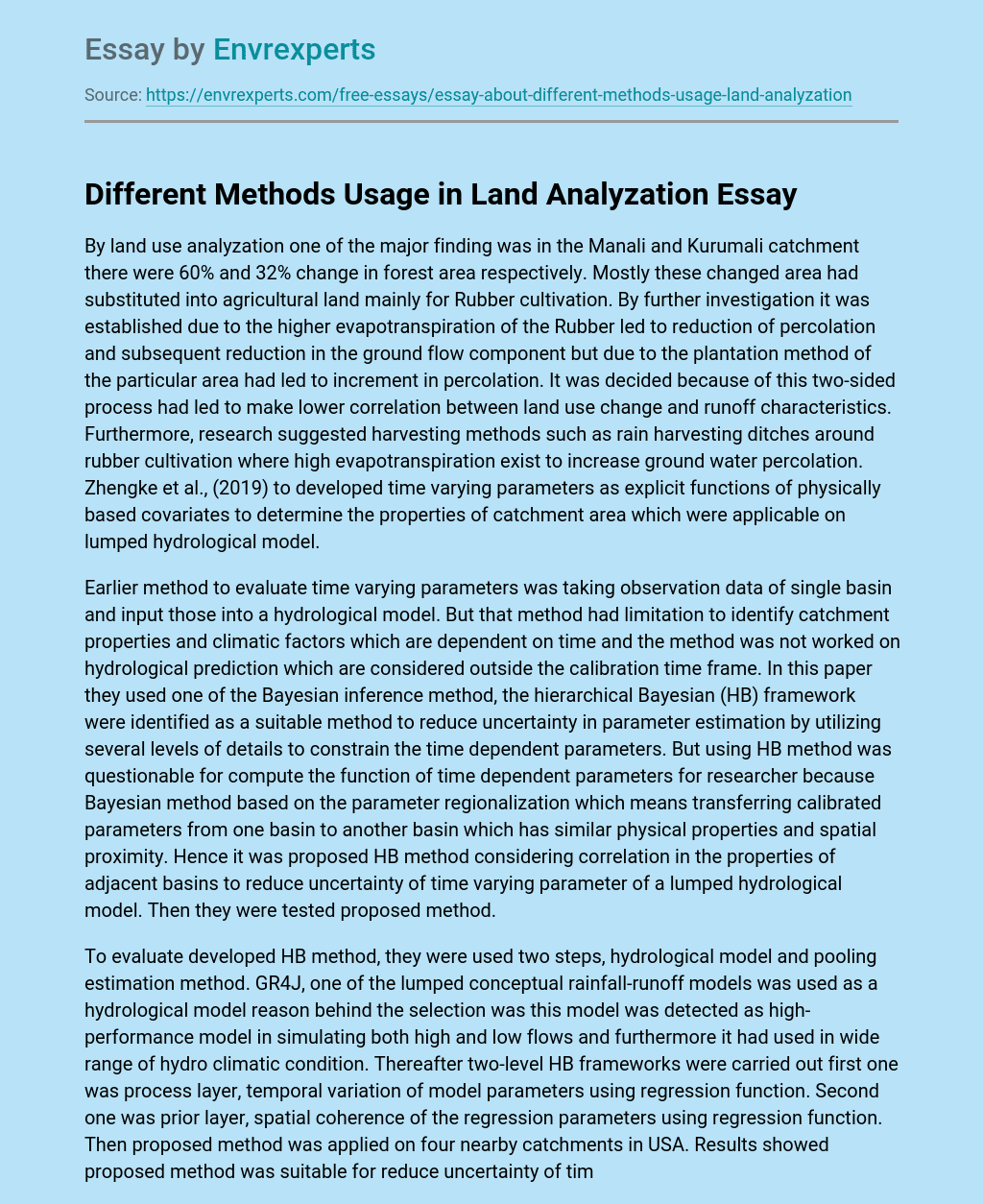