Recently, as we all aware, pollution has become a huge issue for any country. The disturbing term “Pollution” is defined as presence of a substance that harmful of has poisonous effect on the environment. Pollution is the major reason for environmental changes. Unfortunately, it is leading to excess of problems and opposing changes in our environment and wellness of our people.
Different form of pollutants in our surrounding is the major cause of pollution. As a result, our lifestyle is at risk.

Don’t waste time
Get a verified writer to help you with Different types of pollution
Hire writer
$35.80 for a 2-page paper

The essential elements of the pollution are different forms of waste materials. When our ecosystem is disturbed by the pollution, it loses its subsequently and it brings us numerous illnesses and ultimately global warming too.
There are mainly two major source of pollution. They are point source and no point source. Non-point source is indeed challenging to control it. In addition, there are many forms of pollutions such as air, water, soil, noise, light etc.
Present transportations use diesel and petrol which emit smoke and also the smoke that is emitted by cooking coal also pollutes our environment.

The numerous growth in the number of vehicles on the roads has only aided the emission of smoke, that eventually mixes with the air that we breathe when released. Likewise, water transportations like boats and speed launches create extensive damage to oceanic creatures and our beautiful environment. The smoke of these various vehicles is quite harmful and is the primary cause of air pollution. There is also the risk of sounds from these vehicles producing noise pollution.

Also the oil released by the sea transport into the sea causes water pollution.
Industries from all around the world even though they have brought wealth and prosperity, have continually disturbed ecological balances and have probed the biosphere. The fall-outs of experiments, pall of smoke, industrial effluents and the swirling gases are a constant hazard to health, contaminating and polluting both water and air. The inappropriate disposal of industrial wastes has become a source of both water and soil pollution. The chemical wastes from the various industries can cause pollution to rivers, lakes, seas and also to soil and air through the release of fumes.
The rapid population increase especially in developing nations, the demand for occupation, basic food and shelter has been on the rise. Due to the high demand, deforestation has become rampant to help meet the growing demand of the population.
Pesticides and fertilizers that are used during agriculture are major sources of environmental pollution.

This is probably the most dangerous and common form of environmental pollution and it has been seen to be identical with urbanization. The primary reason for this is the high rate of fuel combustion. Fuel combustion is now a very basic requirement for transport, cooking and some other activities both domestically and industrially. All these activities release a large number of toxic chemicals into the atmosphere and are not removed from the air, affecting and threatening our existence.
Sulphur oxide is released into the air by the smoke and this makes the air very toxic. This is primary caused by smoke from factory stacks, chimneys, vehicles or even something very common like the burning of a log of wood. The emission of Sulphur dioxide and many other gases into the atmosphere leads to global warming with the capacity to lead to an acid rain. The emission of these greenhouse gases and the global warming it causes has led to lacks, erratic rains and increased temperatures worldwide. Conditions and ailments like Bronchitis, Asthma and the extremely dangerous case of lung cancer and this occurs majorly in the cities.
One of the many sad examples of the calamities that about 2,000 people lost their lives in the tragedy and more than 200,000 people suffered from extensive respiratory problems every year. Respiratory illnesses, increase in asthma and cardiovascular diseases can be caused by an irritant.
Water is essential for life; every living creature or being depends on water for survival. About 60% of all species live in water; this means that the pollution of water is the most important pollution type that has to be controlled. There are a lot of factors that contribute to water pollution, one very major contributing factor is industrial effluent disposed into rivers and seas and causing a large imbalance in the properties of water and this makes the bodies of water unfit for live. There are also a lot of diseases that are caused by water pollution and these diseases affect both non-aquatic and aquatic species.
Pesticides and insecticides that are sprayed on different plants is a source of pollution to the groundwater and also, oil spills in oceans have led to severe irreversible damage to the bodies of water. Another source of water pollution is eutrophication and it happens due to activities like the washing of utensils, clothes near rivers, ponds or lakes; the washing detergent moves into the water and inadvertently blocks the penetration of sunlight and this reduces the oxygen content of the water and makes it inhabitable.
The pollution of water can have devastating effect on marine life. Citing an example, pathogens grow well with sewage, while inorganic and organic compounds that are in water can make the composition of water to change. If the level of dissolved oxygen is low, the water is considered to be polluted. dissolved oxygen is from the decomposition carried out on organic materials like sewage that are added to the water. By harming aquatic creatures, water pollution contaminates the whole food chain by seriously causing harm to the humans that are dependent on the aquatic creatures. There has been a sharp increase in the number of diarrhea and cholera cases everywhere.
Soil pollution is also called land pollution and it happens due to addition of chemicals that are not wanted to the soil caused by human activities. The use of pesticides and insecticides removes all the compounds of nitrogen from the soil thus making it highly unfit for the plants to get nutrients from. Deforestation, mining and waste release from industries also depletes the soil and this will inhibit the growth of plants and the soil will end up being eroded.
This is caused anytime there is a noise that has intensity higher than 85db and it reaches the bare ears. Noise pollution causes different psychological problems (e.g. hypertension and stress). It sometimes also causes a permanent impairment of hearing which is a very devastating thing. Noise pollution is largely caused by loud compressors and pumps in industries.
These are the forms of energy which are being used blindly without thinking the after effects of these. They come back and harm us and our families but we still fail to realize the cause. Hence, if we start using the energy sources in a limited amount, we might not have to wait for the nation to take any measures at all to solve the issue. To conclude, everyone should have to take responsibilities on own to protect environment nearby and Governments also should be strict for their laws and natural issues. All in all, since our survival depends on the environment we cannot ignore environmental problems on the pretext that they are a byproduct of development. Of course, there is a need for development but it is time we said no to development that destroys the planet. 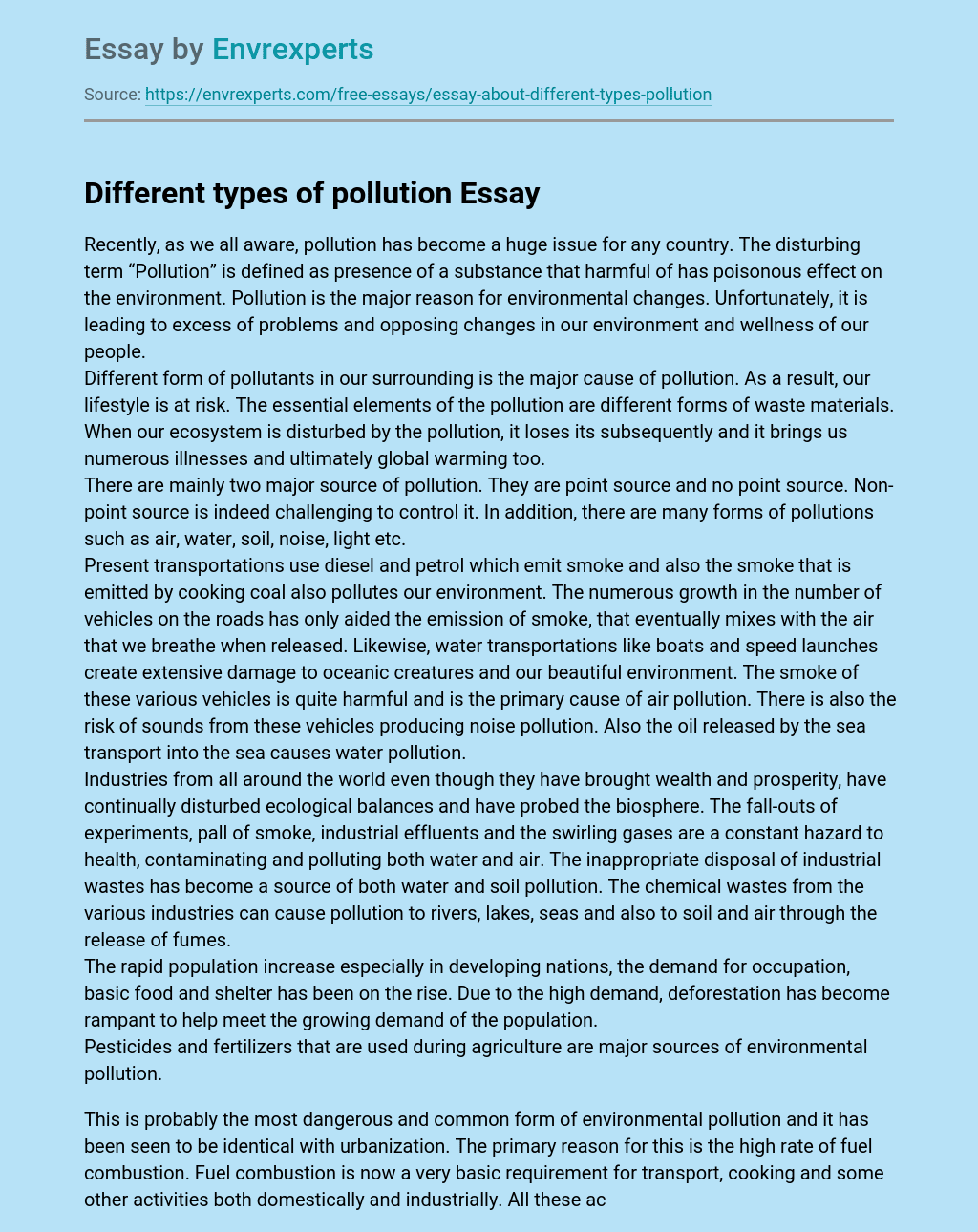