The Different Types of Vegetation and Its Significance to the Environment

Identification of the Types of Natural Vegetation

Vegetation is a key component of an ecosystem; thus, it is involved in the control of various biogeochemical cycles such as water, nitrogen, and carbon. Vegetation playing an important role to the environment is classified as natural and planted vegetation. Vegetation types are determined by the type of soil, land formation, and the climate of the area in which the vegetation grows. For instance, more rainfall supports the growth of taller plants and those of greater variety.

Don’t waste time
Get a verified writer to help you with The Different Types of Vegetation and Its Significance to the Environment
Hire writer
$35.80 for a 2-page paper

For instance, rainfall in Australia restricts the forests to margins as the country receives highest rainfall. Vegetation, which further affects the ecosystem, is also regulated by the surrounding temperature. Tropical rainforests are known to be found in areas experiencing high temperatures and high rainfall. Such types of vegetation are mostly found in the Northern Australia because of their proximity to the Equator. More research may be needed to bring out clear information on how temperature affects vegetation type (Beard &Stewart, 1949).

In the classification of vegetation, there are various vegetation zones that divide plantations according to the variation of precipitation and temperature. The United States is known to have 10 vegetation zones, ranging from the warmest to the coldest zone. The zones also range from areas that receive frequent rainfall to those that are often dry. There are various categories of forests that influence the surrounding environment as the forests provide a natural habitat to most of the animals and some plants (Beard &Stewart, 1949).

Forests are either deciduous or evergreen.

There are also coniferous forests that have cones and needles in the place of normal leaves. Evergreen forests stay green all year long. They are found in places such as North America and Canada, in the province of British Columbia. Deciduous trees shed their leaves to match the climatic conditions and to save on the little natural resources that they acquire from the environment.

Grasslands consist of flat and open areas where grasses are the dominant vegetation. An example of such vegetation is in the continent of Antarctica. Just as it is the case in the forest vegetation, climate also plays a major role in the distribution of grasslands. Tropical grasslands are known as savannas, doing great in warm weathers of Africa. Serengeti plains in Tanzania are an example of such grasslands. Other areas have Tundra vegetation that do not grow much because of cold environments and short rainy seasons. Desert vegetations are adapted to thrive in areas with no precipitation and with very high temperatures (Beard &Stewart, 1949).

Alongside being food and shelter to many wild animals, natural vegetation provides natural cooling and soil stabilization. The heat from the sun is blocked from reaching the ground by the leaves, which sometimes form a canopy. The water that evaporates from the leaves through precipitation is also vital in enhancing the cooling of the surrounding environment. The natural vegetation, therefore, have balanced humidity and stable soils as soil erosion is also minimized (De Laubenfels, 1975).

Importance of Natural Vegetation and Natural Resources to People

Natural vegetation and resources are important to human beings for the purpose of housing and development of infrastructure. Most of the construction objects in the major cities and town are derived from natural vegetations such as forests. Other natural resources such as stones and metals are used for development functions. Human beings consume the resources from the environment on a daily basis as they are also important in mobility. Various vessels are made from natural resources together with the fuel that they consume when transporting raw materials (Franklin, Jerry &Blinn, 1988).

Natural vegetation is habitats for biodiversity as well as livelihood for humans. They provide agricultural products such as food and drink that release energy to people who have to work in order to earn living. Medicinal substances and household items such as plates and mugs are also found from natural vegetation and resources. In the developed world where air pollution has become part of the daily life, natural vegetation such as forests clean up dirty air; hence, reducing air pollution in busy town and cities. The vegetation cleans up the air on a large scale by absorbing carbon dioxide and other air pollutants such as sulfur dioxide (Rouse et al, 1974).

Natural vegetation is significant in the fight against flooding as tree roots are beneficial in heavy rains, more so in low lying areas that are prone to flooding. Flooding is a disaster that if not well managed, can lead to loss of lives and the destruction of property and degradation of natural environment. Classifying natural vegetation and realizing the benefits that comes with them is important in learning more about the ecosystem and the distribution of natural resources.

The Different Types of Vegetation and Its Significance to the Environment. (2021, Oct 31). Retrieved from http://envrexperts.com/free-essays/essay-about-different-types-vegetation-and-its-significance-environment 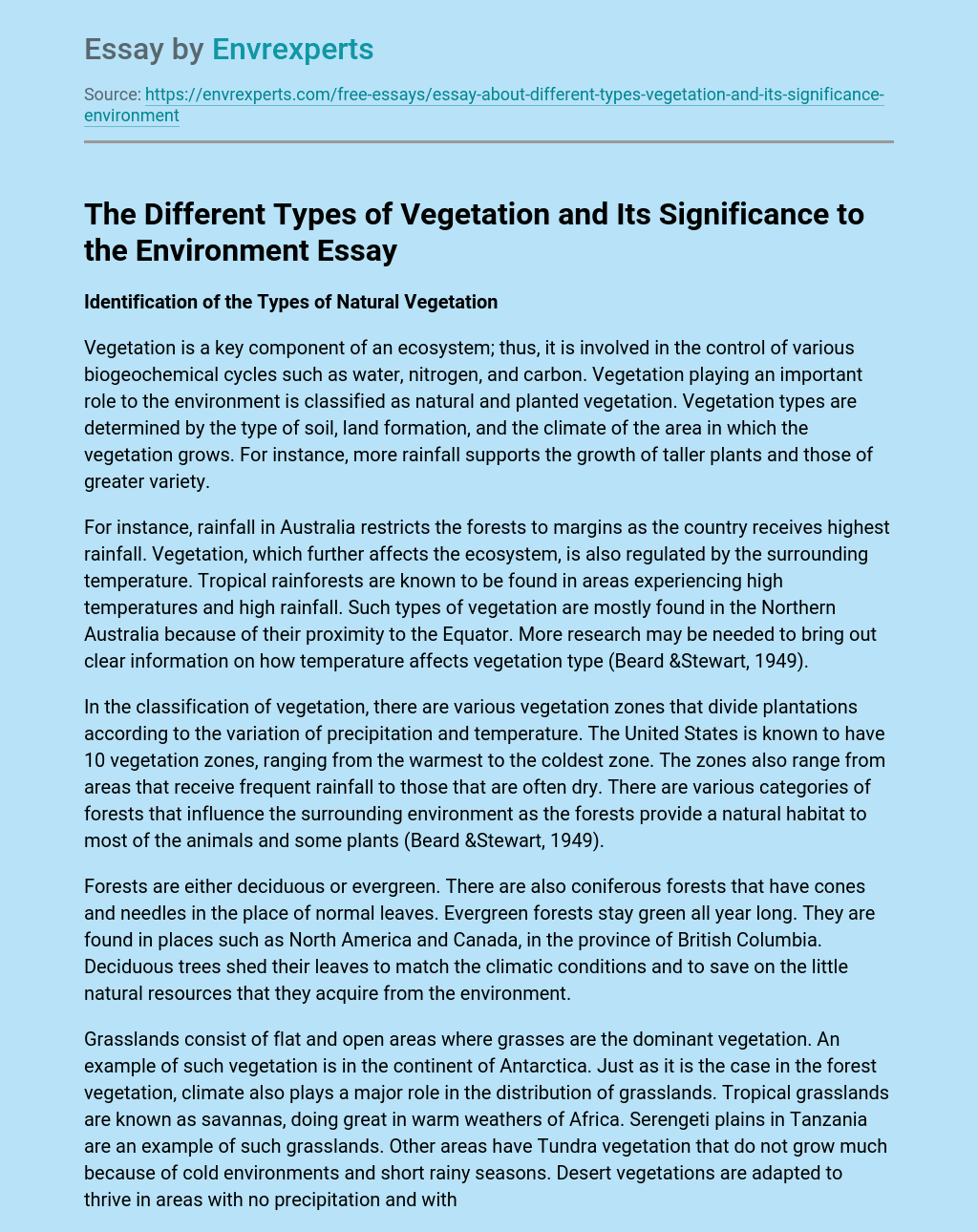