Biology major from the University of Guelph and science teacher, Gregory Brown in his YouTube video, “How To Talk To Climate Change Deniers,” gives facts and tips about the history of climate change denial and how to use conversation skills to openly discuss the topic of climate change. He supports his claims by first explaining that the first step to talk to climate change deniers is to ask questions because scientific facts and data don’t matter to deniers and the second step is to learn to story tell.

Don’t waste time
Get a verified writer to help you with Different Views on Climate Change
Hire writer
$35.80 for a 2-page paper

He then gives multiple related facts about climate change denial caused by political and economical ideologies and how the topic was first discovered by oil companies who proceeded to hide its existence. And finally, he provides other reliable resources on the subject for the viewer to use.

Brown’s purpose is to recommend a way to talk to climate change deniers in order to persuade then and educate them in a scientific yet in a casual way, so that they can understand and learn about the actuality of the issue. Brown establishes a humorous yet knowledgeable tone for high school and college students, as well as others who are interested in the topic and discussion of climate change deniers. This video is significant to my analysis because it helps show how important it is to be able to talk and converse with people who deny scientific data and how to persuade them to look at the issue differently to really understand it.

Lecturer as well as professor at Jean Moulin University, Jean-Daniel Collomb in his article, “The Ideology of Climate Change Denial in the United States,” uses his findings about the ways people’s ideology and beliefs, corporate maneuvers, and government reluctance in addition to referencing other scientific data and studies to inform others about climate change. He develops his claim by first giving background information regarding the management of natural resources, environmental regulations, as well as safety standards regarding the environment. He continues by going into detail about cases of bribery and how limitations and regulations were put in place to ‘silence’ the growing influential organizations and working to disrepute and discredit research done by scientists so that the fossil fuel industries can continue with their overbearing influence and contribution to climate change denial. Finally, he goes into detail about the ‘Religious Right’ and how it has created social wars, arguments about how eliminating the government is the only way to protect the environment, and that people are more worried about their own individual comfort than caring about what’s happening in the world. Collomb’s purpose is to reveal the truth about the prevalent issues regarding climate change in the United States in order to spread information and awareness about these issues. He establishes a formal tone for university students and professors interested in the research behind climate change in the United States. This journal article is significant to my analysis because it allows for background about the main issue of climate change deniers. Cook, John. “Understanding and Countering Misinformation About Climate Change.” Handbook of Research on Deception, Fake News, and Misinformation Online , 2019, pp. 281–306., www.climatechangecommunication.org/wp-content/uploads/2019/06/Cook_2019_climate_misinformation-1.pdf. Accessed 24 Mar. 2020.

Professor at George Mason University, John Cook in his journal, “Understanding and Countering Misinformation About Climate Change,” describes the importance to understand how and why climate change misinformation comes to be, whether denialist arguments or opinions, and how to communicate and approach it in an educated way. He develops his claim by providing a detailed introduction about the statistical research done on climate change denial and believers, canceled positive information, as well as the silencing effect. Then, he goes further into details about understanding the cause and reasons of climate change denial as well as the strong influence of gas and oil companies and political affiliations. Finally, he gives directions for further research on this topic and how to have a multiple opinionated approach about climate change misinformation. Cook’s purpose is to propose how to understand the cause of misinformation in order to be able to understand and counter these accounts of denial and provide an educational view. He creates a formal tone for university students and professors interested in the topic of misinformation and climate change. This article is significant to my analysis because it allows for a more thorough explanation on misinformation and how it affect climate action. Edwards, Chris. “Post-Outrage TV: How South Park Is Surviving the Era of Controversy.” The Guardian, Guardian News and Media, 20 Nov. 2018, www.theguardian.com/tv-and-radio/2018/nov/20/post-outrage-tv-how-south-park-is-surviving-the-era-of-controversy. Accessed 26 Mar. 2020.

A writer for The Guardian, Chris Edwards in his article “Post-Outrage TV: How South Park Is Surviving The Era Of Controversy,” claims that the show has survived by fine-tuning their satire to fit in with society and everything that is happening to lessen the criticism and cancelation threats from the public, therefore becoming balanced satire. He establishes his claim by first giving an example of how the creators did this with the episode, “The Problem With A Poo,” which references the character Apu from The Simpsons, ‘cancel culture,’ Rosanne Barr, and ‘PC crybabies.’ Then he goes on to explain how South Park has evolved and what it has evolved into. Finally, he refers back to balanced satire and how it was successfully used to continue the success and survival of the series. Edwards’ purpose is to reveal the success of using balanced satire in order to show how South Park has been able to survive all this time as well as still be relevant. He adopts a formal tone for people in high school and above who are interested in how the series has survived for so long. This article is significant to my analysis because it contextualizes what the main topic of my research is about. Kundzewicz, Zbigniew W, et al. “From ‘Atmosfear’ to Climate Action.” Environmental Science and Policy, 2020, pp. 75–83. Accessed 25 Mar. 2020.

Agricultural, environmental, climate and sociology professors Zbigniew W. Kundzewicz, Piotr Matczak, Ilona M. Otto, and Philipp E. Otto in their journal article, “From ‘Atmosfear’ to Climate Action,” argue that more positive and better messages could help with the actions and feelings towards climate change prevention. They justify their argument by first detailing what the word “atmosfear” is and what it means as well as how it works to support their original argument. Then they explain how the extreme weather events that are happening should be individually recognized and they proceed to explain the groups “hot” and “wet” conditions that factor into their argument. Finally, they argue how climate change can’t be solved easily and that it’s going to take everyone to work together to solve this issue. The purpose of this journal article is to recommend and persuade the idea of the different ways to deal and handle the prevention and awareness of climate action in order to change the way people view and perceive climate action to be. They adopt a formal tone for university students and professors in the environmental sciences. This journal article is significant to my analysis because it extends the argument about how to talk to denialists and how to help change the way people think about climate change action. Stewart, Julie, and Thomas Clark. “Lessons from South Park: A Comic Corrective to Environmental Puritanism.” Environmental Communication 5.3 (2011): 320–337. Web. Accessed 26 Mar. 2020.

PhD candidate at the University of Cincinnati, Julie Stewart, and professor of management and entrepreneurship at Xavier University, Thomas Clark in their journal article, “Lessons from South Park: A Comic Corrective to Environmental Puritanism,” explores and analyzes South Park episodes to show how it has remained popular and relevant. They back up their claim by first explaining themes around the show South Park with its jokes and parodies specifically talking about environmentalism and the shows overall rhetorical view on the subject. Then, they dive deep into the history of South Park and how it became what it is today as well as explaining how it works so well. Finally, they refer to other adult cartoons like The Simpsons, Futurama, Family Guy, etc. and exploring and describing how they are ‘social documentaries’ by being able to address serious and controversial issues that normal shows wouldn’t dare to address or joke about. Stewart and Clark’s purpose is to analyze and explain how South Park and other adult cartoons are able to use this ‘social documentary’ style, successfully. They establish a formal and sarcastic tone for university students and professors researching how adult cartoons are able to use serious topics and satirize them without major backlash. This journal article is significant to my research because it provides detail about adult shows and how they are able to talk and parody and satirize serious topics. Yono, Dylan. “ManBearPig: \'South Park\' on Climate Change.” The Michigan Daily, 16 Oct. 2019, 11:17 am, www.michigandaily.com/section/arts/manbearpig-%E2%80%98south-park%E2%80%99-climate-change. Accessed 26 Mar. 2020.

Daily arts writer for Michigan Daily, Dylan Yono in his article, “ManBearPig: ‘South Park’ on Climate Change, asserts the fact that the creators of the show South Park have never formally apologized for anything said, showed, or meant on an episode until “ManBearPig” aired which vividly showed their denialist views of climate change. He proves this to be true by referring to the episode and analyzing who and what the character ManBearPig is, coming to the conclusion that it’s just a “childish fear” and “imaginary.” He continues by explaining that at the time that the episode aired in 2006, it wasn’t an uncommon occurrence that people dismissed climate change as a real and serious problem. Yono then points out the mockery of Al Gore by making his character self-centered and self-absorbed as well as making fun of his documentary, “An Inconvenient Truth.” Finally, he talks about the episodes, “Nobody Got Cereal?” and “Time To Get Cereal,” which were created twelve years after “ManBearPig,” where it turns out that Al Gore was right all along. Yono’s purpose is to reveal the background behind the episodes “ManBearPig,” “Nobody Got Cereal?” and “Time To Get Cereal” in order to inform the readers about the context behind the episodes and what was happening at the time that they were aired. He creates an informal and objective tone for South Park fans who are interested in the meaning behind the episodes. This article is significant to my analysis because it directly corelates to the episodes that I’m researching as well as providing background information about the episodes. 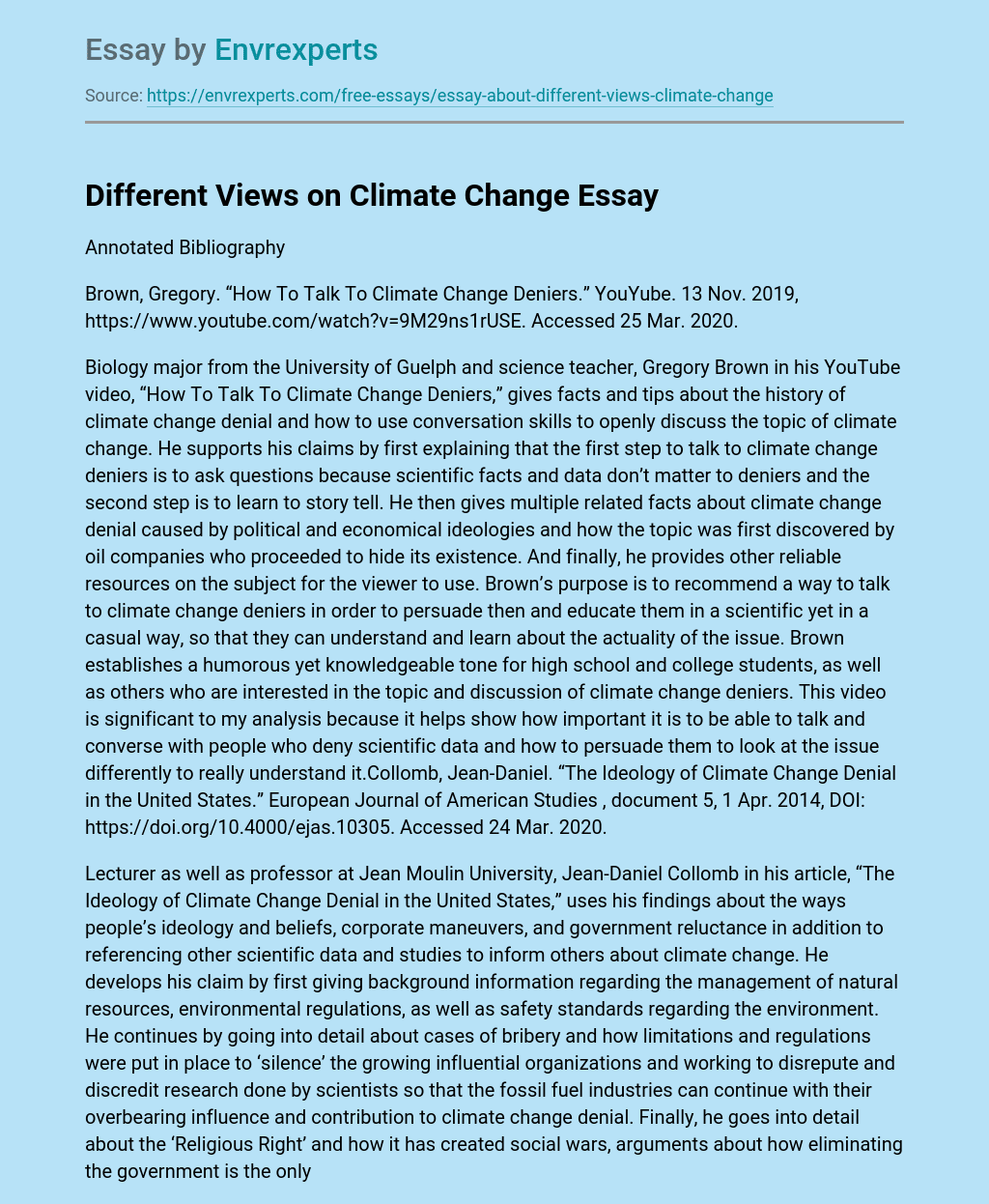