Women are the major workforce of agriculture production system in India. They participate and play a key role in a broad range of agricultural activities such as production, processing, preservation and utilization of food. Even though women constitute almost half of the workforce engaged in agriculture and animal husbandry, their involvement in decision, is very load. The right of women has been largely overlooked and in many instances their circumstance is little higher than that of farm labour. On the whole they have remained invisible workers.

Don’t waste time
Get a verified writer to help you with Digital Divide and Empowerment of Farm Women
Hire writer
$35.80 for a 2-page paper

The major reasons may be lack of authority in decision making in agricultural land production, gender discrimination in the land, lack of awareness about the new technologies in agriculture and the poor access to female extension professionals for consultation about their farm lands (Logeswari &amp; Thruchenduran, 2016). Empowerment of women will lead a conductive environment for mainstreaming them in developmental activities and utilize their potential with adequate reward at a grassroots level through providing them with both an established identity and knowledge on the varied aspects of agriculture.

In today’s digital world, it is also important to think critically about the information and communication tolls which can help women farmers who may not enjoy much physical mobility to reach out to education, employment, decision making power, exposure to media which are generally considered to be male-centric arena. India’s changing digital landscape offering tremendous scope for women’s empowerment. The digital inclusion can empowerment women through improving their individual agency vis a vis by dismantling hostile norms surrounding gender.

Agriculture is having more potentialities than any other sectors to provide diverse opportunities for women empowerment. Nevertheless, women are held back by obstructions that prevent them from feeding their families and reinvesting in their livings. They face many restrictions.
Women do not receive the similar as male farmers do. They have restricted access to land, credit and machinery.
Women are closely involved in domestic things to do include caring, cooking and cleaning, which continue to be hidden economically.
Women are lopsidedly influenced by by climate change and face greater exposure to climate risks due to the same barrier that limit their productivity.

Woman play a dynamic role in agriculture sector. They actively participate in farm activities and processing and value addition of farm products, in addition to their domestic responsibilities. Women as farmers represent the backbone of Indian agricultural and rural economy. Yet, their contributions are neglected since ages. Kushwah et al. (2018), identified challenges being faced by women farmers that hindering their contribution in agriculture.
Gender discrimination: Rooted in law and custom, in pervasive and impedes socio-economic development. Rural women are much more over-burdened than men owing to their multiple involvements. They, on an average, work for 15-16 hours a day. It reflect that farm activities, which are time and labour intensive, monotonous, respective and more drudgery prone, are generally delegated to women.
Development Bias: In spite of the contribution of women in the reduction process, persistent bias of development planners in treating them primarily as consumers of social services rather than producers, kept them away from the development programmes in agriculture and allied segments. Wherever the new agricultural technology led to multiple cropping, the work load of women has increased. Even where improved techniques have been found of the women’s activities, there is not sufficient access to training in such techniques.
Gender Bias: Women experience the ill effects of factual people, because of which, their contribution is not recognized. They often have heavier workloads that men and bear virtually sole responsibilities for family welfare and household management. However, they have either no or at best limited control over productive resource. This is even rooted in gender biases in labour markets and wage rates and has even resulted in their inadequate access to information about right, opportunities, and support programmes etc. Increasing feminization of agriculture and the agricultural workforce, with little acknowledgment of their role in land and livestock management, has meant that women have largely remained invisible to the government in terms of agricultural policies, schemes, programmes and proper support system like credit, extension services and marketing.
Limited access to resources: Large number of the constraints that rural women confront with are similar to those of all resource-poor farmers confront, such as restricted of access to land, credit, training, extension and marketing services. But, for social and economic reason, women’s constraints are more pronounced and, in general, development interventions that seek to remove constraints for poor farmers do not reach women. Rural financial institutions are also often hesitant to accept women clients because they are unable to meet collateral requirements and are inexperienced borrowers.
Inadequate access to markets: women engaged in agriculture, forestry and fishery tend to produce small quantities and have poor access to organized marketing and cooperatives. Therefore, women sell mainly to private traders and have low bargaining power, Institutions which promote women’s group access to market need to be strengthened.
Lack of technology refinement for women: Women only benefit from agricultural support programmes if the information, technology and methods. Imparted are relevant to their production activities. However, agricultural research in generally much less oriented towards adapting technologies to women’s physical status or towards addressing their tasks. Women’s low productivity stems mainly from lack of appropriate technologies suited to their work.

Women perform a crucial role in all economic activities including agriculture in India. The women contribute in a wide range of agricultural activities such as production, processing preservation and utilization of food. They perform key functions in the entire food system starting from the selection of seeds, sowing, manuring, drying, storing and feeding the family from the harvested product. Despite the fact that, farm women are the real back-bone of agriculture, their involvement in selection of suitable crops and adoption of innovative and good management practices is very low. The needs and rights of farm women have been mostly overlooked and in many instances their condition is not much better than that of farm labour. The possible reasons may be lack of authority in decision making in agricultural land production, gender discrimination in the land, lack of awareness about the new technologies in agriculture and the poor access to female extension professionals for consultation about their farm lands. It is high time to make concerted efforts to create a encouraging atmosphere for mainstreaming women farmers in developmental activities and utilize their potential with adequate reward at a grassroots level by providing them both an recognized identity and knowledge on the technical and financial aspects of agriculture. In today’s digital worlds, it is also important to think critically about the digital tools which can help women farmers who may not enjoy much physical mobility to reach out to education, employment, Decision making power, Exposure to media which are usually considered as a male-centric arena. India’s changing digital scenario is offering enormous scope for empowerment of farm women. Digital inclusion will allow women not only by developing their own actions but also by undermining hostile gender norms. 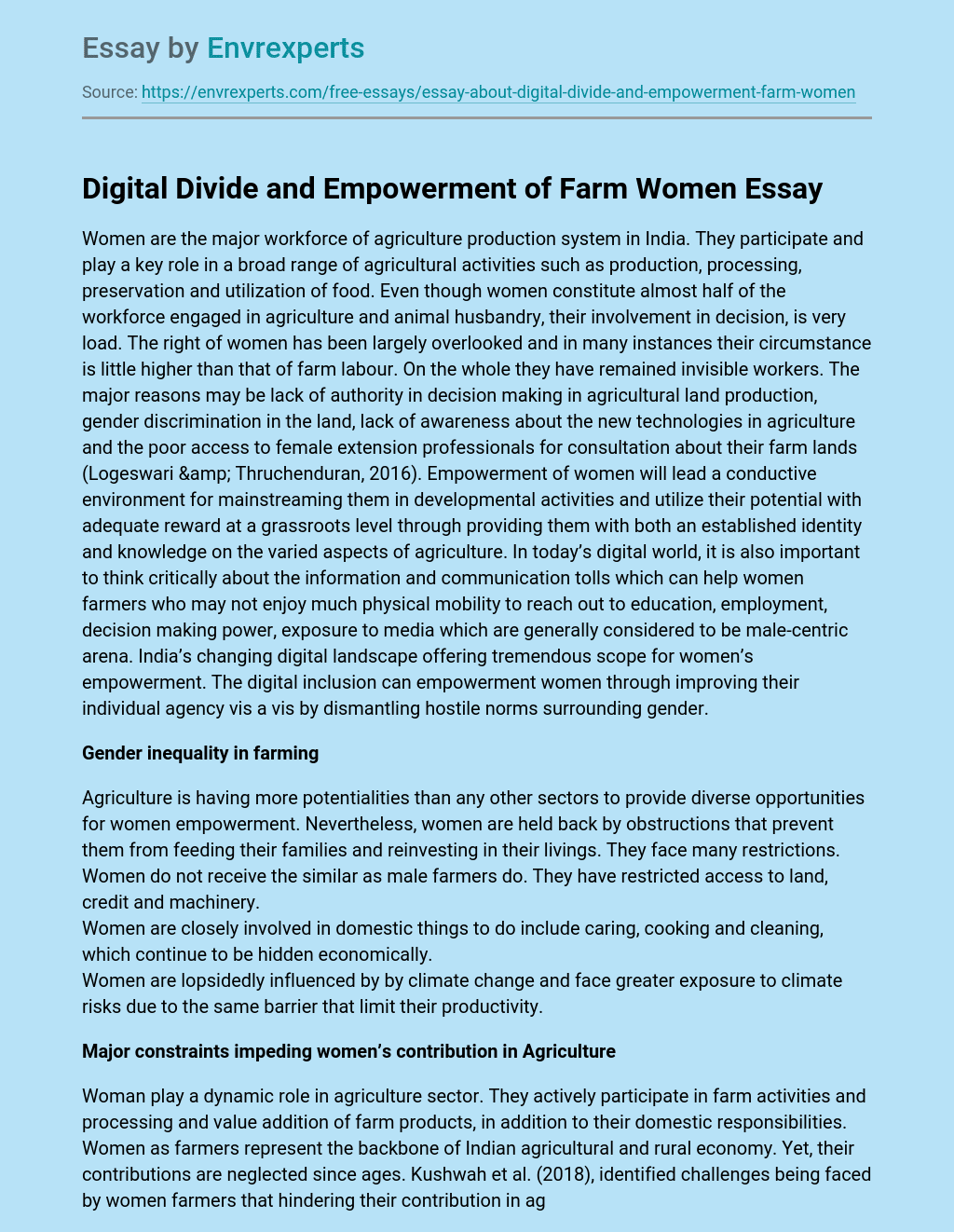