People’s lives can change in a blink of an eye. Tomorrow is not promised; you don't know what's going to happen next. Natural disasters can be predicted and some can not. Natural disasters are events that are out of human control and they are consisted of earthquakes, floods, hurricanes, tsunamis, blizzards, wildfires, tornadoes and volcano eruptions. Displaced populations are brought by natural disasters in which people are affected negatively and are even hospitalized; a solution is to become humble and come together in times of crisis.

Don’t waste time
Get a verified writer to help you with Disasters and Displaced Populations
Hire writer
$35.80 for a 2-page paper

Displaced populations are brought by natural disasters in which people are affected negatively and are even hospitalized. One of strongest earthquakes was in Chile known as the Great Chilean earthquake of 9.5 on a magnitude scale. The chilean earthquake killed about 5,700 people and about 3,000 people were heavily injured.(Deadliest Earthquakes) According to Jason Silverstein, author of the article, “Hurricane Maria is now one of the deadliest disasters in U.

S. history,” claims that Maria killed about 3,000 people in Puerto Rico, which makes it one of the nation’s deadliest disasters so far. Hurricanes cause strong winds, which creates toxic dust that is exposed to people who can pass later on in life. Japan suffered from an earthquake that led to a tsunami in 2011. A combination total confirmed deaths and missing is about 22,000.(2011 Japan Earthquake) Guatemala had a volcano explosion in mid 2018. There was no evacuation time and caused the death of nearly 200 people.(2018 Guatemala Volcano Eruption) This may not be as bad but it sure was still affecting people and they were lacking protection.

When it comes down to these disasters, people get displaced to different places and get separated from their families and/or pets. In transitioning to a different location, people starve because there's not enough food or water for everyone. People have to share beds or cots with others and its unhealthy because they don't know if the others have some type of illness so they are at risk. Medical attention is something that is lacking. The Red Cross is not accessible to rural areas, therefore, people don't get the help needed. Losing loved ones and/or pets can lead to depression or other health issues. These people lose hope and faith; giving up in life.

Millennials may argue that they shouldn't be caring about what is happening to other people during natural disasters, since nobody cares about them. Millennials are known to have a mentality in which they don't care about much and have a negative attitude towards things. They may also argue that its not their problem and that it doesn't affect them. Yes, that's true, it's not their problem but it sure does affect them; even just a tiny bit. It comes down to the nation's history and it sometimes ends up being part of a school’s topic.

A solution is to become humble and come together in times of crisis. Protection is something that lacks. Like mentioned above, there was a volcano explosion Guatemala; no time to evaluate which led people to their deaths. People should be having an emergency backpack including canned foods, waters and first aid kits. People should have an emergency plan as well, just in case something does happen. Donations are really helpful and needed. Anything can help; a penny can make a difference.

Please be aware that people do need help and that you can make a difference. Displaced populations are brought by natural disasters in which people are affected negatively and are even hospitalized; a solution is to become humble and come together in times of crisis. 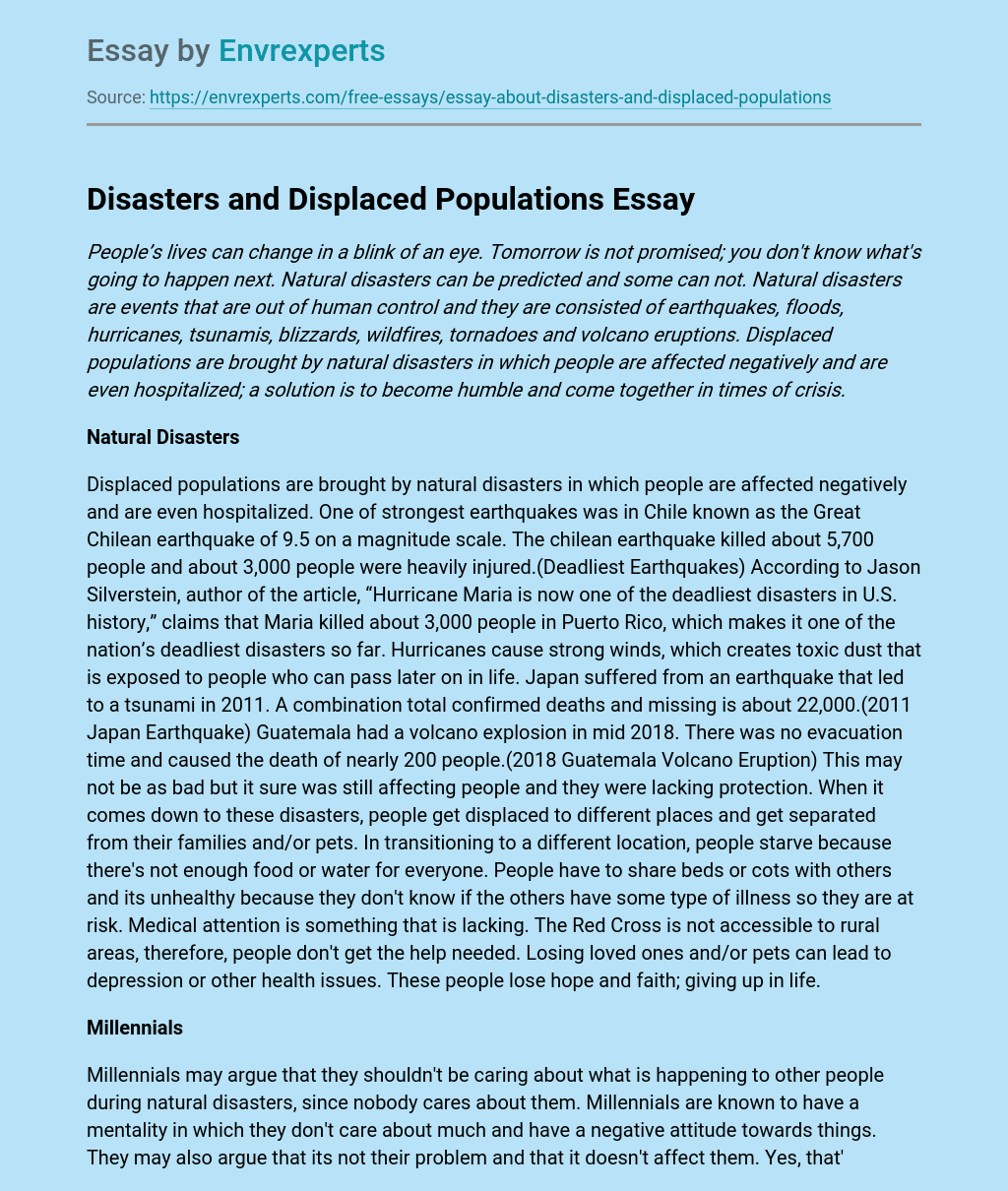