A Discussion on the Deforestation of Amazon in Brazil

Dear Angry Brazilian I am writing this letter as a response to the letter you sent to my magazine saying that the world (England I particular) should keep out of the affairs of Brazil. Saying that the deforestation of the Amazon has nothing to do with the rest of the world. Well i would like to inform you that you are completely ignorant of the facts if you believe this to be true. In this letter I will inform you of all the things you have wrong and explain that you canâ€TMt justify what is happening in the Amazon.

Don’t waste time
Get a verified writer to help you with A Discussion on the Deforestation of Amazon in Brazil
Hire writer
$35.80 for a 2-page paper

First of all I will explain exactly what is going on in the Amazon.

The Amazon rainforest is the largest forest in the entire world, it accounts for over half of the worlds remaining trees and covers over 5.5 million square kilometres. Only 60% of the rainforest is in Brazil but they are arguably the worst abusers of it. The main cause of the deforestation is human settlement and land development.

In just nine years an area of land twice the size of Portugal was cleared of trees most of the land was transformed into pastures for cattle. 30% of this deforestation is caused by farmers who donâ€TMt have any other way of making money. Instead of using lands already cleared of trees the farmers abuse there plots of land until they are infertile and they are unable to use the land. Then they move to a new plot of land and cut down more trees abuse the land again and move on to a another plot of land.

Instead of doing this I think that they should take better care of the land that they are given and that the government should take time to repair the damaged land and house people on the land that has already been cleared of trees to reduce the amount of deforestation caused by farmers. Also every time a tree is cut down another two should be planted in another location. Another large amount of the deforestation is caused by the building of super highways through the middle of the Amazon, the Brazilian government says that they are essential to the economic development to Brazil but the thing is it causes wide spread deforestation and the roads bring more settlers spreading the clearance of trees all around the roads. A third cause is the mining of gold and other metals, you say this is fine that Brazil should not be forced to leave there wealth in the ground but there is much better ways to go about it then how they mine the resources as they just move from spot to spot burning down the trees. Trees that could be used for thousands of other uses. You also mention that the trees would not be cut down if there wasn’t buyers in places like the UK but there are many stores such as habitat that refuse to buy wood that was cut down in the Amazon. With more and more companies joining this cause there will soon be little profit in the cutting down of trees unless there is some sort of deal made within which the government promises to responsible for looking after the forest and replace the trees that are cut down. You complain that we are trying to restrict the economic development of Brazil but really we are just trying to advise you how to save your forest because once itâ€TMs gone the entire lively hood of most Brazilians are gone with it so we are not trying to restrict Brazil we are trying to protect it from itself. You try to justify what you are doing by saying that Britain did it years before but it is not even close to the scale of what is happening in the Amazon and back then Britain had no idea about the damage caused by deforestation.

Deforestation has huge effects on the environment as it is a known causer of global warming because trees remove carbon from the atmosphere in the form of carbon dioxide. Less trees means more carbon. So unless Brazil has some magical way of preventing global warming then whatâ€TMs happening in the Amazon is very much the concern of the people of the United Kingdom and the people of everywhere all over the world.

Thank you for your letter I enjoyed reading it as much as you will hopefully enjoy reading mine and hope you will come round to my point of view if not then please write back.

A Discussion on the Deforestation of Amazon in Brazil. (2021, Oct 31). Retrieved from http://envrexperts.com/free-essays/essay-about-discussion-deforestation-amazon-brazil 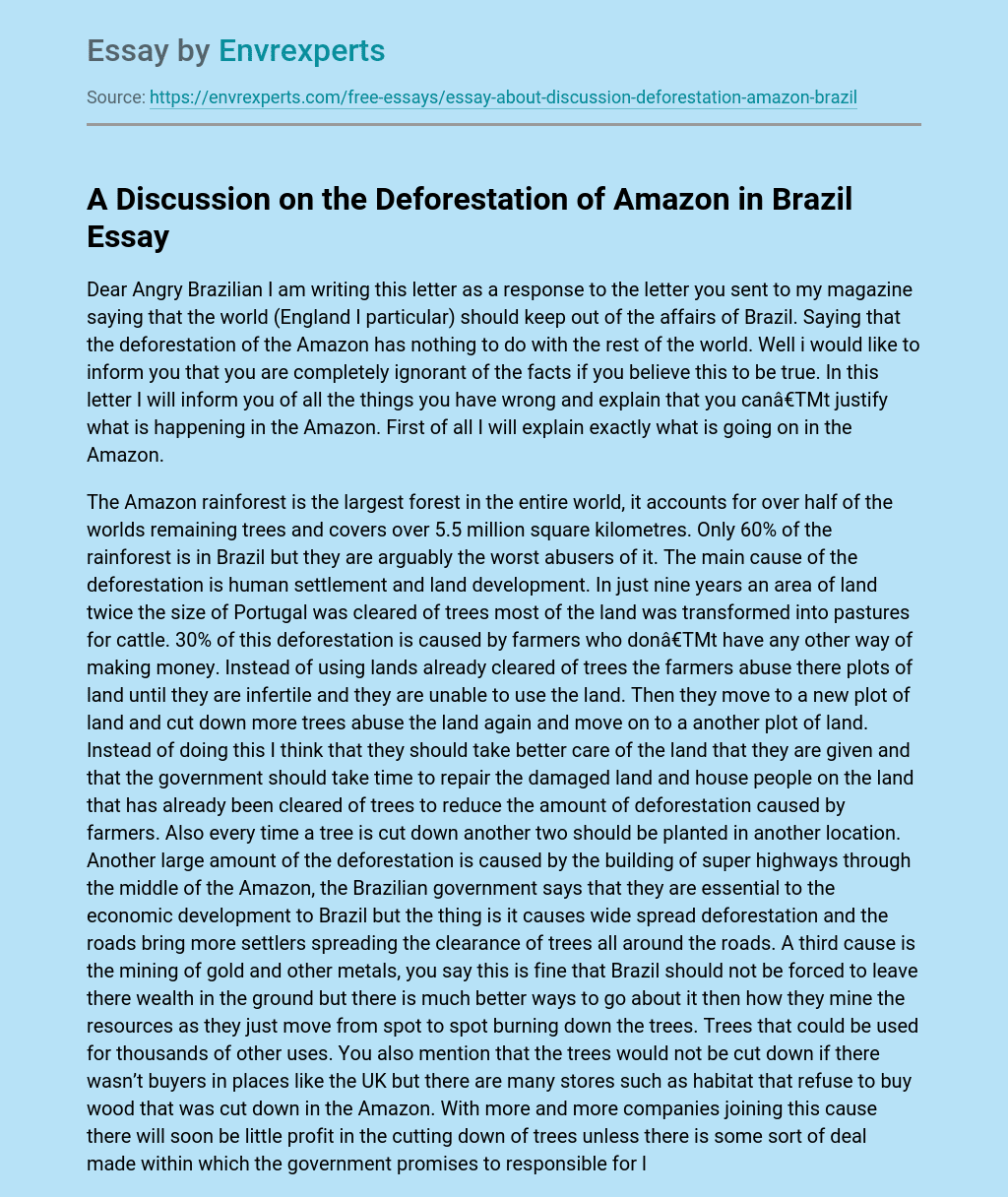