A Discussion on the Effects of Acid Rain

With scientists and so-called experts on the environment disagreeing on so many issues, it is easy for the public to be lost in the fray of what is truth and what is media hype. Though the term acid rain has been present in our society since the early 1970s, many people are not exactly clear on what it is what causes it, and the detrimental effects acid rain has on our environment. More confusing than all of the facts and scientific theories surrounding acid rain is the development of a suitable solution to reduce air pollution, which in turn leads to acid rain.

Don’t waste time
Get a verified writer to help you with A Discussion on the Effects of Acid Rain
Hire writer
$35.80 for a 2-page paper

Many experts do not agree that acid rain has in fact been caused by man made pollution because of the fact that rain is naturally acidic. This widespread disagreement delayed international action to reduce pollution for some time. However, with the coming of the 1970s an awareness of acid rain spread, and with that awareness, possible solutions were proposed.

These solutions involved making environmental changes on the international, industrial, and personal levels.

Just how does acid rain form, and what consequences does it pose to our environment? There are numerous theories as to the cause of acid rain. However, the most prevalent is the theory that electric generating plants, heating plants, and other industria lplants have been emitting an excess amount of sulfur oxides, nitrogen oxides, and volatile organic chemicals (VOCs) into the atmosphere. Once these chemicals are in the air, they react with water to form acids and fall back to the earth as precipitation.

People who believe acid rain is a natural phenomenon do so because of the fact that carbon dioxide in the air combines with water vapor and produces carbonic acid (Bolch 95).

There are several environmental risks that come with acid rain. One of these is the acidification of lakes, resulting in the lakes inability to sustain the aquatic life. In fact, Norway reported that 18,000 out of 85,000 of their lakes were acidified, and more than half of their fish population has disappeared (Brunee 23). Ground water can also become more acidic because of the way acid rain depletes the natural buffer system of the soil. Studies done in the early 70s indicate immense damage done to the forests, especially in Eastern Europe and in Germany. A sort of tree disease has been destroying a large percentage of the coniferous trees. The effect of acid rain on wildlife could include the contamination of the entire food chain by causing heavy metal accumulation in aquatic life. The effects that acid rain has on humans has not been effectively studied. However, scientists believe that occurrences of respiratory diseases such as asthma may be on the rise. Acid rain is also causing many historical buildings around the world to erode and decay at an increasingly higher rate.

Since the early 1970s, many efforts have been made to reduce the air pollution that causes acid rain. The United States government passed the first Clean Air Act in 1972. This act established standards of air quality in order to protect public health. It also required states to submit plans for attainment of these standards. The second Clean Air Act passed in 1990 took regulation of air pollutant emissions a step further. It called for a further reduction in car tailpipe emissions, as well as mandating the development of cleaner fuels to be used in metropolitan areas. It listed 189 specific toxic chemicals to be regulated as hazardous air pollutants, as well as establishing a new permitting program for stationary sites of industrial air pollution. These sources of air pollution were now required to have an EPA-issued operating permit that specified allowable emissions (Kraft 87). These governmental controls have effectively reduced air pollution in our country, but at what cost? Writer, Michael E. Kraft asks the question that burns in many of our minds. How clean is clean enough? How safe is safe enough, considering available technology and costs? Initiatives to help meet proposed air quality standards are extremely costly, and they impose substantial burdens on the state and local government. The level of spending on air pollution control in 1972 was $8 billion. By 1990 that figure has risen to $30 billion (Meiners 5). Many experts doubt that money was spent wisely by the government, and claim that the same amount of reduction in air pollution could have been attained using half of the money spent if the government was more efficient.

Obviously the U.S. government has taken a stand against pollution, and has paid the extremely high financial costs. Many people are quick to point the environmental finger at less developed countries and ask why they are not going to such measures to reduce their own pollution. Like many other things, this too comes down to money. There is a drastic inequality among the rich and the poor nations. This has a large impact on the ability of those poorer countries to address environmental concerns. In 1991, the richest 20% of the nations received 85% of the world income, while the poorest 20% received only a mere 1.4% (Sandler 20). In order to effectively solve any global problem, the nations who are most affected by the problem, and would benefit the most from a solution must take on an active role in the resolution of the problem. If these countries take an aggressive and public stand on fighting and reducing their own pollution, other countries will follow their lead (Sandler 148). A large group of nations are cooperating in order to solve a global problem; they form a sort of power, or clout that is effective in pressuring other nations to join the fight. Such cooperation and discussion between nations is crucial in solving an environmental problem like acid rain and air pollution because of the fact that one country's pollution will often harm neighboring countries. If a couple of nations take a stand against pollution while the others sit idly and watch, what benefit will the efforts result in?

The fact that the Earths population is increasing at a frighteningly high rate is no surprise to most of us. We have heard time and again about the inability of the earth to sustain such a high population. This constant increase in population is causing an extreme increase in energy needs, which is leading to more pollution. Some scientists claim that if the population increase does not stabilize, it will be almost impossible to effectively control and reduce pollution with our current technology and methods of controlling pollution (Sandler 21). Science and technology play an important role in the reduction of air pollution. When there is a better understanding of a problem it can be handled with a greater efficiency.

Scientists claim that nitrogen oxide emissions can be lowered through improved efficiency and conservation, especially in residential and commercial uses. Installing low nitrogen oxide burners will reduce the nitrogen oxide emissions. Setting emission standards on vehicles can cut pollution from mobile sources. New vehicles can incorporate improved emissions technology. Sulfur emissions can be reduced through the use of low-sulfur coal and oil, as well as flue-gas desulfurization for power plants. The implementation and use of hydro electricity, solar power, tidal energy, geothermal energy, and wind power have all been proposed as possible solutions to the problem of air pollution.

Reducing air pollution is a very complicated task because of the involvement and support it requires from foreign nations, and the industrial world. A much less recognized, but equally important level of involvement is that from the public. It is extremely easy for the public to point their fingers at big business and demand a change for the improvement of our environment, without properly examining their personal effect on the problem. Why is the public seemingly oblivious about the ways that they can help reduce this problem? It is possible that they have been confused by differing opinions, and left out of the process of implementing possible solutions, which has alienated. Consensus among scientists can speed agreement on how to respond to hazards (Kraft 18).

Though this consensus would be ideal, it is not often the case due to growing uncertainties about health and environmental effects. A more promising alternative is to improve the way scientists conduct risk assessments and discuss them with the public and stakeholders.

Credibility and trust are crucial ingredients in effective assessment and management of risks. Providing opportunities for thorough discussions of the issues at hand and consideration of public views will inspire confidence in any proposed action (Kraft 18). While some people are simply unaware of the problem of air pollution by the public, others are simply lazy. An extreme dependence on modern conveniences has contributed to this. Driving cars to every possible destination, no matter how near, seems to be an epidemic in this country. Luckily, the cure is a simple one. Alternative forms of environmentally sound transportation are usually readily available to those who are willing to utilize them. Public transportation, car pooling, bike riding, and walking are just a few ways to cut the pollution that the public sector is responsible for.

If the government had not stepped in and taken a stand for the environment, pollution levels would undoubtedly be awful today. The industrial decision-makers are too often blind to the needs and concerns of the environment because of the financial burden that environmental protection entails. And while most of the air pollution does come from industrial sites, we all could and should do our own part to help resolve this problem. Sooner or later we have all got to realize that in order to save the environment from disaster, we are going to have to be willing to sacrifice some of the conveniences that we have become so accustomed to.

A Discussion on the Effects of Acid Rain. (2021, Oct 31). Retrieved from http://envrexperts.com/free-essays/essay-about-discussion-effects-acid-rain 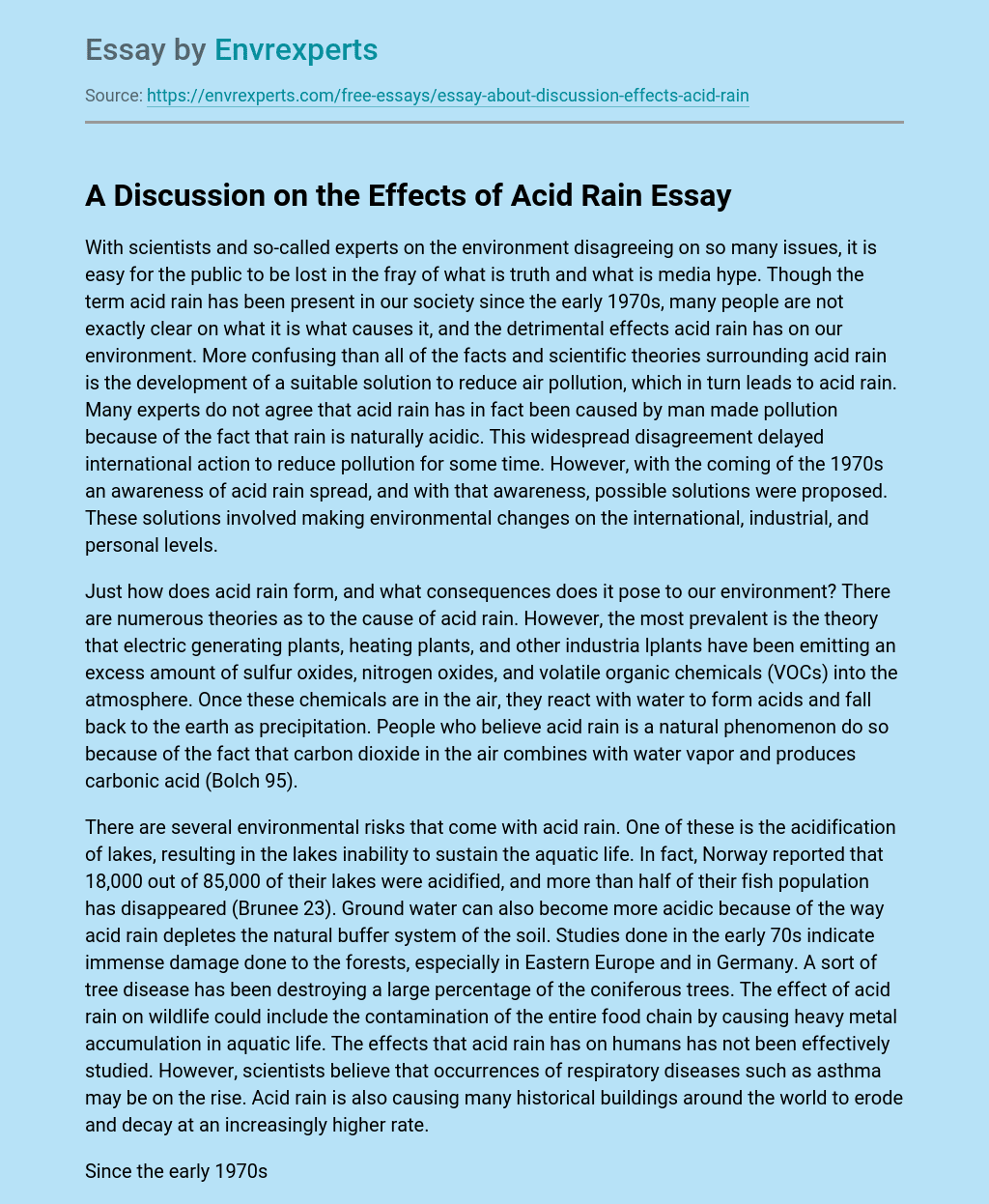