Over the past few decades, the effects of global warming have started becoming blatantly apparent. Gigantic killer storms, rising sea levels and the mass extinction of species are just going to get worse if something is not done. Due to the rapid overpopulation of the human race, the deforestation of vast amounts of land, and the melting of icecaps as a result of the global increase in temperature of the world, the Earth as it is known is on the brink of destruction.

Don’t waste time
Get a verified writer to help you with A Discussion on the Effects of Global Warming and Overpopulation in the World
Hire writer
$35.80 for a 2-page paper

Many think that global warming is just a myth, but that belief is quite misguided and in fact this is a serious issue that will cause mass destruction in the near future. If something is not done to slow the rate of greenhouse gases released into the atmosphere and clean up individual carbon footprints, the world will become inhabitable.

The rapid overpopulation of the human race has caused many problems for the environment. For the first time ever the population is at over seven billion people.

Only in the last one-thousand years, has the population ever reached over one billion people (Population Reference Bureau, 2013). The population has sextupled in 1/10th the time humans have been the dominant species (Census.gov 2008). With basic knowledge of how the human body works, one should know that humans inhale oxygen and exhale carbon dioxide, a dangerous greenhouse gas. With over seven billion people having to inhale and exhale to stay alive, carbon dioxide is going to build up quickly. This rapid growth in population coupled with the ingenious inventions of the twenty first century has caused an imbalance in nature.

More people means more housing and larger industrialization and modern technologies, which are primarily run on fossil fuels. Burning fossil fuels releases carbon dioxide into the atmosphere (Scientific American, 2009). These carbon dioxide molecules trap the sun's rays, warming the Earth ("An Inconvenient Truth", 2006). More people also means that more food needs to be produced. One of America's favorite sources of food, the cow, produces methane, another greenhouse gas. In fact 14% of greenhouse gases can be attributed to agriculture. Methane is about 23 times stronger than carbon dioxide (Silverman, 2013). There are more people to feed and to produce waste than ever before because of modern medicines, medical practices and hygiene rituals. With all the knowledge gained in the Modern Era, humans are able to live upward of one hundred years (Science Daily, 2013). The overpopulation of humans is a larger umbrella for many smaller causes of global warming. Humans have abused natural resources like fossil fuels and cows that produce copious amounts of dangerous greenhouse gases. Now humans are able to live longer, they are also able to cause damage for longer amounts of time. Humans must become conscious of their destructive nature and find ways to decrease their carbon emissions.

The deforestation due to the expansion of cities is another major cause of global warming. Trees ‘inhale' carbon dioxide and 'exhale’ oxygen. By doing this, trees get rid of those harmful gases that trap in the sun's rays (Villazon, 2012). By cutting down trees, the amount of carbon dioxide taken from the atmosphere is also going to be reduced (National Geographic, 2012). With amounts of carbon dioxide being produced at an all-time high from its usage in industry, transportation and the production of electricity, among other usages, the human race cannot afford for the number of plants and trees to deplete as it has been (EPA.gov, 2013). Forest floors are generally moist. Take away the protective canopy of trees, the forest floors will quickly dry up and become dry deserts. This will be detrimental to the world's delicate ecosystem. Deforestation is caused by many different factors. One of the most noteworthy causes of deforestation is the expansion of agriculture. Farmers feel that they need more land to provide for their families and for the consumer market. Loggers, people who cut down food for lumber, are another reason deforestation has rapidly taken place. Loggers cut down trees to build roads to get to trees deeper in the forest. This sometimes takes place illegally (National Geographic, 2012). Trees are important resources that are most often taken for granted. Trees provide many goods like paper and lumber that society take for granted. They also take carbon dioxide, a gas that is not only poisonous to people in large amounts but also traps the sun's rays in our atmosphere, and turn it into oxygen, a gas we could not survive without.

Melting icecaps are only just beginning to be a problem in the world and will become an even more serious problem in the future. The melting of icecaps will raise the sea level potentially putting areas like Florida underwater. This would displace hundreds of thousands of people who would have to move to new areas of the country or world ("An Inconvenient Truth", 2006). The melting of the icecaps has effects other than just the rising sea level. Since ice floats are melting, animals like polar bears are drowning, stranded in the ocean because they have nowhere to rest. The icecaps also work as a global air conditioner. The coolness from the North Icecaps Comparison and South Poles keeps the rest of the world cool. If (Dunbar, 2012) the icecaps were to completely melt, the world's temperature would rise, making it even hotter than it already is (NRCD, 2005). The icecaps contain most of the world's fresh water. It is quickly being lost to the salty sea by melting. Many indigenous people rely on the icecaps for fresh water in the homeland ("An Inconvenient Truth", 2006). The melting of the icecaps is a vicious cycle. The earth keeps getting hotter, so the ice is melting to cool the Earth. But when the ice completely melts, there will be no way to cool the Earth. The scariest part of the melting of the icecaps is that the rate at which it is melting. New studies that were done by NASA show that the older, thicker ice is melting at a rate of 15.1% per decade. The area of the multi-year ice is shrinking even faster at 17.2% per decade (Dunbar, 2012). The icecaps are an important natural resource that many take for granted. It has an important role in keeping balance in the world. With its rapid depletion, the world can expect to see dramatic climate changes in the generations to come.

Whether or not you believe in global warming, the Earth is taking a toll from the great influx of humans it now houses. People are not taking care of this lush, green planet. From cutting down trees that take carbon dioxide out of the air and put fresh clean oxygen in it, to over using and abusing the ingenious inventions of the twenty-first century, the Earth is slowly dying from the neglect of its inhabitants. But don't despair! There are many ways that one can reduce his or her carbon footprint. Simple steps like turning off lights and electronics when they aren't in use can go a long way. An example of a bigger way to help the environment would be to buy a green car that runs on an alternative energy source; electricity, water, and oil are all good sources of alternative energies for cars. Even just driving a car with better gas mileage helps. They also save you money in the long run. If buying a new car just isn't in the budget, public transportation, biking, walking and taking fewer trips on an errand run are other ways to help the environment. Thinking about ways to make your house greener? Simple improvements like sealing drafts in homes can save on your heating bills and also makes your home more energy efficient. Buying green appliances and light bulbs are another way to cut down on your energy use in the home. Light bulbs are especially easy to buy and replace and can really help lower a home's energy usage (NRCD, 2005). These are just a few ways to help the environment. Some of these ideas are very simple and not too expensive. They may even save you money on your bills and expenses. Going green isn't just good for the environment, but it can also be good for your wallet.

A Discussion on the Effects of Global Warming and Overpopulation in the World. (2021, Oct 31). Retrieved from http://envrexperts.com/free-essays/essay-about-discussion-effects-global-warming-and-overpopulation-world 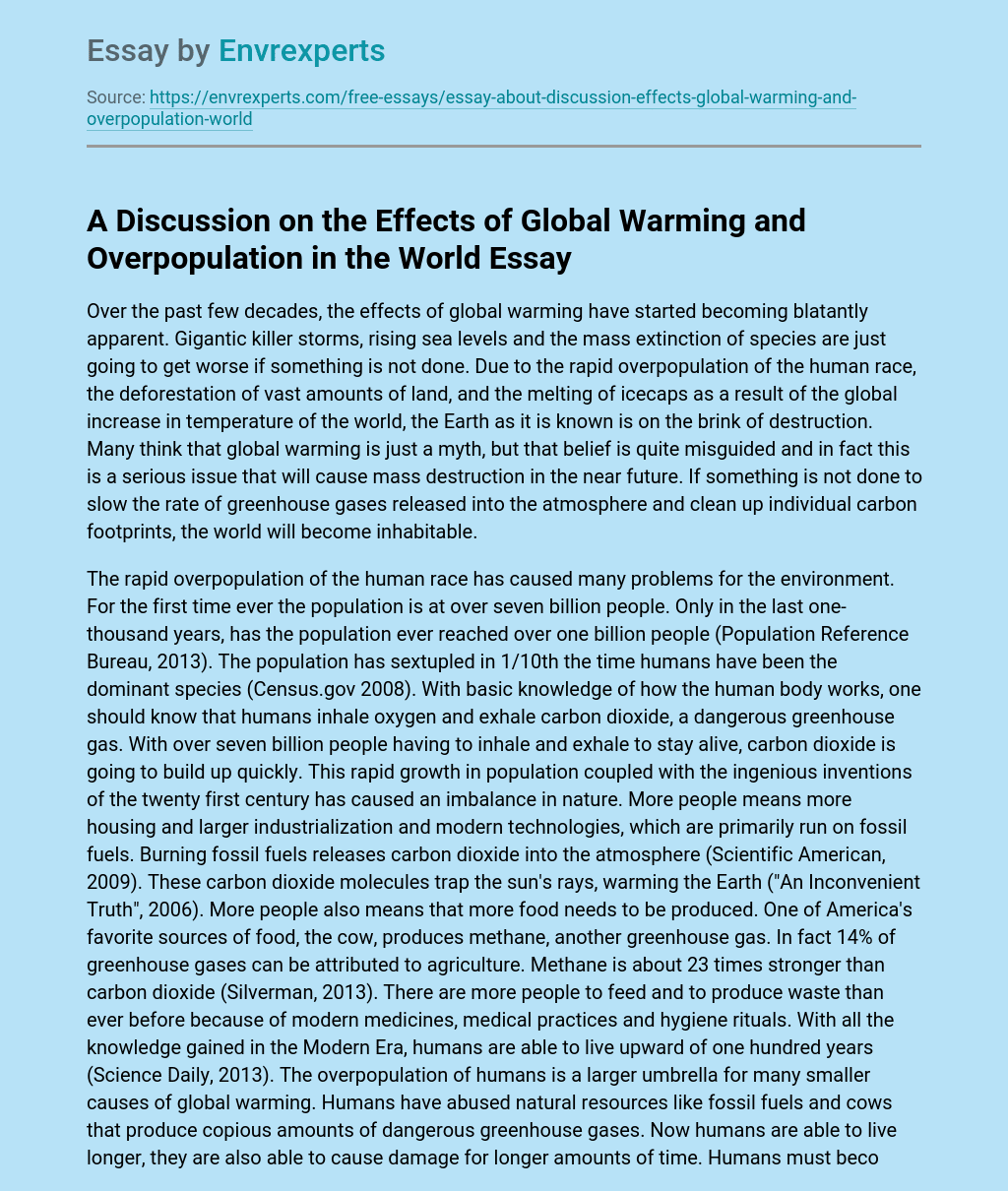