In a hundred years from now global warming will be the number one killer of humans. One day what we know about climate change will doom our extinction. One day in the future we will extinct our kind. The day of human extinction will soon dawn on us and the next generation. Global warming is a big problem that is real, don’t deny your death, face it. Global warming is a big problem that need to be stopped or it could cost you your life.

Don’t waste time
Get a verified writer to help you with A Discussion on Global Warming Being the Future Number One Killer of Humans
Hire writer
$35.80 for a 2-page paper

According to Oxdale global warming is happening now in Earth’s atmosphere (9). But with causes that are preventable, effects can be still be catastrophic.Temperatures are rising, the weather is raging and sea levels are rising slowly these are all signs that global warming is real.

With temperatures rising slowly but surely since we humans have started emitting carbon dioxide into the earth’s atmosphere. But, now according to Jenkins global surface temperature reconstructions have shown that Earth has been warming up since the 1880.

Each year slowly warming up can seem normal but, temperatures all add up in the end. Average temperatures have now climbed 1.4 degrees Fahrenheit (0.8 degree Celsius) around the world since the 1880, much of this has happened in recent decades, according to Jenkins. Many place are feeling the affect more than others. The Arctic for one, average temperatures in place like Alaska, western Canada, and eastern Russia have risen at twice the global average, according to Lee. According to Jackson scientists have high confidence that global temperatures will continue to rise for decades to come, largely due to greenhouse gasses produced by human activities.

The Intergovernmental Panel on Climate Change, which includes more than 1,300 scientists from the United States and other countries, forecasts a temperature rise of 2.5 to 10 degrees Fahrenheit over the next century(Wilste). The number of record high temperature events in the United States has been increasing, while the number of record low temperature events has been decreasing, since 1950, the U.S. has also witnessed increasing numbers of intense rainfall events(Jenkins). But, temperature rise is only the beginning to global warming, future temperatures are expected to climb (Lee).

The most obvious way to see the change is to just look out your window, yes the weather. When global warming strikes the weather will knock you off your feet. Global warming is making hot days hotter, rainfall and flooding heavier, hurricanes stronger and droughts more severe (Coplin). Just take a look at California and its endless drought that its facing. According to Coplin global warming is also causing dangerous changes to the landscape of our world, adding stress to wildlife species and their habitat, wet places in the southeast have generally become wetter, while dry places have become drier with heat waves have become more frequent and intense, while very cold days have decreased (Global warming is already…). Extreme heat, heavy downpours, and flooding in the midwest will affect infrastructure, health, agriculture, forestry, transportation, air and water quality, and more. Climate change will also exacerbate a range of risks to the Great Lakes (Jackson). According to the Lee, the extent of climate change effects on individual regions will vary over time and with the ability of different societal and environmental systems to mitigate or adapt to change

Sea level rise is the most obvious that global warming is real. Sea levels have risen before and they will again. According to Shaftel Sea level rise is caused primarily by two factors related to global warming: the added water coming from the melting of land ice and the expansion of seawater as it warms. Ice loss from Greenland and West Antarctica: As with glaciers and the ice caps, increased heat is causing the massive ice sheets that cover Greenland and Antarctica to melt at an accelerated pace. Scientists also believe meltwater from above and seawater from below is seeping beneath Greenland's and West Antarctica's ice sheets, effectively lubricating ice streams and causing them to move more quickly into the sea. Moreover, higher sea temperatures are causing the massive ice shelves that extend out from Antarctica to melt from below, weaken, and break off (Wilste). The first chart tracks the change in sea level since 1993 as observed by satellites.  This ice can raise the water by more than a foot. Global sea level have now rose about 17 centimeters (6.7 inches) in the last century, the rate in the last decade, however, is nearly double that of the last century (Jenkins). At this rate ﻿by the year 2200 earths waters will rise 16 extra feet and by the year 2300 coastal lines will be flooded out (Earth under water). Most places are vulnerable But, the most consequential is south Florida where the city is 8 inches from coastal lines (Bromi).

Global warming can be slowed and eventually stopped but, we have humans done nothing when our lives matter most. When temperatures increase, sea levels rise up and weather becomes so harsh realize that global warming is real. So now sit and think would you want to die of something you can prevent?

A Discussion on Global Warming Being the Future Number One Killer of Humans. (2021, Oct 31). Retrieved from http://envrexperts.com/free-essays/essay-about-discussion-global-warming-being-future-number-one-killer-humans 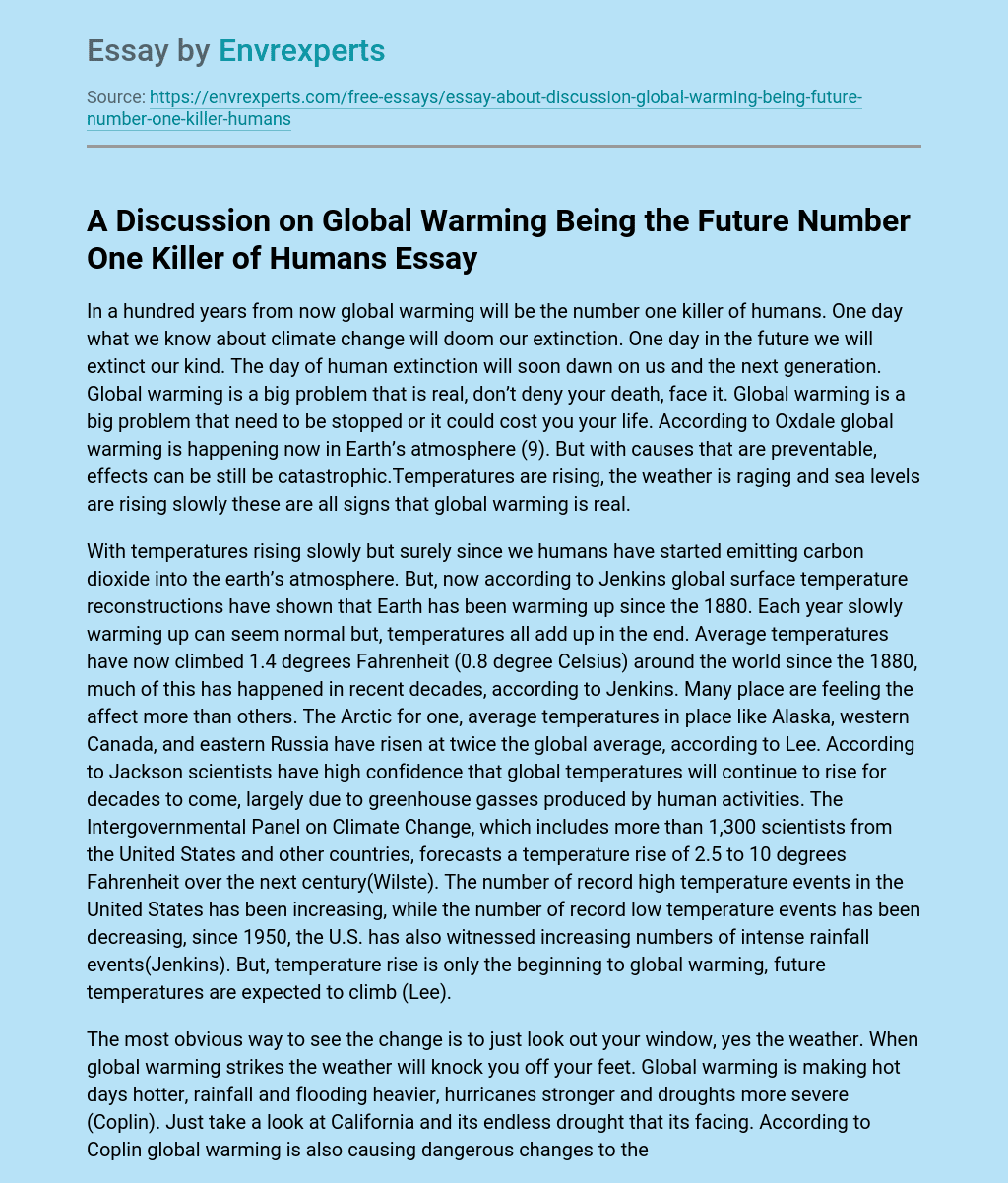