A Discussion on the Greenhouse Effect

The glass windows of a greenhouse let in sunlight. The sunlight warms up objects inside the greenhouse. These objects then give off heat. The glass of the greenhouse, however, does not let out the heat. If the greenhouse lacks ventilation, all the heat stays locked inside and the temperature rises. This greenhouse effect also causes the inside of an automobile to become hot if its windows remain closed on a sunny day.

The Earth and its atmosphere are like a giant greenhouse.

Don’t waste time
Get a verified writer to help you with A Discussion on the Greenhouse Effect
Hire writer
$35.80 for a 2-page paper

Variations in the amounts of carbon dioxide and water vapor in the air can therefore have a significant effect on how much heat is retained by the atmosphere.

The total amount of carbon dioxide present in the Earth's atmosphere remained nearly constant until the 20th century, when the burning of fossil fuels such as coal, fuel oil, gasoline, and natural gas began to release large quantities of carbon dioxide into the atmosphere.

The combustion of fossil fuels brought about an ever-increasing rise in the carbon-dioxide concentration in the atmosphere. Some scientists believe that, as the greenhouse effect is intensified, long-term climatic changes on the Earth will result.

According to some predictions, significant alterations in climate patterns could become apparent by the end of the 20th century. Estimates of global average temperatures have projected an increase of as much as 9F (5C) before the year 2100. Such a rise in global temperature, some scientists hypothesize, would produce new patterns and extremes of drought and rainfall, which would seriously disrupt food production. Temperature increases in the polar regions could be as much as three times greater than the global estimate, which would cause the polar ice caps to melt at a rapid rate and result in appreciably higher coastal waters.

Other factors may reduce the effect of an increase in carbon dioxide and thus prevent a rise in temperature. One of these factors is the rise in the amount of dust in the atmosphere, as the result of a volcanic eruption, for example. This could lead to greater reflection of the sun's light by the atmosphere, which would tend to lower the temperature on Earth. Another factor helping to minimize the effect of increased amounts of carbon dioxide is the greater absorption of the gas by the oceans. Some scientists believe that water vapor plays a much more significant role than does carbon dioxide in the Earth's greenhouse effect and that fluctuations in it are therefore much more important.

A Discussion on the Greenhouse Effect. (2021, Oct 31). Retrieved from http://envrexperts.com/free-essays/essay-about-discussion-greenhouse-effect 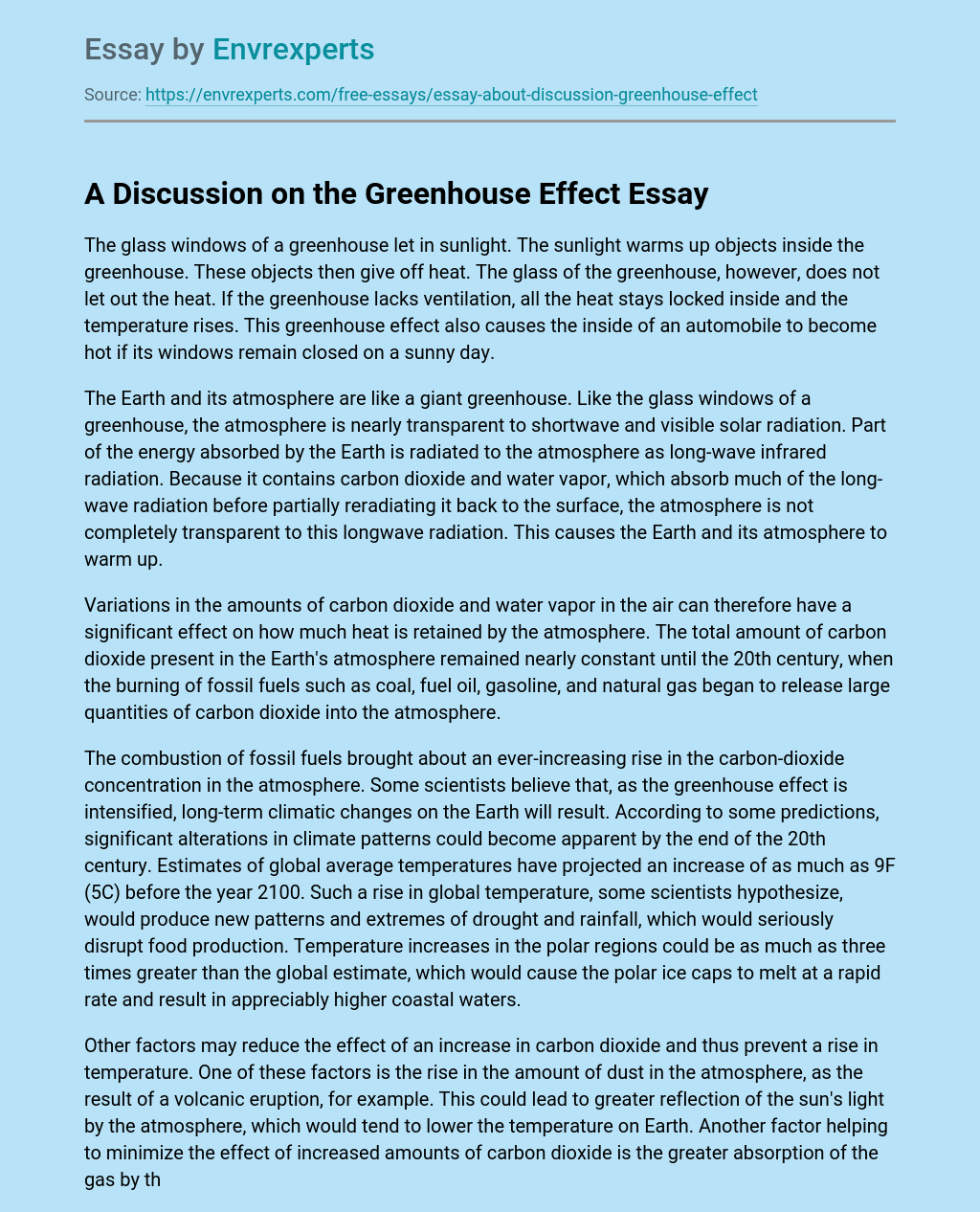