A Discussion on the Growing Global Issue of Overpopulation

Out of the many growing problems on earth, environmental, political, and social, one of the most dangerous, rapidly growing, often ignored issues is overpopulation. The world has approximately 7 billion people living on it currently, and the population is still growing. It is estimated that in the year 2050 that number will reach 9 billion. A variety of serious problems stem from overpopulation, such as the depletion of natural resources, global warming, increased crime rate, and devastating poverty. Overpopulation is a global issue that continues to grow and threaten future generations.

Don’t waste time
Get a verified writer to help you with A Discussion on the Growing Global Issue of Overpopulation
Hire writer
$35.80 for a 2-page paper

It negatively affects community and the environment, and will continue to grow exponentially.

In the year 1 A.D., the human population was at about 300 million but by 1850, the world population had reached 1 billion (“Population Growth and Control”). This number grew to 4 billion by 1975 and then in only 12 years grew to 5 billion. Population expansion has lessened slightly in the past decade, “The 21st century brought further diversity, expansion, and movement of the U.

S. population alongside the rapid expansion of the national economy" (Evan Brown). But although the growth has slowed down, the estimated number of people by 2050 is 9 billion (“Population Growth and Control”). There are several reasons behind this surge in population growth in the past 2000 years. Many scientific and medical advances have been made such as the invention of the microscope, advances in anatomy, the study of cells, the discovery of penicillin (and ultimately antibiotics), surgical advances, research on viruses and bacteria is published, vaccines are invented to prevent disease, anesthetic is discovered, sanitation is made more of a priority (“History of Medicine”).

All these important discoveries decreased the death rate and increased life expectancy. Other advances in agriculture, like industrialized farming, and easier material production( with factories and machines) have made living easier and therefore has increased fertility rates and decreased death rates.

Overpopulation is the excessive population of an area to the point of overcrowding, depletion of natural resources, or environmental deterioration ("Dictionary, Encyclopedia and Thesaurus"). One of the most dangerous effects of overpopulation is the threat it poses to the environment. More people means less resources. Overpopulation causes deforestation, depletion of water supply, and loss of other important natural resources that are either nonrenewable, or are being used too fast to replace (David Newton). Pollution is also a huge problem that comes from excessive population. Industrialization of cities and towns creates air pollution that is harmful to the atmosphere, and water pollution that is dangerous to human health. Soil degradation (loss of nutrients) and loss of biodiversity are also the results of overpopulation. Over-farming land robs soil of its natural nutrients and makes soil less fertile for the future. Humans destroy habitats so many animal species become threatened, endangered, or even extinct (“Population Growth and Control”). The rate that the population is growing means that this trend can only get worse.

Population growth does not only affect the environment, but it also affects more political/communal aspects of the world. For example, overpopulation causes widespread poverty and increased crime-rate in highly-populated areas (David Newton). Restrictive laws because of the above mentioned problems can cause trouble when they are put into place, causing riots and deaths (Newton). Literacy rates are lower and new diseases emerge and spread faster because of concentrated population (Newton). Because of the number of people using antibiotics, overpopulation is also responsible in part for the issue of antibiotic resistant bacteria ("Population Growth and Control”) Infant and child deaths become more frequent in developing countries that are overpopulated because people do not have access to contraception or their religion does not permit them to use birth control (Valerie Tarico).

Population is a growing problem, and little has been done about it. In the article Population Growth and Control, some of the efforts against over population are described, "Some societies advocate 'zero population growth,' in which the widespread use of birth control maintains the birth rate at equal numbers to the death rate." The article, however, goes on to say that this strategy is sometimes seen as restrictive and causes problems, therefore it is not widely accepted. In China, the National Population and Family Planning Commission has enforced a "one child policy" to prevent China's dangerously high (now 1.3 billion) population from getting out of hand (Maria Trimarchi). This means that Chinese families are only permitted to have one child and consequently, almost all families in China now are made up of a mother, a father, and one child (Trimarchi). This strategy has been very effective and has prevented about 400 million births in China and decreased the average number of children born to a woman to around 1.7. Part of why the strategy has worked is that China provides free birth control for women and rewards single-child parents (Trimarchi). Although these statistics and advances are good in the greater sense of the world, the laws have been criticized on a smaller scale, for taking away basic human rights to reproduction (Trimarchi). The law has resulted in a variety of problems among which is female infanticide, the act of killing or abandoning female infants because of the ancient societal preference for the male sex (Trimarchi). China has since made it illegal to discriminate against women who give birth to baby girls and prohibited sex-selective abortions to solve this problem (Trimarchi). China continues to look for ways to improve their policies and is currently the only country making extreme efforts to prevent overpopulation.

A Discussion on the Growing Global Issue of Overpopulation. (2021, Oct 31). Retrieved from http://envrexperts.com/free-essays/essay-about-discussion-growing-global-issue-overpopulation 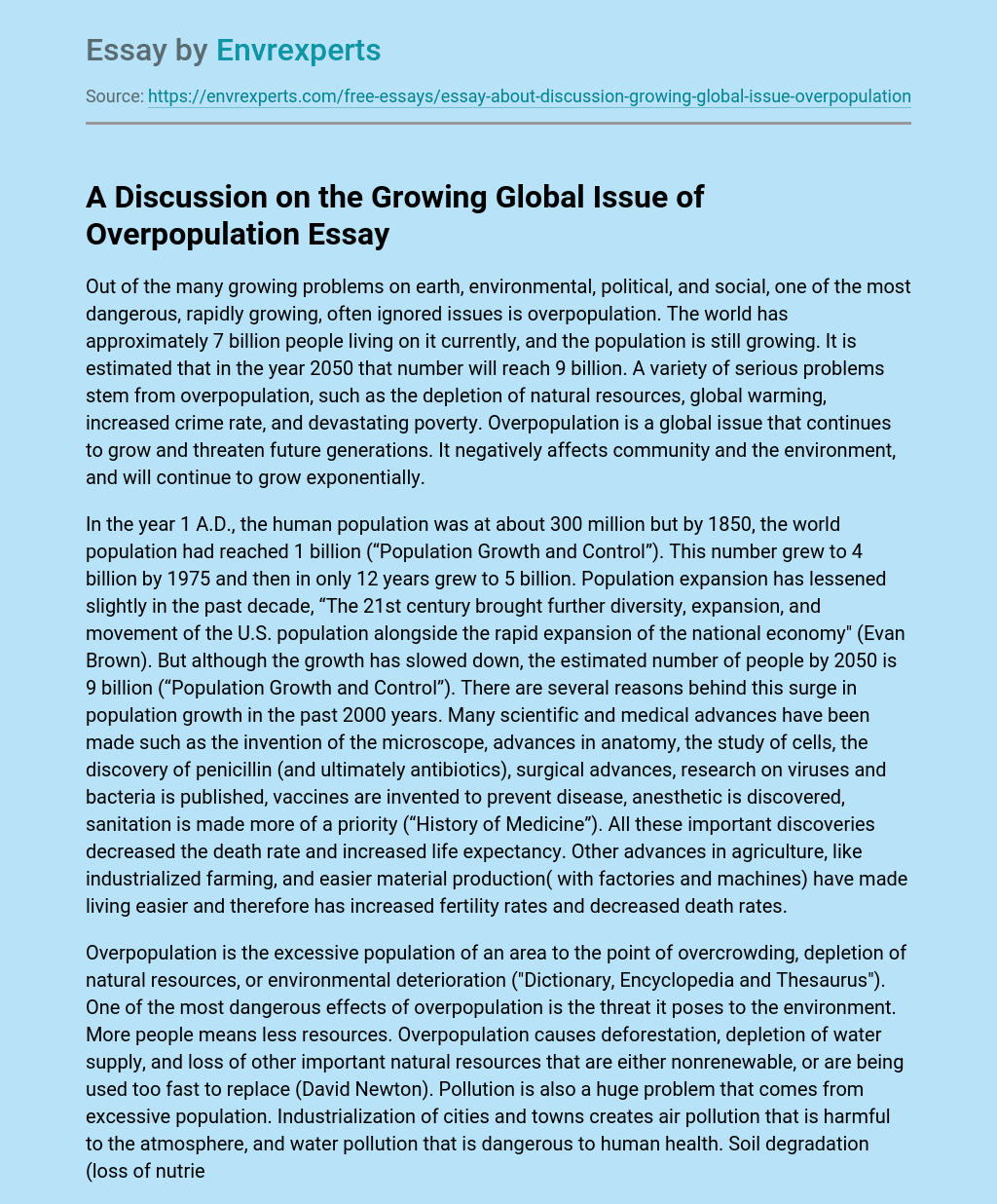