Water, a quintessential resource that is commonly overlooked and undervalued in the United States by many people. Water is vital to the survival of all life on Planet Earth; including human, animal, and plant life. A question we need to ask ourselves is what would happen if all of our water disappeared tomorrow? How would we survive? How can we conserve water today so this does not happen?

Many third world countries face a problem like this today. They have little to no access to clean drinking water.

Don’t waste time
Get a verified writer to help you with A Discussion on the Importance of Water on Earth and the Conservation of Water on the Planet
Hire writer
$35.80 for a 2-page paper

According to the World Health Organization (2004), “Drawing on data from 54 low- and middle-income countries, the WHO/UNICEF report concludes that 38% lack access to even rudimentary levels of water, 19% lack sanitation and 35% do not have water and soap for handwashing” (p. 33). Not having access to clean water can lead to health problems and disease. According to the National Academy of Engineering (n.d), it is estimated that around 5,000 children die from diarrhea related diseases such as cholera worldwide each year.

Much of the water in these countries is contaminated with fecal matter, waste, and harmful pathogens.

In addition to disease and deaths associated with dirty water, an exponential amount of time is also wasted retrieving water from sources. According to the World Health Organization (2004), “Over 40 billion work hours are lost each year in Africa to the need to fetch drinking water” (p. 34). All this precious time wasted could be spent on items like education, work, and preparing meals. Many children and women in Africa are tasked with the daily responsibility of fetching water. Because children are out fetching water this takes a toll on their education and they must miss school as a result (National Academy of Sciences, 2007, p.1). These under privileged children may not make it to higher learning institutions as a result of this. This may in turn lead to poor economic outturns due to the fact that people with high school diplomas or less may not get a job in the corporate world. This leads to poverty and the freeze of rising up the economic ladder. Illness from aforementioned water borne diseases can also attribute to a lack of production. A sick person who has constant diarrhea cannot be productive because they must constantly stop and take care of their toiletry needs. A server concern from chronic diarrhea is dehydration (Mayo Clinic, 2014, p.1).

It is imperative that action is taken to reduce the death toll from a preventable cause of death. Every Human should have access to potable water worldwide to drink and to shower with. According to the National Academy of Engineering, (n.d.) "Lack of clean water is responsible for more deaths in the world than war” (para. 2-3). In the United States, in states such as Arizona, and New Jersey it is customary that businesses give the public free glasses of water. There is no codified law on this matter; however, it is something that can be expected in every restaurant. If only every country followed this same policy. In Europe this idea is unheard of, most to all restaurants charge 2-3 Euros per glass of water. If you think how many glasses of water you drink during a meal this could really add up. According to the National Academy of Sciences (2007), “The United Nations and other organizations estimate that each person requires access to a minimum of 20 to 50 liters of water per day for drinking, food preparation, and personal hygiene” (p. 3). This is roughly 5.28 to 13.20 gallons. Compared to other countries people in the United States on average spend less in the amount of money on water per year. This can be affected by a few factors, including but not limited to, the cost of transportation from source to user, total demand, and price subsidies (The Water Information Program, n.d, p.1). According to the Water Information Program (n.d.), "The average American household consumes about 127,400 gallons of water during a year. Homeowners in Washington, DC, pay about $350 for that amount of water. Buying that same amount of water from a vendor in Guatemala City would cost more than $1,700” (p. 1). Many of the States in the U.S. have a different amount of water supply. As depicted in picture 2, consumptive water use or water withdrawals vary per state. States like California, and Texas use the most water out of any state in the United States, the picture demonstrates this. California, and Texas used approximately 20,000 to 46,000 millions of gallons of water per day. This fact is evidence of why these regions face water problems like droughts. The present drought in California being dealt with right now is a prime example of this.

Having a finite and scarce source of water in a third world country can lead to a host of problems as previously mentioned. There are ways that these countries can purify and import water to slim down these problems. A cost effective solution to turn un-potable water into potable water is called the lifestraw. The lifestraw is a reusable filtration device that costs about $20 per filter and filters up to 264 gallons (Lifestraw, 2014, n.p). According to Lifestraw (2014), “Lifestraw removes 99.9999% of waterborne bacteria, including E. coli and salmonella” (n.p). In addition to the lifestraw, another way to import water safely is to desalinate it. Desalination is process that is performed by taking saltwater and removing the salt out of it by multiple processes (National Academy of Sciences, 2007, n.p). Desalination does not work in certain countries because it requires access to a body of salt water. Tunisia is an example of a country that uses desalination to import its water. Tunisia is a country that borders the Mediterranean Sea. The process of desalination can be very costly and that is why it is not a very effective option for some developing nations. Desalination is also used as an option in the United States for states like California that are facing a drought. The average cost of desalination per 1000 gallons in Marin County, California in 2010 was $7.50 (Tom Pankratz, 2009, p.3).

To conclude, water is vital to the survival of all life on Planet Earth; including human, animal, and plant life. Many third world countries face a problem like this today. They have little to no access to clean drinking water. In addition to disease and deaths associated with dirty water, an exponential amount of time is also wasted retrieving water from sources. It is imperative that action is taken to reduce the death toll from a preventable cause of death. Finally, having a finite and scarce source of water in a third world country can lead to a host of problems as previously mentioned.

A Discussion on the Importance of Water on Earth and the Conservation of Water on the Planet. (2021, Oct 31). Retrieved from http://envrexperts.com/free-essays/essay-about-discussion-importance-water-earth-and-conservation-water-planet 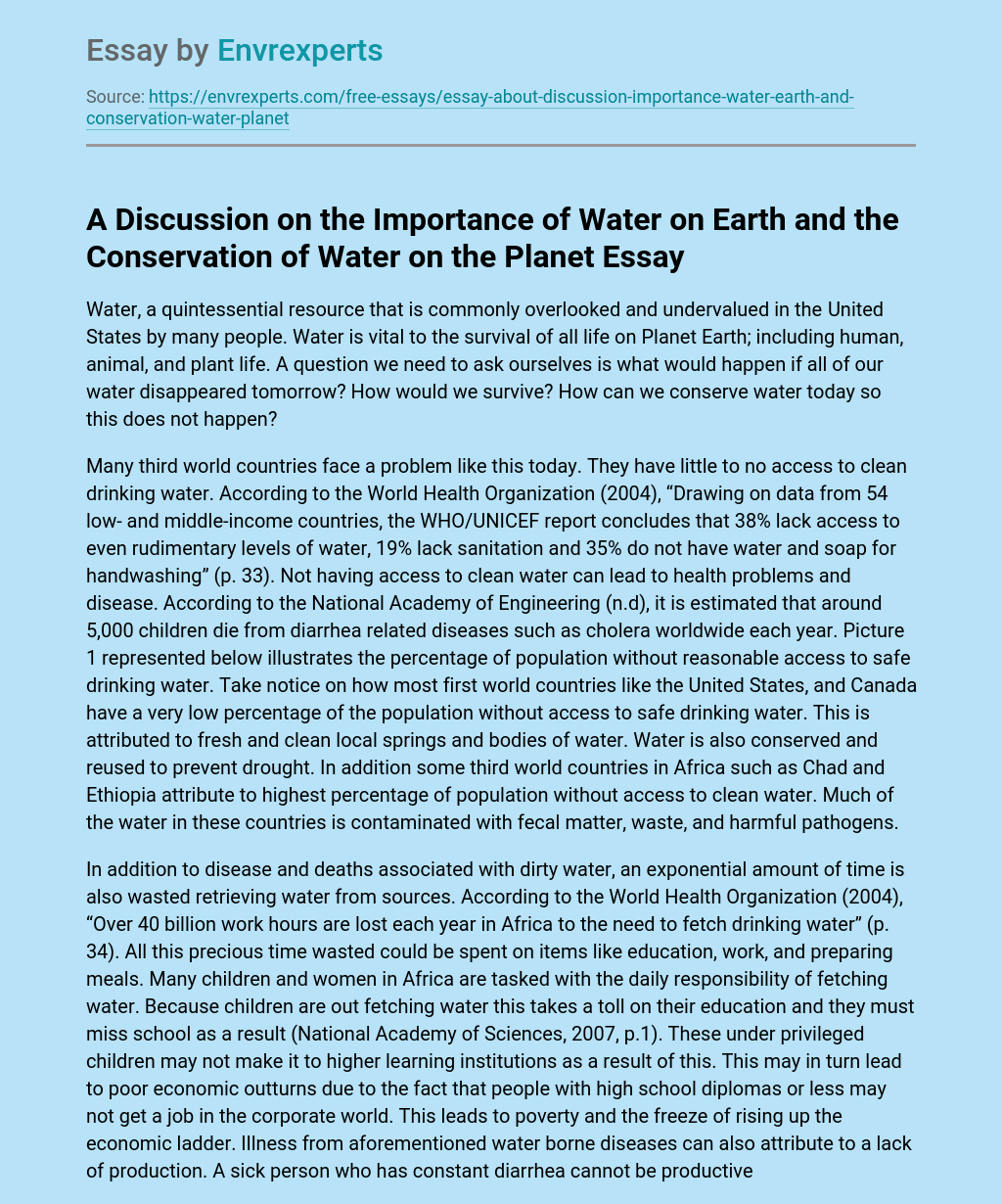