A Discussion on the Issue of Deforestation in Canada

There are approximately 2,000 million hectares of tropical forests in the world. Deforestation is happening all over the world, even in Canada. We may not notice it, but it's still here.

Many hectares are constantly being converted to other land uses, mostly for agricultural uses. Several types of deforestation occur from "slash and burn" farmers, commercial farmers, ranchers, loggers, firewood collectors, industrial developers and much more.

Forests are very important to the environment because they use carbon dioxide (CO2) and produce oxygen.

Don’t waste time
Get a verified writer to help you with A Discussion on the Issue of Deforestation in Canada
Hire writer
$35.80 for a 2-page paper

They also provide food and a home for many different types of plants and animals. For example, if there was deforestation in a certain area where many wolves live, they would be driven out of their home and be forced to live in a different habitat. That could cause the animals in the tropic level below them to die because there are more top carnivores now.

Cutting down trees is called "deforestation" and it can have serious effects.

If animals' homes, which are built in and around the trees, are destroyed, many species will become extinct and it would be a great loss. For example, several species became extinct from deforestation before the scientists could even study them.

Deforestation also affects the climate. When rain falls on a forest, new clouds are created. If huge areas of trees are cut down, clouds do not form, rain does not fall and the land becomes drier. The CO2 builds up and adds to the global warming which is making the Earth become hotter.

The reproduction of the trees is much slower than the cutting of them. Many trees were planted to replace woodland and to create forests but it has decreased the biodiversity of the plant and animal life since the plants that were planted were mostly all the same tree. Different organisms live off of different species and if you take one away, you will affect the other.

It is impossible to stop deforestation in the coming future, but there are many ways of bringing it into control and making all the side effects decrease.

Greenpeace is an organization that is funded by their own money. This group works to protect the environment. They challenge the government and the industry to stop harming the Earth by negotiating, by doing research, and by introducing new, different ways of protecting the environment. Greenpeace tries to protect biodiversity in all its forms, prevent pollution of the earth's oceans, land, air and fresh water, end all nuclear threats, and to promote peace.

What "Greenpeace's" Research Show About the Forests of Canada

The Ancient Forests of North America are extremely diverse. They include the boreal forest belt stretching between Newfoundland and Alaska, the coastal temperate rainforest of Alaska and Western Canada, and the temperate forests surviving in more remote regions.

The Canadian government's continued failure to protect endangered species violates Canada's international obligations and ignores the will of Canadian citizens.

"The Liberal Government's Plan for Endangered Species in Canada" shows how Canada is failing to live up to its international word by failing to protect endangered species. Canada first committed to protect species and their habitats at the Rio de Janeiro Earth Summit in 1992, but has failed to keep its promise, even though 97 % of Canadians support strong endangered species legislation.

What "Greenpeace's" Requests Were

Greenpeace had asked for three things to be changed for the endangered species:

There are several methods to help fix what deforestation has done to the ecosystem. Several conservation groups and the government have made zones of Canada as a "safe zone". This "safe zone" is a place where the habitat and its species are protected from loggers, hunters and other human disturbances.

Another form of protecting our forests is if the wood companies used "selective cutting" instead of "clear cutting" to get wood. Selective cutting is a method where they choose a specific tree to cut, which won't affect the ecosystem too much if it was taken out from its environment. Although selective cutting would be helpful to the environment and the lush fullness of the trees, it is more expensive than clear cutting, thus making it a less popular choice for logging companies.

Getting the public to help out in programs to help plant trees on Sundays or etc… can help the forests as well. Although it doesn't sound like a lot but if even one person planted one tree every year, it would still improve the world's forests by a lot. Improving the public's knowledge on what's happening around them would also help.

By recycling and reusing things we use everyday can reduce the amount of resources that we need, which means we won't have to use up as much and we can hopefully preserve the balance between nature and humans.

Personally my best recommendation for a solution to the deforestation is to just spend a little bit of extra money on research to find a different, better renewable resource. (Basically to see if there is an alternative to wood)

Although there are no jobs that have a name like "Deforestation Manager", there are jobs that involve deforestation. You could be a scientist and research ways of helping the forest, as explained in the solutions section, you could be an environmentalist that helps plant trees and etc, you could even be a security that guards the forest from illegal hunters and sorts.

Here is an example of an environmentalist that became famous.

Liberia is the only country in West Africa, which has retained its lush forest area. He has been working on conservation since 1977, he organized and lead Liberia's Forestry Development Authority's Wildlife and National Parks section. In 1983 he helped in the creation of Liberia's first and only national park, Sapo National Park. He founded Liberia's first and only private sector environmental conservation group, the Society for the Conservation of Nature of Liberia, in 1986. In 1989, civil war threw his society into chaos and terror. Peal was forced into hiding and then into exile, finding asylum in the USA. While in exile, he continued to fight for conservation in his home country founding the Society for the Renewal of Nature Conservation in Liberia in 1992. Within weeks of the 1997 cease-fire, Peal lead a small group, accompanied by international peacekeeping soldiers, to assess the status of Sapo National park an its surrounding communities. He returned to Monrovia in 1998 where he has continued his conservation efforts, which have pushed the Liberian Senate to ratify the United Nations' agreement on biodiversity, in 1999.

A Discussion on the Issue of Deforestation in Canada. (2021, Oct 31). Retrieved from http://envrexperts.com/free-essays/essay-about-discussion-issue-deforestation-canada 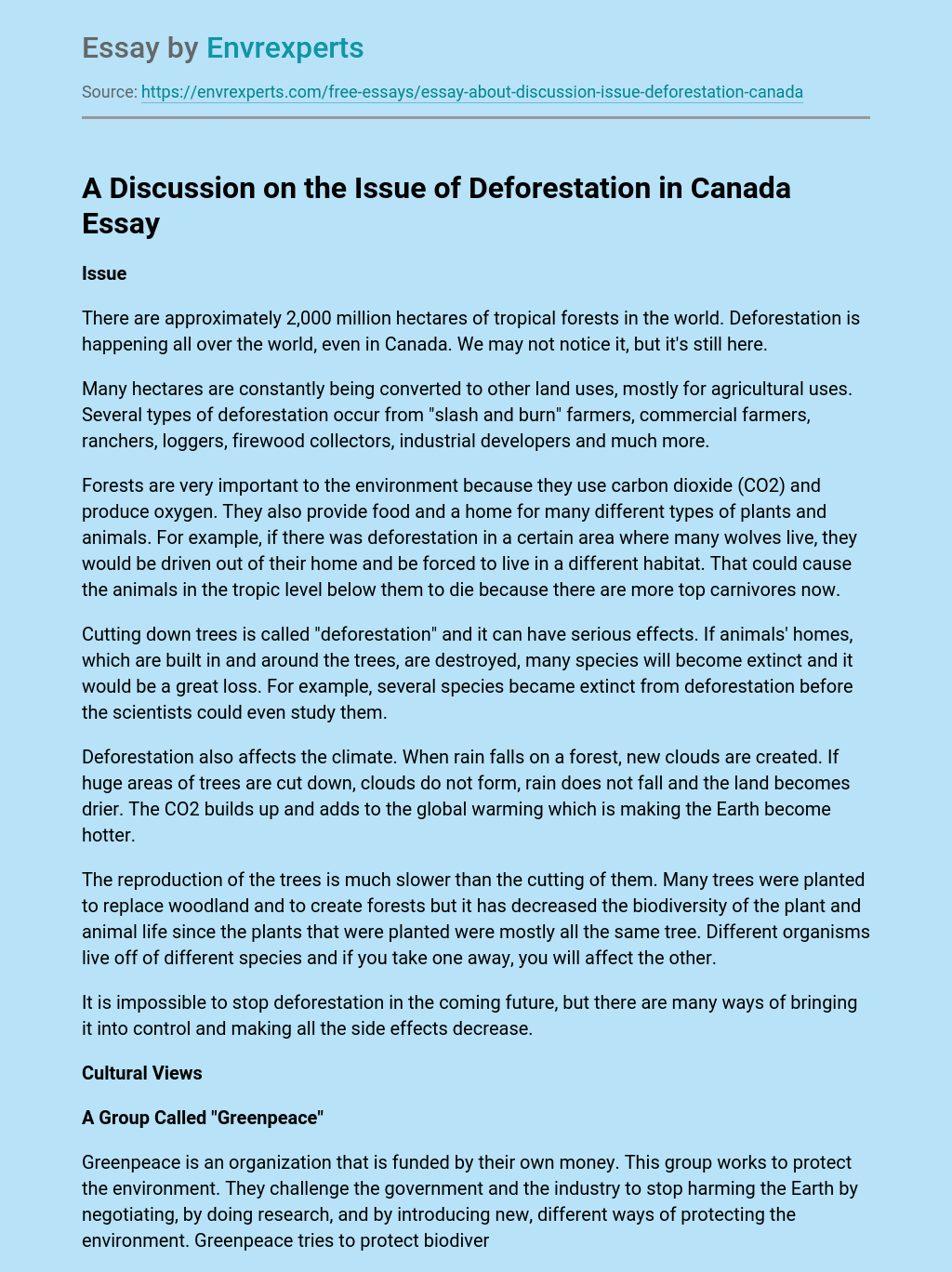