A Discussion on the Issue of Oil Spills

Oil Spills are large-scale accidental discharges of liquid petroleum products which cause pollution along shorelines. The most spectacular involved the supertankers used for oil transport, but many other ship also spill oil, and offshore drilling operations contribute a large share of the pollution. Of every million tons of oil shiped, one ton is spilled. Some of the largest spills thus far recorded involved the tanker Amoco Cadiz which spilled 1.6 million barrels of oil into the Gulf Of Mexico in 1978.

Don’t waste time
Get a verified writer to help you with A Discussion on the Issue of Oil Spills
Hire writer
$35.80 for a 2-page paper

The largest spill in the United states was the Exxon Valdez in Prince William Sound in March 1989. The spill in Alaska had a major effect on the environment and society of Alaska.

The state of Alaska is one of Americas leading producers of Oil, supplying about 20% of the countries output. All the feilds are on 105 public acres of land owned by the people of Alaska. Everyday 2.1 million barrels or 84 million gallons of oil are delivered to the town of Valdez for shiping.

In 1989 the Exxon Valdez spilled approximately 11 million gallons of oil into the sea causing one of the most environmental disasters in the United States.

Now for some background. On March 23,1989 the 987-foot tanker called the Exxon Valdez was loaded with 1,264,164 barrels of oil. The captain, Joseph Hazelwood, had set a course to go through Prince William Sound Alaska and down the West Coast of Canada Before leaving for the trip, the Captain of the Exxon Valdez went to a bar and got drunk. So Ed Murphy, the shipis harbor pilot took control.

He directed the vesselis speed and course setting and began to steer the ship out of the harbor towards Valdez Narrows. Murphy gave the controls back to the captain. As the ship reached the outer edge of the radar coverage area the captain radioed the Coast Guard telling them he was heading outward and increasing his speed. He also told them that he was going to divert from the main traffic lanes and angle left. But on March 24th, at midnight, the captain went through the wrong inbound land marker and at high speed hit the Bligh Reef. I The ship climbed 500 feet out of the water on the Reef before it stoped moving. The Captain knew he could not back the ship off the reef, so he continued to try and force the tanker to go forward, by speeding up the engines and rocking back and forth. This only caused more damage to the ship and eight of the thirteen cargo compartments were damaged with dozons of holes, some the size of a truck. Oil started to spill out everywherel(What Happened, pg.1)

At 3:19 AM at least 138,000 barrels of oil had already been lost, with 20,000 barrels escaping every hour. The Captain called in for help and was told that the ship Alyeska would be there in five and one-half hours. But help never left port until 11:00 A.M. and did not get to Bligh Reef until 2:30 PM-more then 14 hours after the accident. By 5:30 PM in excess of 240,000 barrels of oil had left the Exxon Valdez and poured into Prince William Sound. Then on March 25, nearly 48 hours later, the Exxon Baton Rouge arrived to take the remanding 1,000,000 barrels of oil from the Valdez. It took four days to empty it. Within a week 1,244 miles of shoreline was contaminated by the oil spilled from the Exxon Valdez.

The workers cleaned up over a thousand miles of coastline that had been contaminated by the oil. The best method used to treat the shorelines was hot and cold washing. On some beaches workers used high pressured hoses to get oil off the beach and back into the water where skimmer boats, sucked it up. They managed to pick up about 20% of the oil this way but had to be careful of the sea otters living on the beaches. This process used a lot of people and was a lot of tedious and consuming work.

The Alaskan sea otter was especially vulnerable to the oil because they lack a layer of insulation blubber. Having a lack of a thin layer of blubber allows them to groom themselves to prevent hypothermia which in turn causes them to consume the oil when they lick their skin. To save the sea otters the oil had to be removed by washing the sea otters with Dawn dishwater detergent and water. But the soap also removed the animals own oils making them susceptible to hypothermia. So a form of charcoal mix and water had to be tude fed to the animals. This mix helped them regain their own oil. To do this Exxon had to set up a special animal care unit just for Sea Otters which cost them over $80,000. But even after Sea Otters were cleaned most did not survive because of lack of fish.

Fishing is Alaskals number one job industry and main food source. Pink Salmon and herring are the most common fish. They are both canned and exported around the world. In 1989, following the spill, the herring population droped from a mass of 300,000 tons to 17,000 tons. The herring population was killed by a virus enhanched by the oil spill.

The Pink salmon are the basis for large fisheries and play a crucial role in the ecosystem. The adult salmon returns to spawn in small tidal areas of rivers and streams. The oil from the spill moved into the rivers and streams leaving behind oily layers in the tidal areas which contaminated the eggs and juvenile salmon. These eggs covered in oil had a death rate of 65% in 1989, and 96% in 1991 and of those that hatched many developed genetic damage. Many of the juvenile pink salmon migrated through oil contaminated areas causeing them to eat whole pieces of oil or prey covered with small particles of oil . 85% of the 1990 and 1991 pink salmon season were produced in hatcheries were the eggs and baby fish were protected from the oil spill. The 1992 season was poor and less then 10 million pink salmon were harvest. Both wild and hatchery stocks were below adverage levels.

The lost of fish become a major problem for some fisherman. For example; Ross Mullins had been a fisherman for over 30 years and has not seen a good season 1988. Prior to 1988 he received 72 cents a pound for pink salmon and after paying his works he took home around $120,000. Now Mullin is going broke trying to pay for his boat. His retirement savings are gone and his marriage is destroyed. The town he lives in has been totally destroyed because its main econmy is the fish business.

But the oil spill was not a disadvantage for all the fishermen because some went to work for Exxon cleaning up the oil spill. They were paid well for their labor. Exxon also paid them for the use of their boats and equipment. Many fishermen made two to three times more money cleaning up oil then they ever made fishing.

The state of Alaska was affected more by the spill because it produces more oil then any other state in the country. About 2 million barrels is consumed each day by Americans. From that the state of Alaska receives 85% of its yearly revenue. Exxon lost 257,000 barrels which equals 10.8 million gallons of oil into the sea of which only 32,500 barrels were recovered. Thirty percent of 77,100 barrels was evaporated while 147,400 barrels were unrecoverable. During this time the oil production in Alaska decreased drastically because Exxon could not ship the oil out of the state. In fact the worldwide petrolum idustry inflation rate went up. To this day many Americans are still paying high oil prices to cover Exxonis fines and clean up of the oil spill.

The Alasken state government received $60 million for thier help in the spill responce. About one-third went to damage assessment and to pay the 10,000 workers. The legislature approved a package of oil spill legislation that includes a $50 million spill responce fund to be tapped if spills occur in the future. They also issued orders directing the oil industry to improve tug escorts for tankers and to beef up the capabilites at Alyeska the terminals in Valdez. The state of Alaska asl suggested that the spiller should continue to be liable for the cost but the government should run the show. The coast guardis role should be increased and pollution standards should be raised.

The oil from the spill is still effecting people now in 1996, 6 years after. In alaska many fisherman are still coming up empty and are about to go into banckruptcy. Also many natives have found oil just a few inchs under the ground making agriculture diffuclt. When they complained to Exxon, Exxon did a test called iChemical Fingerprinting) which did not chemically link the oil to the spill. So Exxon claimed that it was not their oil.

The 36,000 bird carcasses recovered in the clean up were frozen in refrigerated tractortrailers as court evidence. As lawsuits were finished and the animals were to be burned. Before incineration a man named Rohwer and his team of 10 used a $50,000 National Science Foundation grant to pick through the remains and bring 1,500 birds to Seattle. Now they are being cleaned up and perserved. Some are stuffed, some were used for their wings, and others were used for their skeletons. It cost about $100 dollars to perserve each bird which can last for centuries.

The best way to prevent oilspills in the future is get the goverment to get tough on the Oil companies and make them follow the new laws. Alaska had just passed a law for double hulled tankers two year ago. Still now they have not built the double hulled tankers which are faraway. Alaska have told Exxon they need to do alot of things yet they have not done any of them.

Also another thing that can be done is a better way to clean up the oil. A long time ago they used chack and pushed the oil to the bottom. Then with the Exxon Valdez they used warm and cold washing but the best way that is just being developed now is by useing chemicals. These chemicals eat up the oil and turn the environment back to its original state.

iOil development and shiping from Valdez has given us the nationis worst environment disaster in many years. But the wreck of the Exxon Veldez was much more then an environment disaster. It also turned out to be a Ithresfold eventi for Alaskan and other Americans. It raised questions about Americals thirst for oil, about the industryis credibility and abilities, about governmentis policies and roles.I( Exxon Valdez Spill)

If the government does not enforce new rules and regulations on the oil industry spills like the Exxon Valdez will happen again with potentially significant economic consequences.

A Discussion on the Issue of Oil Spills. (2021, Oct 31). Retrieved from http://envrexperts.com/free-essays/essay-about-discussion-issue-oil-spills 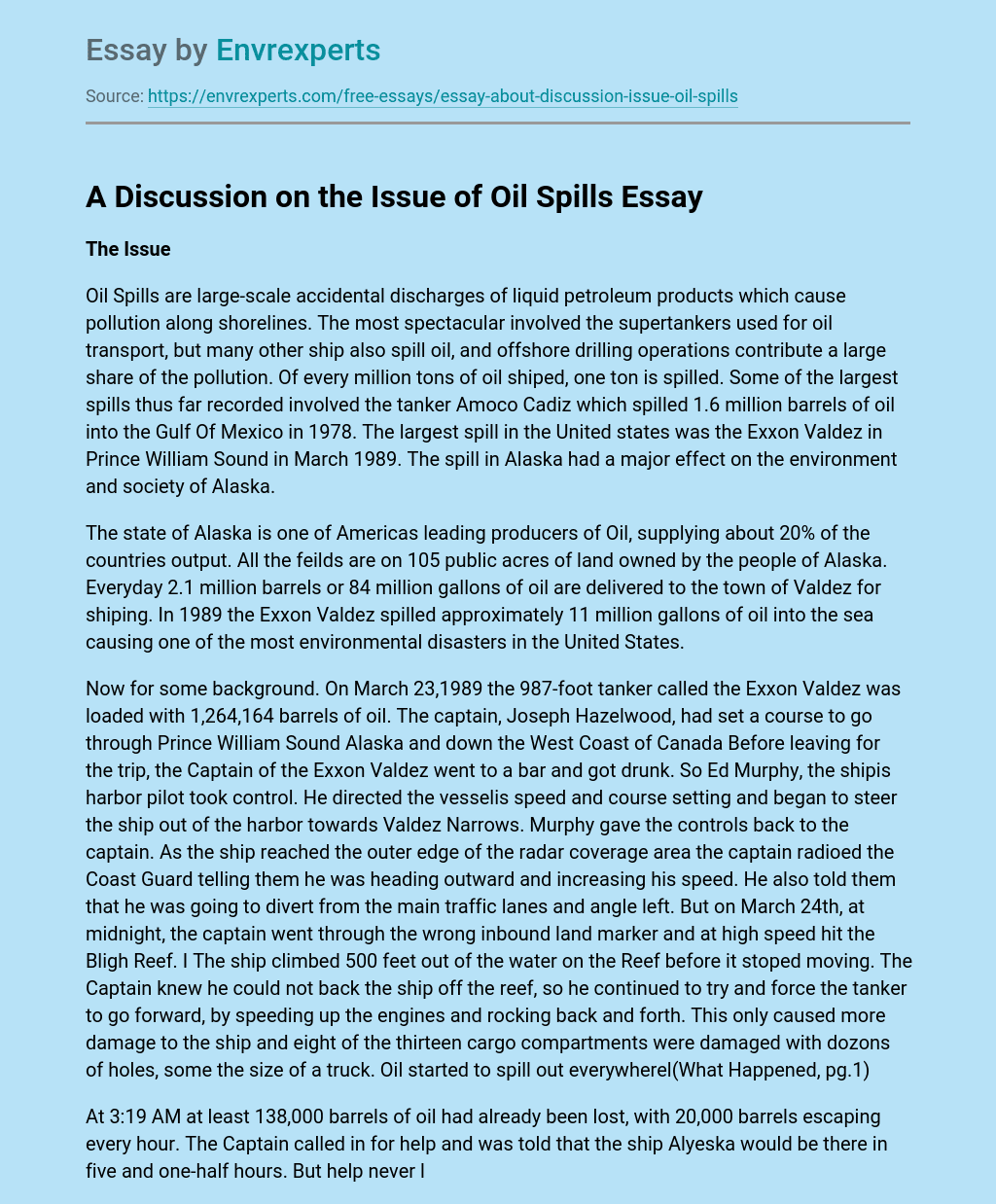