A Discussion on the Issue of Pollution in Beijing, China

There has been growing concern about the environment and what is safe and not safe. "Several new programs aimed at protecting the environment and human health, have been initiated under the 1990 Amendments to the clean air act" (Chicago). But what is it exactly that is really wrong with the environment? Well, it's the people who need to get around using things such as cars that give off pollutants into our atmosphere. The wants and needs of society grow mainly because of population expansion and a growing desire for a more comfortable life.

Don’t waste time
Get a verified writer to help you with A Discussion on the Issue of Pollution in Beijing, China
Hire writer
$35.80 for a 2-page paper

But is the U.S. only dealing with this?

Beijing has been proven to be the world's smoggiest city. The air has diminished so severely that Premier Zhu Rongii and other top leaders have made major cleanup measures. Tiny little vans called an Miandi have been one of the major causes of poor air quality. Although they call for less than 2% of the more than 1.

4 million vehicles, they are the sources of 8-10% of the pollution because of their auto gases. The other factors of pollution in Beijing are the restaurants and businesses that use coal to fuel their stoves (Beijing).

However, the question is not what caused the pollution but how we will stop it. There are 2 good answers for Beijing. One is to convert the coal burning stoves into stoves that use cleaner fuels. The second is a company that is trying to crack down on pollution called Capital Steel. Capital Steel has been a long-time target of environmentalists and by 2003 they plan to spend $100 million on pollution prevention (Beijing).

On the other hand, in the US the Environmental Protection Agency has been enforcing air pollution standards on S.U.V.s, pickups, and mini vans. The effects of these standards are the rising costs of motor vehicles. The EPA had estimated that these standards will increase the cost of cars on average $100 and trucks about $200 (Trucks).

There is a problem however, with creating cars that give off non pollutant materials. This gasoline additive, MTBE, has seeped through into nearby wells and has forced and has forced them to close. The result of this is that millions of dollars have been spent in the cleanup costs (Gasoline).

In conclusion, I guess you could agree with me when I say the world, we live in is far from perfect. Things will be proven to be harmful and there will be ways to save us at the mere cost of millions. The reason that air pollution is important is that it shows not only the U.S. is cracking down on pollution prevention but the rest of the world is too, not to mention the hundreds of millions of dollars that are being spent because of the tragedy of the commons.

A Discussion on the Issue of Pollution in Beijing, China. (2021, Oct 31). Retrieved from http://envrexperts.com/free-essays/essay-about-discussion-issue-pollution-beijing-china 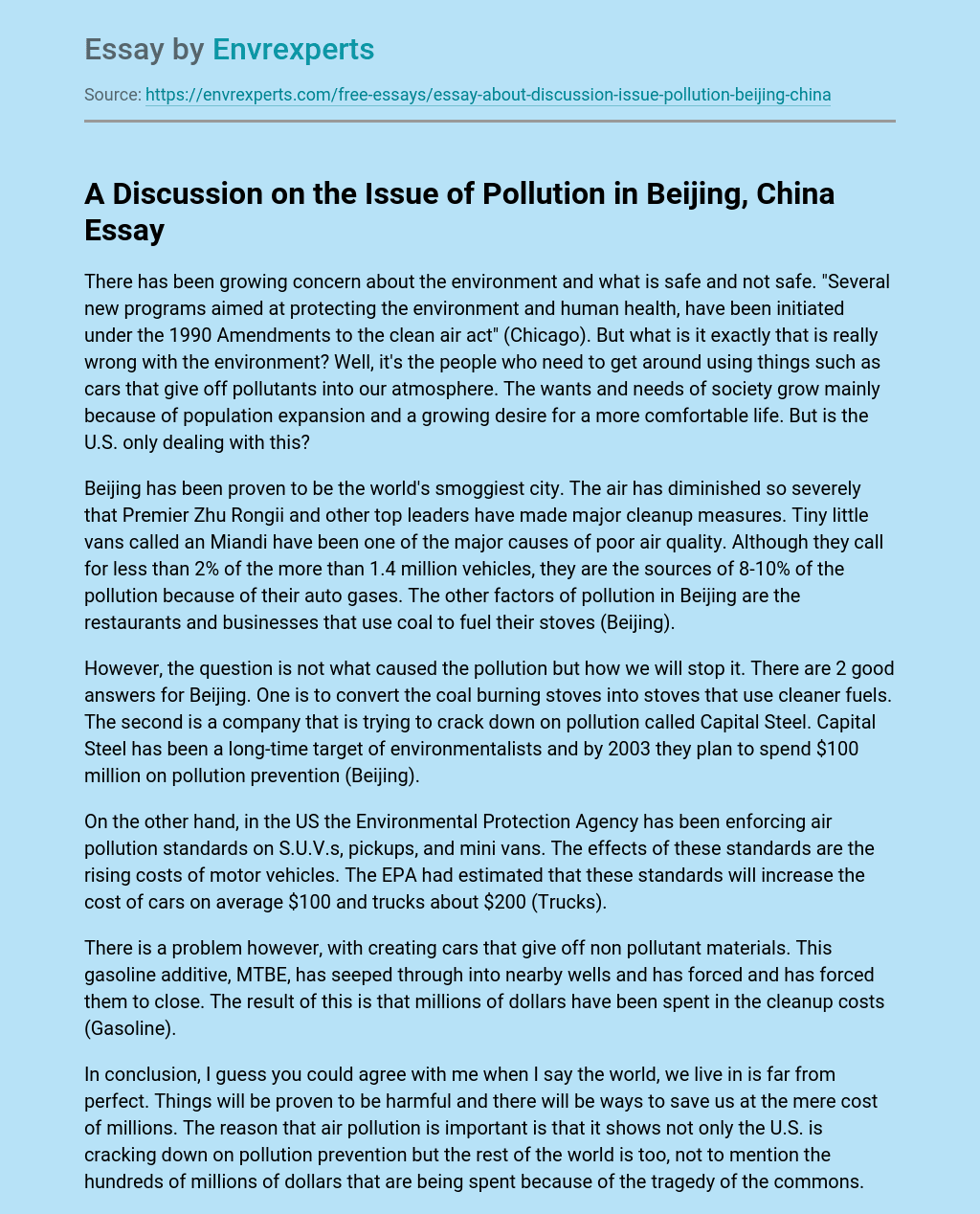