A Discussion of Greenhouse Effect

By definition, the greenhouse effect is a term for the role the atmosphere plays in insulating and warming the earth's surface. In modern society, this is the term for something better known as global warming. The earths climate is predicted to change drastically in the next century due to human activity. As the population of the world increases, so does the anount of greenhouse gasses produced. These include mainly carbon dioxide, methane, and nitrous oxide.

Methane som the decom tural and in Carbon dioxide is released to the atmosphere when solid waste, fossil fuels (oil, natural gas, and coal), and wood and wood products are burned.

Don’t waste time
Get a verified writer to help you with A Discussion of Greenhouse Effect
Hire writer
$35.80 for a 2-page paper

Methane is emitted during the production and transport of coal, natural gas, and oil. Methane can also come from the decomposition of organic waste and livestocks waste (cow poop). Nitrous oxide is emitted during agricultural and industrial activities, as well as during burning of solid waste and fossil fuels. (http://www.epa.gov/globalwarming/).

Light energy comes through the earths atmosphere and is absorbed. It is then transformed into heat energy at the planet's surface. This heat energy then radiates upward into space. There the greenhouse gases found naturally in the troposphere absorb some of the infrared radiation. The gases insulate the Earth, but do eventually allowing some of the heat to escape. The rest of the heat reflects back down to earth where it is bounced back up again. Almost like an ongoing game of pingpong. With more of the greenhouse gasses being let out into the atmosphere, there are more pingpong balls going back and forth.

Granted, without these greenhouse gasses, the earth would almost freeze and fall into another ice age, but with all this extra heat, the average temperature of the earth will rise causing drastic damage.

What sort of damage you ask? It is predicted that the earths average tempature could rise as much as 6 F in the next hundred years. (Encarta 2000) If this does happen, precipitation will increase causing rising sea levels. This alone will be drastic to soociety, but the indirect results could be even more devestating than just flooding. World climates would change tremendously, possibly increasing precipitation adding to the flooding effect. This would also affect crops around the world. Salt water would pollute fresh water wells that millions of people use for drinking water. Just a 1 foot rise in sea level can cause shorelines to recede a hundred feet, and in flat terrain, more than a thousand feet. Within the next century in America, oceans will cover the Florida Keys and much of Florida, and southern Louisiana.

In the Southern Hemisphere, the warming is the greatest over Australia, southern South Africa, the southern tip of South America, and the area of Antarctica nearest Australia. In the northern hemisphere, warming is strongest in Alaska, northwest and eastern Canada, most of the Soviet Union, and parts of southern Asia, North Africa and south west Europe. Climate has cooled in Great Britain and northern and eastern Europe. In the USA, scientists found no overall warming trend in weather records kept since the nineteenth century, however keep in mind the US covers only 1.5 percent of the earths surface. As this warming trend continues, every place on the earth will be effected. ( Worldbook online). Entire continents could, and probably will be buried under oceans.

The global warming rate is estimated to be going 80 times faster than it has in past years. At that rate, our great great great great grandchildren will not have a dry playground to run around on. Waterworld? Maybe not now, but someday we may be living in the Hollywood movie.

A Discussion of Greenhouse Effect. (2021, Oct 31). Retrieved from http://envrexperts.com/free-essays/essay-about-discussion-of-greenhouse-effect 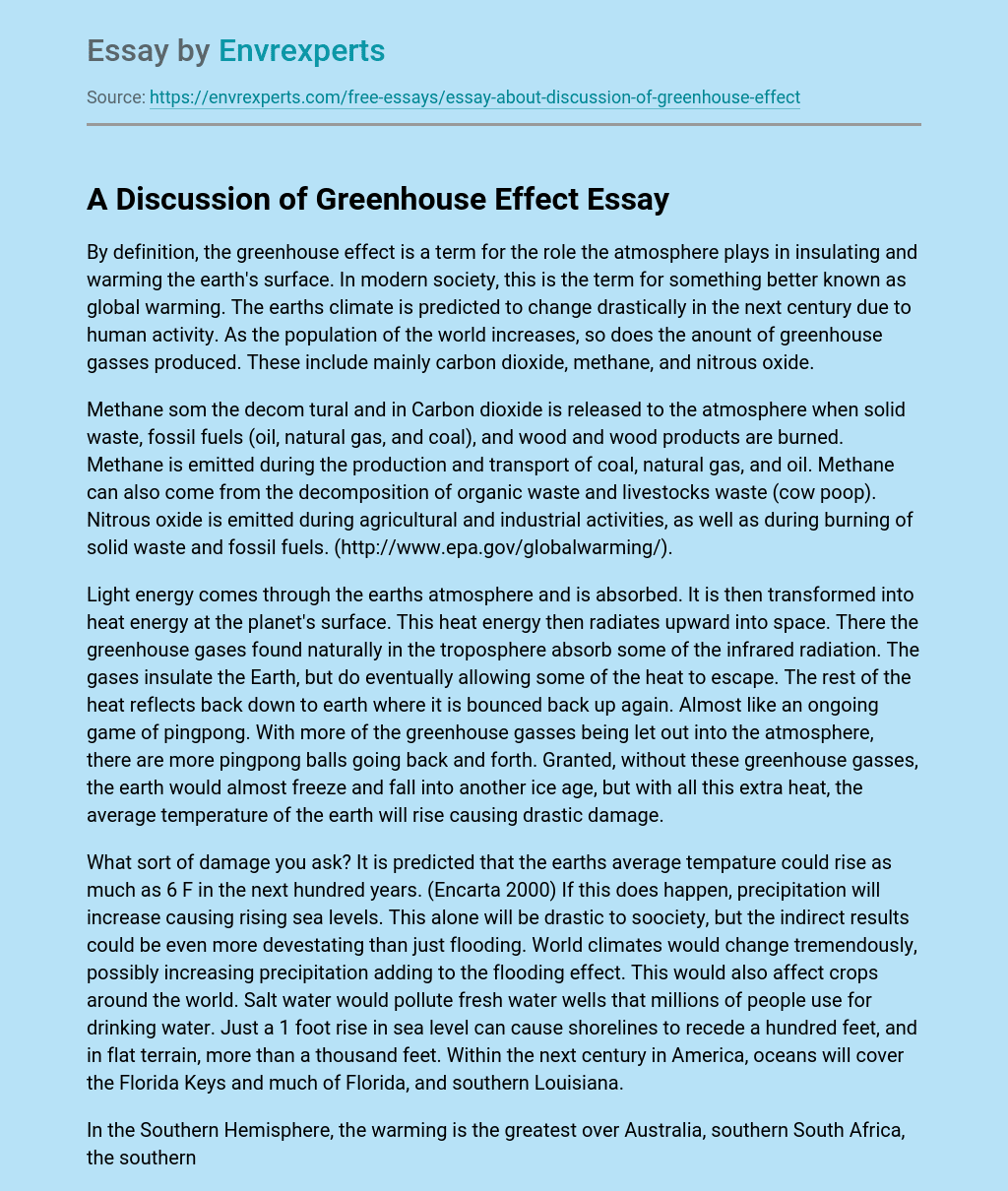