A Discussion on the Problems Causes by Air Pollution

Some people think that air pollution is not harming the earth or the people, but it is doing worse, by killing the earth and getting people sick. 'Air pollutants,' according to Gay, 'are known to cause respiratory diseases, cancer, and other serious illnesses' (12). Air pollution not only threatens the health and life of humans but also causes damage to the environment (Gay 13).

Don’t waste time
Get a verified writer to help you with A Discussion on the Problems Causes by Air Pollution
Hire writer
$35.80 for a 2-page paper

In the United States many health problems have occurred because of air pollution. According to Sproull, 'For more than a decade, local residents in the tri-state valley bounded by Kentucky, Ohio, and West Virginia have claimed to suffer from health problems, including rashes, respiratory problems and even cancers' (D4). In 1948, in the industrial town of Donora, Pennsylvania, which sits in a valley, had twenty deaths, and nearly 6,000 residents, or 40% of the population, suffered respiratory problems (Edelson 25, 26).

New York experienced several killer smogs, which in a later analysis attributed, from the usually severe pollution, 58 deaths (Edelson 26). Not only in the United States are health problems caused by air pollution showing up, but they are also showing up in other parts of the world, like Europe. In 1930, in Belgium's Meuse River valley, a major industrial region, where the primary fuel was coal reported sixty deaths, and about 6,000 residents of the valley became ill with breathing problems and respiratory infections (Edelson 25). In December 1952, the toll was huge in London from the infamous smog, which caused up to 4,000 deaths, when levels of sulfur oxides and particulates rose above normal (Edelson 26).

Also, air pollution causes a great deal of damage to the environment and property. Lot of air pollution creates acid rain, which deteriorates things. Acid rain began to emerge as a serious problem in the late 1960's, when a decline in fish population was noticed by scientists in Scandinavia (Edelson 37). In the 1970's, a number of studies related the declining of fish stocks and forest damage to acid rain from industrialized and urban areas, often hundreds of miles away (Edelson 37-8). Thousands of lakes and streams, across the northeastern part of the United States and the mid-Atlantic states, in Canadian provinces, in Scandinavian countries and in other parts of Europe, have acid concentrations so high that aquatic food chains are destroyed, and fish die off (Gay 26). Land is also destroyed by acid rain. In North American and European forests, and tropical rainforests in Mexico and Central America, vast numbers of red spruce, pine, fur, and other trees wither and die (Gay 26). Acid rain also destroys world-famous structures such as the Taj Mahal, the Statue of Liberty, the Parthenon, and ancient Mayan ruins (Gay 26). Fresh paint on buildings and new cars fades quickly due to acid rain (Gay 26). Acid rain may also be damaging crops (Edelson 42). Dust settling, from nearby dust sources, also cause damage to crops (Sproull 111). Visible damage is cause by such heavy dustfall to pine trees, alfalfa, cherry trees, beans, oats, and citrus trees (Sproull 111). Concentrations as low as only a few micrograms per cubic meter of 'fluorides' injure various plants (Sproull 112). Dusts of aluminum fluoride, cryolite, calcium fluoride, and apatite, and such gases as hydrogen fluoride, silicon tetrafluoride, carbon tetrafluoride, and fluorine are all included as fluorides (Sproull 112). Trees are dying because of air pollution. The German Ministry of Food, Agriculture, and Forestry say that the primary cause of damage to more than half of forested regions of West Germany in 1988 was air pollution (Edelson 37). Ponderosa pine forests have been severely damaged by air pollution (Sproull 111). Artwork and history is being erased as air pollution causes them to deteriorate (Edelson 45). The Mellon Institute had study of economic losses in Pittsburgh in 1912-13 due to air pollution, indicated annual losses about $10 or $20 million per person (Sproull 46-7). Air pollution is killing the environment and property.

In conclusion, air pollution is killing the earth and its people. In order to stop the killing of the earth and its people by air pollution, the people must become involved. A recent strategy that has been suggested for individual action is 'green consuming' or buying 'green' products (Gay 120-21). Green consuming is buying or using goods and services that do not harm the air, water, or land (Gay 121). Even though a large majority of Americans refuse to buy products or pay for services that contribute to environmental problems, people should still get involved (Gay 121). In order to save energy to save the earth, people should do the following:

When the lights are not in use, turn them off.

On a short trip, walk or ride a bike.

Whenever possible, use public transportation.

To conserve heat or air conditioning, close off unused rooms.

To save fuel, adjust thermostat a few degrees lower for heating and higher for cooling.

Only when full, run the dishwasher, washer, and dryer. (Gay 115)

A Discussion on the Problems Causes by Air Pollution. (2021, Oct 31). Retrieved from http://envrexperts.com/free-essays/essay-about-discussion-problems-causes-air-pollution 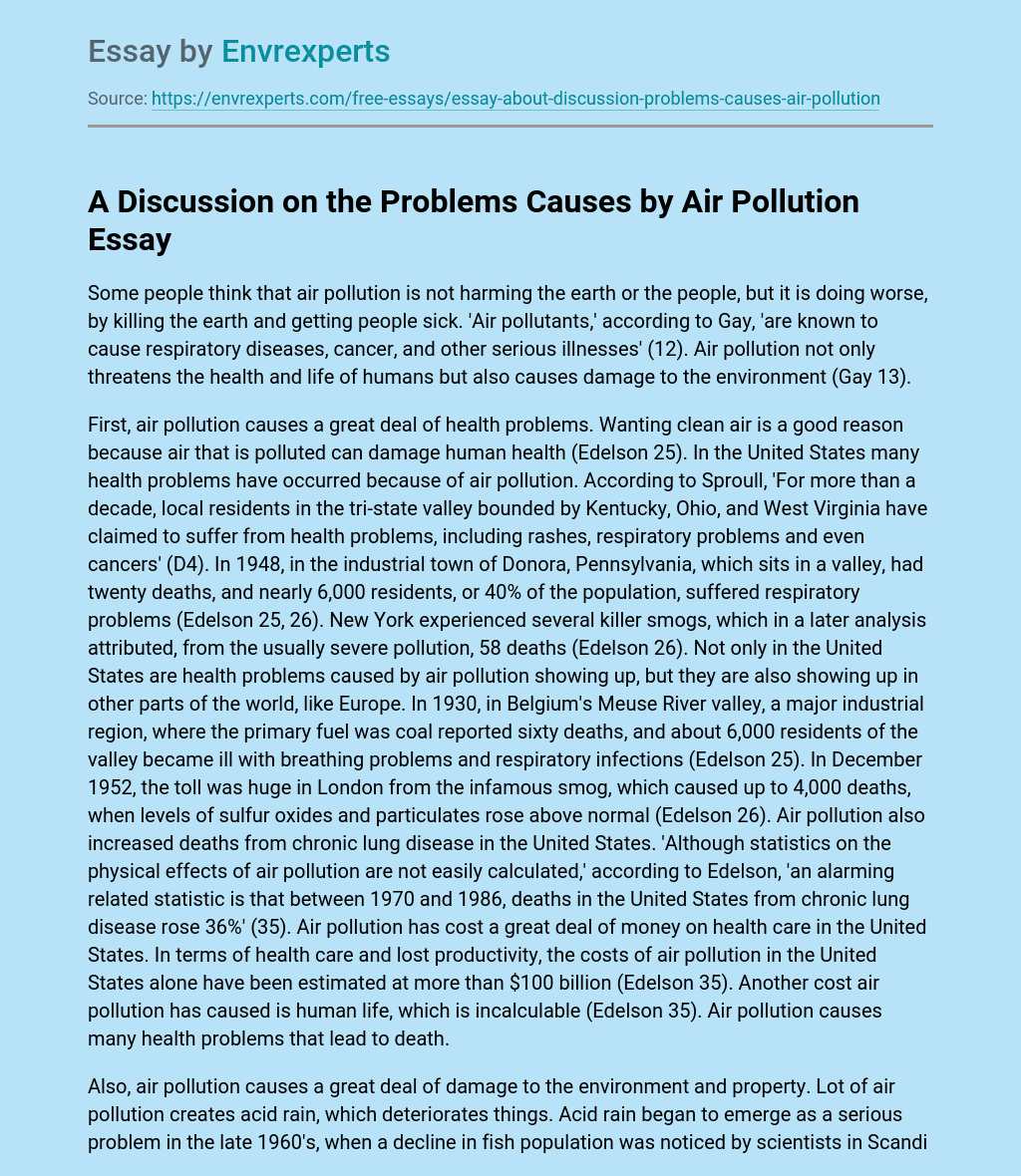