Ever since environmental preservation arose as a hot button topic of discussion, critics have blamed Christians and their worldview for being detrimental to the cause. However, if they were to really do their research on the worldview of Christianity, they would find that this is not the case. There are many points of view from different denominations of the religion on who the Earth belongs to and what the proper actions to take towards preserving the environment are. The Utilitarian viewpoint and the Gnostic viewpoint are the two most prominent.

Don’t waste time
Get a verified writer to help you with A Discussion on the Role of Christians in Keeping the Environment Safe
Hire writer
$35.80 for a 2-page paper

Christians as a whole are very committed to keeping the environment safe and preserved for future generations. The Earth is a gift from God that we have a duty to protect and maintain.

The Utilitarian point of view proclaims that the Earth is ours and we are to do what we want with it. This is a very for-profit mindset that has been challenged in Christendom many times over. Utilitarianism is what many of the secular critics of Christian worldview condemn due to its seemingly uncompassionate agenda.

James Watt was one of the primary proponents of the Utilitarian worldview. "he made clear that he viewed earth as “merely a temporary way station on the road to eternal life… The earth was put here by the Lord for His people to subdue and to use for profitable purposes on their way to the hereafter." [Dewitt Nash] Watt sees the world as a waiting room of sorts, where we must make the world as profitable as possible until we die and go to our permanent place of living, Heaven.

While Heaven is the ultimate goal, Watt's views are very distorted and have been refuted by many, including Susan Bratton. “His philosophy of management stems largely from economic and political considerations,” [Dewitt Nash] she proclaims. To view the Earth as an economic and political place, from a Godly point, is wrong. “Apologists have had to remind critics within Christendom that the earth and everything in it is the Lord's and that the earth has other purposes than merely serving human needs.” [Dewitt Nash] Bratton's counter of Watt's views is the way that most Christians view the Earth and its preservation. Even God proclaims the Earth as his own for us to take care of, but ultimately it is his gift to us. We must honor him and care for it how he says to. "The earth is the LORD'S, and all it contains, the world, and those who dwell in it. For He has founded it upon the seas and established it upon the rivers.” [Psalm 24:1-2]

The next prevailing point of view in the argument towards Christian's deep love for the Earth is the Gnostic point of view. "Another challenge from within is a dualistic view that teaches the separation between matter and spirit, while arguing that the material world is evil. Christian apologists counter this notion with New Testament texts that affirm matter in the incarnation and resurrection of Jesus, the resurrection of the body, and the reconciliation of all things to God.” [Dewitt Nash] The Gnostic viewpoint teaches the separation of material and spirit. They proclaim the Earth is not ours and that we are to care for it for God. We are the stewards of the Earth. The Gnostics however, believe that material possession is evil and we are to focus solely on the spiritual aspect of our existence.

There needs to be a middle ground between the Utilitarian viewpoint and the Gnostic viewpoint. We must preserve the Earth for the future and do the Godly duty we are commissioned to do, but we are also free and should enjoy all of God's creation that he has bestowed upon us. The important thing to remember is that the Earth belongs to God. “According to Old Testament scripture, humanity has a special place in this creation, which has sometimes both historically and currently been interpreted as being a license for humans to exert a mastery over all over creatures and the planet.” [McDermett] This is only partially true. We are to be masters over creation, but to treat it with respect. The Bible clearly states that we have dominance over the creatures of the Earth, but we must use that power for good and not for personal gain or evil.

The Vatican itself has condemned the horrible pollution epidemic we have been facing over the years. “At the highest level of the Roman Catholic church concern for the environment and recognition that climate change is a major threat to both the planet and humanity has taken hold.” Some instances of how the Vatican has changed for the greater good of the environment are: Installing solar panels on buildings, planting non GMO crops, and going completely carbon neutral. The Vatican is an example for many Christians to follow. Many members of different clergies have changed their way of life in order to benefit the environmental cause. "Richard Chartres, the Bishop of London, captured headlines by suggesting that making selfish choices such as flying on holiday or buying a large car are a symptom of sin.” [White] While that may be an over exaggeration, it shows the dedication to the Earth that some Christian clergymen have. "Fathers such as Benedict, the sixth-century founder of monasticism who propounded a gentle attitude to nature and to animals.” Benedict was one of the early believers in environmental respect and love. Christians have come a long way from making animal sacrifices.

The main cause for concern in the environment today is the problem of pollution. We have an extremely populated Earth and far too much waste. “Pollution is one of the biggest global killers, affecting over 100 million people. That's comparable to global diseases like malaria and HIV.” [Do Something.org] The many things that Christians and all others alike can do to help are simple, but are not part of the daily routine of many. These tactics include; shutting lights off when leaving the house, driving fuel efficient cars, combining trips and carpooling, and making strides towards reducing your carbon footprint.

While there are many Christians who are for the environmentalist movement, there are many against it as well. "Others may argue that protecting the environment is unimportant in comparison to other God-given tasks such as sharing the gospel. But God is concerned with the physical world as well as the spiritual world, and restoration of the creation is part of the good news of Christ.” [Geneva College] I, for one, believe that part of spreading the Gospel is preserving the Earth. It shows great respect for God and creation.

In conclusion, there are many ways to spread the glory of God. We must understand that the Earth has been given to us as a gift to preserve and to treat with respect. Contrary to popular belief, Christians are the definition of environmentalists. They believe in creating a better world for their children and generations to come. They do this by spreading the good word of God, while setting a moral example for many and all. “We worship God the Creator more fully as we see His glory in his creation and as we participate in His work of sustaining and restoring proper relationships within the creation.” [Geneva College] To participate in life is to experience the Earth we live on and to make the most of it. But, unlike the utilitarian point of view, we should not work towards profitability whilst decimating the Earth we depend upon to sustain life. It is our calling as Christians and it is our calling as members of the human race, environmentalist or not, we can all still do our part to make the world a better place.

A Discussion on the Role of Christians in Keeping the Environment Safe. (2021, Oct 31). Retrieved from http://envrexperts.com/free-essays/essay-about-discussion-role-christians-keeping-environment-safe 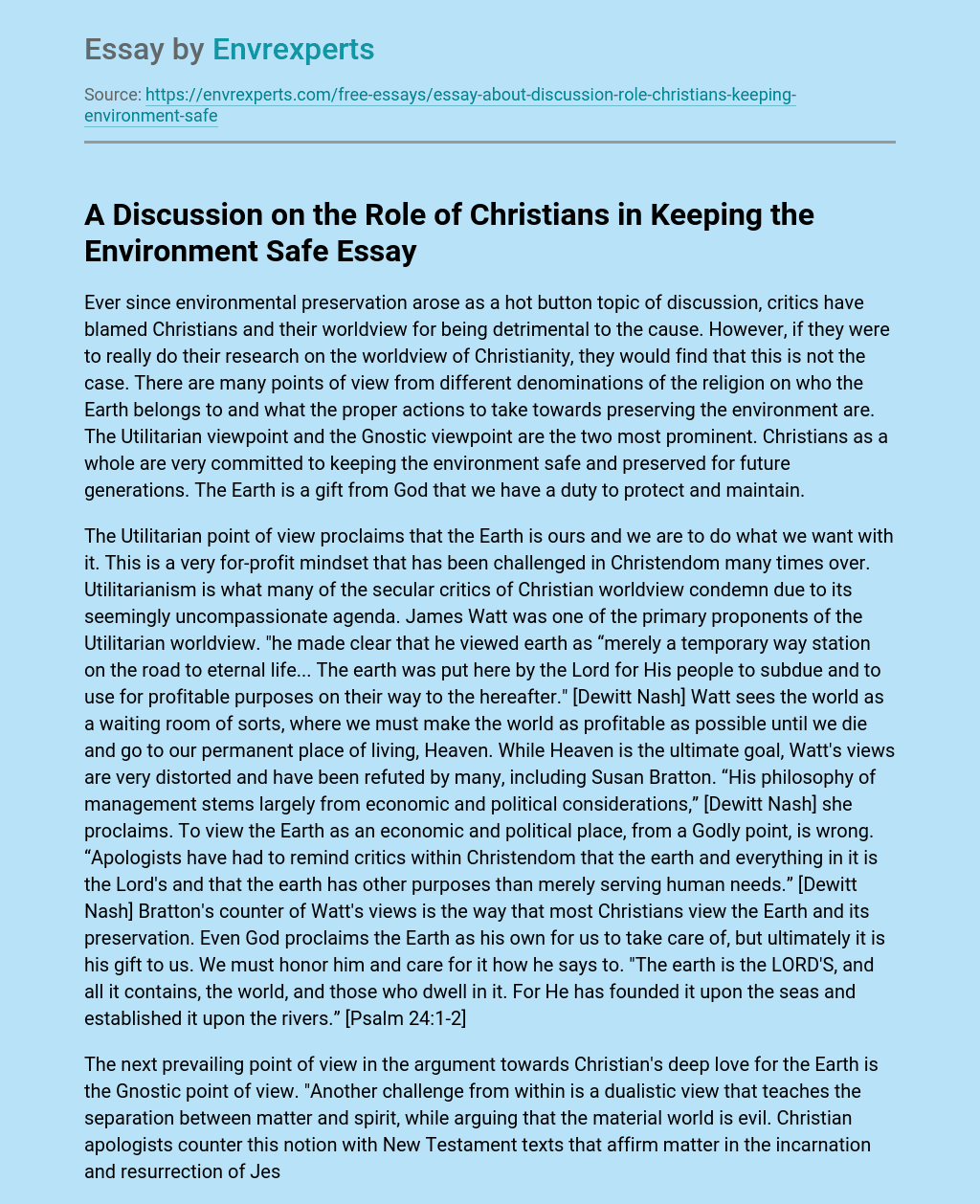