Human’s life is becoming harder every day because of the increasing obstacles that prevent it from proceeding. The question whether the humans will survive into the next millennium is a very controversial issue. People have different points of view on this issue; some of them believe that humanity can survive and others don’t. However, in a more realistic point of view, by looking at the increasing gap between mortality rates and life expectancies, one can easily see that life on earth will not last for a long time.

Don’t waste time
Get a verified writer to help you with A Discussion on the Threats to the Existence of the Human Species
Hire writer
$35.80 for a 2-page paper

There are many obstacles that interfere with humanity survival in the future but the most significant ones are the spread of disease, natural disasters and the diminishing resources. Therefore, humanity will not be able to survive the next thousand years.

One of the main threats on human life is the spread of disease all over the world. The number of diseases is increasing day after day due to three primary reasons which are pollution, the use of chemicals, and wars.

Nowadays, there are many industries around the world that dump their toxic wastes in the surrounding environment and this may lead to very dangerous types of pollution. When these industries dump their toxic wastes in water, it pollutes the water which might be used for many purposes by humans later on. Humans will then eat the fishes in the water, drink the water, or use it for agriculture purposes. Water pollution can cause a lot of dangerous diseases such as cholera and typhoid fever.

Moreover, the transportation methods that we daily use are the main reason of air pollution. Cars, ships, and airplanes work on fossil fuel which are then burnt and emits very toxic gases. Air pollution could cause dangerous breathing diseases such as asthma and emphysema. In general, pollution can cause plenty of diseases that may lead to death at the end. As a result, pollution constitutes an obstacle in human survival in the future. The second reason that causes the spread of disease is the overuse of chemicals in most of our daily life products. According to Chris Fountain (1993) in the past, people used to live longer because they depended on organic products in their daily life which were free from chemicals. They also used natural sources to get their medicine, food, and water and they tended to have good health (p.1). Nowadays medicine, drinking water, and even food involve some sort of chemicals. Most of the medicine used nowadays is completely made from chemicals which treat one problem and later on causes many other problems known as the side effects. Moreover, the water that we daily drink is purified using chemicals and these chemicals have a negative effect on our health in the long term. Also, food nowadays includes plenty of chemicals in it which are very dangerous for human health. For example, "Peanuts and some grains can be contaminated by aflatoxins, a group of four chemicals known to be potent liver poisons" (Fountain, 1993, p.2). The third reason is wars which not only involve large number of mortalities but also causes diseases and infections that may lead to death. According to Austin and Mckinney (2012), many studies proved that wars are directly related to the rapid spread of Aids (p. 422). HIV or Aids is a very dangerous infection on humanity which caused a large number of deaths until now. Wars nowadays and in the future may involve nuclear weapons which have a huge negative effect on both environment and humans. These nuclear weapons have an immediate destructive effect on humans and environment and also a long-term effect which is due to Uranium radiation. This radiation can cause plenty of diseases including cancer; it could destroy human brain's cells which could be fatal.

In order for humans to survive into the future, they must have sufficient resources to meet their needs for living. Unfortunately, the world population is continuously increasing while the available resources are continuously diminishing. Energy resources are very important for human's life to proceed because almost everything in our life needs energy to work. For example, most automobiles work on fossil fuel energy and the number of used automobiles around the world is increasing continuously. Moreover, a large portion of the available fossil fuel, almost 80 percent, in the world is being used for food production purposes every year (D. Pimentel & M. Pimentel, 1998, p.58). Fossil fuels have finite resources and due to the overpopulation of the world, this type of resources is being over consumed. Therefore, energy sources like fossil fuels are at risk of exhaustion in the near future. Water resources are encountering the same issue because they are also finite resources. Water is used for many different purposes other than drinking, such as agriculture and electricity production. Therefore, lack of water means lack of everything; in other words, life is impossible without water. "In fact, agriculture production consumes nearly 70 percent of the world's fresh water supply, which means this water is not available of other uses, including human use" (Pimentel, 1998, p.58). Moreover, natural food resources are being over consumed due to the overpopulation in the world as well. According to Pimentel (1998), the population of the world is increasing by 1.5 percent annually. Meaning that, the world's population increases 250 thousand people per day. Therefore, supplying this quickly increasing population with sufficient food is very difficult (p.57). Many countries in Africa are suffering from lack of water and food which results in a lot of deaths in these countries every year.

A Discussion on the Threats to the Existence of the Human Species. (2021, Oct 31). Retrieved from http://envrexperts.com/free-essays/essay-about-discussion-threats-existence-human-species 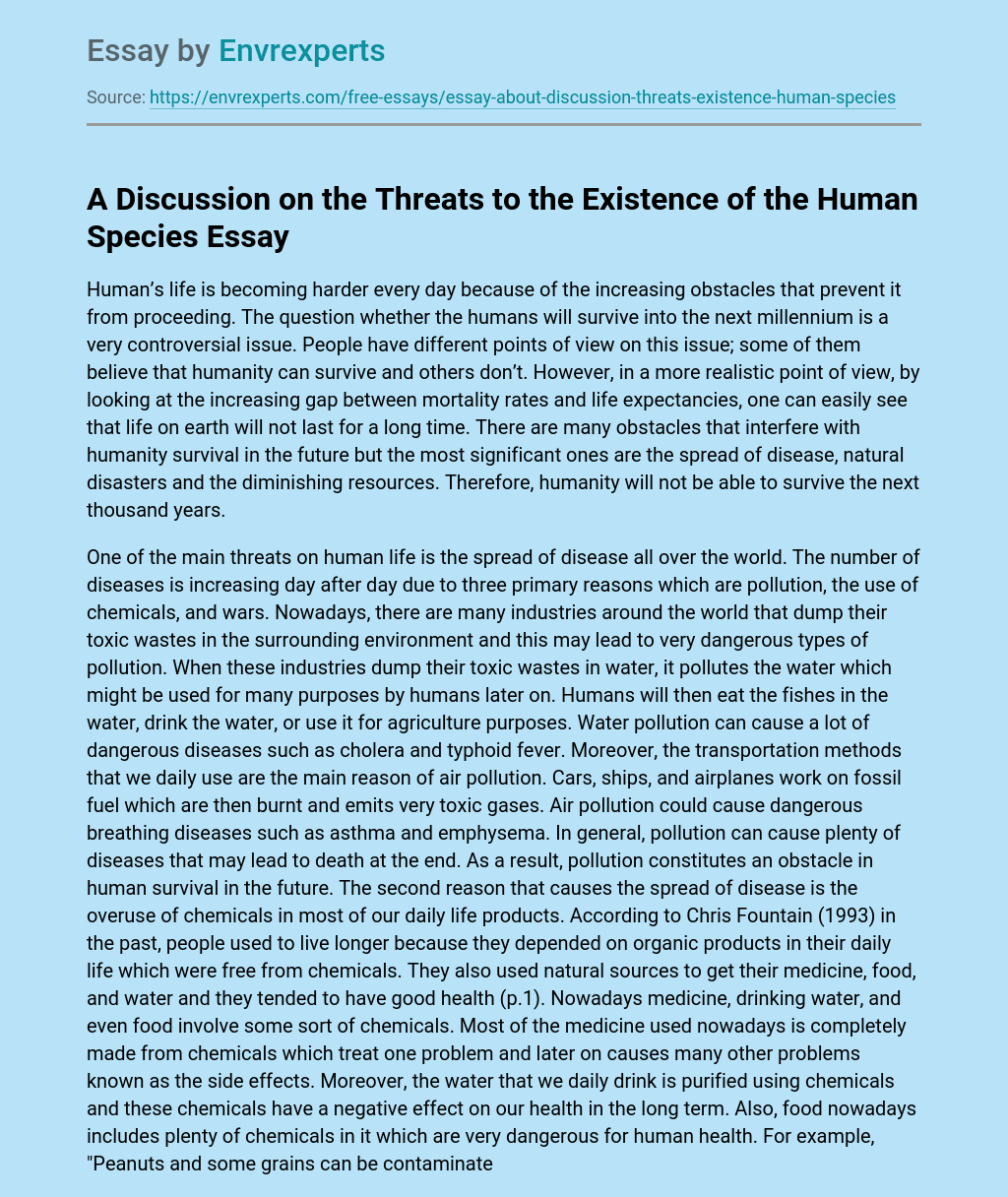